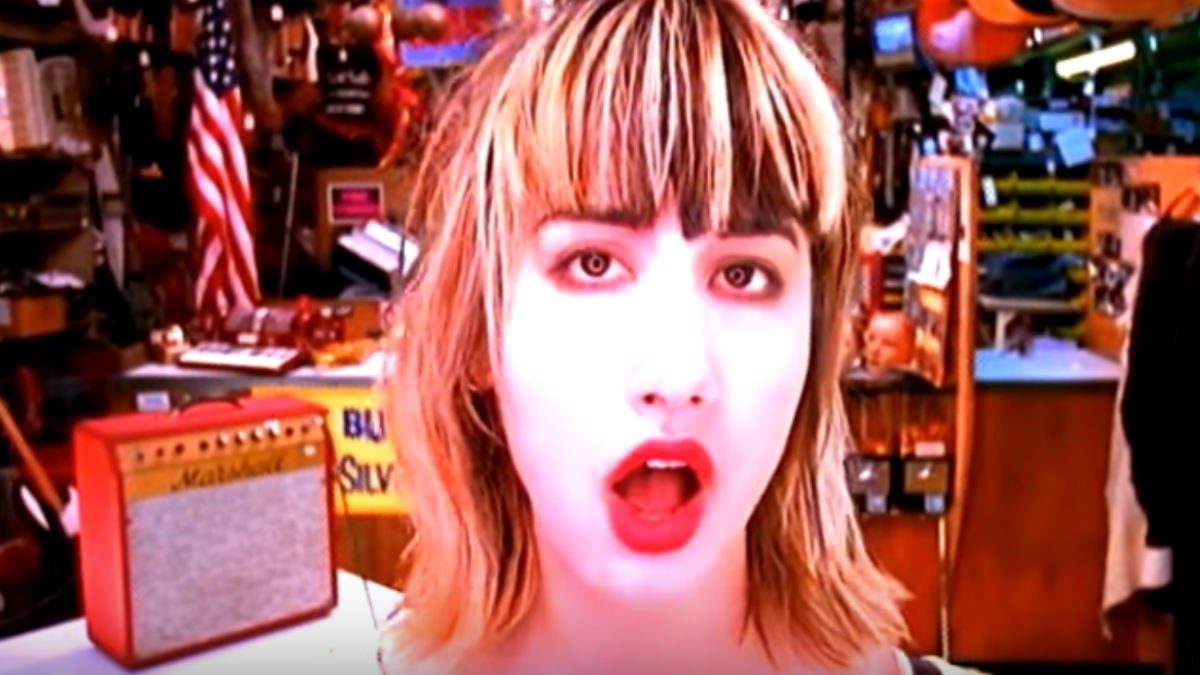 400. “Sad Tomorrow,” The Muffs. Songwriter: Kim Shattuck; Did Not Chart; 1995. The Muffs were a three piece L.A. punk band fronted by Kim Shattuck, who had been a member of the garage rock revival outfit The Pandoras in the 1980s. The Muffs may be best known for their cover of the 1980s electronic bubblegum classic “Kids in America,” but had their best melody meets punk rock moment with the barely over two minutes bad relationship number “Sad Tomorrow.” Lars Gotrich of NPR, “Shattuck’s gritty rasp and love for ’60s pop music sounded like nothing else on ’90s alternative-rock radio. ‘Sad Tomorrow’ perfectly illustrates Shattuck’s hooky pop-punk prowess and vintage-store chic. From the first ten seconds, you always knew it was a Muffs song. Shattuck screamed so sweetly, so savagely — and looked damn cool while doing so. Shattuck was a force of life who splashed vibrant colors onto punk, in songs both tough and vulnerable, with big power chords and bigger feelings about heartbreak, broken worlds and righteous anger.”

399. “Regret,” New Order. Songwriters: Bernard Sumner, Peter Hook, Stephen Morris, Gillian Gilbert, Stephen Hague; #28 pop; 1993. New Order took a four year break from 1989’s “Technique” album to 1993’s “Republic,” but weren’t forgotten by the public. “Regret,” the first single release from “Republic,” peaked at #4 on the U.K. charts, aided, no doubt, by the simple, chiming, recurring guitar hook. Corey Beasley of Pop Matters, “’Regret’ is as wistful as the band’s most melancholic material, but instead of cloaking that sadness in frigid synths and clattering drum machines, this track gives it wings: ‘Regret’ soars with the best of early ‘90s Britpop. Sumner’s plaintive vocal performance is among his strongest and most subtle. The song bounces along on Peter Hook’s typically emotive bassline, and Sumner’s staccato guitar hook seems to gain import with each repetition. ‘Regret’ served as something of New Order’s swansong, as the band broke up later that year. It would reunite in 1998, but it’d never quite recapture the easy beauty shown here.”

398. “7 Seconds,” Youssou N’Dour & Neneh Cherry. Songwriters: Neneh Cherry, Youssou N’Dour, Cameron McVey, Jonathan Sharp; #98 pop; 1994. Youssou N’Dour has been described by Rolling Stone magazine as “perhaps the most famous singer alive” in Senegal and much of Africa. Neneh Cherry found pop success in the U.S. in 1989 with the dance number “Buffalo Stance.” As a duo, N’Dour and Cherry had a major international hit with “7 Seconds,” a song with lyrics in English, French, and the West African language Wolof. According to Cherry, the title concept refers to a newborn’s first seconds on the planet, “not knowing about the problems or violence in our world.” There’s an eerie edge to the music, magnified by the intensity of the vocals. Cherry, “Music is one place where there shouldn’t be any boundaries. We don’t have to be stuck behind borders; music is a dialogue. For me and Youssou, it was important to make that reach and make an exchange culturally and sonically.”

397. “Heartspark Dollarsign,” Everclear. Songwriters: Greg Eklund, Craig Montoya, Art Alexakis; #85 pop; 1995. Art Alexakis, “I’ve always wanted to talk about racial things. I grew up in a black neighborhood, so the things that concerned a lot of people didn’t concern me. I’d always been a pretty sexually charged kid, and I had girlfriends at a very early age. If you look at all the women I’ve ever dated, there’s no type. I think beauty and intelligence and humor, those are devoid of type. I dated a black girl, and it was this three-week whirlwind — like, from the time we looked at each other across the room, it was on, you know? It was just on. And she came out to meet my mom, and my mom was horrible to her. And the next day we went and met her parents. Her mom was half-black, half-white and her dad was black, and he was nicer to me than her mom. Her mom was just flat out like, ‘You shouldn’t be here.’ She just didn’t want any part of that world, and it affected our relationship. We were young enough that we weren’t in a place where we could go tell the world to go fuck itself. We said we were, but we really weren’t. Not at that point. And that’s what that song’s about, is just embracing the value of love and passion — your heart.”

396. “Treaty (Filthy Lucre Edit),” Yothu Yindi and Gavin Campbell. Songwriters: Paul Kelly, Mandawuy Yunupingu, Stuart Kellaway, Cal Williams, Gurrumul Yunupingu, Milkayngu Mununggurr, Banula Marika, Peter Garrett; Did Not Chart; 1991. During the mid-1980s, a white Australian rock band merged with an Aboriginal folk group to form Yothu Yindi, a band that used instrumentation from both cultures. They had one of the more unlikely dance hits of the 1990s with “Treaty,” a song inspired by political tension between the Aboriginal people and the Federal government. Mandawuy Yunupingu, “(Australian Prime Minister) Bob Hawke visited the Territory. He went to this gathering in Barunga. And this is where he made a statement that there shall be a treaty between black and white Australia. Sitting around the camp fire, trying to work out a chord to the guitar, and around that camp fire, I said, ‘Well, I heard it on the radio. And I saw it on the television.’ That should be a catchphrase. And that’s where ‘Treaty’ was born.” Melbourne based DJs Gavin Campbell and Robert Goodge did a dance remix of the original track that became a pop hit in Australia and a club hit in the U.S. Peter Garrett of Midnight Oil, “The song is still as resonant, as meaningful and as important and as urgent to act on as it was the day that it was performed and broadcast around the country. I can still hear the voices calling out. Hearing them hits me as loud and as clear and as strong as it did when I first heard it.” By the way, the treaty has never been executed.

395. “Beautiful Stranger,” Madonna. Songwriters: Madonna, William Orbit; #19 pop; 1999. Dialogue from the film “Austin Powers: The Spy Who Shagged Me”: “The 70s and the 80s? You’re not missing anything! I looked into it. There’s a gas shortage and A Flock of Seagulls. That’s…about…it.” For her soundtrack single, Madonna skipped those decades, merging the 90s and the 60s with this dance number with throwback period piece psychedelic elements. The flute solo? It’s groovy, baby!

394. “Buddy Holly,” Weezer. Songwriter: River Cuomo; Did Not Chart; 1994. Weezer wasn’t afraid to ask the tough questions in 1994, pondering, “What’s with these homies dissin’ my girl?/Why do they want to front?” Bassist Matt Sharp, “(Producer) Ric (Ocasek) said we’d be stupid to leave it off the album. We’d come into the studio in the morning and find little pieces of paper with doodles on them: WE WANT BUDDY HOLLY. We got into the early Cars thing and began to notice a musical similarity between us and them. Our use of chords, downstrokes and melodies shows the same economy and tightness as a Cars song. ‘Buddy Holly’ is not that far off from ‘Just What I Needed.’” Rock critic Stewart Mason, “Short, brash, incredibly catchy, and utterly charming. Frontman Rivers Cuomo’s lyrics, as always, don’t actually make a lot of sense and the singalong chorus has absolutely nothing to do with the nonsensical verses; really, the song is as much about hooks like the ‘hoo-hoo’ backing vocals and bassist Matt Sharp’s falsetto lead-in to each chorus as anything else.”

393. “Come Around,” Kim Richey. Songwriters: Tim Krekel, Kim Richey; Did Not Chart; 1999. Kim Richey had success as a songwriter, to include “Nobody Wins,” a #2 country hit for Radney Foster in 1993 and “Believe Me Baby (I Lied)” a #1 country hit for Trisha Yearwood in 1996, while becoming a recording artist in her own right. Her first two albums reflected mainstream Nashville production values for that era, but failed to generate commercial interest. She moved to a folk pop style with 1999’s “Glimmer” album. “Come Around” is regretful look at a bad romance that Richey wishes she could forget, with a sound reminiscent of Shawn Colvin. The narrator proclaims, “Doesn’t seem like much to ask/To live a life that isn’t caught up in the past.” Yet, Richey is still caught up in the past, having released a completely re-recorded version of the “Glimmer” album in 2019.

392. “Thinking Out Loud,” Ron Sexsmith. Songwriter: Ron Sexsmith; Did Not Chart; 1997. “Thinking Out Loud,” the lead track to Ron Sexsmith’s 1997 album “Other Songs,” is classic confessional singer/songwriting material, where the narrator is involved in a relationship that involves too much deliberating and not enough passion. From the U.K. website “About Last Night,” “’Thinking Out Loud’ touches on that common theme of finding that your relationship is going wrong and not quite having the magic solution to change things. But you could hardly imagine Tina Turner covering the song, for instance, or Elvis Presley belting it out as he did with the similarly themed ‘Suspicious Minds.’ Only Ron could pull this off, and he did so brilliantly.”

391. “Hippychick,” Soho. Songwriter: Timothy London (Timothy Brinkhurst); #14 pop; 1990. The English trio Soho were comprised of sisters Jacqueline and Pauline Cuff with producer Timothy London. They had their only major hit with “Hippychick,” which begins with a sample of The Smiths “How Soon Is Now?,” – the tremolo guitar riff that Johnny Marr nicked from The Rolling Stones cover of Bo Diddley’s “Hey Mona” – and is mixed with a beat taken from the R&B act Soul II Soul. A trippy, dance number built for the rave scene, the song broke pop in the U.S. first (in Houston, of all places) before it scaled the U.K. charts. Songwriter Tim London, explaining something I would have otherwise never imagined, “’Hippychick’ was written as a short blues based pop song, written from the perspective of a young woman arrested by her boyfriend (who is a policeman) on a demonstration. She is basically telling him it’s over, because, as a cop, he supports an establishment she wants to get rid of.”