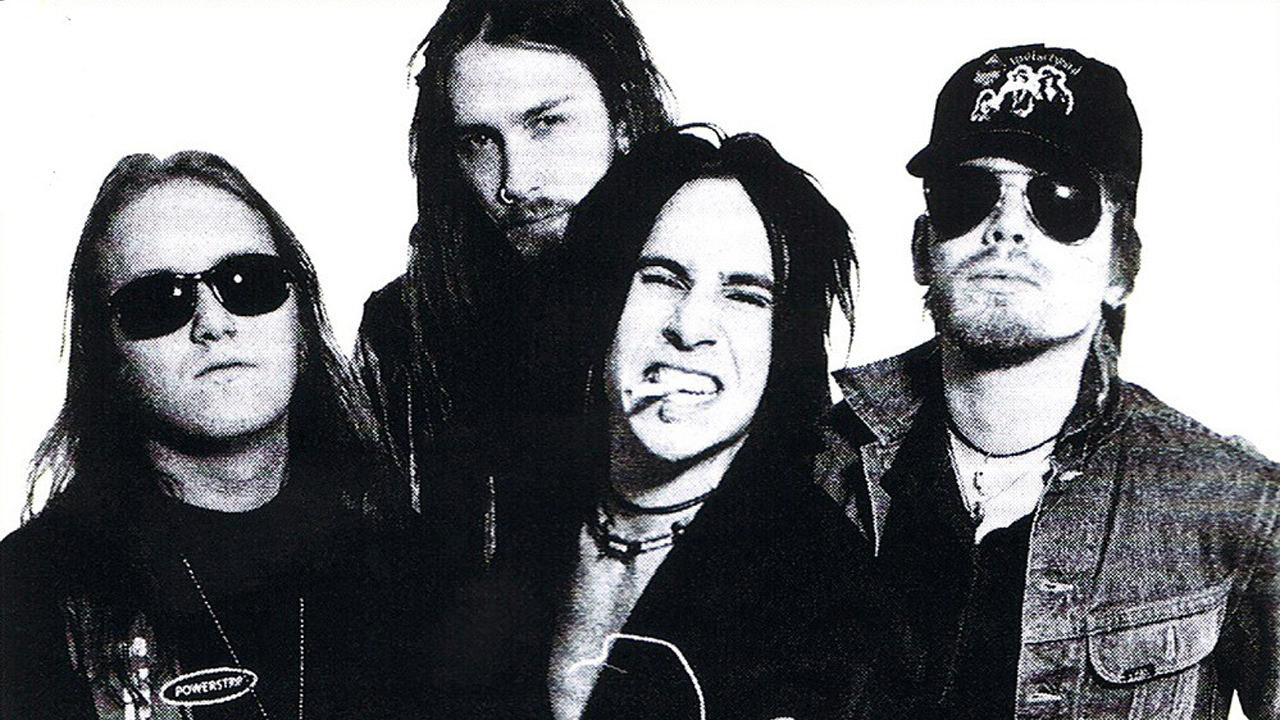 40. “Only Happy When It Rains,” Garbage. Songwriters: Garbage; #55 pop; 1995. Garbage, cognizant of the dark themes in their music and the alternative scene in general during the 1990s, decided to lampoon the status quo on “Only Happy When It Rains.” Butch Vig, “(It’s) about what happened with grunge and the angst-filled thing which has dominated the American alternative rock scene… With us there’s self-deprecation, we have to poke fun at ourselves because we’re so incredibly obsessive about the songs and the lyrics, which makes us filled with self-loathing, hur hur.” Roc critic James Hunter, “On ‘Only Happy When It Rains, Garbage rock righteously as though (lead singer Shirley) Manson is running for the presidency of the Robert Smith Fan Club. Just as you think she has won by a landslide, the band swings in with rhythms and riffs whose complex demeanor recolor the whole song.” Doug Stone of All Music, “This anti-rallying cry comes dangerously close to defining the times and the commercialism of angst.

39. “The Band Plays On,” John Anderson. Songwrites: Fred Knoblock, Gary Scruggs; Did Not Chart; 1996. John Anderson’s second major commercial run ended with his 1996 album “Paradise.” The title track went to #22 on the country charts and two other singles from the release failed to make Top 40. “The Band Plays On,” an album track about resilience that nobody heard, was written by Fred Knoblock, who scored a #1 adult contemporary hit with “Why Not Me” in 1980, and Gary Scruggs, a son of bluegrass legend Earl Scruggs. John ironically duets with famed drummer Levon Helm from The Band on this gospel influenced number that will absolutely rip your heart of its chest cavity, slam it on the driveway, then stomp a mudhole in it. It doesn’t matter what happens to you in life. Nobody cares. The band plays on.

38. “Indianapolis,” Bottle Rockets. Songwriter: Brian Henneman; Did Not Chart; 1997. “Indianapolis,” a true life story of a van breakdown and the ensuing working class angst about dependable transportation, was originally recorded by Brian Henneman as a solo record in 1992 with backing from Jay Farrar (Uncle Tupelo/Son Volt), Jeff Tweedy (Uncle Tupelo/Wilco), and future Bottle Rockets drummer Mark Ortmann. In fact, “Indianapolis” played a key role in getting Henneman his record contract that resulted in the formation of the Bottle Rockets. On the 1997 release, the band bashes away at their frustration while Henneman sings the best lyric of the decade, “Who knows what this repair will cost?/Scared to spend a dime/I’ll puke if that jukebox plays John Cougar one more time.” Whenever I hear this song performed live, I feel like I’m in the exact spot that the universe wants me to occupy.

37. “Go West,” Pet Shop Boys. Songwriters: Jacques Morali, Henri Belolo, Victor Willis, Neil Tennant, Chris Lowe; Did Not Chart; 1993. “Go West” was originally a minor pop hit for The Village People in 1979, peaking at #45 in the U.S. pop charts, but, perhaps more importantly, it was a #15 U.K. pop hit. The Pet Shop Boys significantly restructured the song, resulting in a European soccer anthem and their biggest international hit of the 1990s. In addition to adding a new bridge and using a Broadway choir, the arrangement brought to the forefront the chord progression to German composer’s Johann Pachelbel’ “Canon in D.” Journalist Robbie Daw, “Lyrically, ‘Go West’ describes a gay utopia, though lifting it out of the ’70s and re-setting it as an AIDS-era anthem enabled the Pet Shop Boys to add new shades of both irony and sorrow to the song.” Neil Tennant in 2017, “I never know whether ‘Go West’ didn’t establish such a strong idea of us in the public eye that it became an albatross. It’s such a strong thing, it’s difficult to escape from – assuming you want to escape from it. People expect you to doof-doof, four-on-the-floor and we don’t necessarily do that.”

36. “Waltz #2 (XO),” Elliott Smith. Songwriter: Elliott Smith; Did Not Chart; 1998. Singer/songwriter Elliott Smith was a master of melancholy. Journalist Marcy Donelson describing his work, “Distinguished by a vulnerable demeanor conveyed by intense but wispy vocals (often double-tracked) and personal lyrics that referred candidly to subjects like addiction, depression, and alienation.” “Waltz #2 (XO)” is a sonically beautiful song that documents Smith’s childhood issues with his mother and a reportedly abusive stepfather. Journalist Michael Nelson, “The bridge is one of the most aching and moving moments of music in a catalog that is entirely aching and moving, as Elliott sings of the prison-home provided by his mother, ‘I’m here today, expected to stay on, and on, and on,’ his voice going higher and higher. When Elliott sings, ‘I’m never gonna know you now, but I’m gonna love you anyhow,’ he’s singing to his mother, the woman whose choices forced him to leave.” Elliott Smith died tragically in 2003 and there’s still no definitive answer of whether the cause was suicide or homicide.

35. “Rebel Girl,” Bikini Girl. Songwriters: Kathleen Hanna, Billy Karren, Tobi Vail, Kathi Wilcox; Did Not Chart. Kathleen Hanna screams about her same sex crush while her backing band rocks out like the Sex Pistols in 1977 on this riot grrrl anthem. Kathleen Hanna, “Me and Allison Wolfe (of the band Bratmobile) had started doing this group that later became riot grrrl, and it was a bunch of girls talking about starting bands and zines and how we could be feminist in the scene, including doing benefits for other groups that weren’t directly, you know, feminist with a capital ‘F.’ I was also being mentored at the time by the spoken-word artist Juliana Luecking, who has always given me great advice and shown me the ropes as a feminist artist. All of those girls were totally inspiring me, and the riot grrrl thing was inspiring me, and it was really like I just stuck my hand up in the air and there it was. I don’t really feel like I can take credit for writing it — I feel like it just kind of wrote itself.” Rolling Stone, “’Rebel Girl’ is an anthem for the neighborhood girl with the revolution in her hips. (It) keeps every radical promise punk rock ever made.”

34. “Shove,” L7. Songwriters: Suzanne Gardner, Donita Sparks; Did Not Chart; 1990. “Shove” is a classic rock ‘n’ roll song – from the opening adrenaline guitar riff to Donita Sparks raw, hostile vocals about a list of grievances. Her targets include a host of authority figures, a crumbling environment, and sexual harassment. Sparks, “’Shove’ was an underground hit, and what shook the ground for us. Like an earthquake, it busted up the ground for us as far as clearing a path to get noticed, because before that we were not noticed.” Jonathan Poneman of Sub Pop Records, “’Shove’ singularly blew my top off. I compare L7 with Motorhead or the Ramones, a real primal rock machine.”

33. “City Slang,” Hellacopters. Songwriter: Fred Smith; Did Not Chart; 1997. Sonic’s Rendezvous Band formed in Michigan in 1975 and included in its ranks Fred “Sonic” Smith of the MC5 and Scott Asheton of The Stooges. In 1978, the band released the bare knuckled Motor City guitar jam “City Slang,” which is the best rock anthem in history that nobody knows. Oliver Hall of the Dangerous Minds website, “’City Slang’ is every bit as good as ‘Search and Destroy,’ ‘Kick out the Jams’ and ‘Sonic Reducer.’ A summer day that doesn’t end with the cops confiscating your wading pool and scratching the needle across your priceless copy of ‘City Slang’ is a summer day wasted.” No band could have recreated the chaotic glory of “City Slang” like the Hellacopters, a band built for that job. New Mexico/Texas punk rock legend Tom Trusnovic, “Seriously, that guitar liftoff at the end is exhilarating.”

32. “The Book of Love,” The Magnetic Fields. Songwriter: Stephin Merritt; Did Not Chart; 1999. The Magnetic Fields is a vehicle for singer/songwriter Stephin Merritt and his band floored critics with his 1999 triple CD concept work “69 Love Songs.” Not sounding anything like The Monotones of 1950’s fame, Merritt constructs a sound of lo fi beauty on “The Book of Love,” where the narrator is simultaneously bored with the concept of attachment, yet desperately needs it. Novelist Peter Straub, “It’s a romantic song expressed in decidedly anti-romantic terms. The lyrics are deliberately – or instinctively – not poetic at all, they’re ordinary ‘cat and dog’ language. And that gives Merritt’s lyrics tremendous power because it is the language we use with one another. Anytime he uses the words ‘anything’ or ‘nothing’ it carries huge emotional weight. And when he says ‘The book of love is long and boring,’ what he’s really saying is: ‘I want to read that book from beginning to end.’” Merritt on the rewards of his most famous song, “Peter Gabriel’s cover of this song paid for the down payment on my house in L.A.”

31. “Seminole Wind,” John Anderson. Songwriter: John Anderson; #2 country; 1992. After being left for dead by country music radio in 1987, John Anderson had a massive commercial comeback in 1992. Anderson penned “Seminole Wind,” the title track to his double platinum album released that year. The lyrics are filled with rich imagery about his native Florida and theoretical economic progress that destroyed the state’s natural habitat. However, it is such a beautiful composition that it never sounds preachy. Anderson, “I worked on it a long time. It was something I kept going back to and trying to make better. At that point, it wasn’t like we were writing a song for any particular reason other than to write a good song. Our record label deals were at a standstill. When I first started writing ‘Seminole Wind,’ it didn’t strike me as being very commercial because of the environmental (theme). By the time I finished it and played it to people, they were saying, ‘That’s a good song.’” Mike Boehm of the Los Angeles Times in 1996, “’Seminole Wind’ is an anthem of environmental warning whose epic sweep and dark grandeur qualify it for serious consideration as mainstream country’s artistic high-water mark for the decade so far.”