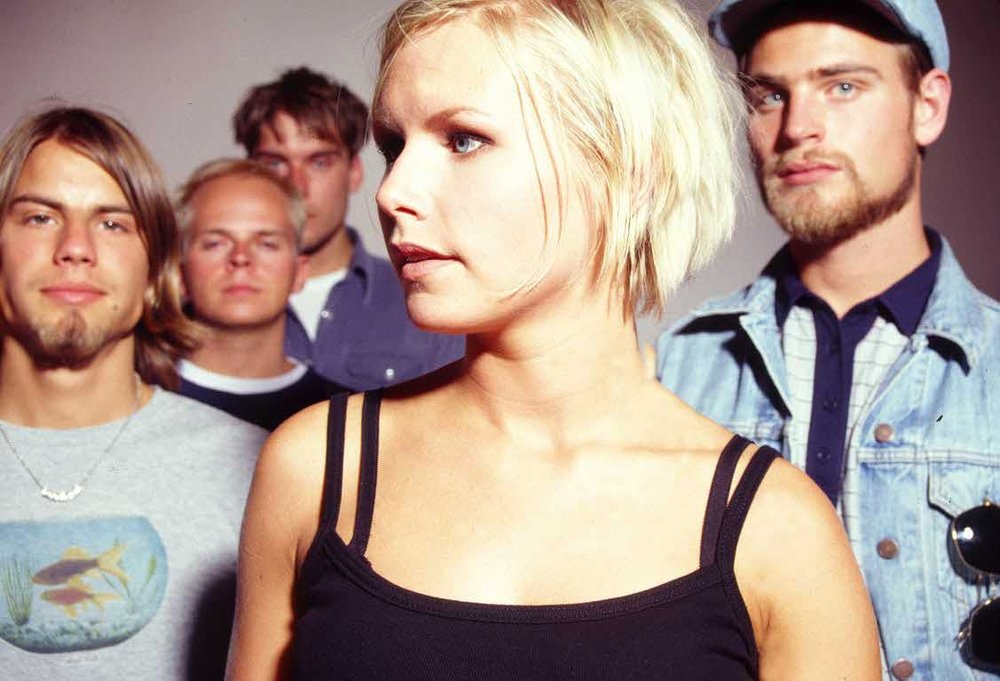 390. “Sex and Candy,” Marcy Playground. Songwriter: John Wozniak; #8 pop; 1997. The Minneapolis rock trio Marcy Playground had one of the more whimsical pop hits of the 1990s with the double cherry pie, disco lemonade “Sex and Candy.” Jonah Bayer of the A.V. Club, “’Sex And Candy’ takes the low-key grunge that Nirvana and Pearl Jam displayed in their MTV Unplugged performances and tones it down enough for stoners and jam band enthusiasts to enjoy, then builds it around an innately infectious chorus.” Songwriter Wozniak on his trippy, yet sensual hit, “I’m telling you, when I was very young I experimented with drugs, but when I was writing these songs, I wasn’t high. But it sounds like I was high.”

389. “Love Letter,” Bonnie Raitt. Songwriter: Bonnie Hayes; Did Not Chart; 1990. Singer Bonnie Hayes should have been a star in her own right, her 1982 single “Girls Like Me” was the height of effervescence in new wave pop. Instead, she ended up penning two of the major tracks for Bonnie Raitt’s 1989 commercial breakthrough album “Nick of Time,” which were “Have a Heart” and “Love Letter.” “Love Letter” was a 1990 single for Raitt that allowed her to get into a lustful slow blues groove. Raitt, “’Have a Heart’ is a goodbye song, and ‘Love Letter’ is a hello song. I just think it’s funny that they ended up on the same record, because it’s like the beginning and the end. ‘Love Letter’ is saying, ‘I’m in charge.’ It’s about that moment where you don’t really know whether it’s actually happening or it’s all in your mind.” Producer Don Was, “The attitude of the two Bonnie Hayes songs really encapsulates a nice part of the spirit behind Bonnie Raitt. She didn’t care whether she wrote a song or not, but it had to reflect who she honestly was and what she was going through.”

388. “Give Me One Reason,” Tracy Chapman. Songwriter: Tracy Chapman; #3 pop; 1985. Tracy Chapman had her breakthrough commercial success with the multi-generational poverty heartbreaker “Fast Car” in 1988 and it appeared she would be a one hit wonder until the simple blues rock of “Give Me One Reason” gave her an even bigger hit in 1995. Dave Keeps of the “New York Times,” “’Give Me One Reason’ is a sultry blues shuffle that Chapman wrote 10 years ago but that sounds nothing like the protest folk that made her famous in the late 80s. The song is sassy, even sexy, unencumbered by politics; in short, Tracy lite.” Author Beretta E. Smith-Shomade, “Her raspy, authoritative voice and simple musical accompaniment defy the hyperactive music, movement, and editing of the 1990s videoscape.”

387. “Blazing Away,” Marianne Faithfull. Songwriters: Marianne Faithfull, Barry Reynolds; Did Not Chart; 1990. Marianne Faithfull was discovered by Rolling Stones manager Andrew Loog in 1964 and was a pop star in the U.K. during the mid-1960s. She later had a high profile relationship with Mick Jagger in the late 1960s, had a severe heroin addiction that left her homeless during the early 1970s. At the end of that decade, she had a major critical comeback with 1979’s punk rock/new wave inspired album “Broken English.” By the time she released the 1990 live album “Blazing Away,” her vocals were more in a torch/blues mode than pop. Rock critic Rob O’Conner, “The studio cut, ‘Blazing Away, with its ‘strange looking exile with a passion for the dangers’ perfectly captures the aura that haunts everything Marianne does.” The song sounds like it comes from the perspective of someone woozily imbalanced by chemicals who has no path back to stability.

386. “Every Little Thing,” Carlene Carter. Songwriters: Carlene Carter, Al Anderson; #3 country; 1993. What’s that famous Carlene Carter quote? She was going to put the bunt back in baseball? No, wait, the punt back in football? The affront back in country? Well, never mind. The daughter of June Carter Cash and Carl Smith, the stepdaughter of Johnny Cash, and the one-time wife of Nick Lowe, Carlene started releasing solo material in 1978, but didn’t have her first hits until Tom Petty’s bassist Howie Epstein produced her 1990 “I Fell in Love” album. The neo-rockabilly title track and the long suffering “Come on Back” both peaked at #3 on the country charts. Carter had her third and last Top Ten hit with “Every Little Thing,” an upbeat if-you’ve-got-an-itch-scratch-it look at romantic obsession. This was the first major country hit for songwriter Al Anderson, who ended up making a lot more money in Nashville than he did during the two decades when he was the lead guitarist for NRBQ.

385. “Lovefool,” The Cardigans. Songwriters Peter Svennsson, Nina Persson; Did Not Chart; 1996. After blessing the world with ABBA in the 1970s and Roxette in the 1980s, Sweden continued to export international pop acts in the 1990s via Ace of Base and The Cardigans. Based out of Jönköping, Sweden, The Cardigans had several minor U.K. hits before having their first major international smash with the hook filled, electronic heartache number “Lovefool.” Songwriter Peter Svennsson, “It was supposed to be some kind of a bossa nova: a totally different song, slow and mellow and sad. The production on it, though, and the disco drums made it all shinier.” Author Thanos Lolis with the pun of the decade, called “Lovesick,” “three minutes of sparkly, ABBAesque disco, very danceable and very capable of making a global hit. Singer Nina is doing a great job filling the air with breathy vocals, while the Moog synths and the guitars come in unison at approximately half-way through the first verse. This is catchy kitsch-in-sync.”

384. “Girls & Boys,” Blur. Songwriters: Damon Albarn, Graham Coxon, Alex James, Dave Rowntree; #59 pop; 1994. Blur is generally defined as a Ray Davies inspired Britpop band, but they went full Euro-disco with the club sex song “Girls & Boys.” This was a #5 U.K. pop hit and it’s not hard to imagine an entire audience screaming along with the “girls who are boys/who like boys to be girls/who do boys like they’re girls/who do girls like they’re boys” chorus. Damon Albarn was inspired to write the song after visiting a singles nightclub in Spain. Albarn, “All these blokes and all these girls meeting at the watering hole and then just copulating. There’s no morality involved. I’m not saying it should or shouldn’t happen.” Journalist Paul Moody, “It is simply bonkers. A biscuit-tin drum machine rattles out an into, a Chad Valley synthesizer bleeps along frantically behind it, and suddenly Damon’s barking along on top in sexy robot-cockney about the carnal pleasures to be had on the soaraway fun holidays of Club 18-Dirty. It’s Bill Wyman’s ‘(Si Si) Je Suis Un Rock Star’ in bed with Devo, with the windows wide open and the sheets reeking of suntan oil. Pop Muzik. Everybody’s doing it.”

383. “Lovin’ All Night,” Rodney Crowell. Songwriter: Rodney Crowell; Did Not Chart; 1992. Rodney Crowell and Rosanne Cash divorced in 1992, an event that may have inspired the 1992 Rodney Crowell album title “Life Is Messy.” It was his last album for Columbia Records and the last time he would have mainstream success as a recording artist (Crowell later had writing credits on major hits for Alan Jackson, Tim McGraw, Lee Ann Womack, and Keith Urban). “Lovin’ All Night” is a ‘50s inspired, country boogie number about the type of escapades that give a man no reason to leave his bedroom. Or in the words of author Alanna Nash, the song is a celebration of Crowell’s “new sexual freedom.” Patty Loveless had a hit cover in 2003, even though her reading is clumsier than a three-toed sloth tap dancing in a Vaseline factory.

382. “Stupid Girl,” Garbage. Songwriters: Duke Erickson, Shirley Manson, Steve Marker, Butch Vig, The Clash (credited for the sample from “Train in Vain”); #24 pop; 1996. Hotshot producer Butch Vig (Smashing Pumpkins, Nirvana) formed Garbage in 1993, hiring red hot Scot Shirley Manson to be the charismatic, image defining lead singer. Garbage had their only Top 40 single with the Grammy nominated “Stupid Girl,” a song described by Shirley Manson as, “about squandering potential, (it’s) our version of Madonna’s ‘Express Yourself,’ but a little more subversive.” Their blend of dance and alt-rock music was a fresh new sound, with “Stupid Girl” being described by the metal mag “Kerrang!” as “a classy piece of predatory pop perfection that wields an iron punch beneath its velvet glove.”

381. “It Only Hurts When I Cry,” Dwight Yoakam. Songwriters: Roger Miller, Dwight Yoakam; #7 country; 1991. Roger Miller didn’t particularly enjoy working with other songwriters, once brushing off an offer by saying, “Look, Hoss, Picasso didn’t co-paint.” Still, he co-wrote “It Only Hurts When I Cry” with Dwight Yoakam, an experience that Yoakam likened to “trying to ride a bicycle alongside a taxiing Lear jet.” This was Miller’s last hit songwriting credit before his death in October of 1992. Yoakam wasn’t convincing in the wounded lover role, but he was the undisputed king of the retro chic Bakersfield bop during that era.