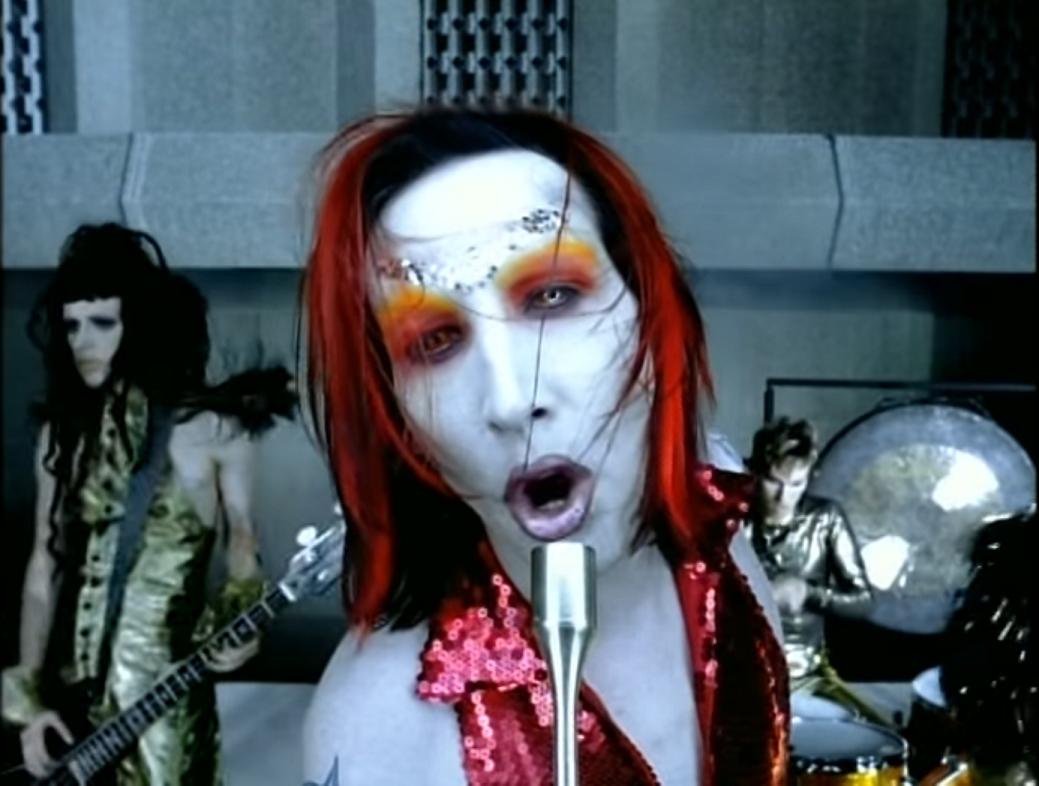 380. “The Dope Show,” Marilyn Manson. Songwriters: Marilyn Manson, Twiggy Ramirez; Did Not Chart; 1998. Marilyn Manson updated the type of theatrics that Alice Cooper received fame for the in 1970s and matched his outrageous image with modern electronic goth sounds. Manson had his biggest alt-rock/modern rock hit with “The Dope Show,” a sleaze filled number about the how quickly fame can end. Barry Walters of The Village Voice, “Over a skipping Gary Glitter beat, the pied piper of gloom celebrates the Clinton-era narcotics of oral stimulation and headrushing authority. Its sing-along chorus lends the social study a levity the Reznor period denied, and the bite-sized lyrics – bon mots like ‘Cops and queers make good-looking models’ – help the medicine go down. Despite the guitars pumping the hook in the proven grunge tradition, this bouncy sugar pill is radical for Manson not only because it’s pop, but also because it’s something few ’90s rockers have attempted: it’s sexy.”

379. “Brothers Gonna Work It Out,” Public Enemy. Songwriters: Keith Shocklee, Eric Sadler, Carl Ridenhour; Did Not Chart; 1990. Harder than most metal, Public Enemy sounded like they were tossing audio hand grenades even on a song of relative positivism such as “Brothers Gonna Work It Out.” Brian Joseph of The Boombox website, “The politics and the context are background factors; for five minutes, we groove because we are thrilled. ‘Brothers Gonna Work It Out’ sounds like a bacchanal taking place in a wind tunnel, with voices echoing throughout after being summoned from this anachronistic black cultural soup. And look at that Prince sample that twirls amidst the chaos. It’s the out-of-body guitar solo that ends and climaxes ‘Let’s Go Crazy.’ This ecstasy isn’t lost on Chuck D and Flava Flav’s call to action. ‘Brothers Gonna Work It Out’ revels in drawing from a darkened past to will a tomorrow into existence in the face of an antagonistic social construct. It’s what makes Chuck D and Flava Flav’s back and forth mid-song much more crucial: ‘Schools and the prisons/History shouldn’t be a mystery/Our stories real history/Not his story.’” The song title was first used by songwriter Willie Hutch as part of the score for the 1973 Blaxploitation film “The Mack.” You can listen to about ten seconds of Hutch’s recording and properly guess the year it was released.

378. “The Rockafeller Skank,” Fatboy Slim. Songwriters: Norman Cook, John Barry, Winifred Terry; #76 pop; 1998. British musician Norman Cook went from playing bass in the 1980’s U.K. pop band The Housemartins, then penned the 1990 #1 U.K. hit “Dub Be Good to Me,” before becoming a famous DJ using the name Fatboy Slim. “The Rockafeller Skank” was a mixture of the rhythm from the 1965 record “Sliced Tomatoes” by the Just Brothers from Detroit, a surf guitar sample, and a vocal hook (“right about now, funk soul brother”) from Bronx rapper Lord Finesse. Cook, on the reaction from his club scene, “It kind of had that thing that we were right in the middle of something special. I don’t think I’ve ever been so kinda musically high in my life. I don’t think anybody in the world was having more fun than we were.” Billboard magazine, “The beat isn’t just big. It’s absolutely massive.”

377. “Radiation Vibe,” Fountains of Wayne. Songwriters: Chris Collingwood, Adam Schlesinger; Did Not Chart; 1996. Rob Tannenbaum of the New York Times, “Sung to a girl who’s with the wrong guy, by a guy who thinks he’s the right guy. The first song on the first Fountains of Wayne album is lightly adorned power pop that became richer on subsequent albums, while keeping the downtrodden, slightly resentful tone. As in a Randy Newman song, the narrator has a bit too much confidence.” Adam Schlesinger, “That was a Chris song. But that song really started the band. Chris and I had worked together for many years before that song existed, and we had kind of taken this break. All the stuff that we had written before that just had a lot less personality or something. I don’t think we had quite broken out of imitating our heroes up ’til then. He just wrote it as a goof, but I was like, ‘Man, that’s a great song.’ I don’t know what it is about that song, but it’s got some kind of magic, fun quality to it that we never really had in anything before. I got very jealous of that song, and then we recorded a version of it and it came out so great. It really was the inspiration to write that whole first record.”

376. “Barrier Reef,” Old 97’s. Songwriters: Rhett Miller, Ken Bethea, Murray Hammond, Philip Peeples; Did Not Chart; 1997. How does a bad one night stand begin? Per the Old 97’s “Barrier Reef,” “So I sidled up beside her, settled down and shouted, ‘Hi there’/My name’s Stewart Ransom Miller, I’m a serial lady-killer’/She said, ‘I’m already dead,’ that’s exactly what she said.” Blogger Jim Connelly, “One of the most quotable songs in the whole Old 97’s canon, ‘Barrier Reef’ is a winning mix of a huge-ass Ken Berthea guitar riff, a jaunty beat from drummer Phillip Peeples and a vocal from Rhett Miller that perfectly caught the ambivalence he was singing about. What I love about ‘Barrier Reef’ is that juxtaposition between the bright, bouncy music, and the deeply conflicted and melancholic lyrics. Especially because you make the assumption for all of his ambivalence about the poorly-executed one-night-stand that he just had, it ain’t gonna stop him the next time he sees the opportunity.”

375. “Let the Rhythm Hit ‘Em,” Eric B. & Rakim. Songwriters: William Griffin, Jr., Eric Barrier; #23 R&B; 1990. Rakim sounds like a verbal assassinator on “Let the Rhythm Hit ‘Em,” while the drums pound with the relentless of a machine gun. Erik Adams of A.V. Club, “Rakim’s nimble, tongue-twisting rhymes are just as worthy of lyrical boasts as Eric B’s unpredictable turntablism. There’s experience backing every measure of ‘Let The Rhythm Hit ’Em,’ but the track still has a raw, frayed wire energy to it. It’s in the lyrical reference to an electrified subway rail, it’s in the grindhouse wah-wah lifted from unlikely hip-hop hero Bob ‘Angela (Theme from Taxi)’ James, and it’s in the way Eric B and Rakim work like prizefighters who spend eight hours a day at the speed bag. Every punch is perfectly timed and expertly aimed.” Rakim, who was selected as the best rapper of all time by Source magazine in 2012, on his primary inspiration, “When I sat down to write, it was John Coltrane that guided my flow. Hearing him bend bars and add techniques to his tracks that seemed impossible to play in a physical realm. That’s what I wanted my voice to sound like and that’s the inspiration I took into the booth.”

374. “She Don’t Use Jelly,” The Flaming Lips. Songwriters: Ronald Jones, Wayne Coyne, Michael Ivins, Steven Drozd; #55 pop; 1993. Before evolving into a critically acclaimed alt-rock unit, The Flaming Lips jumped onto MTV and alternative radio with the amusing stoner/stoned number “She Don’t Use Jelly,” which provides creative uses for Vaseline, magazines, and tangerines. Wayne Coyne, “When we recorded ‘She Don’t Use Jelly’ we knew we were making something special. Whatever the absurdness of it, you could understand that I’m talking about toast and Vaseline, and it had some kind of innocent little sexual thing that ran through the whole song. That was kind of cool for us because up until then all of our songs were so asexual. I think we felt that there was this sort of the Guns ‘N’ Roses mentality to rock ‘n’ roll, and we were something different. We really had a lot of area to explore that didn’t include a bunch of naked women – but here we felt like, ‘Oh, what the fuck, let’s go for it.’”

373. “Write This Down,” George Strait. Songwriters: Dana Hunt Black; Kent Robbins; #27 pop/#1 country. George Strait had his 17th and final #1 country single of the 1990s and what was at that time his biggest pop crossover hit with the pledge of faith number “Write This Down.” It was a posthumous hit for songwriter Kent Robbins who died in a car accident in 1997 (his credits include “Straight Tequila Night” by John Anderson, “Love is Alive” by the Judds, and “Every Light in the House” by Trace Adkins). “Write This Down” has the type of title phrasing and chorus that are made to reverberate off arena walls. Songwriter Dana Black, who also co-wrote the 1995 George Strait #1 country hit “Check Yes or No,” “I always say, ‘Thank you, Lord’ and ‘Thank you, George.’”

372. “You Get What You Give,” New Radicals. Songwriters: Gregg Alexander, Rick Nowels; #36 pop; 1998. The New Radicals were a standout one hit wonder act with “You Get What You Give,” a bright, airy, anthemic, heavily produced number that could be defined lyrically as being completely lightweight or anti-authoritarian, depending on the mindset of the listener. Stuart Berman of Stereogum, “t’s a driving, piano-powered anthem that pulled off the rare feat of sounding both unabashedly optimistic and bitterly cynical — a plaintive plea for sanity and humanity in a hyper-consumerist culture that treats celebrities like deities and encourages teens to rack up five-figure credit-card debts before they’re out of college.” The Edge of U2 has called “You Get What You Give” the song he is “most jealous of,” adding “I really would have love to have written that.” Nothing too trivial – besides singer Gregg Alexander, the only other permanent member of the band was Danielle Brisbois, who as a child actress worked in the Norman Lear sitcoms “All in the Family” and “Archie Bunker’s Place.” Brisbois later had writing credits on the Natasha Bedingfield hits “Unwritten” and “Pocketful of Sunshine.”

371. “Cry on the Shoulder of the Road,” Martina McBride. Songwriters: Tim Krekel; Matraca Berg; #25 country; 1997. Although his backing vocals are a bit muted, Levon Helm made his last appearance on mainstream radio on this Top 40 country hit. Martina McBride, working her country music as power ballad routine, leaves an unappreciative lover on “Cry on the Shoulder of the Road,” but doesn’t pretend there’s no pain in the bargain. Billboard, “She does not simply hint at vulnerability, she opens up and pours her heart out.” McBride never crossed over for a significant pop audience, but she connected with female country music fans – releasing eight consecutive platinum albums from 1993 to 2005. You know somebody’s on a winning streak when their obligatory Christmas album sells over a million copies.