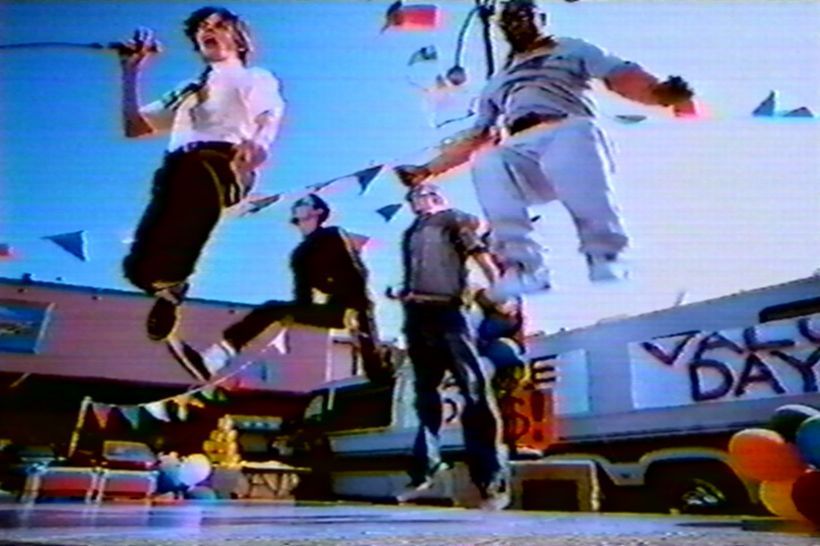 170. “I’m the One,” Descendents. Songwriter: Karl Alvarez: Did Not Chart; 1996. The Descendents are trying to fight their way through the friend zone on “I’m the One” – “You tell me that I’m not you’re type/But still you call me late at night/Every time he picks a fight/After all he’s said and all he’s done/I’m the one.” Rock critic Ned Raggett called the song “a perfect tug-the-hearstrings hooky roar,” while a review from Colin’s Punk Rock World summarizes the strength of the song with a simple summation – “we’ve all been there.”

169. “I Try to Think About Elvis,” Patty Loveless. Songwriter: Gary Burr; #3 country; 1994. It’s not easy to replicate the energy of 1950’s rock ‘n’ roll, but Patty Loveless and her producer/husband Emory Gordy, Jr. managed to do that with the manic pop thrill of “I Try to Think About Elvis.” Lyrically, Loveless lists things she tries to think about to avoid her romantic obsession, including Shakespeare, The Creature from the Black Lagoon, sushi bars, and saxophones. Musically, there’s a homage to Jerry Lee Lewis in the instrumental break. Songwriter Gary Burr, “I had to rewrite ‘Elvis’ because it was a very testosterone-driven song. It was also all about homeruns, hand guns, and red meat. So, I rewrote it and tried to get in touch with my feminine side. I wrote about hair-dos and tattoos – two important things to a woman to me.”

168. “It Came from the Ground,” Badly Drawn Boy. Songwriter: Damon Gough; Did Not Chart; 1999. Badly Drawn Boy is the stage name for English singer/songwriter/multi-instrumentalist Damon Gough who began his recording career with several EPs in the late 1990s. “It Came from the Ground” is the title track of a 1999 EP that features wickedly good percussion work by future Fall drummer Spencer Birtwistle. Trouser Press, “’It Came from the Ground’ shines in a Zombies manner, a bass and drums collage that makes simple beats saint-like and heroic.” The overall impact – imagine if Aztec Camera’s Roddy Frame decided to front a jam band.

167. “Backwater,” Meat Puppets. Songwriter: Curt Kirkwood; #47 pop; 1993. The acid drenched, neo-psychedelia Arizona band the Meat Puppets seemed like an unlikely act for mainstream success, but had success on MTV, modern rock radio, and mainstream rock radio with “Backwater, a song that was most likely about Curt Kirkwood’s heroin addiction. Chuck Eddy of Rolling Stone, “Thanks to the promotional efforts of Nirvana, who’d covered three 1984 Meat Puppets songs with brothers Curt and Chris Kirkwood in their ‘MTV Unplugged’ set the previous fall, ‘Too High to Die’ is the only gold album of these brain-dusted desert rats’ long career; Top 50 single ‘Backwater’ would be the biggest Neil Young hit since ‘Old Man’ if it was one, which it almost is.” From the Sputnik Music website on the trio’s evolution from its punk rock/SST days, “It’s hard to go from one of the Meat Puppets CD’s from the early 80’s and go to this, and realize they are still the same band.”

166. “Race for the Prize,” Flaming Lips. Songwriters: Wayne Coyne, Michael Irvins, Steven Dowd; Did Not Chart; 1999. Wayne Coyne sings about three scientists working to build the atomic bomb on “Race for the Prize,” which uses a prominent theremin for that otherworldly sound. Chris DeVille of Stereogum, “Race for the Prize” is both epic and completely ridiculous. With a jarring thwack, Steven Drozd’s drumbeat begins bashing away at the front of the mix, a disorienting production choice that contributes to the feeling of a demo transposed into holographic 3D. Instead of overdriven power chords, we’re treated to a swirl of synthesizers mimicking orchestral strings, sighing wordless harmonies, Michael Ivins’ steadfast bass, and an assortment of other pretty instrumental flourishes. Atop the ruckus is Coyne’s Neil Young mewl crying out about a pair of scientists racing to save mankind from some unspecified threat even if it costs them everything.” Ain’t nothing weirder than Oklahoma City art rock.

165. “Wichita Lineman,” Freedy Johnston. Songwriter: Jimmy Webb; Did Not Chart; 1993. “Wichita Lineman” is one of the most beautiful songs in pop music history and Freedy Johnston’s faithful cover wonderfully captures the aching longing that makes the song so powerful. Johnston grew up in rural Kinsley, Kansas, and perhaps had a personal view of the kind of wide open spaces and desire to be somewhere else that made it easy for him to capture the sweeping emotions of “Lineman.” Johnston would later revisit “Lineman” in an interesting way, using the song as a template for his 2015 album title track “Neon Repairman.” Johnston, “I wrote out ‘Wichita Lineman,’ all of the words, on a pad. And then I wrote out all that I had of ‘Neon Repairman’ that kind of matched them, like throughlines to the similar lines and then whatever the ‘Wichita Lineman’ was kind of doing, I just went over the neon repairman and made him do something similar.”

164. “Look at Us,” Vince Gill. Songwriters: Vince Gill, Max D. Barnes; #4 country; 1991. Vince Gill released four singles from his 1991 “Pocket Full of Gold” album and they all found the Top Ten of the country charts. “Look at Us” wasn’t the biggest hit, that honor would go to Gill’s version of the Ray Price shuffle on the #2 hit “Take Your Memory with You.” Still, “Look at Us” is one of his most emotionally charged performances, a statement of pride and commitment about the type of long term love that everyone yearns to have. John Hughley, the master of the “crying steel” sound, kept the proceedings from getting too self-congratulatory. In 2014, Gill wryly noted that “Look at Us,” a modern wedding song written about a marriage that ended in 1997, “helped me buy a house I can no longer afford to live in.”

163. “Where It’s At,” Beck. Songwriters: Beck, John King, Michael Simpson; #61 pop; 1996. Beck jumped into turntable culture on “Where It’s At,” sharing production duties with The Dust Brothers and talking spoken word samples from a sex education album. Journalist Danny White, “From the hiss of needle on vinyl at the start and the ‘jigsaw jazz and the get-fresh flow,’ this might be the song that best sums up Beck’s magpie influences. Freewheeling, inventive and irreverent, it’s a bewildering but beguiling mix of bizarre samples, an Afrika Bambaataa-style groove, a funked-out lounge-lizard keyboard line and a detuned holler of ‘I got two turntables and a microphone’ – pilfered from Mantronix’s seminal electro 12 inch ‘Needle to the Groove.’” Producer Mike Simpson, “The horns and the keyboard riff just takes you back to shows like ‘The Wonder Years.’ It’s one of those riffs that makes you reminisce back to your childhood.” Beck, “I came up with that little riff on the Wurlitzer organ, and said I gotta remember this. The Dust Brothers were like-minded. We were drawn to the way drums had been recorded in the Sixties and early Seventies: sort of a heavy, dry, thick, soulful sound.”

162. “If It Makes You Happy,” Sheryl Crow. Songwriters: Sheryl Crow, Jeff Trott; #10 pop; 1996. Sheryl Crow mixed her big chorus pop instincts with a Rolling Stones inspired guitar riff on her theoretical bad girl number “If It Makes You Happy.” Co-writer Jeff Trott, “’If It Makes You Happy’ was written before I met Sheryl Crow. I was originally going to use it on what would have become my first solo album. But Sheryl liked it and used it. Of course, if I recorded it, it would have probably sounded different.” Gabriela Tully Claymore of Stereogum, “That particular feeling of catharsis, the one you get when the entire world seems to fall away and all that exists is you and a song you’re screaming, if only for a moment, occurs in a lot of places. It’s the ‘Wanna change my clothes, my hair, my FACE!’ in Springsteen’s ‘Dancing in The Dark’; the ‘hooooooooold me closer!’ in ‘Tiny Dancer.’ It’s pretty much the entirety of Oasis’ ‘Wonderwall.’ It’s the music that brings the kind of joy you can’t really explain, you can only experience. The chorus of ‘If It Makes You Happy’ was designed to make you want to participate; it’s a life-affirming piece of pop.”

161. “John Cage Bubblegum,” Stereolab. Songwriters: Tim Gane, Laetitia Sadier; Did Not Chart; 1993. If you feel like you can live without garage punk meets Europop, the sheer intensity of the wonderfully named “John Cage Bubblegum” should change your mind. Tim Gane, “We were trying to make what I called juxtaposition: a montage, or collage, to see how one thing influenced another.” Laetitia Sadler, “We were quite informed by Dada. They were about putting one thing against another and seeing what happens, and maybe you find a deeper truth in that collision.” Rock critic Raymond Cummings, “Guitars rule the roost on ‘John Cage Bubblegum,’ a grimy neon blur of tiny drums, feedback, mashed chords thrashing in place as the mix perpetually teeters on the verge of swallowing itself, organs priming the pump, and lead and backing vocals ping-ponging about within the tune’s hermetically sealed pleasure chamber. Ultimately a vodka-and-Red Bull-doused-lemonade Slurpee of a single. If Stereolab can truly be said to have a recorded essence, this is it.”