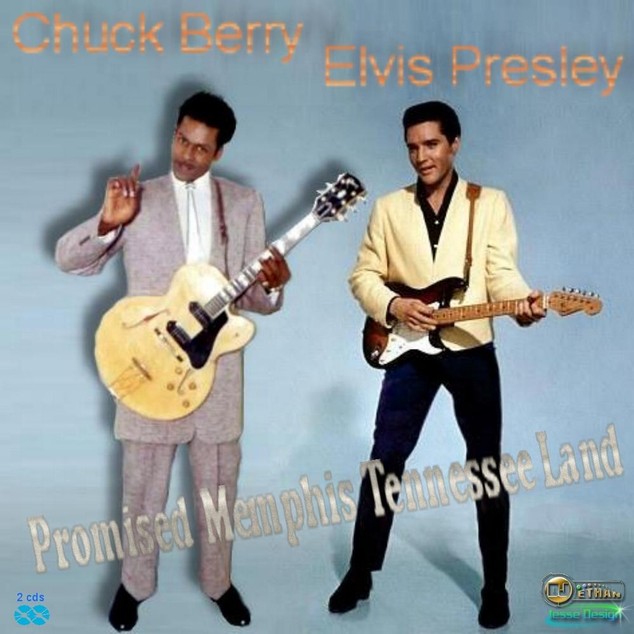 We remember or reflect on the 1950s as “The Big Bang” era of rock ‘n’ roll, when Elvis and Chuck transformed popular culture via their music and public images. Looking backwards, this major transformation in music seems inevitable, if you believe that nature abhors a vacuum. The popularity of Western swing music and jump blues died at the beginning of the 1950s. Bob Wills, who had largely defined what commercial country music was prior to the ascension of Hank Williams, had one hit during the 1950s – the weeping “Faded Love.” Louis Jordan, the jump blues opposite side of the coin of Wills (note how easily Jordan’s “Choo Choo Ch’ Boogie” was transformed into Western swing by Asleep at the Wheel) had his last charting R&B single in 1951. The public was ready for new sounds. The death of Hank Williams in early 1953 contributed to the aforementioned vacuum, but another factor in the development of rock ‘n’ roll was the booming post World War II economy. America achieved what had been to that historical point the highest level of national prosperity under the Eisenhower administration. For the first time in history, teenagers were viewed as viable consumers with either enough influence or coin to be courted in the marketplace. So, the new youth culture was a somewhat inevitable collision of art and commerce.

When did the rock ‘n’ roll era begin? Who knows, but a few legitimate seeds were planted in 1951. In April of that year, two major – quote/unquote – “rock ‘n’ roll” records were released. Ike Turner and His Rhythm Kings, under the name Jackie Brenston and His Delta Cats, released “Rocket 88,” a blues shuffle with a boogie piano and lyrics that saluted a hot, female attracting automobile. Ike Turner would later state, “I don’t think that ‘Rocket 88’ is rock ‘n’ roll. I think that ‘Rocket 88’ is R&B, but I think ‘Rocket 88’ is the cause of rock and roll existing … Sam Phillips got Dewey Phillips to play ‘Rocket 88’ on his program – and this is like the first black record to be played on a white radio station – and, man, all the white kids broke out to the record shops to buy it. So that’s when Sam Phillips got the idea, ‘Well, man, if I get me a white boy to sound like a black boy, then I got me a gold mine,’ which is the truth.” Even if “Rocket 88” didn’t contain the type of backbeat that would later be popularized by Chuck Berry and Little Richard, the subject matter, the honking sax solo, and the guitar distortion were undeniable harbingers of things to come.

Also, in April of 1951, the R&B group The Dominoes released “Sixty Minute Man,” a song that could be interpreted as nothing other than braggadocio about a man’s ability to execute an hour long sex session. “Sixty Minute Man” not only topped the R&B charts for over three months, but miraculously crossed over for a Top Twenty pop hit. For the first time, pop radio had moved from non-threatening black artists such as crooning Nat King Cole and joking Louis Jordan to accept raw sexuality. R&B artists were having commercial, if not mainstream, success with risqué material years before Elvis shocked mainstream America. Blues shouter Wynonie Harris went R&B Top Ten early in the decade with “I Like My Baby’s Pudding” and “Lovin’ Machine,” songs that help define his insatiable sex driven persona. A few years later, Muddy Waters invented the rock ‘n’ roll stop/start rhythm with “Hoochie Coochie Man,” a title that includes slang for…let’s say…a certain part of the female anatomy. One could argue that the concept of “rock ‘n’ roll” simply allowed young white men to sing about their physical needs in ways their more daring R&B counterparts had been doing for years.

By 1954, pop radio had become receptive to what we now know as “doo wop” music with R&B crossover hits from The Spaniels (“Goodnite, Sweetheart, Goodnite), The Crows (“Gee”), The Chords (“Sh-Boom”) and The Moonglows (“Sincerely”), with the latter hit no doubt being influenced by the machinations of group manager/payola kingpin Alan Freed. (In an early version of being Pat Boone’d, “Sh-Boom” was a bigger hit by the whitewashed Canadian act The Crewcuts than by Bronx R&B group The Chords). During that year, another R&B sex song crossed over to the pop charts in “Work with Me, Annie,” by Hank Ballard and the Midnighters. White rock ‘n’ roll hit the mainstream, not via Elvis, but by former yodeling cowboy singer Bill Haley, almost by accident. “Rock Around the Clock” was first recorded by a novelty act, Sonny Dae and His Knights, in 1954. Spit curl trendsetter Bill Haley & His Comets had found the pop charts with three singles in 1953, the biggest hit being the genre defying “Crazy Man Crazy.” Haley’s version of “Rock Around the Clock” was released in May of 1954 and died a quick commercial death. After being included in the 1955 “social commentary” film “Blackboard Jungle,” Haley’s Hank Williams influenced rocker (cf. “Move It on Over”) topped the Billboard charts for two months during the summer of that year, sandwiched between the #1 singles “Cherry Pink (And Apple Blossom White),” by big band leader Perez Prado and Mitch Miller’s militaristic take on “Yellow Rose of Texas.” The following year Elvis left Sun Records for RCA and the world as we know it was forever changed.

Still, before Bill Haley and Elvis, seminal R&B records were being produced by Atlantic Records, under the direction of Turkish immigrant Ahmet Ertegun and his Jewish Bronx based creative partner Jerry Wexler. Altantic was formed in 1947 and had their first national hit in 1949 with Stick McGhee’s “Drinking Wine, Spo-Dee-O-Dee.” During the early 1950s, Ruth Brown, the Clovers, Big Joe Turner, Ray Charles, and LaVern Baker released commercially successful music that often pushed the boundaries of their genre. Later in the decade, Atlantic broke into the pop market with The Coasters, Chuck Willis and The Drifters, in a demonstration of not how the label had changed, but how far the audience had moved toward their sound. Meanwhile, in Chicago, Muddy Waters, Little Walter, Otis Rush, and Willie Dixon redefined traditional blues music, taking the chords, patterns, and subject matter from the Mississippi Delta and electrifying/modernizing the sound. Chicago’s Chess Records was not only the home to most of those blues giants, but also promoted a few world class rock ‘n’ rollers named Bo Diddley and Chuck Berry. The legacy of Chess Records, unlike for example Sun, is significantly under celebrated. Meanwhile, the rich and diverse cultural history of New Orleans, with its Caribbean/Creole influences, was demonstrated by Fats Domino, Professor Longhair, Smiley Lewis, Huey “Piano” Smith, Guitar Slim, and Little Richard, reflecting the different rhythmic variations of rocking and rolling. And, there was also this guy in Memphis named Sam Phillips. You probably know that story.

The legacy of 1950s music is so burned into our collective memories that full names are largely extraneous – any rock ‘n’ roller worth their salt knows Elvis, Chuck, Buddy, Jerry Lee, Muddy, and even Hank and Lefty. The blues and rock music released during this decade would become the building blocks for Motown, Stax, and the British rock acts of the following decade. I must admit that in my exploration of the decade I’ve largely ignored jazz music (sorry Miles, Thelonious, Mr. Coltrane) since that genre is so far afield from my expertise. Still, there will be plenty to love as we wind through this musical journey. Have you heard the news? There’s good rockin’ tonight.