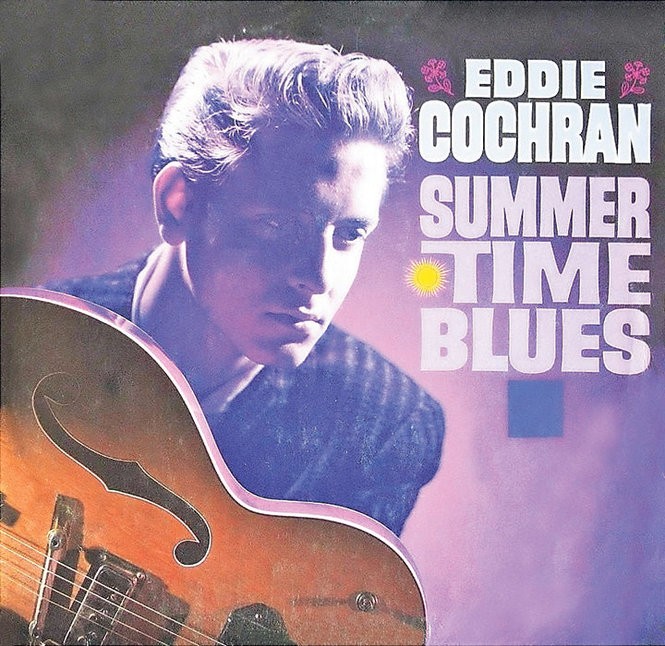 They got some crazy little women there and I’m gonna get me one.

50. “Susie Q,” Dale Hawkins. Songwriters: Dale Hawkins, Robert Chaisson, Stan Lewis, Eleanor Broadwater; #27 pop/#7 R&B; 1957. Dale Hawkins emerged from Shreveport, Louisiana with his swamp rock hit “Susie Q,” which clangs away on percussion with drums and cowbell, then adds the famed lean guitar lick from James Burton. Hawkins, “I am a perfectionist, so I put James through boot camp. He played (the riff) over and over until it was the way I wanted it to sound. I don’t think anyone else could have done it but James. ‘Susie Q’ would not be nearly as good as it is if it hadn’t been for James’ playing.” John Fogerty, “I loved ‘Susie Q.’ I remember hearing it in my mom’s car and just bangin’ away on the dashboard. It has a great riff. GREAT. You’ll notice that James Burton’s name is not among the names of the people credited with writing ‘Susie Q.’ That’s a crime. At least half of that song is that lick.”

49. “Kansas City,” Wilbert Harrison. Songwriters: Jerry Lieber, Mike Stoller; #1 pop/#1 R&B; 1959. Jerry Lieber and Mike Stoller had never been to Kansas City, but knew that Charlie Parker and Count Basie had recorded there, and that was meaningful enough information to inspire their future #1 hit. First recorded in 1952 by Little Willie Littlefield as “K.C. Lovin’,” the song exploded seven years later with hit versions by Little Richard, Rocky Olson, the Midnighters, and, most famously, North Carolina native Wilbert Harrison. The songwriting process was not easy. Jerry Leiber, “I had a beef with the song, Mike was playing a tune and I said, ‘That’s really corny, it sounds like Benny Goodman or something, let’s do something that’s really original.’ And he said, ‘Like what?’ (Leiber sings a bluesy version). He said, ‘I don’t like that, that’s like a hundred other blues.’ He said, ‘Who writes the music?’ I said, ‘You do.’ And he wrote it the way he wanted and I came into it and we had a smash.” Mike Stoller, “I wanted to make it have a melody that sounded like it could have come out of a little band in Kansas City, and so that if it was played as an instrumental, you’d still know what it was instead of just kind of 12-bar blues.” It would take Wilbert Harrison a decade to return to the Top 40 charts, a fine appearance with his 1969 call for unity “Let’s Work Together,” which became a hit for Canned Heat in the U.S. and for Bryan Ferry (retitled as “Let’s Stick Together”) in the U.K.

48. “Lonely Avenue,” Ray Charles His Orchestra and Chorus. Songwriter: Doc Pomus; #6 R&B; 1956. Ray Charles hits a pure blues groove, reinforced by the New York female vocal trio The Cookies, about his terminal sadness on “Lonely Avenue.” Doc Pomus biographer Alex Halberstadt, “The song had a rhythm like someone stomping his feet. The singer’s voice sounded desperate and hoarse.” Ray Charles biographer Mike Evans stated, “’Lonely Avenue’ sends the most shivers down the spine, a doomy mid-tempo blues in which the only let-up from the bleak lyrics is David ‘Fathead’ Newman’s authoritative tenor (sax) break.” Released nine months after “Heartbreak Hotel,” it was easy for listeners to hear the familiarity in the themes. Dr. John (Mac Rebennack) thought the song was chemically inspired. Songwriter Doc Pomus, “Mac always said that was the ‘junker blues’ – junker being the old term for junkie. It’s a certain kind of monotonous, sad, melodic, and lyrical line that, because of the continuity involved, for some reason has always attracted junkies. Da-dum, da-dum, da-dum, I imagine they are shuffling along to it. Mac told me, (he) thought I was a junkie. They said somebody who wasn’t could never have written ‘Lonely Avenue.’ Mac couldn’t believe how straight I was.”

47. “(We’re Gonna) Rock Around the Clock,” Bill Haley and the Comets. Songwriters: Max C. Freedman, James E. Myers; #1 pop/#3 R&B; 1955. Bill Haley was somewhat of a rock ‘n’ roll oddity. He was blind in one eye and spent years as a Western swing cowboy yodeler before taking his spit curl to the pop charts. He scored fifteen Top 40 singles from 1953 to 1957, first finding fame with the repetitious shout along number “Crazy Man, Crazy,” which sounds like a weird marriage of rock, jazz, and Western swing. “Rock Around the Clock,” Haley’s signature song, was first recorded by a Pennsylvania novelty act named Sunny Dae and His Knights. With a melody borrowed from Hank Williams’ “Move It on Over,” Haley brought the sound of rock music into the mainstream, although it was a slow process. The song was originally released in May of 1954 and didn’t become a major hit until it was used in the intro of the 1955 social commentary film “Blackboard Jungle.” While “Rock Around the Clock” may sound tame today, it must have sounded revolutionary sandwiched between the #1 singles “Cherry Pink (And Apple Blossom White),” by big band leader Perez Prado and Mitch Miller’s militaristic take on “Yellow Rose of Texas.” Author David Cantrell describing the triumph, “Danny Cedrone plays a hypertensive electric-guitar solo that squeals and vibrates and is pure, beautiful noise. Joey D’Ambrosio, on saxophone, blats his simple line on repeat as if he’s only this moment learned to play. Everything – the chanted lyric, the acoustic guitar, the slapped bass, the skittering drums, and (a reminder of the group’s country-and-Western origins) the ‘lightning strike’ pedal-steel guitar – are all about the beat, the beat, the beat. Like nothing else on pop radio, Haley’s call to his girl is experienced collectively, a generation’s imperative to move.”

46. “Folsom Prison Blues,” Johnny Cash. Songwriter: Johnny Cash; #4 country; 1955. In 1953, songwriter/pianist/arranger Gordon Jenkins released “Crescent City Blues,” which was sung by Beverly Mahr and written from the perspective of a lonely woman imagining the better life that people leaving Crescent City, via train, are experiencing (“I see the rich folk eating in a fancy dining car/They’re probably having pheasant breast and eastern caviar”). Johnny Cash took many of the lyrics directly from “Crescent City Blues” for “Folsom Prison Blues,” rewriting from the point of view of a prisoner who famously “shot a man in Reno/just to watch him die” and restructured the song from a 12-bar blues number to his bare-boned country approach. (A lawsuit later resulted in a $75,000 settlement for Jenkins, which was probably pennies on the dollar compared to the royalties and publishing earnings of the song). Cash had a bigger hit with the song in 1968 as a single from his “At Folsom Prison” album, topping the country charts and crossing over to the pop Top 40. Cash’s various associations with Folsom prison made him both a country music outlaw and someone who embodied the concept of cultural empathy.

45. “Summertime Blues,” Eddie Cochran. Songwriters: Eddie Cochran, Jerry Capehart; #8 pop/#11 R&B; 1958. Eddie Cochran’s teenage ambitions are thwarted in all directions on “Summertime Blues,” from working long hours that interferes with his romantic life, being unable to borrow the family car, and having no political clout as someone too young to vote. Author John Collis, “’Summertime Blues’ is built of the simplest music ingredients, assembled with genius. Cochran elects to stress the chord structure (there are as many as three of them) by preferring his Martin to his Gretsch. Connie “Guybo” Smith is plugged in, however, pinning the song to his snarling bass line, and (drummer) Earl Palmer drives it along with rifle-shot precision. The chosen tempo is perfect – fast enough to let it rock, slow enough to allow the tale of teenage frustration time to brew in the listener’s mind.” Cochran’s bass singing used when voicing authority figures was inspired by the character of George “Kingfish” Stevens from the “Amos ‘n’ Andy” radio and television series.

44. “Shout,” The Isley Brothers. Songwriters: O’Kelly Isley, Jr., Rudolph Isley, Ronald Isley; #47 pop; 1959. The Isley Brothers left Cincinnati for New York in 1957 (lead singer Ronald Isley was 16 years old at the time) and had their first charting hit with “Shout,” a mixture of gospel and R&B that created the subgenre of “frat rock.” Ronald Isley, “During one of our performances at the Uptown Theater (in Philadelphia), I was singing ‘Lonely Teardrops’ when I saw that everyone in the audience was standing up and really getting into it. The place was packed and the audience was yelling their approval, like at church. The energy level was so strong that I didn’t want to end the song yet. I began to ad-lib, the way Jackie did: ‘You know…you make me wanna shout’ and the band picked right up on it with that galloping beat. The people standing went crazy, and I began to ad-lib more lines, like ‘Kick my heels up’ and ‘Throw my hands up’” I’d wait a second at the end of each line so my brothers and the audience had a chance to answer me with ‘Shout!’ That song just took over.”

43. “Heartaches by the Number,” Ray Price. Songwriter: Harlan Howard; #2 country; 1959. Ray Price was known for his ability to spot and develop talent – at various times Willie Nelson, Johnny Bush, Roger Miller, and Johnny Paycheck worked in his band. Price and Ernest Tubb had reworked the Harlan Howard composition “Pick Me Up on Your Way Down” for a Charlie Walker hit in 1958. Price gave Howard, the Nashville Songwriters Hall of fame member who famously defined country music as “three chords and the truth,” his second Top Ten country hit in 1959 with the two-step friendly, upbeat yet downhearted “Heartaches by the Number,” perhaps the signature song from Price’s honky tonk era. Price on Harlan Howard, “They were down-to-earth (songs). They wasn’t accusatory kind of songs, they wasn’t drunken songs, they was just love songs. His songs fit me to a T, and I recorded a lot of them…. Everything was placed just right, and it wasn’t contrived.”

42. “Wake Up Little Susie,” The Everly Brothers. Songwriters: Felice Bryant, Boudleaux Bryant; #1 pop/#1 country/#1 R&B; 1957. “Wake Up, Little Susie” was the followup single to “Bye Bye Love” and was a bigger success on the pop and country charts. Written by Felice and Boudleaux Bryant, the song is a distressed tale of a teenage couple falling asleep at a drive-in theater, then wondering what ensuing harm might happen to their reputations from their parents and peers. The brilliance in the song is not describing any outcomes, just focusing on the adolescent angst. “Susie” topped the pop charts for one week, but stayed on top of the country charts for two months. She was one sleepy gal.

41. “Peggy Sue,” Buddy Holly. Songwriters: Buddy Holly, Jerry Allison, Norman Petty; #2 pop/#2 R&B; 1957. Jerry Allison, the drummer for Buddy Holly’s Crickets, was in a personal funk after breaking up with girlfriend (and future wife) Peggy Sue Gerron. He successfully appealed to Buddy Holly to change the proposed title of this song from “Cindy Lou” to “Peggy Sue.” The song was originally arranged using a cha-cha beat, but producer Norman Petty suggested that Allison play paradiddles, a rapid strokes drum pattern, that created a rolling rhythm. Petty then accentuated the rhythm by modifying the reverb throughout the recording. Besides his endearing vocals, Holly contributed what music journalist Jimmy Guterman labelled “the greatest rhythm solo in all rock ‘n’ roll.” Peggy Sue Gerron passed away in 2018, once commented on her image, “I think they have me frozen in time, I think when most people think of me, it’s as a young woman frozen in an era that has long passed. But it hasn’t limited me. You have to be you, and I couldn’t stand up and say, well, no, that’s not me.”