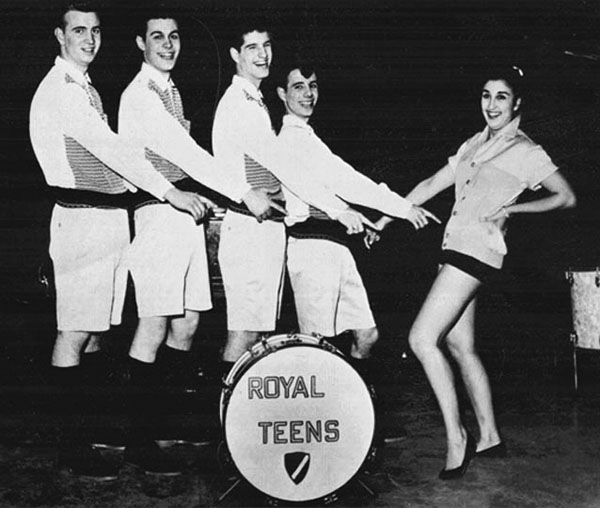 450.  “Bald Head,” Roy Byrd and His Blues Jumpers. Songwriter: Roy Byrd; #5 R&B; 1950. Roy Byrd was better known by his stage name Professor Longhair and is credited with bringing a Caribbean sound into New Orleans piano playing.  He recorded the songs that would be known as his standards in 1949 and 1950, including “Tipitina,” “Go to the Mardi Gras,” “Mardi Gras in New Orleans,” and the comedy number “Bald Head,” his only chart hit.  Dr. John on growing up in New Orleans, “Professor Longhair, Roy Brown, and Dave Bartholomew were heroes of mine. I knew their records, and saw posters all over town bearing their names and pictures. Professor Longhair, in particularly moved me. His songs ‘Tipitina’ and ‘Bald Head’ were played all over town. I remember one time peeking into a window and watching him from the back as his long, thin fingers ran across the keys.”

449.  “I Promise to Remember,” Frankie Lyman and the Teenagers. Songwriters: Jimmy Castor, Jimmy Smith; #57 pop/#10 R&B; 1956. Jimmy Castor gained fame in the 1970s with the pop funk hits “Troglodyte” and “Bertha Butt Boogie,” but had penned the doo wop number “I Promise to Remember” for his teen outfit Jimmy Castor & The Juniors in the mid-50s. A still thirteen-year-old Frankie Lyman let his tenor soar on this romantic devotion number, but his time as a pop star was quickly fading.  A remembrance from Jimmy Castor, “‘Our block was always full of girls wanting to see the Teenagers – I lived on 165th Street, Frankie on 166th, Sherman (Garnes, the Teenagers’ basso voice) on 165, The Ronnettes on 168. I remember ‘Why Do Fools Fall in Love?’ becoming this huge hit, making them the first supergroup of color, them getting on big buses and going off to tour. Seeing all that I knew music was what I wanted to do. When Frankie covered ‘I Promise to Remember’ my first check was for $2500! Man, my family shifted straight out of the ghetto! No more living amongst ‘roaches and rats!’”

448.  “We Belong Together,” Robert and Johnny. Songwriters: Robert Carr, Johnny Mitchell, Hy Weiss; #32 pop/#12 R&B; 1958. Robert Carr and Johnny Mitchell were a Bronx doo wop duo who had their sole significant hit with the slow jam “We Belong Together,” a song later covered by Ritchie Valens, The Belmonts, and Los Lobos, among others. As rock critic Ritchie Unterberger observered, “They had a pleasingly distinctive contrast between their closely harmonized voices (one smoky, one nasal).” Credited songwriter Hy Weiss was the owner of Old Town Records and was rumored to have mafia connections, perhaps due to growing up with and being in the same business as Morris Levy.  Weiss once commented that he only painted three walls in his office, so recording artists wouldn’t think that he had extra money to splash around.

447.  “You’re Humbuggin’ Me,” Rocket Morgan.  Songwriters: Rocket Morgan, J.D. Miller; Did Not Chart; 1958. “You promised me chicken and pork roast/But you give me sour milk and burnt toast.” Rodderick “Rocket” Morgan recorded in Crowley, Louisiana, the home of producer J.D. Miller and, one suspects not coincidentally, Zynn Records.  Pianist Morgan is best known for the original version of “You’re Humbuggin’ Me,” later recorded by Lefty Frizzell, The Fabulous Thunderbirds, Sleepy LaBeef, and Johnny Winter, among others.  Morgan sings about his dissatisfaction with a female manipulator on “Humbuggin’,” while his drummer seems to be trying out for an experimental jazz gig. Little is known about this Rocket man, who recorded for a few years, then reportedly became a preacher.

446.  “Short Shorts,” The Royal Teens. Songwriters: Tom Austin, Bill Crandell, Bill Dalton, Bob Gaudio; #3 pop/#2 R&B; 1958. Years before Bob Gaudio became one of the primary creative forces behind The Four Seasons, as well as a successful producer, he found fame at the age of fifteen as a member of the Royal Teens.  More of an earworm chant than a song, this wolf whistle ode to daring clothing managed to capture the sexuality of teen rock ‘n’ roll in a way that was more playful than lascivious.  Gaudio, “I came from a classical jazz background when I was a kid and crossed over with something as simple as ‘Who Wears Short Shorts.’ And once that ball started to roll, I never looked back.”

445.  “Lovin’ Machine,” Wynonie Harris. Songwriters: Dave Lambert, O.O. Merritt; #5 R&B; 1952. Wynonie Harris, who spoke of lust to the R&B masses like no other man during his era (listen to “Lollipop Mama” and “I Like My Baby’s Pudding” for more proof of concept), had his last charting single with “Lovin’ Machine.”  The astute listener may discern that Harris is using a euphemism for his own libido on this jump blues rocker.  The honking sax solo from Hal “Holley Dismukes,” who was reportedly influenced greatly by Charlie Parker, is the song’s highlight.  Also, note the reference to the product known as “Hadacol.”  Hadacol was a “vitamin supplement” that just coincidentally contained 12% alcohol and sold like gangbusters in Southern dry counties during the early 1950s. How did Hadacol get its name?  Its inventor “had to call” it something.

444.  “Hot Rod Race,” Arkie Shibley and His Mountain Dew Boys. Songwriter: George Wilson; #5 pop; 1951. Automobile culture began finding its way into popular music in 1951 with Arkie Shibley’s “Hot Rod Race” and Hank Williams bragging about his “hot rod Ford” in “Hey, Good Lookin’.”  Northwest Arkansas native Jesse Lee “Arkie” Shibley relocated from the Ozark Mountains to Bremerton, Washington, in 1948 and quickly landed a radio gig.  He had his only hit single with “Hot Rod Race,” a comedy song structured similarly to Woody Guthrie’s talking blues repertoire, wherein a Ford and Mercury are eventually humbled in a street race by a “hopped up Model-A.” “Hot Rod Race” would later inspire the answer song “Hot Rod Lincoln,” which hit the country charts in 1960 as a country release by Charlie Ryan and hit the pop charts for Johnny Bond.  Arkie Shibley released several more singles with the same motorvatin’ theme, but never reached the charts again.  He passed away in 1975, long after his brief lap with fame ended, in Van Buren, Arkansas at the age of 60.

443.  “Kaw-Liga,” Hank Williams. Songwriters: Hank Williams, Fred Rose; #1 country; 1953. On January 1, 1953, Hank Williams, the man who had completely transformed country music with his deeply personal lyrics and heartfelt vocals, died at the age of 29.  During the 1940s, Bob Wills had brought an unmatched spirit to the genre; Williams brought a depth of soul that perhaps has never been matched.  After his death, MGM released singles for several years, with three of those releases going to #1.  His biggest posthumous hit was “Kaw-Liga,” which topped the charts for either 13 or 14 weeks (sources vary).  A collaboration between Williams and Fred Rose, the lyrics relate the unconsummated love affair between two wooden Indian statues.  Nashville studio musician Tommy Jackson’s grave is inscribed with the words “World’s Greatest Fiddler.”  Whether that’s true or not, he makes a valid argument for that honor here.

442.  “Can’t We Be Sweethearts?,” The Cleftones. Songwriters: George Goldner, Herb Cox; Did Not Chart; 1956. From the Rolling Stone Album Guide, “’Can’t We Be Sweethearts?’ prefigures the sort of harmony and lead arrangements that worked so well years later for Dion and the Belmonts.”  This could-a-been-a-contender doo wop rarity was used in the opening scene of Martin Scorsese’s mob flick “Goodfellas.” Author Hardeep Phull, “’As far back as I can remember, I always wanted to be a gangster.’ So goes the opening line of Henry Hill’s narration in ‘Goodfellas,’ before a rose-tinted sequence details his earliest days as the mob’s errand boy. Almost all of it is married to a glorious mix of doo-wop hits and obscurities, punctuated in particular by the little-known Queens group the Cleftones and their song ‘Can’t We Be Sweethearts.’ It takes less than five minutes of the film to know that Scorsese is letting his encyclopedic pop-music knowledge run wild in ‘Goodfellas.’”

441.  “Trouble,” Elvis Presley. Songwriters: Jerry Lieber, Mike Stoller; Did Not Chart; 1958. The kitsch factor is immeasurable in “Trouble,” a green-eyed mountain jack of hyperbole number with homages to New Orleans jazz in the instrumental breaks.  Mike Stoller, “We had written songs like that before – “Riot In Cell Block #9” (by the Coasters), “Framed” (by the Robins), kind of talking blues things. We knew Elvis could do that kind of stuff. That track captured less of the happy-go-lucky Elvis. it carried a menacing undercurrent of sexuality and danger. It was braggadocio, like John Henry, Paul Bunyan – one of those bigger-than-life folk heroes.” Elvis performed the beginning of “Trouble” on his 1968 “Comeback Special,” looking into the camera with a tight shoot, appearing as though he was ready to conquer the world through sheer personal magnetism.