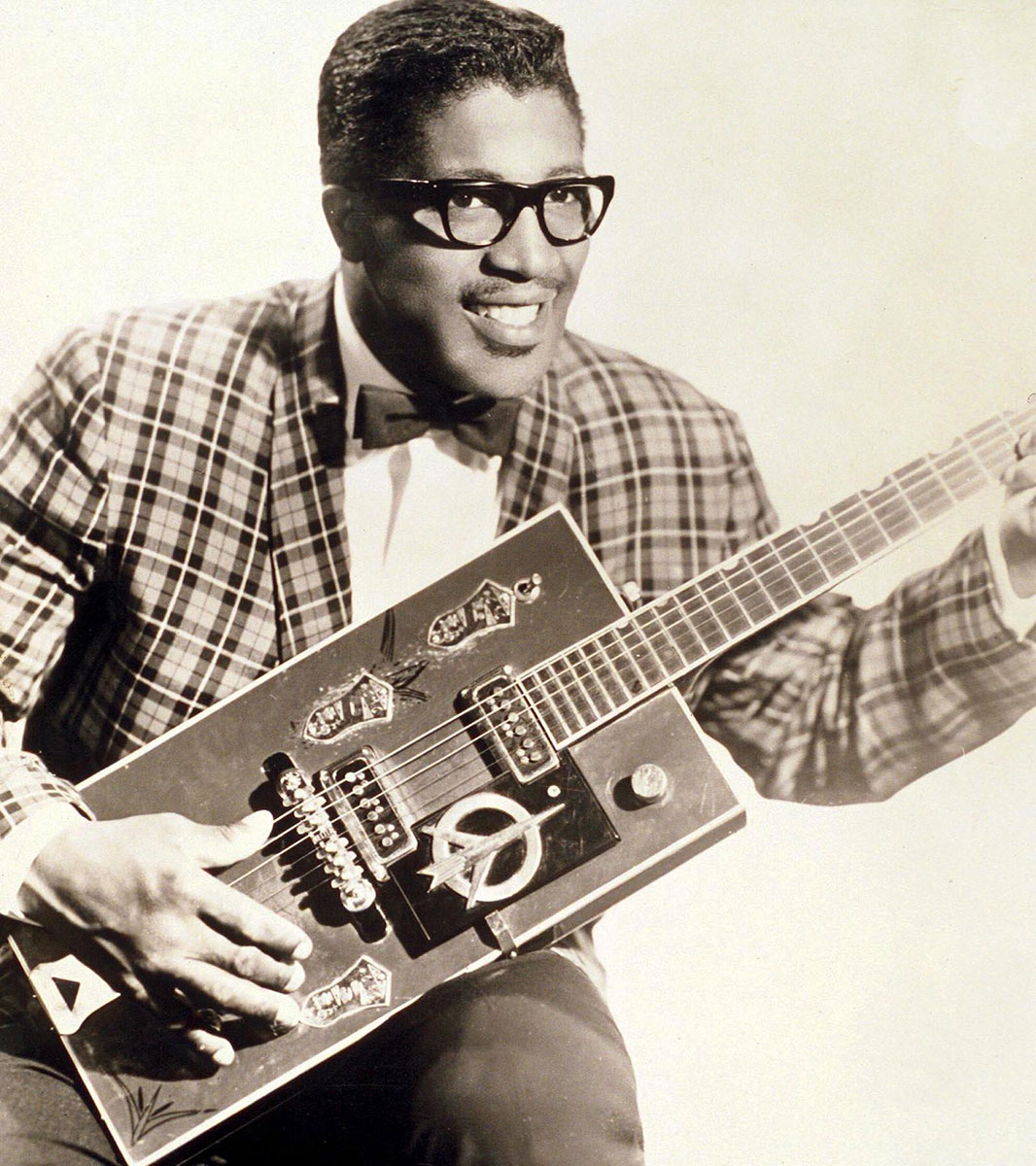 Come with me, my love/To the sea, the sea of love

40. “Life is So Peculiar,” Louis Armstrong with Louis Jordan and His Tympany Five. Songwriters: Jimmy Van Heusen, Johnny Burke; Did Not Chart; 1950. Armstrong is generally defined as a premiere innovator and Jordan is generally defined a premiere entertainer, but our Louie Louie’s had their brass in both endeavors. Penned by lyricist Johnny Burke (of “Swinging on a Star” fame) and musician Jimmy Van Heusen (of “Love and Marriage” fame), Armstrong and Jordan perform with a level all encompassing joy that would make a three day old corpse smile on “Life is So Peculiar.” It feels like Armstrong and Jordan are competing on who can project the most happiness on record and the winner is the listener.

39. “Bo Diddley,” Bo Diddley. Songwriter: Elias McDaniel; #1 R&B; 1955. Bo Diddley had his first and biggest R&B hit with a song title that replicated his stage name and featured not only his famous beat but beautiful waves of tremolo guitar work. Author Ed Komara, “The rhythm was traditionally known as either ‘hambone,’ ‘patting juba,’ or ‘shave and a haircut, two bits.’ Long exercised in African American folklore, this rhythm was well known enough in many cultures to be invoked or imitated. The English operetta creators Gilbert and Sullivan mentioned it in their 1888 success ‘The Yeoman of the Guard.’ It was embedded in such songs as ‘At a Darktown Cakewalk’ (composed by Charles Hale, 1899) and ‘Jesus Got His Arms All Around Me’ (as heard in the performance recorded by the Delta Big Four for Paramount Records in 1930). Claims for relevance to the Cuban claves and the Latin rhumba have also been made. If none of these uses is the origin of that rhythm, at least they show how widespread the rhythm had spread across America. When the guitarist Bo Diddley brought that rhythm from the background to the front and center, he was going to have a massive hit.” Rolling Stone magazine stated that “Bo Diddley,” “Immortalized the bedrock beat that would power everything from Buddy Holly’s ‘Not Fade Away’ to the Smiths’ ‘How Soon Is Now.’”

38. “Blue Suede Shoes,” Carl Perkins. Songwriter: Carl Perkins; #2 pop/#1 country; 1956. Carl Perkins grew up in a poor sharecropping family in West Tennessee, learning his trade on homemade and second hand guitars. He began performing in local clubs as a young teenager and spent years splitting his time between day jobs and music gigs. After hearing the Elvis version of “Blue Moon of Kentucky,” he sought out Sam Phillips for an audition at Sun Records. Johnny Cash had suggested that Perkins write a song about suede shoes, referencing how one of Cash’s military peers referred to his footwear. Although “Blue Suede Shoes” is frequently thought of as an Elvis song, Perkins had the bigger hit with his composition – peaking at #2 on the pop charts and #1 on the country charts.

37. “You Win Again,” Hank Williams. Songwriter: Hank Williams; #10 country; 1952. The tumultuous marriage between Hank and Audrey Williams ended in divorce on July 10, 1952. On July 11, 1952, Hank Williams recorded “You Win Again” (the song was originally titled “I Lose Again,” but Fred Rose changed the lyric). Hank’s declaration of defeat/disgust (“You have no heart/You have no shame”) and pain dripping vocal was placed on a b-side that became a Top Ten country hit. Jerry Lee Lewis scored an even bigger hit with “You Win Again” in 1957, which was only a mere five years according to the calendar but a completely different pop culture universe had been created by that time.

36. “Shake, Rattle, and Roll,” Big Joe Turner. Songwriter: Jesse Stone; #1 R&B; 1954. Kansas City native Joe Turner had been recording since the late 1930s, but had his signature song right before the rock ‘n’ roll era exploded. Authors Jim Cogan and William Clark, “The rumbling bass plays what would become the quintessential rock and roll line. Turner was at his comical, storytelling best. (Jesse) Stone’s lyrics drip with folk wisdom and humor, as if ripped from the pages of a Zora Neale Hurston story. To many music critics, this song was the pistol shot that started the rock and roll craze, which is ironic, because this version, and the even more familiar cover by Bill Haley and the Comets, were recorded by comfortably middle-aged men. Nevertheless, Joe Turner’s record, with its original suggestive lyrics (‘I’m like a one-eyed cat peepin’ in a seafood store’) still packs the punch of a heavyweight rocker.”

35. “Need Your Love So Bad,” Little Willie John. Songwriter: John Mertis, Little Willie John; #5 R&B. Little Willie John gives a clinic on soul singing on this 1955 R&B hit. Author Susan Whitall, providing the historical context, “He was still two months shy of this 18th birthday, but Willie infused ‘Need Your Love So Bad’ with a smoky, late night sadness, as if he’d been loving and losing women for decades. Hearing it today, we take the gut-wrenching soul emotion of the vocal for granted, the way it takes the listener into the back rows of the black church, out the back door and to the juke joint in the woods. But in 1955, they weren’t calling this sound soul, not yet. In terms of pop music it was still underground, a unique amalgam of gospel, blues and rhythm & blues bubbling up from the mysterious, unexplored depths of black culture.” From the “All Music Guide to the Blues,” “’Need Your Love So Bad’ contains one of the most intimate, tear-jerking vocals ever caught on tape.”

34. “Ruby, Are You Mad?,” The Osborne Brothers & Red Allen. Songwriter: Cousin Emmy; Did Not Chart; 1956. Sonny and Bobby Osbourne were raised in southwestern Ohio and formed their band after Bobby served in the Korean War. (Sonny, who was not drafted, worked for Bill Monroe in the early 1950s). Their sound was progressive bluegrass for its era, incorporating electric and percussion instruments; vocally, they were known for their stacked harmonies. The Osborne Brothers had several minor hits in the late 1960s/early 1970s and are best known for their version of Boudleaux and Felice Bryant’s “Rocky Top.” “Ruby,” most commonly known as “Ruby, Are You Mad at Your Man?,” was first recorded by Cousin Emmy and Her Kinfolk in 1946 (Cousin Emmy being the stage name of Kentucky born banjo player Cynthia May Carver). Red Allen was a Kentucky based bluegrass guitarist and tenor singer who joined the Osborne Brothers in 1956. Ok, enough bio – the Osborne Brothers sound like a bluegrass thunderstorm on “Rudy, Are You Mad?” while Allen does some of the most distinct, consonant extending singing in the history of the genre. It sounds like blissful madness.

33. “Rave On,” Buddy Holly. Songwriters: Sonny West, Bill Tilghman, Norman Petty; #37 pop; 1958. A-weh-uh-heh-uh-ell, Buddy Holly may not have written this number and it was first released by Sonny West, but he told producer Norman Petty that he had to have this song and he put his best hiccupping vocal on the track. Being such a spirited rock ‘n’ roll outing, “Rave On” became attached to Holly’s image and was used as a title of a 2011 tribute album to The Bespectacled One, even though it was a minor pop hit. Author Philip Norman, “His playing style became as influential as his voice – the moody drama he could conjure from a shifting sequence of four basic chords, his incisive downstrokes and echoey descants. The deification of the rock guitarist, the sex appeal of the solid-body guitar, the glamour of the Fender brand: all were set in train by Buddy and his sunburst Strat.”

32. “Good Golly, Miss Molly,” Little Richard. Songwriters: John Marascalco, Robert Blackwell; #10 pop/#4 R&B; 1958. Little Richard took Ike Turner’s piano riff from “Rocket 88” and went Top Ten on the pop charts with a lyric about how much his woman enjoyed having sex. Author Avram Mednick, “’Good Golly, Miss Molly’ perfectly suited Richard’s hedonistic approach to performing, with his twisted sexuality, costumes, make-up and pompadour, and gospel-influenced delivery complete with screaming. I mean, ‘sure like to ball?!’” Rolling Stone, “Each time he exclaims the title you’d think he just thought it up on the spot.”

31. “Sea of Love,” Phil Phillips with the Twilights. Songwriters: Phil Phillips, George Khoury; #2 pop/#1 R&B; 1959. Lake Charles, Louisiana native Phillip Baptiste penned “Sea of Love” with assistance from record executive Eddie Shuler on the arrangement. Baptiste, who was inspired to write the song to impress a love interest, “She really didn’t believe in me. But I felt if I could sing about it – a sea of love where it’s quiet and peaceful – I could really show her how much I loved her and cared for her.” After the song was recorded, the singer had a new name and the producer had a writing credit. In fact, Phillips was so bitter about being taken advantage of financially, he refused to pursue a career in music. “Sea of Love” is an incredibly simple song lyrically, but the metaphorically mystery of the title along with the seductive chord profession have captivated pop audiences for decades. Robert Plant, under the ad hoc studio aggregation The Honeydrippers, took the song to #3 on the pop charts in 1985 and a 2000 cover by Cat Power is her most popular song.