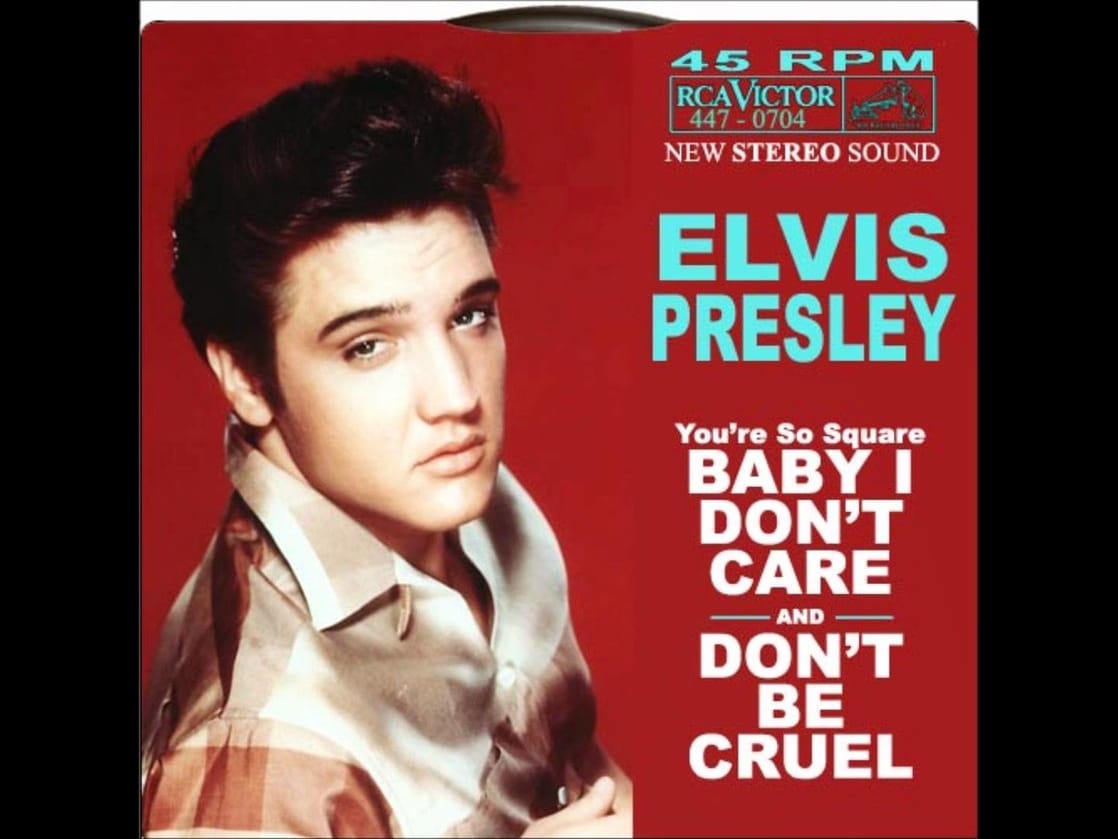 370. “Cry! Cry! Cry!,” Johnny Cash and the Tennessee Two. Songwriter: Johnny Cash; #14 country; 1955. Johnny Cash was raised in poverty in Dyess, Arkansas (a farming community established as part of President Franklin D. Roosevelt’s New Deal economic stimulus program). He began playing guitar and writing songs at the age of twelve and joined the nascent U.S. Air Force at the age of eighteen. After completing four years in the service, he moved to Memphis and was signed by Sun Records. Asked to write a commercial record by Sam Phillips, Cash penned “Cry! Cry! Cry!,” which established the famous Johnny Cash chunka chunka rhythm sound. This ode to a lying, sugar daddy seeking woman met the wishes of Mr. Phillips, becoming a #14 country single.

369. “This Weary Heart You Stole Away (Wake Up, Sweetheart),” The Stanley Brothers and the Clinch Mountain Boys. Songwriter: Carter Stanley; Did Not Chart; 1953. The Stanley Brothers were an influential bluegrass act, but they had limited chart success. After recording for Columbia Records from 1949 to 1952, they began a four-year association with Mercury Records in 1953. Thematically, “This Weary Heart You Stole Away” is a complaint about a morally ambiguous female. (One wonders if their request to “wake up, sweetheart” was an inspiration for “Wake Up Little Susie,” but I’ve found no direct link). Keith Whitley and Ricky Skaggs cut a cover version of “This Weary Heart” when they worked with The Stanley Brothers as teenagers in 1971.

368. “(If You Cry) True Love, True Love,” The Drifters. Songwriters: Doc Pomus, Mort Shuman; #33 pop/#5 R&B; 1959. The history of The Drifters is filled with intrigue. Based upon a contract dispute, Ben E. King recorded in the studio with the group, but wasn’t a regular touring member. Johnny Lee Williams served as first tenor for a short time on the road and took a lead vocal turn on “(If You Cry) True, True Love.” Lieber and Stoller handled production duties, using the string section and backing vocals as beguiling ear candy. Author Joel Selvin on the partnership of Stoller and arranger Stan Applebaum, “They built a sumptuous, soaring carpet of sound, littered with tinkling, glistening percussion – bells, triangles, gourds, shakers. King Curtis played the sax break. These men were making records that sounded like no records ever did. They were lustful, ambitious musicians moving into wondrous realms entirely of their own creation.” When a 1960 tour landed in Johnny Lee Williams’ hometown of Mobile, Alabama, he decided that was the perfect opportunity to leave the band.

367. “City Lights,” Ray Price. Songwriter: Bill Anderson; #1 country; 1958. Bill Anderson was a journalism major at the University of Georgia in the late 1950s, who worked part time as a disc jockey and recorded for a small label. One of his first recordings was “City Lights,” which Ray Price brought into his shuffle world of loneliness and made a #1 country single. The production values sound like an early version of the much maligned “countrypolitan” sound. “City Lights” returned to #1 with Mickey Gilley’s 1975 cover version and songwriter Anderson has credits on twelve #1 country singles as a songwriter or performer, spanning from 1958 to 2006.

366. “The Chicken and the Hawk (Up, Up and Away),” Big Joe Turner and His Blues Kings. Songwriters: Jerry Leiber, Mike Stoller; #7 R&B; 1956. “The Chicken and the Hawk,” a “high flying blues that Jerry and I had written about the perils of love,” in the words of Mike Stoller, was in the same vein musically as Big Joe Turner’s 1954 #1 R&B hit “Shake, Rattle and Roll.” Atlantic’s Jerry Wexler remembering the recording session for this jump blues hit, “(Leiber was) Mr. Disorderly, a charming mess. Extravagantly verbal, always in a flamboyant dither.” On the other hand, “With his Robert Oppenheimer visage, the huge forehead and penetrating eyes, Stoller was the taciturn virtuoso, an enigmatic keyboard wizard who looked as though he’d just arrived from Venus or Jupiter.” May we all be remembered someday with such colorful language.

365. “Philippine Blues,” Country Jim. Songwriter: James Bledsoe; Did Not Chart; 1950. James Bledsoe (a.k.a., Country Jim) was a Louisiana bluesman who is ready to cross the ocean to retrieve his woman on his 1950 single “Philippine Blues.” Geography was an integral part of Bledsoe’s repertoire, he sang about Shreveport roads and neighborhoods in his songs “Travis Street Blues,” “Texas Street Blues,” and “Hollywood Blues.” His post recording life remains a mystery, but he was ahead of his time in writing about wartime Asian love sickness. From the book “Shreveport Sounds in Black and White” regarding the transitional nature of blues during this era, “Though Bledsoe must be considered a country blues stylist, his song titles and lyrics reflect a growing urban sensibility.” His guitar sound is raw enough to scrape the enamel off a pit bull’s incisors.

363. “Leave My Kitten Alone,” Little Willie John. Songwriters: Little Willie John, James McDougal, Titus Turner; #60 pop/#13 R&B; 1959. Conceptually, “Leave My Kitten Alone” isn’t rocket science, but it may involve some biology. See, Little Willie John has a kitten. A big fat bulldog is attempting to trespass on his kitten rights. Drama ensues. Little Willie John biographer Susan Whitall, “Willie’s vocal, even subverted by a cheesy female ‘meow’ chorus, is more muscular and assured than ever, the essence of male threat. Despite the laugh in his voice, he sounds convincing. It’s a virtuoso vocal performance, with Willie singing in his chesty, meatier mid-range, then swooping up effortlessly from his high tenor to what would be a falsetto for a lesser mortal. When he makes that vocal run upward, it creates a change in barometric pressure that raises the hair on the back of your neck.”

362. “Honky Tonk Man,” Johnny Horton. Songwriters: Johnny Horton , Tillman Franks, Howard Crockett; #9 country; 1956. Johnny Horton was raised in East Texas, although his family often migrated to California for manual farming work. He started writing songs in the late 1940s and began his recording career in 1951. Horton met Hank Williams when performing on the “Louisiana Hayride” in 1952 and would later marry his widow, Billy Jean Jones. (Hot commodity Billy Jean also once dated Faron Young and had an affair with Johnny Cash. Perhaps, in terms of attractiveness, she was more like a beauty queen. From a movie scene.) Horton’s first hit was “Honky Tonk Man,” a rockabilly number quite dissimilar from his signature songs, such as “The Battle of New Orleans” and “North to Alaska.” “Honky Tonk Man” went to #9 for Horton in 1956 and posthumously went to #11 when rereleased in 1962. It was also the first charting single for Dwight Yoakam, peaking at #3 in 1986.

361. “(You’re So Square) Baby I Don’t Care,” Elvis Presley. Songwriters: Jerry Lieber, Mike Stoller; #14 R&B; 1957. Jerry Lieber and Mike Stoller wrote four songs for the 1957 Elvis film “Jailhouse Rock,” including this playful number that was later covered by Buddy Holly, Cliff Richard, and Bobby Fuller, among others. Stoller, “(You’re So Square) Baby I Don’t Care” was the most fun because by then Elvis was deep into our producing style. Our style wasn’t anything more than being loose and fun. Elvis’s initial shyness had totally melted away and he was completely in the spirit of the music. He actually picked up an electric bass and kicked off the intro. It pleased me to no end that even when we thought we had a perfect vocal take, Elvis would want to do another – and then another. Each one would be better. He was digging deep and coming up with great new ammunition.”