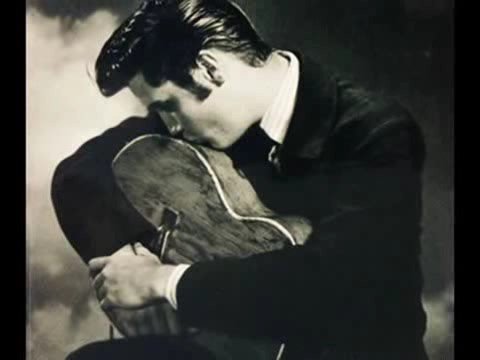 New York, Los Angeles, oh, how I yearned for you.

30. “Carol,” Chuck Berry. Songwriter: Chuck Berry; #18 pop/#9 R&B; 1958. “Carol” is a distillation of teen romantic angst hooked by the line, “Don’t let him steal your heart away,” carried by the Berry classic guitar riff and his fleet fingered fills. The narrator knows he must learn how to dance to keep his love and fully intends to do so. Authors Phillippe Margotin/Jean-Michel Guesdon, “’Carol’ is an ode to adolescence, with the inevitable sleek automobiles, rock ‘n roll dancing joints, and, of course, the exaltation of female sensuality. To put it in a nutshell, it is a song on which the Chuck Berry legend was founded.” The Rolling Stones covered “Carol” on their 1964 debut album and the song resulted in a fascinating alpha male showdown between Berry and Keith Richards in the 1987 film “Hail! Hail! Rock ‘n’ Roll.”

29. “Mystery Train,” Elvis Presley. Songwriter: Junior Parker; #11 country; 1955. Delta blues musician Herman “Junior” Parker performed with Howlin’ Wolf, Bobby “Blue” Bland, and B.B. King in the late 1940s/early 1950s. He recorded for Sam Phillips in 1953, releasing his composition “Mystery Train” at that time (his Sun Records cut “Feelin’ Good” was a #5 R&B hit and was most likely the template for the 1977 Brownsville Station single “Martian Boogie”). “Mystery Train” recorded by Elvis is impenetrable in terms of meaning. Billy Black and Scotty Moore provide perfect accompaniment, building a mood of tense urgency without competing with the vocalist. Rolling Stone, “Much of the song’s lasting appeal comes courtesy of the almost otherworldly tone that Moore pulled from his trusted Gibson ES-295. ‘Mystery Train’’ became like a signature thing for me,’ Moore explained. ‘That was the first one I played through my custom-made amplifier. It had the same slapback effect that Sam had been using on the overall record.’” Sam Phillips, “It was the greatest thing I ever did on Elvis. It was a feeling song that so many people had experienced – I mean, it was a big thing, to put a loved one on a train. Are they leaving you forever? Maybe they’ll never be back. ‘Train I ride, sixteen coaches long’ – you can take it from the inside of the coach, or you can take it from the outside, standing looking in. It was pure rhythm. It was a fucking masterpiece!”

28. “Why Don’t You Love Me,” Hank Williams with his Drifting Cowboys. Songwriter: Hank Williams; #1 country; 1950. Another relationship soap opera song from Hank, highlighting his artful simplicity and his keen sense of humor. In this one, he concedes that he’s a little bit of trouble. Bob Dylan, “I tried to sing everything he would sing. Hank Williams was the first influence…I guess for a longer period of time than anyone else. Even at a young age, I identified fully with him. I didn’t have to experience anything Hank did to know what he was singing about.”

27. “Rock and Roll Music,” Chuck Berry. Songwriter: Chuck Berry; #8 pop/#6 R&B; 1957. Chuck Berry, “I was heavy into rock & roll and had to create something that hit the spot without question. I wanted the lyrics to define every aspect of its being.” Berry used a rumba rhythm to define his love for rock ‘n’ roll, while lyrically disavowing modern jazz, tangos, and mambos. Music historian Ed Ward, “’Rock and Roll Music’ was the teenage anthem America had been waiting for – a celebration of the music’s central place in teen life, a declaration of independence, and a performance like Berry had never given before, with guitar pyrotechnics supporting a great lyric. He made it perfectly clear: he had nothing against other types of music, provided they were well played, but ‘It’s gotta be rock and roll music/If you wanna dance with me.’ And what teenager in his or her right mind could disagree?” The original version of “Rock & Roll Music” went to #8 in 1957 and The Beach Boys peaked at #5 with their 1976 cover. Best cover – The Manic Street Preachers’ 2000 irony free, artillery blast release.

26. “There Stands the Glass,” Webb Pierce. Songwriters: Russ Hull, Mary Jean Shurtz and Audrey Greisham; #1 country; 1953. Webb Pierce’s greatest commercial achievement came in 1955 when his cover of “In the Jailhouse Now” spent twenty-one (yes, twenty-one) weeks at #1 on the country charts in 1955. His most significant artistic achievement was “There Stands the Glass,” which ranks with the very best of country music drinking songs. Webb sings about alcohol as pain medication, as liquid bravery, as a method to try to forget that which cannot be forgotten. Author Dana Jennings, “’There Stands the Glass’ opens with a slurred steel guitar played by Jimmy Day that is as warped and fuzzy as being drunk itself. Then Pierce’s pained tenor, ‘There stands the glass that will ease all my pain,’ sung with a fatalism that actually means, ‘There stands my tombstone.’”

25. “Blue Monday,” Fats Domino. Songwriter: Dave Bartholomew; #5 pop/#1 R&B; 1956. “Blue Monday” was first recorded by Smiley Lewis in 1953, but his account of the workweek blues failed to chart. By 1956, Domino had perfected his New Orleans rock ‘n’ roll sound, combining a strong rhythm section with swaying saxophone notes and his warm, comforting vocal style. Rolling Stone, “Domino’s version remains faithful to the original, though his charming delivery makes the R&B cut feel even more youthful and celebratory, especially as he hits the song’s end where the protagonist leaves the work week behind to go ‘out on the stand to play.’ According to Domino’s biographer Rick Coleman, ‘Blue Monday’ was the singer’s favorite song.”

24. “Who Do You Love?,” Bo Diddley. Songwriter: Elias McDaniel; Did Not Chart; 1956. Bo Diddley, eschewing his famous beat, sounds more like Chuck Berry than Muddy Waters on the simultaneously dark and hysterical “Who Do You Love?” Diddley kicks off the song with one of the rock ‘n’ roll’s most memorable moments of braggadocio, proclaiming, “I walk 47 miles of barbwire/I wear a cobra snake for a necktie.” He sounds somewhat like a sly, dark alley predator making a demand for his affection and it may be a clever accident or genius that “Who Do” is a homonym for “hoodoo,” considering Diddley’s “tombstone hand” and “rattlesnake whip.” Diddley, on his theme, “I’m telling this chick how bad I am, so she can go tell the cat she’s hanging with, ‘this dude is something else.’ That’s what it kinda meant, cat ridin’ rattlesnakes and kissin’ boa constrictors and stuff.” From the altrockchick website on the song’s lack of commercial success, “While the culture had reluctantly expanded to tolerate rock ‘n’ roll, most songs by those classified as rock artists were rather tame concerning the major topic of interest of the targeted teenage audience: how to attract members of the opposite sex. While you can imagine a teenage boy crooning ‘Love Me Tender’ to his adoring sweetheart as they floated down the tunnel of love, he wouldn’t have had the slightest idea what to do with Bo Diddley’s hyperbolic display of machismo.”

23. “Jailhouse Rock,” Elvis Presley. Songwriters: Jerry Lieber, Mike Stoller; #1 pop/#3 country/#1 R&B; 1957. After the success of “Hound Dog,” Jerry Leiber and Mike Stoller wrote several songs for Elvis, none more popular than “Jailhouse Rock.” Elvis had become such a major pop star in 1956 that he was rushed into the movie industry, first placed in a supporting role in “Love Me Tender” in 1956 and then starring in 1957’s “Loving You.” “Jailhouse Rock” was written to order for the movie of the same name and Elvis once again was simultaneously on the country, R&B, and pop charts. The composition was the perfect mixture of rock and Hollywood, resulting in one of the most memorable dance scenes in film history. Lieber, “We would get a script marked off were they wanted some type of song, like Scene II, Elvis is with so-and-so and needs a love song. The long songs were a great problem, because I really can’t write love songs. But that was the least of it. I certainly would never have written ‘Jailhouse Rock,’ for example, if somebody hadn’t said, ‘Look, there’s going to be a big production number in a jail.’” Always a bit subversive, the famed writing duo included a playful reference to gay prison sex in the lyrics. Lieber and Stoller’s relationship with Elvis ended when Colonel Parker sent the songwriters a blank contract. When the duo pointed out that they had only received a blank sheet of paper with two spots for signature, Colonel Parker helpfully noted that he would complete the rest of the document after it was signed.

22. “Long Tall Sally,” Little Richard. Songwriters: Robert “Bumps” Blackwell, Enotris Johnson, Little Richard; #13 pop/#1 R&B; 1956. “Long Tall Sally” is another one of Little Richard’s howling celebrations of promiscuity. The record had a particularly strong impact on English teenager John Lennon, who later remembered, “When I heard it, it was so great I couldn’t speak. You know how you’re torn? I didn’t want to leave Elvis. Elvis was bigger than religion in my life. We all looked at each other, but I didn’t want to say anything against Elvis, not even in my mind. How could they be happening in my life, BOTH of them?” Paul McCartney was similarly impressed and performed the song at his first meeting with John Lennon. Rock critic Dave Marsh, “’Long Tall Sally’ is piano music, but the instrumental break is dominated by Lee Allen’s sax and Earl Palmer’s drums playing an apotheosis of the New Orleans shuffle. Richard gives a singularly stentorian, almost hoarse, shouting vocal, a little ragged but exactly right. ‘Long Tall Sally’ is one of the documents that established the art of rock ‘n’ roll.”

21. “Back in the U.S.A.,” Chuck Berry. Songwriter: Chuck Berry; #37 pop/#16 R&B; 1959. Supposedly written after touring Australia, Chuck’s version of exalted Americana is replete with drive-ins, sizzling hamburgers, and jumping jukeboxes. Background singers on this 1959 #37 pop hit included Etta James and Marvin Gaye, then a member of The Marquees. This tale of national pride was a bigger hit for Linda Ronstadt in 1978 and Paul McCartney repurposed the title for “Back in the U.S.S.R.” Best cover – The MC5 kicking out the jam.