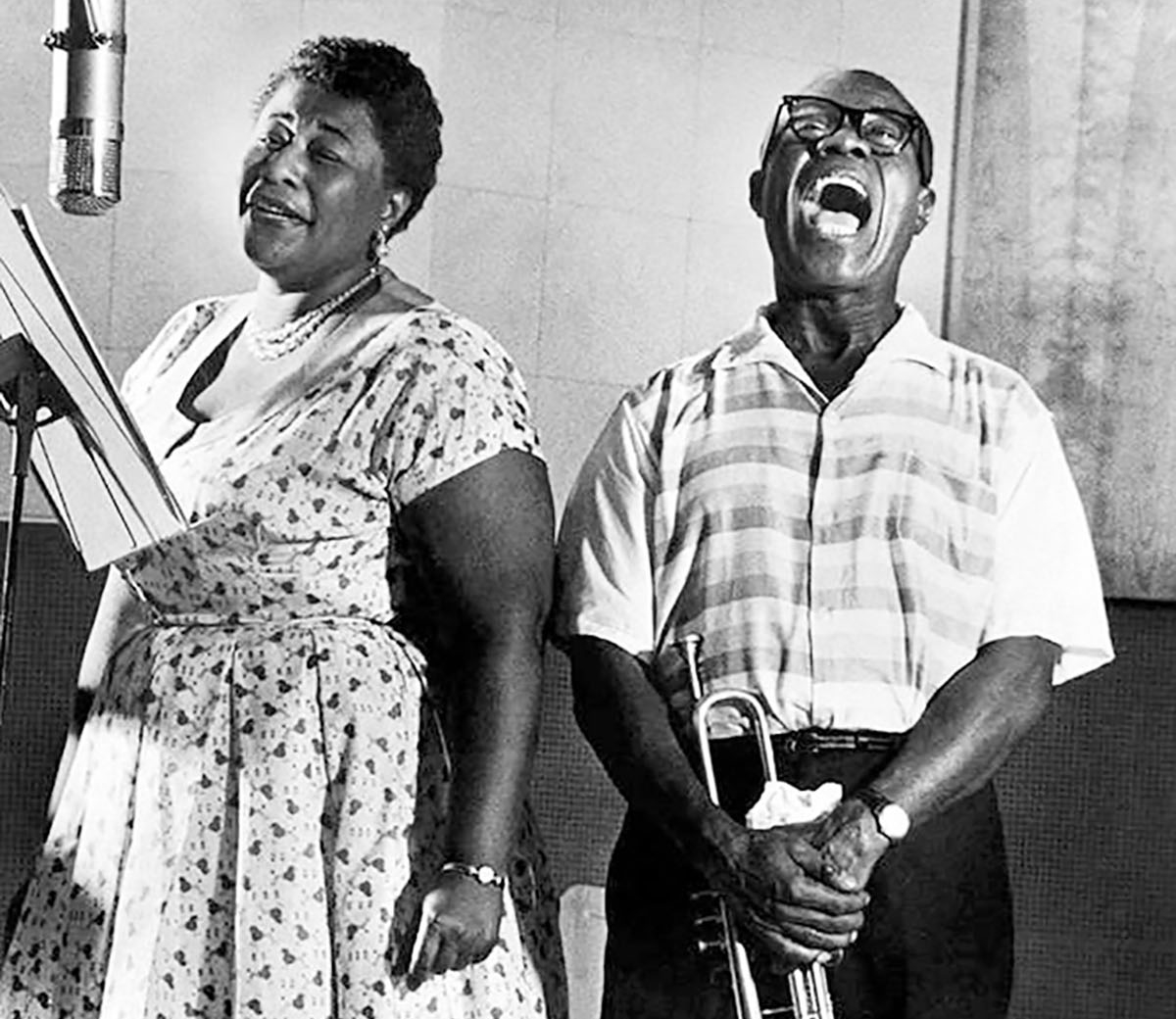 “In llama-land there’s a one-man band and he’ll toot his flute for you.”

290. “Dream a Little Dream of Me,” Louis Armstrong and Ella Fitzgerald; Did Not Chart; 1950. “Dream a Little Dream of Me” was first released by Ozzie Nelson in 1931 and was a #1 hit for Wayne King and His Orchestra during that year. This pop standard was an international hit for Mama Cass of The Mamas and the Papas during the late 1960s, but, prior to that era, seven versions of the song were released in 1950, to include covers by Dinah Shore, Bing Crosby, Frankie Laine, and this duet by Louis Armstrong and Ella Fitzgerald. Both artists play to their strengths, with Ella’s graceful vocals and scatting contrasting with Armstrong’s gravelly voice and speaking trumpet. This is two jazz legends taking a leisurely and enjoyable stroll.

289. “Soft,” Tiny Bradshaw. Songwriter: Tiny Bradshaw; #3 R&B; 1953. Although Tiny Bradshow received the billing, the 1953 instrumental “Soft” is a showcase for tenor saxophone player Red Prysock. Prysock is often described as a disciple of Coleman Hawkins and he clearly brings a jazz sensibility into the world of R&B on “Soft,” a song that sounds like bebop for lounge sophisticates. Red was the brother of R&B balladeer Arthur Prysock who released nine Top 40 R&B singles between 1946 and (this is not a type) 1977. Musician Danny Moore remembering the Prysock duo from their time in Harlem during the late 1950s, “They were tall and handsome. Even the women whistled at them when they walked down the street. Used to drive them gals crazy. They were some well dressed brothers.”

288. “(Now and Then There’s) A Fool Such As I,” Elvis Presley. Songwriter: Bill Trader: #2 pop/#16 R&B; 1959. Songwriter Bill Trader is an enigma. Either from North or South Carolina, he could neither read nor write music. His primary job was vending machine maintenance and he paid a friend to write lead sheets for his composition. It is not known how “(Now and Then There’s) A Fool Such As I” made it to Hank Snow; it was the only hit that Trader ever wrote. Snow’s version reached #4 on the county charts in early 1953. Elvis, familiar with the song from his time working as Snow’s opener during the mid-1950s, recorded a doo wop meets rockabilly cover while on leave from the Army in 1958. Bass vocalist Ray Walker had joined the Jordonaires less than two weeks before this session and is featured prominently on the record. Walker on The King, “There was just an aura about him – you knew he was around – and he was one of the most impressive people I have ever met in my life. He knew exactly what he wanted.”

287. “Pledging My Love,” Johnny Ace with The Johnny Otis Orchestra. Songwriters: Fats Washington, Don Robey; #17 pop/#1 R&B; 1955. Johnny Ace released five Top Ten R&B singles from 1952 to 1954 and was postured for bigger success. Unfortunately, on Christmas day of 1954 at a show in Houston, Ace was either (a) playing with a gun and accidentally shot himself in the face or (b) committed suicide via Russian roulette. “Pledging My Love,” a slow dance love song featuring Johnny Otis playing the vibraphone, became a posthumous crossover pop success for Ace. Author Mark Carnes, “For the first time in the postwar era, white record buyers (primarily teens) chose this ballad by a solo black male singer signed to an independent rhythm and blues label as the unique and definitive performance of a popular song against which all subsequent performances were ruthlessly judged. Johnny Ace died a rhythm and blues star and was resurrected as a rock and roll legend. He’s been called rock’s first ‘casualty,’ ‘the first fallen angel, and ‘the colored James Dean.’”

286. “Trouble in Mind,” Dinah Washington. Songwriter: Richard M. Jones; #4 R&B; 1952. Dinah Washington (nee Rose Lee Jones) was one of the top R&B singers of the 1940s and 1950s in terms of commercial success, although she often cultivated a reserved, adult contemporary sound. She had the first chart hit with “Trouble in Mind,” a blues standard that has been recorded by hundreds of artists since its original release in 1924. Ben Webster contributes the saxophone solo on the record and occasionally the record is credited to both Washington and Weber. Author Frank Buchmann-Mailer, “Weber plays but one eight-bar solo on the slow ‘Trouble in Mind,’ but it is extremely eloquent, utilizing glissandi and dynamics superbly to express soulful emotion.” Quincy Jones commenting on Washington’s vocal skills, “She could take the melody in her hand, hold it like an egg, crack it open, fry it, let it sizzle, reconstruct it, put the egg back in the box and back in the refrigerator and you would’ve still understood every syllable.”

285. “Mary Don’t You Weep,” The Swan Silvertones. Songwriter: Traditional; Did Not Chart; 1959. The Swan Silvertones, a gospel quartet, formed in West Virginia in 1938 and recorded for Cincinnati’s King Records from 1946 to 1951. They moved to Vee-Jay Records in 1955 and released their two best known songs later in 1959 – the virginal mother encouragement “Mary, Don’t You Weep” and the upbeat soul shouter/Jesus number “Trouble in My Way.” Author Jerry Zolten, “’Oh Mary Don’t You Weep’ is one of the ethereal African American spirituals – a freedom song – born in the anonymity of slavery and drifted across time to bubble up as the need arose. The Silvertones delivered a tour de force performance recorded live in the studios of radio station WENW in Bessemer, Alabama. In his singular arrangement, singer Claude Jeter deconstructed the traditional ‘Oh Mary Don’t You Weep’ and reassembled it as nothing less than a battle cry for freedom.” Paul Simon has credited a lyric from this song as the inspiration for “Bridge Over Troubled Water” and he certainly revisited the rhythm for “Loves Me Like a Rock.”

284. “Down in Mexico,” The Coasters. Songwriters: Jerry Lieber, Mike Stoller; #8 R&B; 1956. “Down in Mexico,” a tale of international intrigue and dirty dancing, replete with a bongo interlude during the bridge, was the first single released by The Coasters. Mike Stoller, “It has a slight Latin tinge that’s reminiscent of the Chicano milieu I had encountered in high school in L.A. But the blues is all over it.” From the “Don’t Forget the Songs” website, “This Coasters cut is one of the grooviest Mexico adventures ever documented on wax. Those sax lines are so caliente, matching the lyrical intensity and clever wordplay that Jerry Lieber imagined in those seedy bars.”

283. “Endless Sleep,” Jody Reynolds. Songwriter: Jody Reynolds; #5 pop/#5 R&B; 1958. Rockabilly Hall of Fame member Jody Reynolds grew up as a Western swing fan in Oklahoma, but after moving to Texas in the mid-1950s, he found his calling in rock ‘n’ roll. Reynolds was on the leading edge of the teen tragedy movement with “Endless Sleep,” where the narrator fears that his lover has drown due to throwing herself into the ocean after a romantic quarrel. The label influenced Reynolds to change the ending where he would be the rescuer, feeling that his original song was too dark for airplay. Reynolds never replicated the success of “Endless Sleep,” but his 1958 single “Fire of Love” was covered by the MC5 and the Gun Club.

282. “Come Fly with Me,” Frank Sinatra. Songwriters: Jimmy Van Hausen, Sammy Cahn; Did Not Chart; 1958. Sammy Cahn on this brassy, big band number that became a Sinatra standard, “Sinatra was about to do an album and he had the notion of doing a song about taking a flying trip. (Songwriter) Jimmy Van Heusen and I just sat there for a while and kicked some titles around. Finally, we both agreed on ‘Come Fly with Me’ as the most evocative, especially when sung by Frank Sinatra.” Charles Pignone, Vice President of Frank Sinatra Enterprises, on the song’s good timing, ‘I think ‘Come Fly with Me’ epitomized that decade and the good life and having a good time. America was just picking up the pieces from World War II, and the decade before that they were in a war, and things were changing in America.”

281. “I’ll Be There (If You Ever Want Me),” Ray Price. Songwriters: Rusty Gabbard, Ray Price; #2 country; 1954. Before becoming a major star, Ray Price befriended two of country music’s most important performers. He worked with Lefty Frizzell in Texas, then became friends/roommates with Hank Williams after moving to Nashville. Hank even wrote “Weary Blues” for Ray, in an effort to jump start his career, but the record wasn’t a success. After Hank’s death, Price went on to lead Hank’s former band, the Drifting Cowboys, for a short time. Hank’s influence is pronounced on “I’ll Be There (If You Ever Want Me),” a #2 hit that Ray wrote with singer Rusty Gabbard. This quest for love has been covered by Eric Clapton, George Jones & Tammy Wynette, Leon Russell, and was a Top Ten country hit for Gail Davies in 1981.