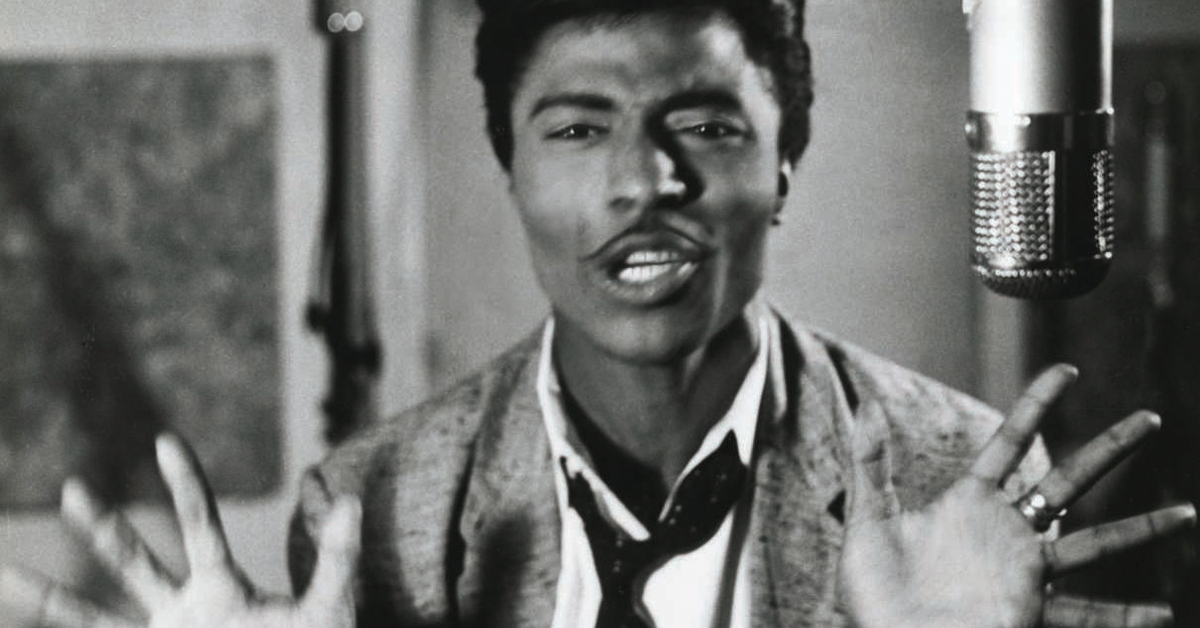 I’ve been traveling night and day, running all the way, baby, trying to get to you.

210. “Rip It Up,” Little Richard. Songwriters: Robert Blackwell, John Marascalco; #17 pop/#1 R&B; 1956. Rocking, ripping, shaking, and balling were all important skills in the Little Richard arsenal. Yet, the great soul screamer is relatively calm, by his standards, on the Saturday night party record “Rip It Up.” Give credit to drummer Earl Palmer and saxophone players Lee Allen and Alvin “Red” Tyler for incorporating elements of New Orleans and jump blues into the equation. Jerry Allson of The Crickets on his biggest influence, “The early Elvis records didn’t have drumming on them. I was listening to Little Richard’s drummer, Earl Palmer. ‘Lucille,’ ‘Rip It Up,’ and ‘Ready Teddy’ are all great and he was playing rock ‘n’ roll like I’d never heard before.”

209. “Rebel Rouser,” Duane Eddy. Songwriters: Duane Eddy, Lee Hazelwood; #6 pop/#8 R&B; 1958. The instrumental “Rebel Rouser” sounds like an echo drenched guitar re-write of “When the Saints Come Marching In,” although Duane Eddy denied that song was his inspiration. Future Nancy Sinatra collaborator Lee Hazelwood produced the track and the future R&B novelty act The Rimingtons (“Papa-Oom-Mow-Mow,” “The Bird’s the Word”) provided backing handclaps. Eddy, “We were recording in Phoenix, starting my first album, and one of the guys said, ‘Man, that guitar sounds twangy.; And (Hazlewood’s business partner) Lester Sill fell down laughing. He’d never heard that word and it became a running joke. ‘Is that twangy enough?’ So we finished the album and called it ‘Have Twangy Guitar Will Travel.’ To be honest I never really liked the word. I thought it was kind of corny and rather undignified, but at the same time so many people liked it I just shut up and went with it.”

208. “One Hand Loose,” Charlie Feathers with Jody and Jerry. Songwriters: Charlie Feathers, Jerry Huffman, Jody Chastain; Did Not Chart; 1956. Charlie Feathers was a Mississippi born, Memphis based eccentric rockabilly stylist, who co-wrote the 1955 Elvis record “I Forgot to Remember to Forget” and took credit for many of the early achievements of Elvis and Sam Phillips. Phillips, thinking that Feathers had a voice more suited to honky tonk heartbreak than rock ‘n roll, wouldn’t release any of Feathers’ music on Sun, so he went to smaller Memphis labels to pursue his vision. Feathers demands his freedom to rock on the vocal hiccupping “One Hand Loose.” After you hear it, you won’t be surprised that it was covered by The Stray Cats in 1986. Feathers never found fame and performed in small Memphis area clubs for decades, bemoaning the death of his beloved rockabilly. Memphian/author Robert Gordon, “Charlie Feathers vocals are sculptures.”

206. “The ABCs of Love,” Frankie Lymon and the Teenagers. Songwriters: George Goldner, Richard Barrett; #77 pop/#8 R&B; 1956. Frankie Lymon takes his love interest through the alphabet on this whooping doo wop outing. Rock critic Bruce Eder, “The bold, strutting ‘ABC’s of Love,’ hit a different target (than the group’s ballads). Lymon’s exuberant vocal, promising a mix of innocence in tone and forbidden knowledge in content, alternating in focus with Jimmy Wright’s piercing sax break – which implicitly represented the forbidden side of the ABC’s – amid a pounding beat.” George Clinton, “Frankie Lymon was Michael Jackson fifteen years before the real Michael Jackson, a wrinkle in time, a little kid with a voice and stage presence no one could forget.”

205. “Hippy Hippy Shake,” Chan Romero. Songwriter: Chan Romero; Did Not Chart; 1959. Rocker Robert Lee “Chan” Romero emerged from Montana, where his parents performed migrant farm work, and was signed by former Ritchie Valens manager Bob Keane. Romero penned the rock classic “Hippy Hippy Shake” at the age of seventeen and the opening line was inspired by the 1957 film “Bridge Over the River Kwai.” Romero in 2014, “There was that real cute little Oriental girl and she’d get excited and say, ‘For goodness sake!’ I was thinking of that one day and just started writing.” Romero’s original wasn’t a U.S. hit, but went to #3 on the Australian charts. The Beatles performed the song in the early 1960s, giving Paul McCartney an opportunity to do his Little Richard imitation, and the song was an international hit for The Swinging Blue Jeans in 1963. In late 2018, a state legislator proposed making “Hippy Hippy Shake” “Montana’s official rock ‘n’ roll song.” The proposed bill began with, “WHEREAS, Montanans shake it to the left and shake it to the right and do everything with all of their might.”

204. “Evil (Is Going On),” Howlin’ Wolf. Songwriter: Willie Dixon; Did Not Chart; 1954. This 1954 b-side is the trippiest Chicago blues record of its era. You’ve got stop/start rhythms, Otis Spann playing piano like he’s wandered into a jazz club during the verses, Wolf growling about “another mule kicking in your stall” when he’s not blowing on his harmonica, a slow/loping drum pattern from Earl Phillips, and wandering guitar licks throughout. Wolf biographers James Segrest and Mark Hoffman, “In an unusual vocal, Wolf shouted out the first lines of each verse in a constricted voice and then sang the last lines in a different voice. The result was a call-and-response pattern between the singer and himself. The song was about infidelity on the home front, something Wolf worried about incessantly.”

203. “I’m a Lover, Not a Fighter,” Lazy Lester. Songwriter: J.D. Miller; Did Not Chart; 1958. Leslie Johnson (a.k.a. Lazy Lester) was a Louisiana bluesman who was hired to do studio work by J.D. Miller after accompanying Lightnin’ Slim to a recording session. Miller made tough rockabilly meets R&B records with Lester during the late 1950s including “I Hear You Knockin’” (later covered by The Fabulous Thunderbirds), “Sugar Coated Love” (resurrected by Barbara Lynn, Freddy Fender, and Lou Ann Barton), and the built for speed “I’m a Lover, Not a Fighter,” which The Kinks brought back to America during the British Invasion. Lester primary instrument was the harmonica and he gets a nice solo turn during the instrumental break. Despite having no commercial success, Lester did a Geico ad in 2018, giving him a national spotlight shortly before he passed away.

202. “Early Every Morning,” B.B. King and His Orchestra. Songwriters: B.B. King, Sam Ling; Did Not Chart; 1957. B.B. King kicks out the jams on this 1957 rocker that’s been alternately titled “Early Every Morning” and “Early in the Morning,” while wiping away notions of personal blues on this number, declaring “Have fun whiles you can, fate’s an awful thing.” King, “Louis Jordan proved you could take the blues in a dozen different directions and keep ‘em blue.” One can only imagine that Jordan would have loved this modernization of his jump blues sound.

201. “Trying to Get to You,” Elvis Presley. Songwriters: Rose Marie McCoy, Charles Singleton; #55 pop; 1956. A few decades before Don Henley and Glenn Frey moved to Los Angeles, there was a Washington, D.C. based R&B band name The Eagles and that unit released the original version of “Tryin’ to Get to You” in 1954. The tale of separated lovers wasn’t a national hit, but caught the ear of Elvis, who recorded it at Sun Records in 1955 and it became a minor charting b-side when released by MCA in 1956. Author John Beifuss, “In comparison to some of Elvis’ raw or ‘hillbilly’ Sun recordings, ‘Trying to Get to You’ sounds unusually sophisticated — so much so that it was among the Sun releases included on his debut RCA album in 1956, alongside songs cut in Nashville and New York with A-list session aces. Like some sort of sidekick or wingman, Scotty Moore’s chatty guitar reinforces each of Elvis’ lines, as if to reassure the listener of the singer’s sincerity — not that any additional affirmation is needed when Elvis’ vocals are this assured and resourceful.”