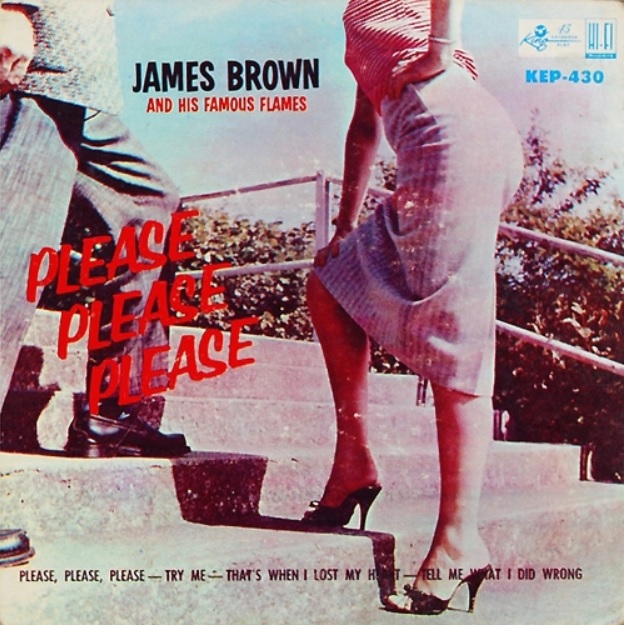 I took my troubles down to Madame Ruth/You know that gypsy with the gold-capped tooth.

170. “Pretty Thing,” Bo Diddley. Songwriter: Willie Dixon; #4 R&B; 1956. “Pretty Thing” is Bo Diddley at his most elemental – the driving, relentless beat, harmonica fills provided by Lester “Mad Dog” Davenport, Jerome Green on maracas, and Bo sprinkling in some rhythm guitar work. Rock critic Bill Janovitz, “As with the Chess recordings of colleague Chuck Berry, ‘Pretty Thing’ is one of the early links between Mississippi Delta-via-Chicago electric blues and rock & roll, the rhythm being king.” The song would make a major mark on British rock bands of the next decade, being covered, rather humorously, by The Animals in 1963 and providing the name for the London act The Pretty Things.

169. “Please, Please, Please,” James Brown with the Famous Flames. Songwriters: James Brown, Johnny Terry; #5 R&B; 1956. “Please, Please, Please” was the first R&B Top Ten hit for James Brown, a song that author RJ Smith traced back to Big Joe Williams’ 1935 version of “Baby, Please Don’t Go,” and a 1951 rewrite of that song by Billy Wright titled “Turn Your Lamps Down Low.” Smith, “’Please, Please, Please’ was a straight-up slow burner that sounded old before anybody heard it, built from parts going back decades and animated by a working band trying to win a crowd, earn another night, get further along the road. A very old cage…a strange, new bird.” Starting in the late 1950s, Brown feigned exhaustion while singing “Please, Please, Please,” was assisted off stage, and then miraculously returned for more untempered begging. Howlin’ Wolf, perhaps not amused by Brown’s antics, once warned him to stop crawling around and looking up women’s dresses while singing this song.

168. “Hallelujah I Love Her So,” Ray Charles. Songwriter: Ray Charles; #5 R&B; 1956. Ray Charles mixed the sound of gospel with big band jazz for his sweetheart appreciation number “Hallelujah I Love Her So.” (This merger of sounds may be because the song was a rewrite of the Dorothy Love Coates spiritual number “Hallelujah, I Love Him So,” which is impossible to find, even in the internet era). This was one of Brother Ray’s fifteen Top Ten R&B hits he had from 1953 to 1957, before he ever crossed over to the pop charts. Ahmet Ertegun on the recording sessions of this era, “Ray developed an uncanny feel for structuring a song to grab an audience.”

167. “Blow Wind Blow,” Muddy Waters and his Guitar. Songwriter: Muddy Waters; Did Not Chart; 1953. Muddy Waters tries to make good use of the natural energy from the Windy City, requesting that bracing air to blow his cheating woman back to him. One advantage Waters had over his competitors is that his band rocked harder and better than anybody else in the business during his era. Eric Clapton, “For me, it takes a great deal of study and discipline to sing the blues. Muddy’s songs have been the hardest. When I’ve approached Muddy’s repertoire, I’ve always gone for the less well-known songs. I’ve done ‘Blow, Wind, Blow’ and I’ve done ‘Standing Around Crying.’ His music means more to me than anybody else’s.”

166. “Cry Me a River,” Julie London. Songwriter: Arthur Hamilton; #9 pop; 1955. California native Julie London had a long career in movies, television, and music. Record producer Simon Waronker discovered her at a Los Angeles jazz club and later remarked, “The lyrics poured out of her like a hurt bird.” That quality is at the forefront of “Cry Me a River,” a jazz inspired torch song made more dramatic by the stark instrumentation. Songwriter Arthur Hamilton on the title, “I had never heard the phrase. I just liked the combination of words… Instead of ‘Eat your heart out’ or ‘I’ll get even with you,’ it sounded like a good, smart retort to somebody who had hurt your feelings or broken your heart.” London sounds impossibly broken on “Cry Me a River,” as though she has survived a broken heart but will never know true happiness again. London biographer Michael Owen on the song’s success, “Julie’s subtle, erotically caressing voice and the minimalist production values were a sharp contrast to the pedestrian, overproduced pop sides (of its era).”

165. “At the Hop,” Danny and the Juniors. Songwriters: Artie Singer, John Medora, David White; #1 pop/#1 R&B; 1958. Dick Clark was instrumental in making “At the Hop” a hit, recommending that the title be change from “Do the Bop” and securing half of the publishing on the song in order to push it on “American Bandstand.” Songwriter John Madera, on the original “Do the Bop” single, “I wanted to do something that had a piano featured like ‘Whole Lotta Shakin’ Goin’ On.’ So, off we go to the recording studio, with me singing lead, Danny and The Juniors singing background, and my 45 record ‘A Whole Lotta Shakin’ Goin’ On’ to set the tone of what I was shooting for.” Coincidentally, on the date that “At the Hop” topped the pop charts, “Great Balls of Fire” was at #2. John Medora and David White stayed together as a songwriter partnership, penning Chubby Checker’s “The Fly,” Lesley Gore’s incomparable “You Don’t Own Me,” and Len Barry’s “1-2-3.”

164. “Love Potion No. 9,” The Clovers. Songwriters: Jerry Lieber, Mike Stoller; #23 pop/#23 R&B; 1959. The Clovers ruled the R&B charts during the early 1950s, but faded from that scene after 1956. “Love Potion No. 9,” a tale of buying a liquid aphrodisiac from a gypsy and quickly degenerating into hysteria, was the Clovers biggest crossover pop hit and their final charting single. After the psychedelic era hit pop music, Jerry Leiber defensively noted, “’Love Potion No. 9’ does not represent a disguised advocacy for other kinds of drugs in the pre-hippie era.” Mike Stoller on the numerical choice, “We always loved the word ‘nine’ because it resonates in song. Remember ‘Riot in Cell Block #9’? When my doctor holds a stethoscope to my back, he always asks me to say ‘nine.’ Nine’s a lucky number.” “Love Potion” was one of the last successful comedic, story songs by Leiber and Stoller. The Coasters scored one more hit in that style with 1961’s “Little Egypt (Ying-Yang).”

163. “Louisiana,” Percy Mayfield. Songwriter: Percy Mayfield; Did Not Chart; 1952. Percy Mayfield was best known for his R&B ballads, but he skillfully used a jazz influenced rhumba beat on “Louisiana,” a song about returning to one’s roots. Ray Charles, who would record many of Mayfield’s compositions and sign him to a record deal, once noted that Mayfield “wrote songs that were ahead of their time.” That certainly appears to the case with “Louisiana,” which sounds like it could have been a hit in the rock ‘n’ roll era. Mayfield’s successful solo career was cut short by a major car accident in 1952 that he barely survived and left his face permanently disfigured. Tina Mayfield, his widow, in 1997, “He would try to leave something with the people that they wouldn’t forget, to relieve the pain. Because he had gone through a lot of pain, and a lot of agony in his day. He had quite a few unhappy days. His whole life was full of pain and misery.”

162. “Talk to Me, Talk to Me,” Little Willie John. Songwriter: Joe Seneca; #20 pop/#5 R&B; 1958. Detroit product Little Willie John was known both for powerful voice and his propensity for the dark side of life. The ballad “Talk to Me, Talk to Me” was John’s biggest pop crossover hit of the 1950s, charting four spots higher than 1956’s “Fever.” From the Rock and Roll Hall of Fame website, “His muscular, full-throated tenor belied his short stature. His impassioned, gospel-style vocals were a precursor to the soul music that emerged in black music in the late Fifties and beyond. Indeed, John’s fervent vocals on such songs as ‘Need Your Love So Bad,’ ‘Talk to Me, Talk to Me,’ ‘All Around the World’ and ‘Take My Love (I Want to Give It All to You)’—each a Top Five R&B hit—rank among the best examples of soul singing on record.” Boz Scaggs, “He’s one of the four or five most important writers and singers and stylists, in my book. He was right up with Ray (Charles), Sam Cooke, he’s up there.”

161. “Blue Moon,” Elvis Presley. Songwriters: Richard Rodgers, Lorenz Hart; #55 pop; 1955. Author Chris Herrington on this phenomenally strange version of the Rodgers/Hart classic, “Filmmaker Jim Jarmusch named his Memphis movie ‘Mystery Train,’ but it was this Sun recording he used as a connecting thread among the film’s four portraits of lost souls on one Memphis night. Elvis’ singing is the most ethereal of his career and, though it’s a ballad, a standard even, maybe the wildest. He sings like a spirit. Here’s the ghost of Elvis, more than 20 years before his actual death. It may be the oddest – in a good way – recording in the Elvis canon. Rather than timeless, it sounds out of time.”