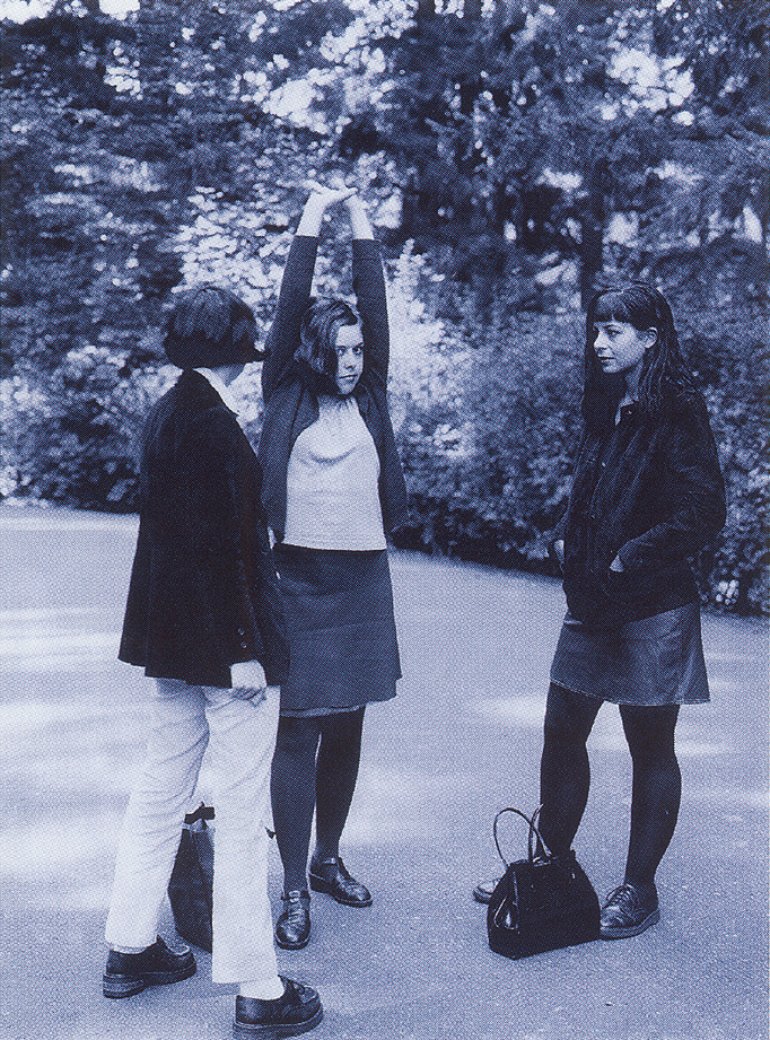 410. “Wanna Rock and Roll,” Ray Wylie Hubbard. Songwriter: Ray Wylie Hubbard; Did Not Chart; 1994. Ray Wylie Hubbard didn’t completely right himself artistically until the 2000s, but “Wanna Rock and Roll” is the type of sweaty, funky blues rock that would become his stock in trade. Hubbard recorded this double murder rocker twice in the 1990s, but you want the version from his 1994 “Loco Gringos Lament” album. Hubbard, singing about the object of his affection and jealousy, “The woman’s got a walk to make a man cry/Throw back his head and howl/Ruby red lips, liquid hips/More than the law will allow.” And those power chords in the chorus are absolutely nasty, in the best possible way. “Wanna Rock and Roll” was covered by Oklahoma based, red dirt act Cross Canadian Ragweed in 2004.

409. “Stakes is High,” De La Soul. Songwriters: K. Mercer, D. Jolicoeur, V. Mason, J. Yancey, A. Jamal, L. R. Lynn; Did Not Chart; 1996. I think it’s fair to say that De La Soul weren’t enamored with the state of hip hop culture in 1996: “I’m sick of bitches shakin’ asses/I’m sick of talkin’ about blunts/ Sick of Versace glasses/ Sick of slang/ Sick of half-ass awards shows/Sick of name brand clothes.” Andrew Friedman of Fact Mag, “’Stakes is High’ is about the juncture of art and commerce and the downside to the growth of hip-hop as a business. The problem isn’t just that Nas reinvented himself as a coke kingpin, it’s that he did it as a marketing strategy rather than a creative decision. All debates about the pros and cons of cinematic, but mostly fraudulent, crime rap aside, more money meant more pressure on artists to think about commercial viability, and less impetus to talk about the relatable day-to-day shit which gave the genre its heart in the first place. There’s a damn good reason why, in the video for ‘Stakes Is High,’ De La Soul are doing normal shit like dishes, laundry and yard work.”

408. “Money in the Bank,” John Anderson. Songwriters Mark D. Sanders, Bob DiPero, John Jarrad; #1 country 1993. The trio of songwriters who penned the comedic country rocker “Money in the Bank” have their names on forty #1 country singles. Mark Sanders, the product of a “prototypical, dysfunctional alcoholic” family in Los Angeles, was a school teacher before moving to Nashville. His first songs were about his personal demons, “Every time I would write about my dad, I would kill him. There was something psychological there.” However, Bob DiPero loosened him up, “There’s a fine line between ‘just stupid’ and $100,000. That’s what we called ‘the DiPiero line.’ We wrote a whole slew of songs like that. It was simple stuff. Bob basically taught me how to be a hillbilly.” John Anderson had his fifth, and last, #1 hit with this droll love over lucre outing.

407. “Single Girl,” Lush. Songwriter: Emma Anderson; Did Not Chart; 1996. “Single Girl,” with its driving rhythm, cooing background vocals, and smart use of power chords and tempo changes, was the biggest hit in the U.K. for the London band Lush, along with 1996 single “500 (Shake Baby Shake).” This song about the pitfalls and possibilities of romance was described by journalist Franki Valish as a “jubilant slice of driving melodic guitar pop that could have easily bested any Oasis or Blur single to date.” Rock critic Megan Frampton on the “Lushlife” album, “(Singers) Mike Berenyi and Emma Anderson have clearly been burned by (and burned out on) love. The lyrics concentrate on that topic almost exclusively. ‘Ladykillers’ and ‘Single Girl’ both share the naïve cynicism of world-weary twenty-somethings, taking every nuance as seriously as a punch in the eye.”

406. “Tubthumping,” Chumbawamba. Songwriters: Chumbawamba; #6 pop; 1997. Chumbawamba wasn’t a band you would have expected a major international hit from in 1997, the group formed in 1982 and used their music to express their leftist political views. “Tubthumbing” suffers from being repetitive, but includes one of the most anthemic choruses in the history of pop music, one about having an indomitable spirit. Guitarist Boff Whaley, “When Chumbawamba started in 1982 we were all squatting in a big, empty house, doing part-time jobs and sharing our money. We were an anarchist collective, influenced by the Sex Pistols and the Clash, but right from the start we wanted to sing harmonies and have singalong choruses. Tubthumping was written as a collective – like everything else. We wanted to make a very English album and the song is about the resilience of ordinary people.” Vocalist Dunstan Bruce, “The song is about us – as a class and as a band. The beauty of it was we had no idea how big it would be.”

405. “4st 7lb,” Manic Street Preachers. Songwriters: Richey Edwards; Did Not Chart; 1994. “4st 7lb” is an emotional rollercoaster of a song about anorexia that starts with razor sharp chords and ends with a bad dream aura. Author Andy Johnson, “Nothing else sounds quite like ‘4st 7lb.’ Even in the context of an album (‘The Holy Bible’) on which each track is a significantly different, dark riff on the post-punk formula, this song is one of the most unique Manics efforts of its era. Bradfield’s superb guitars create much of the bleak but perversely exciting atmosphere, and Moore’s drums are constantly shifting and seldom sticking to one pattern for any length of time. The fairly protracted slow, hazy section at the end of the song is perhaps its masterstroke, build around Bradfield’s “underwater” guitar work and creating a sense of life slowly slipping away.” Party on, Garth. Party on, Wayne.

404. “Motownphilly,” Boyz II Men. Songwriters: Dallas Austin, Michael Bivins, Nathan Morris, Shawn Stockman; #3 pop/#4 R&B; 1991. The vocal group Boyz II Men originated in a Philadelphia high school in 1985 and eventually took their name from a New Edition album track. They scooped up most of their gravy during the decade from ballads (“I’ll Make Love to You,” “End of the Road,” “On Bended Knee”), but first hit the airwaves with the Bell Biv Devoe inspired new jack swing of “Motownphilly.” Their music mixed traditional and contemporary sounds, calling their package “doo wop meets hip hop,” and had a squeaky clean, non-threatening image in the Motown tradition. Writer Adam Blyweiss, “This is a hard-charging template for new jack swing, one full of barbershop harmonies and spoken-word breakdowns, that at last makes the oft-ignored connection between the front half and the back half of the song’s title—Detroit’s long R&B legacy merged with the skill hiding in the home of Gamble & Huff.”

403. “Gin and Juice,” Snoop Doggy Dog (featuring Daz Dillinger and David Ruffin Jr.). Songwriter: Calvin Broadus; #8 pop/#13 R&B; 1994. “Gin and Juice” matched an ominously seductive G-funk groove with a Snoop Dogg rap about sex, weed, and liquor. You can almost visualize attentive strippers through a smoky haze while hearing it. Rock critic Jonathan Hatchman, “On top of one of hip-hop’s most recognizable hooks – a loose interpolation of Slave’s ‘Watching You’ – Snoop’s lyrics tackled a number of social issues, among them street gangs, something of which Snoop Dogg has always been closely linked, having controversially associated himself with one of California’s biggest gangs, the Crips. Suddenly, gang culture was part of the pop culture mainstream.” Snoop reflecting on his success in 1993, “It’s the feeling of a straight ghetto man finally proving his stuff to the whole society.”

402. “Dig Me Out,” Sleater-Kinney. Songwriters: Sleater-Kinney; Did Not Chart; 1997. The punk rock trio Sleater-Kinney formed their classic lineup with the 1997 “Dig Me Out” album (Carrie Brownstein, Corin Tucker, Janet Weiss) and that record sold over 100,000 copies, the most successful of their career. Brownstien and Tucker thought that new drummer Janet Wiess came up with a beat so solid on the title track that “you could practically bang your head against it.” Rob Smith of the Diffuser website on “Dig Me Out,” “Immediately the listener is pulled into the drama of a relationship turned toxic. ‘Do you get nervous watching me bleed?’ Tucker sings, as she and Brownstein play the dissonant chords that ground the song. Tucker’s keening upper register in the choruses is dramatic and jarring at once, bringing one’s full attention to the pain at the heart of the lyrics.” This is a band that never played background music.

401. “She’s a Star,” James. Songwriters: James; Did Not Chart; 1997. The English rock band Jams formed in Manchester in 1982, but didn’t break commercially until the 1990s, when they released the Top Ten U.K. singles “Sit Down,” “Sound,” and “She’s a Star.” (The band had a gold U.S. album with 1993’s “Laid” – the title track found alt-rock airplay despite, or because of, sounding like a U2 outtake). “She’s a Star” has a most unusual theme from a male rock band, it’s about a woman who dumbs herself down, feeling that otherwise she’d be rejected by her lover. U.K listeners had a different interpretation. Celine Teo-Blockey from the Under the Radar website, “’She’s a Star’ captured that moment our adoration of Princess Diana reached its fevered peak.”