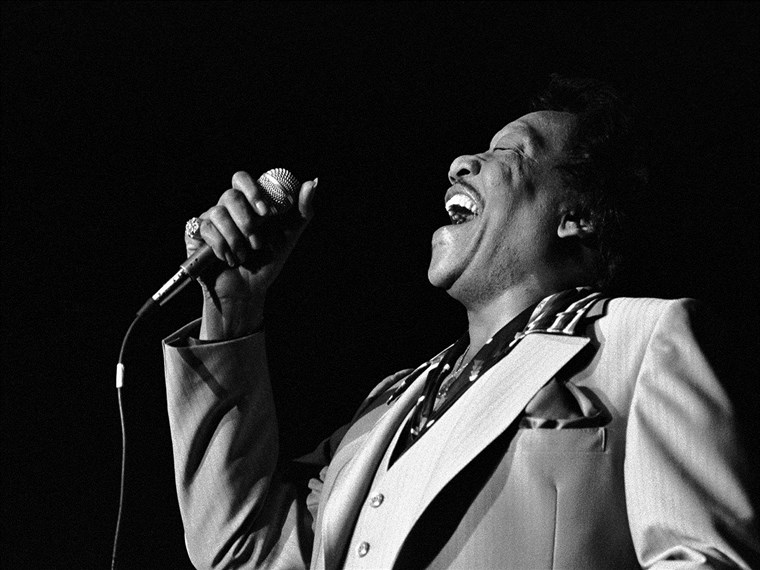 940. “Good Times, Bad Times,” Led Zeppelin. Songwriters: Jimmy Page, John Paul Jones, John Bonham, Robert Plant; Did Not Chart; 1969. On the opening track of their debut album, Led Zeppelin displayed their melodicism and their incomparable technical expertise, as well as their thundering hard rock swagger and Robert Plant’s tongue in check, rock god panache. John Paul Jones, “Usually anything (by Led Zeppelin) with lots of notes was mine and anything with chunky chords was Page’s. Things like ‘Good Times Bad Times,’ those are my sort of riffs, they’re quite busy.” Jimmy Page, “John Paul Jones came up with the riff. I had the chorus. John Bonham applied the bass-drum pattern. That one really shaped our writing process. It was like, ‘Wow, everybody’s erupting at once.’ It really knocked everybody sideways when they heard the bass drum pattern, because I think everyone was laying bets that Bonzo was using two bass drums, but he only had one.”

939. “Lead Me On,” Bobby Bland. Songwriter: Deadric Malone (Don Robey); #9 R&B; 1960. Bobby Bland started performing in Memphis gospel groups in the late 1940s and worked with B.B. King as a member of R&B collective The Beale Streeters. He recorded for several years before breaking through in 1957 with the #1 R&B single “Farther Up the Road.” Author Charles Farley on this 1960 R&B hit, “’Lead Me On’ may be the ultimate Bobby Bland song that unloads just about everything Bobby and the band had to offer: flute, organ, strings, piano, choir, guitar, Bobby, everything melding perfectly together in one tight, billowing package, and, of course, opening with one of the most ominous couplets of all bluesdom: ‘You know how it feels, you understand/What it is to be a stranger in this unfriendly land.’” A summary from author John Floyd, “A song of despair so bottomless it can crumble even the most stable of emotional foundations.” Heavy stuff, indeed, and never mind the legal credit, “Lead Me On” was written by Al Braggs, not by label executive Don Robey who has been described by Texas music expert Michael Corcoran as “half black, half Jewish, all gangster.” Bland scored over 25 R&B Top Ten singles from 1957 to 1974 while appearing on the Top Forty a grand total of four times.

938. “Hero Takes a Fall,”Bangles. Songwriters: Susanna Hoffs, Vicki Peterson; Did Not Chart; 1984. The Bangles formed in Los Angeles during the early 1980s and were part of that city’s Paisley Underground scene, which was a group of bands that played 1960’s inspired pop/rock music. Lead guitarist Vicki Peterson of the all female quartet on their 1984 single “Hero Takes a Fall,” “We were thinking along very classical lines of classical tragedies where there’s often a flaw to the hero. There’s often an Achilles heel, something that takes him down at some point, and we were interested in that concept.” Rock critic Jim Connelly, “More psychedelic than the Go-Gos and with better songs than the Runaways, on (the band’s debut album) ‘All Over The Place,’ the Bangles deployed a perfect synthesis of stinging alt-rock guitars and girl-group harmonies. And nowhere was it deployed better on the lead single, ‘Hero Takes a Fall,’ in which those aforementioned harmonies and stinging guitars pop in and out of the mix through the entire songs, creating an irresistible combination of melody and noise.” Susannah Hoffs, “When I look back on my writing relationship with Vicki I think that song was kind of a milestone in terms of our collaboration.”

937. “Until You Come Back to Me,” Aretha Franklin. Songwriters: Morris Broadnax, Clarence Paul, Stevie Wonder; #3 pop/#1 R&B; 1973. Stevie Wonder’s dominance of pop radio during the 1970s wasn’t limited to his own music, he also had writing credits on “It’s a Shame” by The Spinners, “The Tears of a Clown” by The Miracles, “Tell Me Something Good” by Rufus and Aretha Franklin’s “Until You Come Back to Me,” her final Top Ten pop hit of the decade. Wonder had recorded this song in 1967, but his original version wasn’t released until 1977. In the meantime, he pitched this lost love number to Aretha and it became one of her best, and most straightforward, pop productions of the decade. Bassist Chuck Rainey, “I still remember that groove, and when things groove like that, you smile like you’re George Jefferson.”

936. “Dirty World,” Traveling Wilburys. Songwriters: Bob Dylan, George Harrison, Tom Petty, Jeff Lynne, Roy Orbison; Did Not Chart; 1988. One rarely hears Dylan having as much fun as he does on the car as sex metaphor number “Dirty World,” where he loves his woman’s five speed gear box. Tom Petty on Dylan, “There’s nobody I’ve ever met who knows more about the craft of how to put a song together than he does. I learned so much from just watching him work. He has an artist’s mind and can find in a line the key word and think how to embellish it to bring the line out. I had never written more words than I needed, but he tended to write lots and lots of verses, then he’ll say, this verse is better than that, or this line. Slowly this great picture emerges. He was very good in The Traveling Wilburys: when somebody had a line, he could make it a lot better in big ways.” It’s difficult to imagine any other context where Dylan would sing about loving a woman’s “parts and service.”

935. “Do Ya,” Electric Light Orchestra. Songwriter: Jeff Lynne; #24 pop; 1976. “Do Ya” was originally released by The Move as a B-side to “California Man” and became a minor U.S. hit, going to #93 on the pop charts in 1972. The original sounds like a garage demo compared to the re-recorded 1976 version, where Jeff Lynne added both sonic clarity and the cello riffs/layered vocals that were ELO’s stock in trade. However, it’s that classic rock opening riff that snags the listener like a drooling Baptist preacher seizing a Sunday morning collection plate. Tom Petty, “Just about every ELO single killed me. The first time I noticed (Jeff Lynne) was when The Move released ‘Do Ya.’ I just thought that was this incredible thing. And then he later did it with ELO and it was a whole new look at that song. It was really good.” Robert Christgau, “’Do Ya’ was every critic’s pick to click in 1972 but didn’t impact commercially until it was smoothed over for ELO by author Lynne, whose input is essential.”

934. “No Matter What,” Badfinger. Songwriter: Pete Ham; #8 pop; 1970. The British rock band Badfinger benefited from an association with The Beatles early in their career; they were signed to Apple Records and Paul McCartney wrote their first hit, the international Top Ten smash “Come and Get It.” Guitarist Pete Ham wrote the melodic “No Matter What.” With its simple theme of romantic devotion, economical band performance, and crisp harmonies, it is considered one of the basic templates for 1970’s power pop. Author Michael Gallucci, “Every aspiring power-pop band should listen to ‘No Matter What’ to hear how it’s done. From the terrific opening riff to the false ending, it’s pure pop heaven.” Badfinger proved to have talent beyond the sum of their influences and became an important band on their own merits.

933. “No Woman, No Cry,” Bob Marley. Songwriter: Vincent Ford; Did Not Chart; 1975. Casual pop music fans didn’t know much about reggae legend Bob Marley during the 1970s, but they heard his songs from other sources. Johnny Nash scored a #12 pop hit in 1972 with the Marley composition “Stir It Up” and Eric Clapton had a #1 hit with the cop killing number “I Shot the Sheriff” in 1974. “No Woman, No Cry,” Marley’s reflection on growing up in poverty stricken Jamaica, was first released on the 1974 album “Natty Dread,” but gets a much more memorable reading on the 1975 “Live!” release. The audience participation gives a feel of community to the slow hymnal sound and the song turns into a celebration on the “Everything’s gonna be alright!” chant. “No Woman, No Cry” was most assuredly a Marley composition, but the writing credit went to a man who ran a soup kitchen in Trenchtown.

932. “There Goes My Baby,” The Drifters. Songwriters: Benjamin Nelson, Lover Patterson, George Treadwell; #2 pop/#1 R&B; 1959. Atlantic Records executive Jerry Wexler wanted a streamlined production sound for The Drifters, but Jerry Leiber and Mike Stoller had other ideas. The producers used a Brazilian drumbeat, performed with an out-of-tune timpani, then added a string section to juxtapose against Ben E. King’s powerful baritone voice on “There Goes My Baby.” Author Ken Emerson, “No one had ever been so audacious as to wed the Italian bastardization of a Brazilian samba to an ersatz Russian string orchestration on a rhythm-and-blues record by and African-American quartet.” Leiber quoting Jerry Wexler’s reaction, “It’s dog meat. You’ve wasted our money on an overpriced production that sounds like a radio caught between two stations. It’s a goddamn awful mess!” Leiber and Stoller had evolved from blues aficionados to early catalysts of the Wall of Sound and the Drifters scored their biggest hit during the 1950s in the process.

931. “Ray of Light,” Madonna. Songwriters: Madonna, William Orbit, Clive Muldoon, Dave Curtiss, Christine Leach; #5 pop; 1998. Curtiss Maldoon, an English folk duo, released an eccentric acoustic ballad/dirge titled “Sepheryn” in 1972. “Ray of Light” takes much of the lyrics from “Sepheryn” and unleashes them into the world of highly produced techno music, again putting Madonna at the center of a pop music trend. Journalist Mattew Rettenmund described the song’s appeal as “an orgiastic declaration of freedom and transition.” Christopher Rosa of Glamour, “Widely credited for helping drive electronica into mainstream pop, ‘Ray of Light’ is an absolute rush of techno euphoria, a spinning, sparkly ode to the universe and all its wonderment. It’s a song that doesn’t just compel you to dance but makes you feel everything around you, like ecstasy without the drugs. And you’ll never want the high to end.” The techno assault makes you feel like you are in motion or involved in time travel or some other world altering experience.