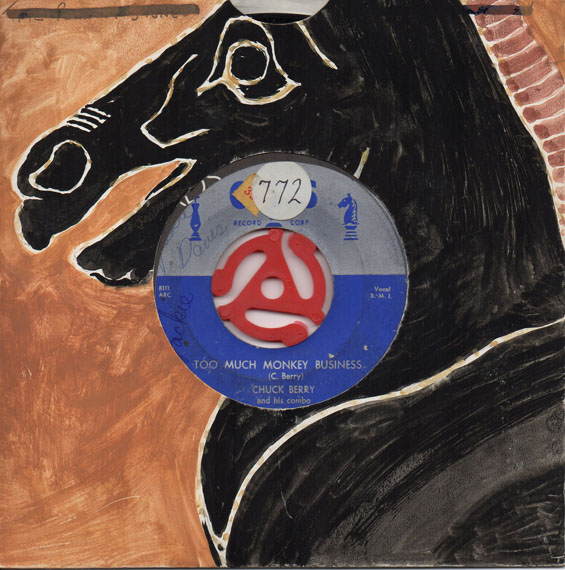 910.  “Forever and Ever, Amen,” Randy Travis.  Songwriters: Paul Overstreet, Don Schlitz; #1 country; 1987. Paul Overstreet went from sleeping in his car in Nashville to being one of the city’s most successful songwriters. He also had a string of nine Top Ten hits as a performer from 1988 to 1991. Still, he and Don Schlitz were pitching their material through the normal business process in 1987 – they hoped Travis would cut “Forever and Ever, Amen” but had no expectations that it would become his signature song.  Lyrically inspired by “The Lord’s Prayer,” “Forever and Ever, Amen” is a pledge of eternal love delivered with a smooth matter-of-fact confidence. With a lyric that’s clever without being cute and a tone that reflects devotion without being cloying, it’s a perfectly written and delivered country love song.

909.  “I Shall Be Released,” Bob Dylan.  Songwriter: Bob Dylan; Did Not Chart; 1971. Rolling Stone, “With its simple, evocative tale of a prisoner yearning for freedom, this rock hymn was part of a conscious effort by Dylan to move away from the sprawling imagery of his mid-Sixties masterpieces. “In ’68 (Dylan told) … me how he was writing shorter lines, with every line meaning something, Allen Ginsberg once said. “From that time came some of the stuff … like ‘I Shall Be Released.’ There was to be no wasted language.” Dylan originally recorded “I Shall Be Released” with The Band in 1967 as part of “The Basement Tapes” sessions and that group included it on their 1968 album “Music from Big Pink.” Dylan recorded a new version for his “Greatest Hits Volume II” compilation. This stripped down version, with accompaniment only by second guitarist Happy Traum, simplifies the message of hope. An often covered song, “I Shall Be Released” also works as a statement of personal and spiritual salvation.

908.  “Only the Lonely (Know the Way I Feel),” Roy Orbison.  Songwriters: Roy Orbison, Joe Melson; #2 pop; 1960.  Although often considered a first generation rock ‘n’ roll star, Wink, Texas native Roy Orbison didn’t have any pop Top 40 success during the 1950s. “Only the Lonely” was Orbison’s breakthrough pop hit, written with his frequent collaborator Joe Melson and peaking at #2 on the pop charts. Orbison’s material wasn’t crossing over to the country charts during the 1960s, despite being recorded in Nashville with that city’s top session players.  Music critic Stephen Holden, “The voice propelling ‘Only the Lonely’ expressed a clenched, driven urgency, as Orbison detonated a small emotional explosion in two and a half minutes.  As the song climbed to a peak, the singer’s voice metamorphosed from a grim Texan twang into a keening, high tenor that arced into a half-yodeled falsetto cry before plunging back to earth.”

907.  “Too Much Monkey Business,” Chuck Berry and his Combo. Songwriter: Chuck Berry; #4 R&B; 1956. On this 1956 R&B hit, Berry notes how powerless we are in many situations, but reduces his “botheration” by withdrawing from any monkey business. Rolling Stone magazine, “In his mind, everything was a hassle – work, shopping, dating, school, war, work again – and he laid each nuisance out smartly in concise proto-raps before kicking into the song’s memorable chorus.” This simple concept, about trying to avoid irritations from The Man, had an amazing impact with covers by The Kinks, The Hollies, the Yardbirds, Elvis Presley, Leon Russell, and The Beatles, among others. Also, Bob Dylan admittedly drew inspiration from “Too Much Monkey Business” for “Subterranean Homesick Blues.” Best cover – Sleepy LaBeef. He sounds like a lion playing with a kitten before eating it.

906.  “Night Life,” Willie Nelson.  Songwriter: Willie Nelson; Did Not Chart; 1960.  Willie Nelson was channeling the type of deep blues that Hank Williams brought into country music with his 1960 single “Night Life,” a song that Ray Price covered for a country hit in 1963. Author Joe Nick Patoski, “’Night Life’ was from another realm. Mature, deep, and thoughtful, the slow, yearning blues had been put together in his head during long drives across Houston. At Gold Star (Recording Studio), he was surrounded by musicians who could articulate his musical thoughts. He sang the words with confident phrasing that had never been heard on any previous recording he’d done. Paul Buskirk’s and Willie’s guitar leads were straight out of the T-Bone Walker playbook, while Dick Shannon’s bluesy saxophone was pure Texas tenor. If not for Herb Remington’s low-note hokum on his steel guitar and his Hawaiian flourishes, the song could have passed for race music.” Needing quick cash, Nelson sold “Night Life” to guitar instructor Paul Buskirk, for the grand sum of $150, and Nelson’s 1960 recording of the song was released under the name Paul Biskirk and the Little Men featuring Hugh Nelson.

905.  “Landslide,” Fleetwood Mac.  Songwriter: Stevie Nicks; Did Not Chart; 1975.  Before joining Fleetwood Mac, Stevie Nicks and Lindsay Buckingham had been working as a duo without commercial success and Nicks was being pressured by her father to quit the music business. With a snow storm falling around her in Aspen, Colorado, Nicks pondered the phases of her life in the beautifully delivered “Landslide.” Rick Moore of American Songwriter, “It’s an emotional lyric, and while it may seem simple, the introspection of the words resonated with millions of record buyers – mostly female, one would guess – who helped make the eponymous debut album by this Fleetwood Mac lineup one of the biggest multi-platinum albums of the 1970s.” Lindsey on her state of mind, “I did already feel old in a lot of ways. I’d been working as a waitress and a cleaning lady for years. I was tired.” A gracious cover by the Dixie Chicks peaked in the Top Ten in both the pop and country charts in 2002.

904.  “The One I Love,” R.E.M.  Songwriters: Bill Berry, Mike Mills, Michael Stipe, Peter Buck; #9 pop; 1987. After years of rave reviews, R.E.M. finally broke pop with this disparaging garage rocker about psychological dominance, with a chorus that consists of Micheal Stipe bellowing “Firrreee” four times. Bassist Mike Mills, “I remember Peter, showing me that riff and thinking it was pretty cool, and then the rest of the song flowed from there. We played the whole song as an instrumental until Michael came up with some vocals for it.” Stipe, “That song just came up from somewhere, and I recognized it as being real violent and awful, but it wasn’t directed at any one person. I would never, ever write a song like that. Even if there was one person in the world thinking, ‘This song is about me,’ I could never sing it or put it out. It’s probably better that they just think it’s a love song at this point.” Producer Scott Litt, proclaiming commercial ambitions that the band would never cop to, “With R.E.M., I thought it was important to show that the music belongs on the radio, that it was every bit as worthy as Whitney Houston or whatever else was on there. It was against my nature to do something murky – as opposed to raw – and basically I wanted to treat their vocals differently on (the) ‘Document’ (album). They weren’t really a great singles band then, but they became one, beginning with ‘The One I Love’ on that album. It’s a very linear song: the vocal stops, then you hear the drums, then the guitar comes in and takes your interest.”

903.  “Dance the Night Away,” Van Halen.  Songwriters: Eddie Van Halen, Alex Van Halen, Michael Anthony, David Lee Roth; #15 pop; 1979. While Van Halen’s debut album had a minor Top Forty hit with their cover of The Kinks classic “You Really Got Me,” Dance the Night Away” from “Van Halen II” was the band’s true pop breakthrough. Reportedly inspired by Fleetwood Mac’s “Go Your Own Way,” this feel good rocker that highlighted Michael Anthony’s harmony singing expanded the group’s audience beyond the teenage boy hard rock demographic. Alex Van Halen added to the dance vibe by incorporating a few Latin tinges in the percussion. Also, it was pretty impressive discipline in that the guy being touted as the hottest guitar slinger since Hendrix didn’t even bother putting a solo on a surefire pop hit. Randall Roberts of the “Los Angeles Times,” “Eddie’s penchant for ridiculous solo runs often eclipsed his skill at arranging a few choice riffs just so and harnessing them in service of Brill Building-structured pop songs. ‘Dance the Night Away’ is like ‘Dancing in the Streets’ or ‘The Loco-Motion’ but driven by a yowler, two rhythm jocks and a guitarist good enough to hold back when he needed to.” Comedian Sean O’Connor in 2020, “I loved Van Halen so much growing up, and to be honest, I haven’t listened much as an adult. But listening all day yesterday, I realized what makes them great, every song sounds like a dog wearing sunglasses.”

902.  “Spirit in the Sky,” Norman Greenbaum.  Songwriter: Norman Greenbaum; #3 pop; 1970. “Spirit in the Sky” wasn’t the first explicitly Christian song to reach the Top Forty – The Impressions went to #14 in 1965 with “People Get Ready” and “Oh Happy Day” by the Edwin Hawkin Singers went to #4 in 1969. Jewish singer/Massachusetts native Norman Greenbaum brought Christianity into the context of rock ‘n’ roll with his fuzztone guitar, a beat that sounded like glam rock before that genre was defined, and Russell DaShiell’s string bending fills, which he referred to as the “beep beeps.” Greenbaum on his inspirations, “I had come across a greeting card that said ‘Spirit in the Sky.’ And it was American Indians sitting in front of a tepee, with the fire going and being spiritual towards what they had deemed God, which was a spirit in the sky. The words were inspired by listening to country-gospel lyrics, Porter Wagoner leading the way.”

901.  “Beyond Belief,” Elvis Costello and the Attractions. Songwriter: Elvis Costello; Did Not Chart; 1982.  Working with former Beatles recording engineer Geoff Emerick as producer, Costello went for a sophisticated pop sound on his 1982 “Imperial Bedroom” album.  Costello on his swirling look at alcoholism that kicks off the record, “The big change of ‘Imperial Bedroom’ was giving yourself more space to try things. We had never been in the studio for 12 weeks. We were also moving into the period of big open-spaced music — U2, Echo and the Bunnymen — and suddenly our tight little songs were out of step. This is a ranting kind of song. I was consciously writing words that didn’t make sense — to make a blurred picture, because I was living a blurred life. But Pete Thomas’ drumming is so insane. I felt if I let him have his energy, the rest of us played more orchestrally and I sang quietly, it would be much more persuasive. It was the closest we came to that big music – and we never did that again. I didn’t want to sound like we were trying to catch up with the young guys.”  Music journalist Chad Clark, “The song drops you into a suspended, swirling reverie with a single bass note, a faint and floating organ sound, and a jazz-like drum rhythm that keeps the floor slipping beneath your feet. Most notably: There is no guitar. The music seems to hover and float mid-air. Nobody knew The Attractions could do this.”