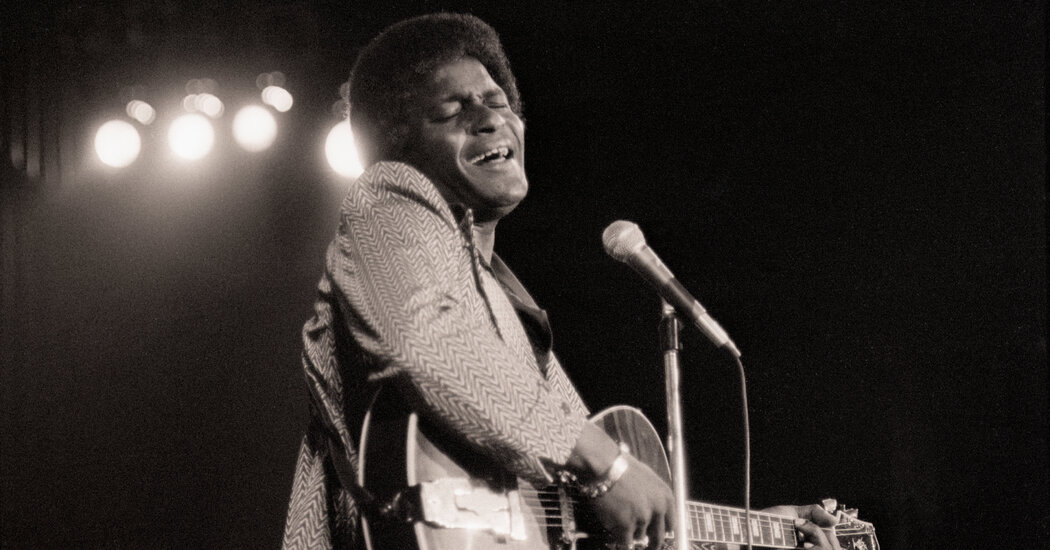 840. “Me, Myself, and I,” De La Soul. Songwriters: George Clinton, Paul Huston, David Jolicouer, Vincent Mason, Kyle Mercer, Philippe Wynne; #34 pop/#1 R&B; 1989. As so often happens, De La Soul mixed something familiar with something new to break pop in 1989 with their ode to individualism “Me, Myself, and I.” Rod Houston of Tommy Boy Records, “That massive single actually was a last-minute throw-in. ’Me, Myself, and I’ was not part of the original album, but the feeling was that we needed something that would work for the radio. They were given the directive to go back and come back with something else. And they said, ‘Okay, well, we’ll do that.’ And they went and did their thing and came back and said, “Well, how about this?’ We heard that Funkadelic sample and we were like, ‘Oh, that’ll work!’” Music journalist Richard Watson, “Powered by an infectious central sample of Funkadelic’s ‘(Not Just) Knee Deep, ‘Me, Myself and I’ lit the fuse for the band’s mainstream explosion, and while the Plugs would grow increasingly weary of performing the song to pop crowds unhip to their oeuvre, the tune’s individualist ethos, if not its aesthetic, would remain central to everything that followed.”

839. “It’s a Wonderful Lie,” Paul Westerberg. Songwriter: Paul Westerberg; Did Not Chart; 1999. Former Replacements frontman Paul Westerberg was in his early forties when he penned “It’s a Wonderful Lie,” and he needed deception more than ever: “How am I lookin’, I don’t want the truth/What am I doin’/I ain’t in my youth/I’m past my prime, or was that just a pose?/It’s a wonderful lie, I still get by on those.” Producer Don Was on the seemingly autobiographical nature of the 1999 “Suicaine Gratification” album, “A guy like Paul will purposely make that trail disappear. He reveals something deep inside and then turns his back.” And that’s the overall impact of “It’s a Wonderful Lie,” Westerberg is simultaneously pouring his heart out the listener with a reminder that he’ll always be a good arm’s length out of distance. Westerberg on his winning by losing philosophy, “People like to see human error when it’s honest. When people see you swing and miss, they start to root for you.”

838. “You Don’t Miss Your Water,” William Bell. Songwriter: William Bell; #95 pop; 1961. Memphis native William Bell (nee William Yarbrough) served as a backing musician for Rufus Thomas in the late 1950s and was signed to Stax Records in 1961. Bell never crossed over to any significant U.S. pop success during the 1960s, however, his 1968 single “Private Number,” a duet with Judy Clay, was a #8 U.K. hit. Bell was backed by The Mar-keys on the gospel influenced cheating number “You Don’t Miss Your Water,” a song brought into the world of country rock by The Byrds on their “Sweetheart of the Rodeo” album. Bell on his inspiration on this tale of heartbreak, “I was on a tour in New York with Old Man Phineas’s band (a reference to Memphis jazzman Phineas Newborn, Sr.). I was lonely in the hotel room one night, and it was pouring down rain and everything, so I wrote this particular song. I was like an old soul, even as a kid.” Author Robert Gordon, “’You Don’t Miss Your Water’ was a country music ballad baptized in a black church feel.”

837. “Sheena Is a Punk Rocker,” The Ramones. Songwriters: Tony Bongiovi, Tommy Ramone; #81 pop; 1977. Joey Ramone on this mixture of bubblegum pop, punk rebellion, and the Beach Boys, “’Sheena Is A Punk Rocker’ first came out as a single. I played it for (Sire Records President) Seymour Stein. He flipped out and said, ‘We gotta record that song now.’ It was like back in the ’50s; you’d rush into the studio because you thought you had a hit, then put it right out. To me ‘Sheena’ was the first surf/punk rock/teenage rebellion song. I combined (the comic book character) Sheena, Queen of the Jungle with the primalness of punk rock. Then Sheena is brought into the modern day: ‘But she just couldn’t stay/she had to break away/well New York City really has it all.’ It was funny because all the girls in New York seemed to change their name to Sheena after that. Everybody was a Sheena.” From the Louder website, “For many people this song was their first introduction to the concept of punk rock. And what an introduction it was. Released in May ’77, it essentially beat a Beach Boys melody to death with a spiked bat.”

836. “Is Anybody Goin’ to San Antone,” Charley Pride. Songwriters: Glenn Martin, David Kerby; #1 country, 1970. Despite his surname, Charley Pride was so unassuming that it’s easy to forget what a major star he was. An African-American who broke through in music’s most conservative genre in the mid-1960s, he would eventually score twenty-nine #1 country hits. The swinging, choppy fiddle riffs on “San Antone” belie the sadness of a man who prefers homelessness to staying in a bad relationship. Texas stoner legend Doug Sahm did a 1973 cover version that became a standard part of his repertoire.

835. “I’m Bad, I’m Nationwide,” ZZ Top. Songwriters: Billy Gibbons, Dusty Hill, Frank Beard Did Not Chart; 1979. ZZ Top’s 1979 “Degüello” album, their first platinum effort, took the Texas blues based boogie band back to the Top Forty for only the second time, with their funky cover of the 1968 Sam & Dave hit “I Thank You.” However, in the long term, the album is best known for the album tracks “She Loves My Automobile,” the anthem/sing along “Cheap Sunglasses” and the fine fox cruising of “I’m Bad, I’m Nationwide.” The deep groove of “I’m Bad, I’m Nationwide” was paired with lyrical images – nylon wearing sexy women, sleek cars, Lucky Strikes smokes, and a too bad to be messed with attitude – that the band would capitalize on as MTV stars during the 1980s. Billy Gibbons on his philosophy, “The blues is life itself.”

834. “Caldonia,” Louis Jordan and His Tympany Five. Songwriter: Fleecie Moore (Louis Jordan); #6 pop/#1 R&B; 1945. Louis Jordan, the pride of Brinkley, Arkansas, was the king of 1940s jump blues and a significant influence on 1950’s rock ‘n’ roll. His appeal was so broad that from 1940 to 1951, he released over fifty Top Ten R&B hits, as well as scoring #1 crossover hits on the pop AND country charts. “Caldonia,” with its tagline “Caldone-YAH! Caldone-YAH!What makes your big head so hard!?”, was such a sensation that it was a simultaneously a hit for Jordan, Woody Herman and His Orchestra (#2 pop), and Erskine Hawkins (#12 pop/#2 R&B). The Hawkins record was described by Billboard as being a “rock and roll” effort, which was reportedly the first time that phrase was used in print to describe a style of music. Author John Chilton, “One thing’s for certain, ‘Caldonia’ wasn’t a ‘cotton-field’ blues, it was a ‘bar-room’ blues.” Legal issues concerning the song would haunt Jordan for several years, Sippie Wallace claimed the song was stolen from his 1920’s composition “Caldonia Blues” and there were lyrical similarities to the 1938 recording “Old Man Ben” by Hot Lips Page. Eventually, Jordan prevailed against a plagiarism that went all the way to the Supreme Court. However, assigning the songwriting credit to his wife Fleecie Moore was no longer a good idea after their divorce in 1947. Jordan entries hovering just outside this list include the swinging “Five Guys Named Moe,” the henhouse favorite “Ain’t Nobody Here But Us Chickens,” and the post lust obituary “Jack, You’re Dead.”

833. “Let’s Get It On,” Marvin Gaye. Songwriters: Marvin Gage, Ed Townsend; #1 pop/#1 R&B; 1973. After addressing serious sociological concerns on the early 1970’s albums “What’s Going On” and “Trouble Man,” Marvin Gaye went back to the bedroom on “Let’s Get It On,” a direct request for sexual gratification. The wah wah guitar notes on the intro sounds like a carrion call to ever stripper on the planet and there has never been a more humorous pick-up line than, “We’re all sensitive people.” Song co-writer Ed Townsend said the audaciously seductive performance was inspired by an interaction with an attractive teenager in the recording studio. Townsend, “Marvin could sing the Lord’s Prayer and it would have sexual overtones. The presence of this young girl compelled him to perform the song to her and in so doing, it was transformed into the masterpiece of raw emotion we know so well.”

832. “ABC,” The Jackson 5. Songwriters (The Corporation – Berry Gordy, Freddie Perren, Alphonzo Mizell, Deke Richards; #1 pop/#1 R&B; 1970. The Jackson 5 started performing in 1964 as The Jackson Brothers, under the tutelage of their father Joe Jackson. After signing with Motown in 1969, Berry Gordy formed the songwriting team known as “The Corporation” to write and producer their material. (The generic sounding name served to hide individual credits, after his 1969 lawsuit with songwriters Holland-Dozier-Holland, Gordy did not want a creative team to become more famous than the musical group he was marketing.) “ABC,” easy as one-two-three, winningly sounded like a playground/bubblegum version of Sly & the Family Stone and became the second of four successive #1 pop singles for the Indiana siblings.

831. “I Melt with You,” Modern English. Songwriters: Robbie Grey, Gary McDowell, Richard Brown, Michael Conroy, Stephen Walker; #78 pop; 1983. Modern English were a group of pasty U.K. dweebs with bad haircuts and silly clothes. That is to say, they looked like a lot of bands from their era. “I Melt with You” is one of those songs that was never a hit, but from exposure via MTV and movie soundtracks and cover versions, has become a new wave classic. Singer Robbie Grey, on his endlessly catchy pop triumph, “I don’t think many people realized it was about a couple making love as the bomb dropped. As they made love, they become one and melt together. I’d always been shouting on songs before, I’d never really sung on a song. And there’s not really any singing on this either, it’s more spoken, but Hugh Jones the producer said, ‘Don’t shout into the microphone, just talk into it.’ I’d never done that before – I was a punk rocker. And so, I did. I just kind of stood back and mouthed the words. And I think that’s a lot of the attraction of the verses on ‘I Melt with You’ is that almost spoken quality.” From the Consequence of Sound website, “Modern English’s landmark hit has managed to tap into the lives of every generation since its 1982 debut. It’s a simple construction – guitars and drums and timeless poetry – and literally everyone who’s ever been head over heels about someone can relate to its central thesis: ‘There’s nothing you and I won’t do/ I’ll stop the world and melt with you.