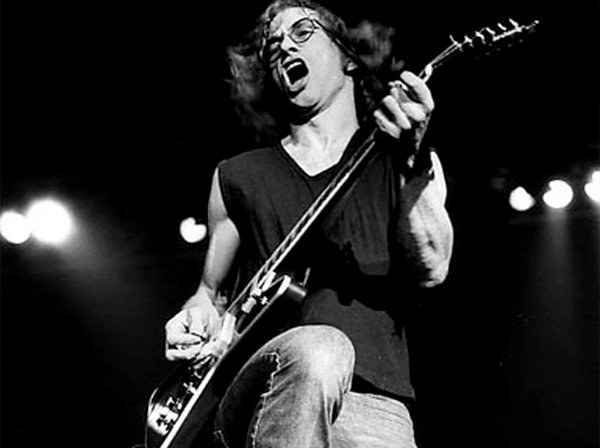 830. “Killer Queen,” Queen. Songwriter: Freddie Mercury; #12 pop; 1974. Brian May and Roger Taylor performed together from 1968 to 1970 as part of the London blues rock band Smile. Farrokh Bulsara, a Smile fan who had encouraged the band to move toward a more theatrical presentation, changed his name to Freddie Mercury and became the lead singer of Queen, a band that included May, Taylor, and bassist John Deacon. Mercury on “Killer Queen,” the band’s breakthrough U.S. single, “People are used to hard rock, energy music from Queen, yet with this single you almost expect Noel Coward to sing it. It’s one of those bowler hat, black suspender belt numbers – not that Coward would wear that. … It’s about a high class call girl. I’m trying to say that classy people can be whores as well. That’s what the song is about, though I’d prefer people to put their interpretation upon it – to read into it what they like.” “Killer Queen” served as a fine introduction to the band’s campy attitude, as well as their refined use of studio innovations, such as multi-tracked guitar work and stacked vocals.

829. “Good Times,” Chic. Songwriters: Bernard Edwards, Nile Rodgers; #1 pop/#1 R&B; 1979. Bernard Edwards and Nile Rodgers were New York session musicians who had worked together since the early 1970s and brought their sleek version of disco to the mainstream with the 1977 Chic hit “Dance, Dance, Dance (Yowsah, Yowsah, Yowsah).” They had their fifth and last Top Forty single with 1979’s “Good Times,” which was a lyrical update of Milton Ager’s 1929 composition “Happy Days Are Here Again” and is arguably the most influential record of the 1970s. Songs that sampled from or replicated the bassline of “Good Times” include The Sugarhill Gang’s “Rapper’s Delight,” Queen’s “Another One Bites the Dust,” Daft Punk’s “All Around the World,” Kurtis Blow’s “The Breaks,” Grandmaster Flash’s “The Adventures of Grandmaster Flash on the Wheels of Steel,” Justin Timberlake’s “Rock Your Body,” Shakira’s “She Wolf,” De La Soul’s “A Roller Skating Jam Named ‘Saturdays’,” LL Cool J’s “Rock the Bells,” and Will Smith’s “It’s All Good.” There are over 200 songs listed that have sampled “Good Times” on the Who Sampled website. Nile Rodgers would later note that the bassline from Chic’s “Good Times” was, shall we say, inspired by the 1974 Kool & the Gang single “Hollywood Swinging.”

828. “Dirty Deeds Done Dirt Cheap,” AC/DC. Songwriters: Angus Young, Malcolm Young, Bon Scott; Did Not Chart; 1976. “Dirty Deeds Done Dirt Cheap” was the title track of a 1976 AC/DC album. (That album wasn’t released in the U.S. until 1981 and had a different track order and three different songs from the original Australian record). One way that AC/DC distinguished themselves from the standard issue 1970’s riff bashers was by incorporating a sense of humor into their image and music. Not to say that they were Shakespearean in their wit, but Bon Scott always kept the proceedings from getting too sober, in every possible way. “Dirty Deeds Done Dirt Cheap” was inspired by a 1960’s cartoon series “Beany and Cecil” that included a villainous character named Dishonest John who carried a business card with that phrase. The lyrics are a nice balance between vengeful threats and Wile E. Coyote tactics.

827. “Ladykillers,” Lush. Songwriter: Miki Berenyi; Did Not Chart; 1996. Lush was a London band fronted by two female musicians/songwriters, whose music started in the shoegaze genre and later harkened back to the late 1970’s new wave era. Their girl group meets alternative rock sound resulted in four U.K. Top 40 singles and intermittent airplay in the U.S, to include this #18 Modern Rock single. “Ladykillers” is a whipsmart look a sexual politics and men who only use women to elevate their own egos. Annie Zaleski of A.V. Club, “Ladykillers’ (is) a punky shot of Blondie-esque new wave that was a welcome antidote to Britpop’s masculine point of view. The song is one big eyeroll toward lame men: overly vain guys who try to lure women with condescending flattery; those who think that acting like a blowhard will get them laid; and dudes who think pitting women against each other or pursuing those who play hard to get is a good strategy. ‘Ladykillers’ is a righteous feminist statement in which Lush reminds those with a Y chromosome that respecting women and treating them like smart, competent human beings is perhaps the best first step.” It’s also a wonderfully arranged rock ‘n’ roll song.

826. “I Never Loved a Man (The Way I Love You),” Aretha Franklin. Songwriter: Ronnie Shannon; #9 pop/#1 R&B; 1967. “I Never Loved a Man” was Aretha Franklin’s first Top Ten single and the start of her ascension as The Queen of Soul in 1967. Drummer Roger Hawkins, “I’ve never experienced so much feeling coming from one human being. When she hit that first chord, we knew everything was going to be all right.” Aretha’s then husband/manager Ted White, “I took (songwriter) Ronnie Shannon to my building, and we talked about what kind of material I wanted for Aretha. He went upstairs and about two hours later came down with ‘I Never Loved a Man.’” The Muscle Shoals musicians didn’t have a hook for the song until Spooner Oldham developed the keyboard pattern for the intro. Oldham, “The song didn’t have a specific meter, really. So the band just kind of looked at each other like, ‘Well, what do we do? We were all off in our little worlds trying to figure out a rhythm or a riff. I just happened to be the one to formulate this little pattern.” Dan Penn, “From there it just sparkles and shines. After everybody heard her sing, ‘You’re no good, heartbreaker,’ she had five instant fans. She was getting all the respect one person can get from those cats.”

825. “Blue Sky Mine,” Midnight Oil. Songwriters: Rob Hirst, Jim Moginie, Peter Garrett, Martin Rotsey, Bones Hillman; #47 pop; 1990. “Blue Sky Mine” is about a moral conundrum. With limited options, should a person take a job that has a negative impact on the environment and the employee’s health? As the lyrics note, “If I work all day at the blue sky mine/There’ll be food on the table tonight.” The song was inspired by the town of Wittenoom in Western Australia which had a thriving economy in the late 1950s/early 1960s, based upon mining asbestos. At its peak, it is estimated that 20,000 people lived in the community. Estimates range that one to three thousand people died of asbestos related diseases. The mine closed in 1966 and the government took steps to close the community due to long term damage to the environment. Today, one person lives in the town and it has been removed from Australia’s official maps. Midnight Oil frontman Peter Garrett in 1990, “We can’t treat the world like a garbage dump, and there’s more to life than profit and loss.” David Frick of Rolling Stone on the musical side of the equation, “A slice of vintage Oils ruckus ‘n’ roll stripped to muscular garage-rock essentials, with the metallic squeal of a Yardbirds-style harp thrown in for good measure.”

824. “Poor Poor Pitiful Me,” Warren Zevon. Songwriter: Warren Zevon; Did Not Chart. Warren Zevon started his career as a songwriter in the1960s and worked as a keyboard player/band leader for The Everly Brothers in the early ‘70s. For his major label debut album, Zevon had support from a Los Angeles all-star crew that included Jackson Browne, Lindsey Buckingham, Phil Everly, Don Henley, Stevie Nicks, and Bonnie Raitt. “Poor Poor Pitiful Me” was a reported spoof on Jackson Browne’s sensitive singer-songwriter style, with Zevon feeling sorry for himself while picking up a barfly who liked to be smacked around. Linda Ronstadt, leaving out the violence, made the song a pop hit in 1977 and Terri Clark took the song to #5 on the country charts in 1996.

823. “The Mountain,” Steve Earle and the Del McCoury Band. Songwriter: Steve Earle; Did Not Chart; 19998. Steve Earle on career planning, Nashville style, “I was sitting in with Del McCoury at the Station Inn in Nashville one night, and I just asked him, straight out: ‘If I wrote a record of bluegrass songs, would you guys accompany me?’ And he said, ‘Yeah.’ Eleven months later, I had the songs ready.” That album was titled “The Mountain” and the title track is about a coal miner who is comforted by his mountain home. However, he’s haunted by both his occupation and the narrow scope of his life (“There’s a chill in the air only miners can feel/There’re ghosts in the tunnels that the company sealed”). Earle, “’The Mountain’ is one of the best songs I’ve ever written.” Levon Helm included a reverent cover on his 2007 “Dirt Farmer” album.

822. “Maggie May,” Rod Stewart. Songwriters: Rod Stewart, Robert Quittenton; #1 pop; 1971. Rod’s breakthrough hit about his woes and regrets about being a boy toy were somewhat based in reality. Stewart, “’Maggie May’ was more or less a true story, about the first woman I had sex with, at the 1961 Beaulieu Jazz Festival. It nearly got left off (the album) because the label said it didn’t have a melody.” Stewart noted in his biography that the woman he later referred to as “Maggie” was “highly disappointed by the blink-and-you’ll-miss-it brevity of the experience.” Stewart changed the name to protect the not so innocent, grabbing the title from a traditional British folk song about a prostitute who robs a sailor. The public found the story of Rod’s disappointment and infatuation with an older woman so captivating that the single and the “Every Picture Tells a Story” album went to #1 in the U.S. and the U.K. simultaneously, making Stewart an international superstar.

821. “What’s Your Name,” Lynyrd Skynyrd. Songwriters: Gary Rossington, Ronnie Van Zant; #13 pop; 1977. Lynyrd Skynyrd’s last Top Forty hit was a road ode with limo rides to the show, hotel barroom fights, booze, the drudgery of travel, and most importantly, the groupies who validated the rock star experience and whose names weren’t even worth remembering. What Ronnie Van Zant lacked in chivalry, he made up for in honesty. Van Zant, on knowing that being a rock star didn’t impress everyone, “There are five kids in my family and I’m the only one who didn’t get a diploma. All the kids got their diplomas hanging in my father’s room and I got my gold records. I’d say he was more proud of their diplomas.”