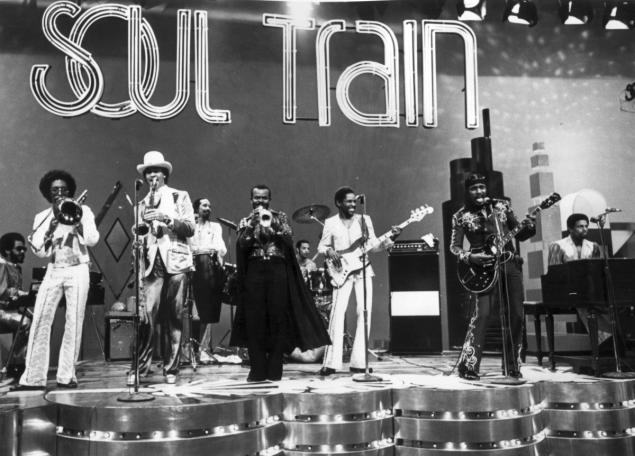 Chuck Brown and the Soul Searchers

720.  “Go All the Way,” Raspberries.  Songwriter: Eric Carmen; #5 pop; 1972. The Raspberries were a Cleveland based rock band who merged the power chords of The Who with the harmonies of the Beach Boys to become one of the legendary acts in the world of “power pop.” “Go All the Way,” a request to consummate a relationship, was the highest charting of the band’s four Top Forty singles.  Overseas, the BBC deduced that this lustful rocker wasn’t about going all the way to the Dairy Queen for a malt and banned the song. The lead track to all four Raspberries albums in the early 1970s were penned by Eric Carmen and were all pop hit singles – “Go All the Way,” “I Wanna Be with You,” “Tonight,” and “Overnight Sensation (Hit Record).” A band always ripe for exploration, the teen frustration, Keith Moon inspired “I Don’t Know What I Want” was their best non-charting effort.

719.  “Psycho Killer,” Talking Heads.  Songwriters: David Byrne, Chris Frantz Tina Weymouth; #92 pop; 1977. The Rhode Island School of Design isn’t widely known as a hotbed of rock ‘n’ roll activity, but that is where guitarist/singer David Byrne and drummer Chris Frantz began performing as The Artistics in 1974. By the summer of 1975, the Talking Heads had formed in New York and, along with Blondie, the Ramones, and Television, made their home at New York’s infamous CBGBs. “Psycho Killer,” from the band’s debut album, was a public introduction based on the fractured thoughts of a potential murderer. David Byrne, “When I started writing this (I got help later), I imagined Alice Cooper doing a Randy Newman-type ballad. Both The Joker and Hannibal Lecter were much more fascinating that the good guys. Everybody sort of roots for the bad guys in movies.” Key musical contribution – Tina Weymouth’s tension heightening bass work.

718.  “It’s All Right,” The Impressions.  Songwriter: Curtis Mayfield; #4 pop/#1 R&B; 1963.  When you are a genius, sometimes it’s easy to write a hit song. Curtis Mayfield, on quickly penning “It’s All Right” backstage before a show, “I was just running my mouth over dreams and creative things and every time I’d talk, Fred (Cash) would say, ‘Well, all right.’ And all of a sudden that hit me as a song. By the time we got dressed, we could’ve gone on-stage and sang that song.” When you are a genius, you’re not too proud to learn from others. Smokey Robinson, discussing The Temptations hit “The Way You Do the Things You Do,” “(Curtis Mayfield) had a song out with The Impressions called ‘It’s Alright” and they sang with this great harmony and I knew The Temptations could sing like that because they had a great harmony sound. Curtis had this high voice like Eddie Kendricks and I wanted to simulate that if possible.” Author Bill Janovitz on the vocal arrangement, “This ensemble approach to the vocals was obviously taken from the men’s gospel background. They each take a lead vocal line or two, slipping back into harmonies at the ends of lines, weaving like jazz players.”

717. “Under My Wheels,” Alice Cooper.  Songwriters: Michael Bruce, Dennis Dunaway, Bob Ezrin; #59 pop; 1971. With his guillotine act, snake handling, and electric chair death ritual, Alice Cooper popularized the concept of theatrical shock rock in the early 1970s. His 1971 single  “Under My Wheels” is inspired chaos. Cooper dreams about vehicular homicide on top of Glen Buxton’s grungy guitar riffs, then some Stax meets Vegas horns turns this rocker into a dance party. Journalist Graeme Ross, “Beneath the schlock, there was some terrific music going on, thanks in a large part to classically trained whizz-kid producer Bob Ezrin, who Cooper often refers to as the George Martin of the band. Drawing on the murky, proto-punk Detroit sound of the Stooges and the MC5, the powerhouse track ‘Under My Wheels’ has one of Cooper’s toughest vocals. It bursts with Motor City grit and mayhem.”

715.  “Time Has Come Today,” The Chamber Brothers.  Songwriters: Willie Chambers, Joseph Chambers; #11; 1967.  The Chamber Brothers were Mississippi natives who formed a gospel and folk oriented act in Los Angeles in 1954. They worked in obscurity until performing at the Newport Folk Festival in 1965, then started moving toward a psychedelic soul sound. The Chamber Brothers had their first Top 40 entry in 1968 with their cover version of Otis Redding’s “I Can’t Turn You Loose.” Their signature hit, the soul power greeting to the protest generation “Time Has Come Today,” demonstrated how far you could go in the 1960s with a cowbell and an unforgettable guitar riff. Willie Chambers on the power of his composition, “When we started playing it in the clubs, people went absolutely crazy, I mean they were screaming. It was frightening for some, they’d just grab ahold of their heads and run out the door.” Perhaps their souls had been psychedelicized.

714.  “Get Down Tonight,” KC and the Sunshine Band.  Songwriters: Howard Wayne Casey, Richard Finch; #1 pop/#1 R&B; 1975. KC and the Sunshine Band formed in the Miami area in 1973 and had their first major success in 1974, penning and playing on the George McCrae #1 pop hit “Rock Your Baby.” They had their own breakthrough success in 1975, copping the title of “Get Down Tonight” from the decidedly unfunky Gilobert O’Sullivan, who went to #7 on the pop charts in 1973 with “Get Down.” One of the definitive hits of the disco era, “Get Down Tonight” conveyed a carefree, party vibe (“do a little dance, make a little love”), but had enough R&B elements to be a #1 hit on both the pop and soul charts. The sped up guitar licks used in the intro and throughout the song was the equivalent of what a sample hook in rap would become in the 1980s and 1990s. Cultural touchstones synonymous with the 1970s – pet rocks, platform shoes, KC and the Sunshine Band.

713.  “Rid of Me,” PJ Harvey.  Songwriter: Paula Jean Harvery; Did Not Chart; 1993.  “Rid of Me” is an anguished mixture of anger and bewilderment toward a cheating lover. The narrator plans on using her sexuality, determination, and her betrayer’s potential sympathy to keep him in the fold. Harvey, “When I wrote ‘Rid of Me,’ I shocked myself. I thought, ‘Well, if I’m shocked, other people might be shocked.’ The sound of the words was powerful, and the rhythm felt clean and simple to roll off the tongue. I knew that this was the type of song I was trying to write. I knew I wanted to work with (producer) Steve Albini from listening to Pixies records, and hearing the sounds he was getting, which were unlike any other sounds that I’d heard on vinyl. I really wanted that very bare, very real sound. I knew that it would suit the songs. It’s like touching real objects or feeling the grain of wood. That’s what his sound is like to me. It’s very tangible. You can almost feel the room.”  As far as I know, Harvey is the only artist to request or demand that her lover lick her injuries in song.

712.  “Louisiana, 1927,” Randy Newman.  Songwriter: Randy Newman; Did Not Chart; 1974.  “The Great Mississippi Flood of 1927” was the most destructive in U.S. history, with the Mississippi River south of Memphis expanding to sixty miles in width and parts of New Orleans submerged in over four feet of water. The storm left hundreds of thousands of people homeless and resulted in approximately 250 deaths. Randy Newman mournfully recounts the damage and then skewers the federal government for an insufficient response on this 1974 album cut. Given the theme, “Louisiana 1927” became relevant again after Hurricane Katrina devastated New Orleans in 2005. Newman, talking about his ties to the city in 2005, “I was born in Los Angeles, but I went to New Orleans when I was, like, a week old. My mother is from there, her family is still there. I lived with her a few years when I was a baby, and I’d go back in the summers. And it was the other place that I knew, and I was interested in the history, and heard about this flood, and I wrote the song.”

711.  “Bustin’ Loose (Part 1),” Chuck Brown and the Soul Searchers.  Songwriter: Chuck Brown; #34 pop/#1 R&B; 1979.  When you hear the phrase “go-go” in a musical context, you might think of Belinda Carlisle unless you lived in the Washington, D.C. area in the late 1970s and 1980s.  “Go-go” music was a percussion heavy offshoot of funk that became associated with our nation’s capital, yet seldom with the pop charts (E.U.’s 1988 #1 hit “Da Butt” was also in the go-go genre).  Chuck Brown was known as “The Godfather of Go-go” and the gimme-the-bridge-ya’ll “Bustin’ Loose” was the hottest slice of funk to hit the pop charts since early ‘70s James Brown.  Rapper Nelly smartly recycled the hook from “Bustin’ Loose” for his 2002 #1 single “Hot in Herre.” Brown on his influence, “Go-Go had some influence on rap because a lot of rap musicians come to my shows. Some of them were students at Howard University. People like Puff Daddy, he’s been to see us when he was a young Howard University student.”