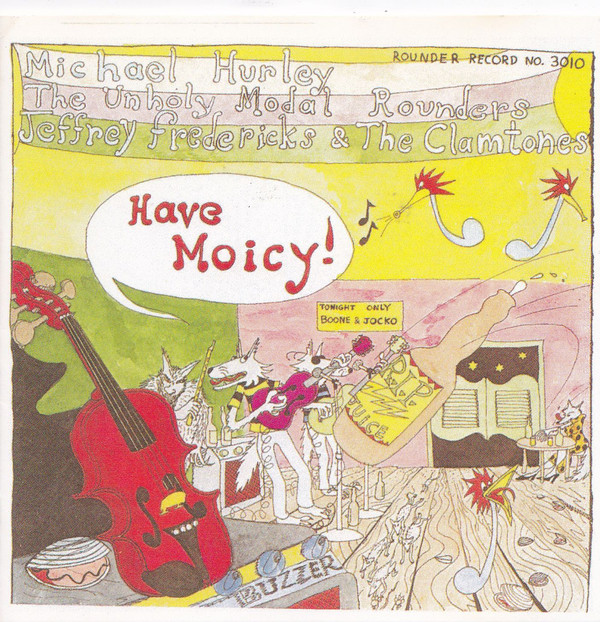 630. “Griselda,” The Unholy Modal Rounders. Songwriter: Antonia Stampfel; Did Not Chart; 1976. Singer Peter Stampfel mixes a boyish sense of wonder and mischievousness on “Griselda,” a song of young, parentally disapproved love. The sense of adventurousness is enhanced by the escapism of the lyrics, with images of woods, lakes, moonlight, and, if all else fails in an attempted romantic conquest, a jug of wine and a promise of marriage. “Griselda” was penned by Antonia Stampfel, the onetime spouse of Peter, who introduced him to his Holy Modal Rounders collaborator Steve Weber in the early 1960s. That duo was originators of a sub-genre known as “freak folk” and the high spirited “Griselda” is definitely in that vein. Peter Stampfel on the “Have Moicy!” album, “When everything comes together, with the right people at the right time with the right ingredients, it’s like serendipitous. Everybody had great songs, and we recorded it in three days flat. We went in fast and sloppy and just got it done. The whole counterculture was pretty strongly in the ditch by the point. That car had been driven off the road and into a tree, at least by ’72. So by ’75, the idea of an underground was really past its prime. But that record epitomizes, resonates with the original, unspoiled countercultural spirit as it was in its heyday. The feeling that people had about this wonderful emerging thing back in ’63 and ’64, it was the feeling that this awesome thing that took everyone by total surprise was going to very soon fix everything, in the most wonderful way possible.”

629. “French Disko,” Stereolab. Songwriters: Tim Gane, Laetitia Sadier; Did Not Chart; 1993. Stereolab is a U.K. band, frequently classified as “avant-pop,” known for their heavily layered vocals and keyboards. Rob Harvilla of The Ringer website on “French Disko,” “An early-’90s garage-pop call to arms, all grimy joy and stormy pathos, that kicks off with Laetitia Sadier singing ‘Though this world’s essentially an/Absurd place to be living in/Doesn’t call for bubble withdrawal.’ The chorus, the simplest and purest of the band’s three-decade career, is a group chant of ‘La résistance!’” Author Ian Martin, “The group’s unique and instantly recognizable sonic identity was Laetitia Sadier’s vocals, which simultaneously embodied a cool detachment and an unaffected romanticism. Sadier’s vocal foil for much of the ’90s was keyboard player Mary Hansen, and the interplay between the two singers helped to define the group up until Hanson’s death in a road accident in 2002. Their combination of deadpan delivery and breezy ‘ba-ba-ba’s reflected a broader dynamic within the band’s music between pop’s desire to give you everything all at once and an avant-garde wariness of making things too easy.” Other Stereolab winning songs include the multi-tiered beauty of “Cybele’s Reverie” and the garage punk meets Europop “John Cage Bubblegum.”

628. “Hold Me Now,” Thompson Twins. Songwriters: Tom Bailey, Alannah Currie, Joe Leeway; #3 pop; 1984. The Thompson Twins formed in the U.K. in 1977 and evolved into an unrelated trio by the time they found international fame, first hitting the U.S. pop charts with the 1983 new wave/dance hit “Lies.” They moved away from synth pop on the aching love song “Hold Me Now.” Alannah Currie, “It’s such an emotional song, we wanted to have that warmth you often can’t get from synthesizers.” Singer Tom Bailey, “It was written as the result of some argument that was resolved between Alannah and myself. We actually decided, well, this is an interesting emotional subject. What it feels like to get back together again after separation and the kind of ideas that come up and the way that emotion and physicality somehow are brought together.” Robert Christgau, “‘Hold Me Now’ is a classic on chord changes alone, i.e., even though Tom Bailey sings it.” Blender Magazine from their 2008 article “The 500 Greatest Songs Since You Were Born,” “A New Wave let’s-stay-together plea so cornball it works.”

627. “A Father and A Son,” Loudon Wainwright III. Songwriter: Loudon Wainwright III; Did Not Chart; 1992. Loudon’s kids were always fair game for his music, whether he was telling them to shut up (“Lullaby”), smacking them (“Hitting You”), or explaining a divorce (“Your Mother and I”). His insecurities with Rufus started with breastfeeding (“Rufus Is a Tit Man”) and continued with the “teenage/middle-age war” of “A Father and a Son.” Of course, we are all familiar with the concept of “daddy’s girls” and “momma’s boys,” but same gender parental relationships can be more competitive. When Rufus first began his career as a singer, he downplayed his issues with his father, but commented in 2020, “We had periods where we almost killed each other. I wish I was speaking figuratively but it was pretty hairy at times.” Of course, being a Loudon Wainwright song, there are still zingers within the turbulence, including, “And I know that I’m miserable; can’t you see?/I just want you to be just like me.”

626. “Shout,” The Isley Brothers. Songwriters: O’Kelly Isley, Jr., Rudolph Isley, Ronald Isley; #47 pop; 1959. The Isley Brothers left Cincinnati for New York in 1957 (lead singer Ronald Isley was 16 years old at the time) and had their first charting hit with “Shout,” a mixture of gospel and R&B that created the subgenre of “frat rock.” Ronald Isley, on his song that turns R&B/rock music into aerobic exercise, “During one of our performances at the Uptown Theater (in Philadelphia), I was singing ‘Lonely Teardrops’ when I saw that everyone in the audience was standing up and really getting into it. The place was packed and the audience was yelling their approval, like at church. The energy level was so strong that I didn’t want to end the song yet. I began to ad-lib, the way Jackie did: ‘You know…you make me wanna shout’ and the band picked right up on it with that galloping beat. The people standing went crazy, and I began to ad-lib more lines, like ‘Kick my heels up’ and ‘Throw my hands up’” I’d wait a second at the end of each line so my brothers and the audience had a chance to answer me with ‘Shout!’ That song just took over.”

625. “Love and Happiness,” Al Green. Songwriters: Al Green, Mabon “Teenie” Hodges; Did Not Chart; 1972. “Love and Happiness” was never a hit single, but it is one of Al Green’s most hard hitting performances. It’s a complete tour de force from the hard driving rhythm section, the call and response gospel backing vocals, the funky Hammond organ sound, and the punchy, staccato horns. Green, “The result was like a slow fever…like mixing explosive chemicals. Everything had to be added at just the right time and at just the right dose.” Teenie Hodges, “Usually my songs were the last ones we did. We’d do an album, they’d need one more song to finish, then we’d do my song. ‘Love and Happiness’ was the last song we cut for that album. We cut it live with Al, and we had a hard time getting the timing right after Al’s intro into the song. On the studio version, you can hear me count off the time on a Coke crate that was near my foot.”

624. “Me and Paul,” Willie Nelson. Songwriter: Willie Nelson; Did Not Chart; 1971. Willie Nelson had a string of mostly minor hits in the 1960s and had penned several classic songs (“Crazy,” “Hello Walls,” “Funny How Time Slips Away”). Still, he was too unconventional for Nashville and he relocated to Austin in the early 1970s. Image wise, he traded suits for jeans and stopped seeing his barber. It’s hard to know when a movement begins, but this chronicle of road life with long time drummer and personal protector Paul English that references drugs and whiskey and poor lifestyle choices in general might have been the sperm meets ovum moment for the “Outlaw Country” genre. One of Paul English’s ancillary duties was to ensure that Willie got paid every night. He never went anywhere without a gun.

623. “She’s About A Mover,” Sir Douglas Quintet. Songwriter: Doug Sahm; #13 pop; 1965. “She’s About a Mover” was the breakthrough hit for one of the most eclectic bands of the 1960s. Producer Huey Meaux, after hearing “She’s a Woman” by the Beatles, “It dawned on me that they were playing the Lake Charles two-step that me and my daddy used to play in Cajun country. I (called Dough Sahm and) said, ‘Bring your guitar and come over, Doug. I’m drunk, but I’ve got that beat.’ And that’s how we got off into ‘She’s About a Mover.’” Author Jan Reid, providing a different version of history, “The song came about one night when the Sir Douglas Quinter were playing and a young man and woman were putting on a dance show in front of the stage. She was throwing a long skirt over her head, and Sahm turned to the others and said, ‘She’s about a mover, isn’t she?’” Keyboardist Augie Meyers went back to the German influence on Texas music for his contribution. Meyers, “Ooom pah pah came first. ‘She’s About a Mover,’ that’s just a polka with a rock ‘n’ roll beat. I played what a bajo sexto (a 12-string bass guitar) player in a Conjunto band would do.” The band tossed in a bit of Ray Charles’ “What I’d Say” into the mix and had an instant Tex Mex party smash.

622. “Peggy Sue,” Buddy Holly. Songwriters: Buddy Holly, Jerry Allison, Norman Petty; #2 pop/#2 R&B; 1957. Jerry Allison, the drummer for Buddy Holly’s Crickets, was in a personal funk after breaking up with girlfriend (and future wife) Peggy Sue Gerron. He successfully appealed to Buddy Holly to change the proposed title of this song from “Cindy Lou” to “Peggy Sue.” The song was originally arranged using a cha-cha beat, but producer Norman Petty suggested that Allison play paradiddles, a rapid strokes drum pattern, that created a rolling rhythm. Petty then accentuated the rhythm by modifying the reverb throughout the recording. Besides his endearing vocals, Holly contributed what music journalist Jimmy Guterman labelled “the greatest rhythm solo in all rock ‘n’ roll.” Peggy Sue Gerron passed away in 2018, once commented on her image, “I think they have me frozen in time, I think when most people think of me, it’s as a young woman frozen in an era that has long passed. But it hasn’t limited me. You have to be you, and I couldn’t stand up and say, well, no, that’s not me.”

621. “Ever Fallen in Love (With Someone You Shouldn’t’ve),” Buzzcocks. Songwriter: Pete Shelley; Did Not Chart; 1978. Songwriter Pete Shelley on his #12 U.K. romantic angst pop hit, “One night in Edinburgh we were in a guest house TV lounge watching the musical ‘Guys and Dolls.’ This line leapt out – ‘Have you ever fallen in love with someone you shouldn’t have?’ The next day the van stopped outside a post office and I wrote the lyrics there. I did have a certain person in mind, but I’ll save that for my kiss and tell. The music just seemed to follow, fully formed.” Producer Martin Rushent, “I felt it was the strongest song that they had written – clever, witty lyrics, great hooklines.” Rock critic Jason Heller, “Shelley sings like a man whose entire existence hangs by a single frayed nerve. ‘Ever Fallen is Love’ is a tribute not only to the notion that punk can be a thoughtful expression of naked feeling, but to Buzzcocks’ idiosyncratic embrace of the finer points of classic pop songcraft.” The U.K. band Fine Young Cannibals had a U.S. dance hit with their 1986 cover version.