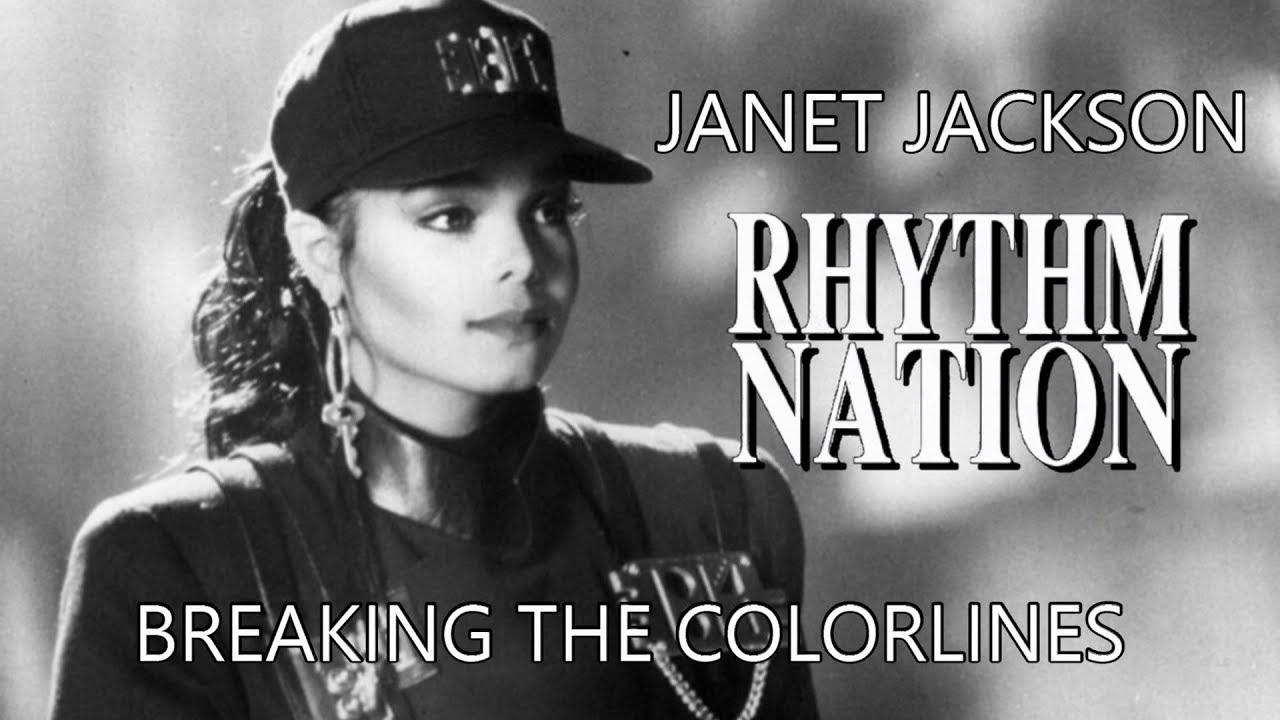 90. “Rhythm Nation,” Janet Jackson. Songwriters: Janet Jackson, James Harris III, Terry Lewis; #2 pop/#1 R&B; 1989. Producer Jimmy Jam, “What really changed with the ‘Rhythm Nation’ was we then had a purpose. It was more directed. And it became more industrial-sounding. Trashcan lids, glass breaking, feet stomping — anything that felt like an army of people, that was sonically what we started going for once the lyrical concept started going in that direction.” Music journalist Michael Cragg, “Opening with chopped-up vocals, ominously cascading drum patterns and a general swirl of confusion, it soon transforms, with military precision, into a taut digital tattoo, Janet addressing the audience like a party leader on the verses before leading them into an actual party by the time the chanting chorus kicks in. Lyrically, the song is a fairly simplistic call to arms – ‘People of the world today, are we looking for a better way of life?’ she asks – but it’s brought to life by the sheer audacity of the production (in the last third, the song constantly disintegrates into a glitchy mass of synths and beats before falling back in line) and the delivery, with Janet’s versatile vocal skipping from hardened and pained to soft and silky almost in the same breath.” Janet Jackson, “I realized that among my friends, we actually had a distinct ‘nation’ of our own. We weren’t interested in drugs or drinking but social change. We also loved music and loved to dance.”

89. “Pretty in Pink,” Psychedelic Furs. Songwriters: John Ashton, Tim Butler, Richard Butler, Vince Ely, Duncan Kilburn, Roger Morris; Did Not Chart; 1981. The “Sweet Jane” inspired “Pretty in Pink” was originally released on the 1981 Psychedelic Furs album “Talk Talk Talk,” then became a title of a John Hughes/Molly Ringwald film in 1986, leading to an inferior version of the song that peaked at #41 on the pop charts. Songwriter Richard Butler, “The song was about a girl who kinda sleeps around, and thinks it’s really cool and thinks everybody really likes her, but they really don’t. She’s just being used. It’s quite scathing.” Music journalist Alex Ogg, described the original recording as “a swirling, exhilarating tale of peer pressure, backbiting and sexual vulnerability.” Richard Butler on the production, “Steve (Lillywhite) brought out the massive wall of sound. It was a fairly large band, after all. He was well known for his huge drum sound. That worked perfectly with five other guys making an absolute racket over the top.”

88. “Right Next Door (Because of Me),” Robert Cray. Songwriter: Robert Cray; #80 pop; 1987. From the book “25 Top Blues Songs,” “Though Stevie Ray Vaughan rightfully receives the lion’s share of the credit for initiating the second ‘blues revival’ in the eighties, blues and soul man Robert Cray deserves acknowledgement, too. His fifth studio album, ‘Strong Persuader,’ went double platinum and pushed his crossover appeal over the top. ‘Right Next Door,’ totally emblematic of his style, is a unique combination of classy rhythm guitar and a succinct solo, with the underlying depth of blues supporting Cray’s favorite lyrical concept, the illicit affair.” What’s most striking about “Right Next Door” is the calculated coldness of the narrator, who breaks up a relationship with his skills of sexual persuasion, then chooses not to comfort the woman afterwards (“I should go to her, but what would I say”). As the Geto Boys would teach us in the early 90s, damn, it feels good to be a gangsta.

87. “It Takes Two,” Rob Base & D.J. E-Z Rock. Songwriter: Robert Ginyard; #36 pop/#17 R&B; 1988. Journalist Christopher Weingarten, “Released in the summer of 1988, ‘It Takes Two’ would have an impact on hip-hop, dance music and pop for decades. Borrowing a giddy snatch of drums and screams from the James Brown-produced 1972 single ‘Think (About It)’ by Lyn Collins, the repeating “yeah … woo” in the 1988 tune remains the single greatest use of a looped drum break in rap history – the hip-hop equivalent the guitar solo in ‘Stairway to Heaven.’” Stephen Thomas Erlewine of AllMusic, “This is party music, pure and simple, but it’s transcendent party music — it sweeps you up immediately, and you’re carried away by the sheer thrill of the bass, beat, and rhymes. It takes a few concentrated listens to realize just how immaculately the record is constructed, and, even then, it’s amazing how easy Rob Base & DJ EZ Rock make it seem.” Rob Base’s noble ambition, “I wanted people to get up and dance and not have to worry about fightin’ and arguing.’”

86. “Bastards of Young,” The Replacements. Songwriter: Paul Westerberg; Did Not Chart; 1985. Replacements biographer Bob Mehr, “’Bastards of Young’ was an epic howl of youthful uncertainty and alienation. Set against a clarion guitar riff, the lyrics were loaded with multiple layers of personal meaning. “Income tax deduction, one hell of a function” pointed to both Westerberg’s fear that the ’Mats’ career could end up as no more than a corporate write-off and his induced New Year’s Eve birth as a tax break for his parents. The song was a residue of Westerberg’s Catholic upbringing, with lyrical allusions to the gospel of Matthew, ruminations on the love of family versus the approval of strangers, and a cynical take on the slippery slope of earthly ambition. Paul’s younger sister, Mary, provided a spark for the lyrics. At eighteen, she’d left Minneapolis to pursue an acting career in the Big Apple. ‘To me, a part of that song is about my sister who felt the need…to be something by going somewhere else,’ said Westerberg. ‘It is sort of the Replacements feeling the same way…not knowing where we fit. It’s our way of reaching a hand out and saying, ‘We are right along with you. We are just as confused.’”

85. “Sex Bomb,” Flipper. Songwriter: Will Shatter; Did Not Chart; 1982. The San Francisco noise rock act Flipper were known for their slow tempos and sludgy sound. While that may not sound like a good time, the sonic insanity of “Sex Bomb” is like a pre-grunge/free jazz version of “Louie Louie.” Music journalist John Dougan, “They were the toast of rock critics across the country with their post-hardcore punk masterpiece ‘Sex Bomb.’ Clocking in at over seven minutes, possessing one riff played over and over (and sloppier and sloppier), with vocalist Will Shatter screaming rather than singing (total lyrics: ‘She’s a sex bomb/My baby/yeah’), it was a remarkable record: loud, proud, defiantly obnoxious, and relentlessly dumb. But in it’s own gleeful and intentionally moronic way it was (and remains) a perfect record.” Greil Marcus compared the song to another rock classic, “’Wild Thing’ boiled down to a burnt pot, unless you count the music: the sounds of bombs, naturally, but also car crashes, planes taking off, trains pulling into a station, D-Day, the 1906 earthquake, old Blue Cheer records played backwards.” Henry Rollins, “They were just heavy. Heavier than you. Heavier than anything.”

84. “A Matter of Time,” Los Lobos. Songwriters: David Hidalgo, Louie Perez; Did Not Chart; 1984. Los Lobos guitarist David Hidalgo, “‘A Matter of Time’ was a big breakthrough. It was a big step, and it helped pave the way.” Music journalist Chris Morris, “The song immediately commanded the listener’s attention. Cast as a dialogue, the hushed number depicts a farewell between a Mexican laborer, leaving to cross the U.S. border in search of possibly illusory work, and his uncertain wife. Painted with focused economy, the song unfolds like a brilliantly brilliantly told short story. For the first time, Los Lobos were writing about the fabric of their own people’s difficult experience, not as any sort of political broadside, but with artfulness, a fine-tuned clarity, and powerful emotional affect. And, like most great songs, it retained its potency over time.”

83. “Downtown Train,” Tom Waits. Songwriter: Tom Waits; Did Not Chart; 1985. Mr. Shining Like A New Dime Tom Waits has been covered by many major artists to include Robert Plant and Alison Krauss (“Trampled Rose”), Norah Jones (“The Long Way Home”), Diana Krall (“Temptation”), the Ramones (“I Don’t Want to Grow Up”), and The Eagles “(Ol’ 55”), but his only appearance on the U.S. pop charts as a songwriter has been with “Downtown Train.” The first (minor) hit version was by Patty Smyth in 1987 (which is worse than you can possible imagine), then Rod Stewart took it Top Five in 1989. Adam Barth of Spin, “From its shimmering electric-guitar lyricism to its perfectly conjured late-night New York imagery, ‘Downtown Train’ is Waits’ most coherent statement of longing. It’s also probably his most straightforward rock song, and one that gives the experimental, bluesy Rain Dogs its head-bobbing anchor. This is a beautifully vulnerable quest for contact that sees Waits’ gravelly yawp at its most affecting.”

82. “It’s My Life,” Talk Talk. Songwriters: Mark Hollis, Tim Friese-Greene; #31 pop; 1981. Blogger Bill Cummings, “Although not achieving the commercial success they deserved at the time Talk Talk produced some quite astounding pop epiphanies throughout the 1980s. ‘It’s My Life’ is one of a handful of their great pop moments, that has perhaps only grown in impact over the intervening years since its release. Turning evocative production into a virtue, each instrumental part and note given a sense of space and breath that was uncommon in an era of glossy pop. Thus ‘It’s My Life’ is built upon a bed of clicking drum machines, snaking baselines and synths that swirl and squawk gradually enveloping the listener. ‘One-half won’t do,’ sings Mark Hollis in the pre-chorus, before the song lets flight into glorious, life affirming crescendos lifted aloft by firing drum machines, warm tumbling synths, while Hollis’s imperious tone shivers with a wistful impregnable power, ripe with existential yearning. Each note gives voice to a quivering vulnerability and a clinging to hope, embodying the contradictions of life’s constant struggle, alone and part of the crowd all at once (‘caught in the trap it never ends’). The existential pop brilliance of ‘It’s My Life’ still sounds timeless, towering and quite frankly marvelous.” A 2003 cover version by No Doubt peaked at #10 on the U.S. pop charts.

81. “The Band Played Waltzing Matilda,” The Pogues. Songwriter: Eric Bogle: Did Not Chart; 1985. Australian songwriter Eric Bogle penned “And the Band Played Waltzing Matilda” in 1971, a critique of glorifying war while noting the brutal personal consequences. Bogle, “I wrote it as an oblique comment on the Vietnam War which was in full swing… but while boys from Australia were dying there, people had hardly any idea where Vietnam was. Gallipoli was a lot closer to the Australian ethos – every school kid knew the story, so I set the song there.” From the Sputnik Music website, “The most obvious comparison to The Pogues version of ‘The Band Played Waltzing Matilda’ is with the 13 minute ending to Highway 61 Revisited, ‘Desolation Row,’ and there’s really no higher praise that can be offered except to say that the comparison is valid. More so than any other song on the album, it’s pretty much entirely carried by MacGowan. While he never had the biggest range, or the best technical voice, in terms of bitter frustration there are few vocal performances better than the 8 minute epic album closer.”