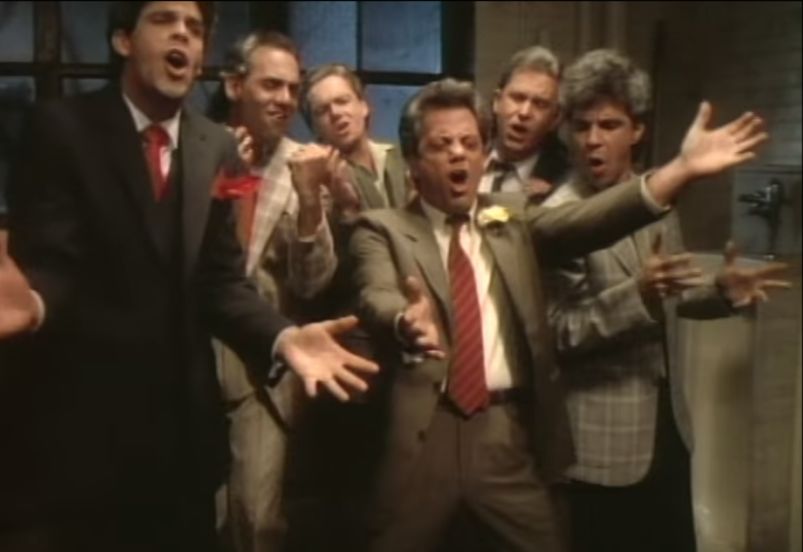 840.  “Small Town,” John Cougar Mellencamp. Songwriter: John Mellencamp; #6 pop; 1986.  Mellencamp, “I wanted to write a song that said, ‘you don’t have to live in New York or Los Angeles to live a full life.’I was never one of those guys that grew up and thought, ‘I need to get out of here.’ It never dawned on me. I just valued having a family and staying close to friends. For some time, my friends and I had been talking about how small towns and the people who lived there were getting screwed economically as America changed. Soon I realized that ‘Small Town’ was more than a phrase of my own frustration. It was a song that felt as though Woody Guthrie had sent it to me from the grave.”

839.  “The Longest Time,” Billy Joel.  Songwriters: Billy Joel; #14 pop; 1984.  The ain’t too pretty/ain’t too proud Billy Joel, “’The Longest Time’ could be a (Joseph) Haydn piece. I was always writing classical music, even the popular songs I wrote. I recognize a lot of them as classical piano pieces, and that’s how I started composing when I was a kid.” Iman Lababedi once graded “The Longest Time” as an “A+” song, commenting that this doo-wop homage reminds him of a former girlfriend.  A song that reminds me of my former girlfriends would be titled “Chastity Belts and Jezebel Drifters.”

838.  “If I Could Be There,” O’Kanes.  Songwriters: Jamie O’Hara, Kieran Kane; Did Not Chart; 1988.  Jamie O’Hara and Kieran Kane met in Nashville during the mid-1980s and as the duo The O’Kanes they scored six consecutive Top Ten country singles from 1986 to 1988, including the #1 hit “Can’t Stop My Heart from Loving You.” The 1988 album track “If I Could Be There” is a slice of bluegrass harmony singing that is reminiscent of The Louvin Brothers era.  The duo’s best material often ended up as b-sides – also check out “This Ain’t Love,” which sounds like the Everly Brothers with unhealthy intentions.

837.  “Everytime You Go Away,” Paul Young. Songwriter: Daryl Hall; #1 pop; 1985.  Neo-soul singer Paul Young, no relation to Neil, was a much bigger star in his native U.K. where he released six Top Ten singles between 1983 and 1985.  “Everytime You Go Away” was a grammatically incorrect 1980 album track from Daryl Hall and John Oates that Young covered for his U.S. signature song.  Daryl Hall, “I never thought of it any other way than the way it was ’til Paul Young did it. I was just doin’ a kind of gospel/soul song; that was all I had in mind for it. I was really surprised to hear the production they did because it kept the elements but commercialized it – made it sound like a pop record.”  Paul Young, “’Everytime You Go Away’ finally put the seal on my worldwide success. It’s my ‘jewel in the crown’ if you like. And it’s so pliable, you can do lots with it.”

836.  “Youth of Eglington,” Black Uhuru. Songwriter: Michael Rose; Did Not Chart; 1981.  The Jamaican reggae band Black Uhuru formed in 1972, but received their broadest recognition during the early 1980s, when Sly Dunbar and Robbie Shakespeare served as their rhythm section and producers.  Jo-Anne Greene from the AllMusic website, “A song aimed beyond just the teens of this Jamaican town, on ‘Youth of Eglington’ Black Uhuru. Michael Rose’s performance is particularly emotive, swinging from strident demand to the depths of despair. Producers Sly & Robbie and their Revolutionaries create a musical backdrop that matches Uhuru’s own, boasting a storming beat and anthemic riffs that scythe across the tracks.” Marshall Bowden of PopMatters, “’Youth of Eglington,’ a militant song, could have been at home on a Clash album with its bouncy bass line overlaid by punchy keyboard and guitar chords.”

835.  “Eighteen Wheels and a Dozen Roses,” Kathy Mattea.  Songwriters: Gene Nelson, Paul Nelson; #1 country; 1988.  West Virginia native Kathy Mattea transitioned from bluegrass to mainstream country during the 1980s, scoring five gold albums from 1987 to 1994.  The long-haul trucker romance number “Eighteen Wheels and a Dozen Roses” was her signature song with a story inspired by a family number of the sibling songwriters Gene and Paul Nelson.  The pot of gold at the end of the retirement rainbow? A Winnebago for exploring that elusive concept known as America.

834.  “Elvis is Everywhere,” Mojo Nixon and Skip Roper. Songwriter: Mojo Nixon; Did Not Chart; 1987.  Mojo Nixon, “There were two things you could do in the small town where I grew up – ride around and get drunk or get drunk and ride around.” Mojo Nixon was the king of low-fi, gonzo psychobilly during the 1980s, not that I can name any competition.  Nixon honors The King of Rock ‘n’ Roll as a ubiquitous deity on “Elvis is Everywhere,” noting that one of the places he can be found is “in your mom!” Additional song titles from Mojo: “Don Henley Must Die,” “Debbie Gibson is Pregnant with My Two Headed Love Child,” “Stuffin’ Martha’s Muffin,” and “Tie My Pecker to My Leg,” which I can assure you is not for the faint of heart.  And, he still hasn’t backed away from his contention that Michael J. Jox is the anti-Elvis.

832.  “Giving It Up for Your Love,” Delbert McClinton. Songwriter: Jerry Williams; #8 pop; 1980.  As a teenager, Delbert McClinton was performing in the rough juke joints on Fort Worth’s infamous Jacksboro Highway, sometimes backing legends like Jimmy Reed and Howlin’ Wolf. He performed harmonica on Bruce Channel’s 1962 #1 pop hit “Hey! Baby!” and penned “Two More Bottles of Wine,” a #1 country hit for Emmylou Harris in 1978.  “Giving It Up for Your Love” was a surprise blues tinged pop hit, penned by Dallas native Jerry Williams who would later write material for Eric Clapton, Bonnie Raitt, and Robert Plant, among others.  McClinton reflecting on his only pop hit, “The radio exposure certainly made it better, but it didn’t turn me into a superstar by any means. I never wanted to be a superstar. That’s the biggest bunch of shit in the world. I know too many people whose lives are a mess because they can’t even go out in public anymore.”

831.  “The Future’s So Bright, I Gotta Wear Shades,” Timbuk3. Songwriter: Pat MacDonald; #19 pop; 1987.  Timbuk3 was comprised of the Madison, Wisconsin husband and wife duo Pat and Barbara McDonald, along with a boombox that served as their pre-recorded rhythm section.  Their sole hit was inspired by Barbara McDonald cheerily remarking one day that, “The future is looking so bright, we’ll have to wear sunglasses.”  While the public heard a lighthearted graduation number, songwriter Pat MacDonald wrote a cynical piece about a nuclear science student who is more worried about his future paycheck than the potential harm of his profession.  Leonard Cohen, “I think ‘The Future’s So Bright, I Gotta Wear Shade’s is the classic 80’s song. As soon as you hear it, you know it’s a real song with real writers. And the use of the word ‘shades’ – I mean, everybody’s been trying to put that word in their songs, because it’s such a resonant word, the harmonics are good. And these guys DID that, and hats off to them.”