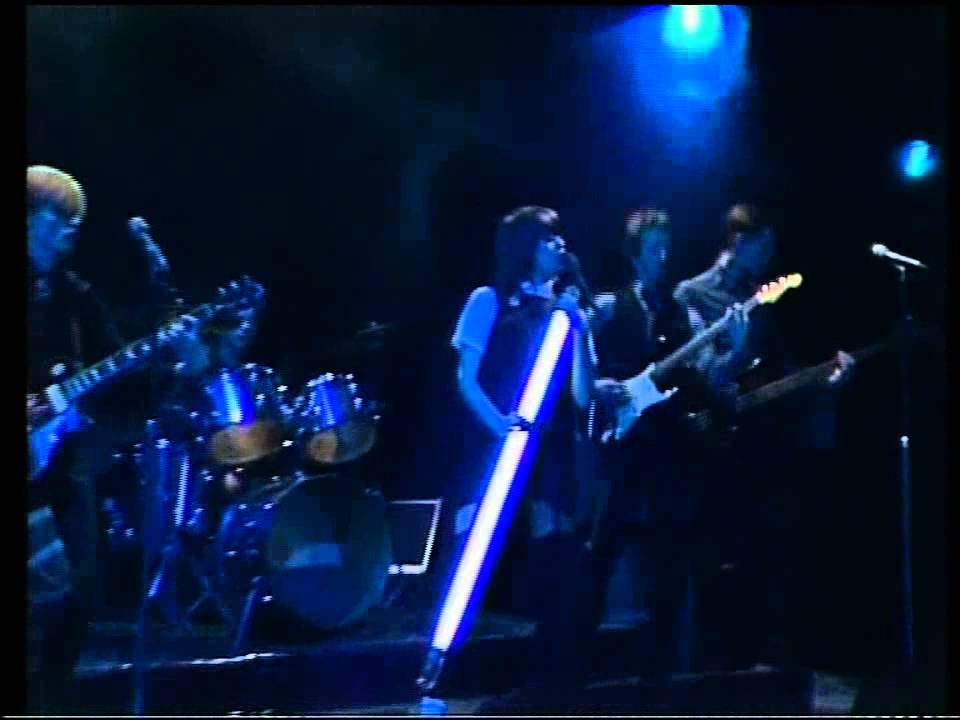 We’re making you rich and you’re already lazy, so just lay on your ass and get richer or write your own songs.

830.  “Boys in Town,” DiVinyls. Songwriters: Christina Amphlett, Mark McEntee; Did Not Chart; 1981. Christina Amphlett didn’t have the confidence as a lead singer that she would develop in the “I Touch Myself” era on the 1981 too much, too young, “Boys in Town,” but she convincingly played the abused slut on this Aussie Top Ten single.  Blogger Paulie Jay, “Hard rocking, manic and melodic – the perfect way to sum up The Divinyls. The (video) image of a 22 year old Christina Amphlett wielding a lit neon tube as she growled, mewled and screamed her way through ‘Boys in Town’ became iconic in the Australian music industry. All other women were pretenders after that (for a few years at least).  Amphlett on her outlook, “Quite early on, I decided I would be a warrior, not a victim.”

829.  “I’m So Excited,” The Pointer Sisters. Songwriters: Trevor Lawrence, Anita Pointer, June Pointer, Ruth Pointer; #9 pop; 1984. The Pointer Sisters, a trio of siblings from Oakland, first hit the pop charts in 1973 with their cover of Lee Dorsey’s “Yes We Can Can” and peaked at #2 in 1978 with the Bruce Spingsteen composition “Fire.” “I’m So Excited” was a high-energy mixture of R&B, dance, and new wave elements that peaked at #30 on the pop charts in 1982.  After the band went Top Five in 1984 with “Automatic” and “Jump (For My Love),” a remixed version of “I’m So Excited” went Top Ten and became the act’s signature song. Rock critic Amy Hanson, “With Anita Pointer handling lead vocals, ‘I’m so Excited’ is a passionate, jangly love song, urgent with little of the dynamics that drove their early, classic R&B. But, still, there is a spark and fire that completely identifies the 80s era sisters with their own alter egos. When they sing ‘I’m about to lose control and I think I like it,’ you’d better believe they mean it.”

828.  “Harden My Heart,” Quarterflash: Songwriter: Marv Ross; #3 pop; 1982.  The Oregon husband and wife team of Marv and Rindy Ross were the creative force behind the 1980’s pop band Quarterflash, who originally released the single “Harden My Heart” under the name Seafood Mama. Lead singer Rindy Ross performed both the vocals and the saxophone solo, once noting that she was never comfortable just shaking a tambourine onstage.  This testimony to achy resolve felt perfectly comfortable on FM radio between Steely Dan and Pat Benatar.  Rindy Ross in 2014, “I still love playing ‘Harden my Heart’ because people light up and if they have been sitting, all of a sudden they’re standing up moving and dancing. What’s not to like about that?”

827.  “Write You Own Songs,” Willie Nelson. Songwriter: Willie Nelson; Did Not Chart; 1984.  Journalist Joseph Hudak, “With just a traditional country beat and three-plus minutes, the ever-defiant Nelson offered the ultimate ‘fuck you’ to the Nashville suits. Originally recorded as a duet with Waylon Jennings for the 1982 collaboration album ‘WWII,’ Nelson cut his own version for the soundtrack to his 1984 film ‘Songwriter.’ Both pack the same slap-in-the-face wallop, however, with Nelson singing directly to ‘Mr. Music Executive’ and his ilk, beseeching them to mind their own damn business and let the artists do their job. At one point, Nelson even asks, ‘Is your head up your ass so far that you can’t pull it out?’ Music Row, you got owned.”

825.  “Take on Me,” A-ha.  Songwriters: Magne Furuholmen, Morten Harket, Paul Waaktaar; #1 pop; 1985. The photogenic Norwegian act A-ha had a revolutionary video that springboarded their synthpop hit to #1 in the U.S.  Madison Vain of Entertainment Weekly, “The group teamed up with director Steve Barron, who helmed Michael Jackson’s ‘Billie Jean,’ for a short-form piece that mixed live action with rotoscoping illustration—never before used in a music video. Illustrator Mike Patterson came up with more than 3,000 sketches for the final clip. Bandmember Paul Waaktaar-Savoy, “It was a dream to work with talent like that. Normally, videos took a week of shooting in a hangar. But for this, we did a whole day that was only to make the comic magazine. Then four months spent doing hand-drawn drawings. It was very thorough stuff.” Morten Harket on the unfathomable falsetto notes in the chorus, “Paul had the idea of really using my vocal range in the chorus, having notes rising in octaves like Strauss’s ‘Also Sprach Zarathustra.’ As for hitting that last high note, you either have wings or you don’t – the voice is not in the throat, it’s in the blood. It’s what you envisage, what you believe. People think the chorus is the hard part in ‘Take on Me,’ but they’re wrong. The hard part was making the verses bounce.”

824.  “A Forest,” The Cure. Songwriters: Simon Gallup, Robert Smith, Matthieu Hartley, Lol Tolhurst; Did Not Chart; 1980. Professional lipstick smearer Robert Smith, “With ‘A Forest’ I wanted to do something that was really atmospheric, and it has a fantastic sound. (Record executive) Chris Parry said, ‘If you make this sound radio friendly, you’ve got a big hit on your hands.’ I said, ‘But this is how it sounds. It’s the sound I’ve got in my head. It doesn’t matter about whether it’s radio friendly.’ He sometimes thinks that I’m willfully kind of stopping this from having more success, but I’m not. One of the reasons people like the band is because they’re never quite sure what’s gonna happen next. If we were predictable, we wouldn’t have really lasted this long.”

823.  “How Ya Like Me Now,” Kool Moe Dee. Songwriter: Mohandas Dewese; #22 R&B; 1987.  Harlem native Mohandas Dewese (Kool Moe Dee) first made his mark in rap music as a member of the pioneering hip hop group The Treacherous Three.  He started his solo career in 1986 and went platinum with the 1987 album “How Ya Like Me Now,” a title that became a pop culture catch phrase.  Lyrically, Kool Moe Dee was taking aim at LL Cool J, who he felt wasn’t showing the proper respect to first generation rappers or had some other manufactured beef against.  Producer Teddy Riley, “That record was so big. I felt like I was a part of history in the making.  With ‘How Ya Like Me Now’ everything changed. This is when our record company (Jive/RCA) started really backing our music. I got signed to Zomba publishing and I was living in London for about six or seven months working on Moe Dee’s album and with other rappers. Between me and Marley Marl we were the first to sample James Brown and really get away with it. The sample clearance laws were not in effect yet. I was even making James Brown sounds with my own voice [laughs]. That’s me saying, ‘Get on up!’ But James Brown and his team started to put a trademark on everything. Everything was changing. Hip-hop was changing.”

822.  “Happy Hour,” The Housemartins.  Songwriters: Paul Heaton, Stan Cullimore; Did Not Chart; 1986.  Blogger Houston Roby, “Emerging in the mid-80’s in the UK, at a time when the synth-pop of Wham! and Madonna (and nearly everyone else) still dominated the charts, The Housemartins emphasized acoustic guitars, piano, and drums, as well as tastefully clean electrics. They called their sound ‘garage gospel,’ which basically translates to a mash-up of jangly 1965-era Beatles and swinging Motown basslines. The band’s jaunty music often obscured lyrics skewering everyone and everything, but particularly those in power: politicians, royalty, the wealthy, your boss.” The Housemartins peaked at #3 on the U.K. pop charts with this upbeat tune with lyrics about endemic sexism in British corporate environments.  Lead singer Paul Heaton, “I think melody is ten times more important than lyrics. So, I’ve always written either political or unusual lyrics and wanted to mix them with tunes.”

821.  “I Know There’s Something Going On,” Frida. Songwriter: Russ Ballard; #13 pop; 1983. British songwriter Russ Ballard’s resume includes time as a member of Argent, to include writing “God Gave Rock and Roll to You,” as well as writing Three Dog Night’s “Liar,” Ace Frehley’s “New York Groove,” Santana’s “Winning,” America’s “You Can Do Magic,” and the 1983 hit “I Know There’s Something Going On” by Frida.  Frida (real name – Anni-Frid Lyngstad), best known as a member of ABBA, had a major international hit with this Phil Collins produced drum heavy single.  In 2015 author Tom Breihan called the song, “A towering disco-rock banger…and it still stands as a glorious example of early ‘80s studio craft.” Phil Collins remembering the era, “Frida and I had something in common as far as our divorces were concerned. We were both the injured party.”