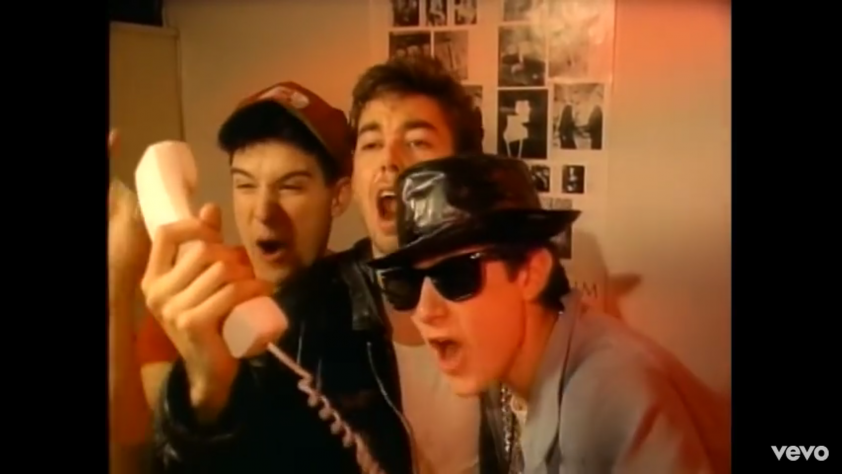 800.  “Damn Your Eyes,” Etta James. Songwriters: Steve Bogard, Barbara Wyrick; Did Not Chart; 1988. Sadly, Etta James was largely inactive during the 1980s, releasing two albums with an eight break in recording.  Rock critic James Hunter called the 1988 “Seven Year Itch” album, “Powerful R&B without many concessions to music after, say, Al Green’s Seventies hits.” “Damn Your Eyes” is a slow burn number about an unhealthy attraction to a bad man that was later covered by Sinead O’Connor and Bettye LaVette, among others.  Bonnie Raitt, “Like Ray Charles, Etta brought the passion of gospel, R&B and gutbucket raw soul music into the mainstream in a way that very few people have ever crossed over.”

799.  “18 Miles to Memphis,” Stray Cats. Songwriter: Brian Setzer; Did Not Chart; 1983. Brian Setzer, “With the Stray Cats, we really took the (traditional rockabilly) music somewhere else. First of all, we wrote our own songs that were good songs. That’s a real weak point in modern classics if you do rockabilly or blues. We weren’t afraid to mix some crazy styles into the standard rockabilly look. We also took a lot of different musical influences that were part of that era. We had a little punk edge to us – we were full of piss and vinegar. So, we kind of had all the ingredients there.”  The Dave Edmunds produced 1983 album “Rant ‘N Rave With The Stray Cats,” included the band’s last major hit, the #5 single “(She’s) Sexy + 17.” That album’s Sun Records influenced “18 Miles to Memphis” reflects the upbeat, country style of rockabilly and Setzer adds two flashy solos, the second of which is on steel guitar.

798.  “(You Gotta) Fight for Your Right (to Party!),” Beastie Boys.  Songwriters: Adam Yauch, Michael Diamond, Adam Horovitz, Rick Rubin, Tom Cushman; #7 pop; 1987.  The Beastie Boys have pretty much disowned “(You Gotta) Fight for Your Right (to Party!),” a song they labelled “practically a throwaway” and one they never played after their first headlining tour.  Daniel Cook of NPR, “’(You Gotta) Fight for Your Right (To Party!)”’— an unlikely fusion of jock-rock, hair metal and golden-age party rap — helped make Beastie Boys’ ‘Licensed to Ill’ the first hip-hop album to reach No. 1 in the U.S., not to mention the bestselling rap album of the ’80s.” Despite the band’s misgivings, this is fun satire and their entire first album confused listeners who really believed that these hardcore music nerds were gun wielding menaces to society.  In the “my how times have changed” dept. – the working title of the “Licensed to Ill” album was “Don’t Be a Faggot.”

797.  “Hawks and Doves,” Neil Young.  Songwriter: Neil Young; Did Not Chart; 1980.  Neil Young began his confusing run during the 1980s with the “Hawks and Doves” album, including a title track that’s a clanging country, flag waving stomper.  (Young would voice his frustration about President Carter and the Iranian hostage situation to reporters during this timeframe; he also made pro-Reagan comments during the early 1980s, which Young would later backtrack on, noting his contrarian personality).  Young biographer James McDonough, “This was the first glimpse of yet another side to Young’s persona: hard-nosed redneck.”  Young would make another foray into country music with his 1985 “Old Ways” album, which yielded the #33 C&W hit “Get Back to the Country.”

796.  “My Feet Can’t Fail Me Now,” The Dirty Dozen Brass Band. Songwriters: The Dirty Dozen Brass Band; Did Not Chart; 1984. The Dirty Dozen Brass Band evolved from a New Orleans’ church youth program and developed a mission to maintain and transform that city’s brass band tradition. “My Feet Can’t Fail Me Now” was the title track to their 1984 debut album and clearly demonstrates their new traditionalist approach, showing respect to a genre while simultaneously reinventing it.  Journalist Stuart Nicholson, “By incorporating a wide range of influences from Thelonious Monk, Charlie Parker, James Brown and Duke Ellington to hip-hop and unexpected themes  like the Hanna-Barbera cartoon series ‘The Flintstones,’ they turned the New Orleans marching band tradition on its head.  Initially there was considerable resistance to what they were doing – ‘You can’t mix Charlie Parker with traditional New Orleans music,’ ‘You’re playing too fast for a marching band’ and, most common of all, ‘You’re ruining the old music’ – but the Dirty Dozen were not listening to the naysayers.”

795.  “Stranger in the House.” Elvis Costello. Songwriter: Elvis Costello; Did Not Chart; 1980.  After his punkish beginnings, it was somewhat bewildering to hear Elvis Costello penning and performing a country song about a man who lost his identity after losing his love.  Costello had recorded the song for a John Peel session in 1978 and with George Jones in 1979, before including it on his 1980 “Taking Liberties” album.  Costello on his good taste, “George Jones was my guiding light whenever I wrote in the country idiom.” In addition to releasing the 1981 country album “Almost Blue” album, Costello later had songs covered by Johnny Cash (1987’s “The Big Light”) and Rosanne Cash (1995’s “Our Little Angel”), as well as co-writing with T-Bone Burnett the 2003 Alison Krauss soundtrack number  “The Scarlet Tide.”

794.  “Standing on the Edge,” Cheap Trick. Songwriters: Rick Nielsen, Robin Zander, Mark Radice; Did Not Chart; 1985.  A blunt assessment from Bun E. Carlos on Cheap Trick’s albums during the mid-1980s, “The production in the 80’s, the drums got really gimmicky, and we weren’t getting along great with the record company. Jon (Brant) was playing bass, so that made Cheap Trick not sound like they used to, as much. And, they aren’t great records.” Nonetheless, “Standing on the Edge” is a wonderful sci-fi rocker about a sexual encounter with a ten-foot-tall alien.  The orally skilled, legendary Little Rock groupie sweet, sweet Connie Hamzy also received a shout out.

793.  “Frank’s Wild Years,” Tom Waits. Songwriter: Tom Waits; Did Not Chart; 1983.  “Well, Frank settled down in the Valley and he hung his wild years on a nail that he drove through his wife’s forehead.” “Frank’s Wild Years” is the type of open night beatnik poetry that you hear in your hippest bohemian dreams.  Waits on his protagonist, “Charles Bukowski had a story that essentially was saying that it’s the little things that drive men mad. It’s not the big things. It’s not World War II. It’s the broken shoe lace when there is no time left that sends men completely out their minds. So this is kind of in that spirit… I think there is a little bit of Frank in everybody.”

792.  “Pour Some Sugar on Me,” Def Leppard. Songwriters: Steve Clark, Phil Collen, Joe Elliott, Robert John “Mutt” Lange, Rick Savage; #2 pop; 1988.  This piece of bubblegum pop meets cock rock helped push Def Leppard’s “Hysteria” album to sales over 25 million worldwide. Jeff Giles from the Ultimate Classic Rock website, “A smash hit in 1988, ‘Pour Some Sugar on Me’ was a last-minute addition to the landmark 1987 ‘Hysteria’ album. By the time it was released as the record’s third single, sales had seemingly peaked around triple platinum — not bad, but not enough to offset the many years it took to finish ‘Hysteria.’ ‘The song became a hit because strippers in Florida started requesting it on the local radio station,’ Def Leppard guitarist Phil Collen said. ‘It had a second lease of life. ‘Hysteria’ was all over bar the shouting, and then all of a sudden this song just got popular, and then the album went to No. 1. It’s really funny how it suddenly became cool because it was a stripping song.’”

791.  “I Keep Forgettin’ (Every Time You’re Near),” Michael McDonald. Songwriters: Michael McDonald, Ed Sanford, Jerry Leiber, Mike Stoller; #4 pop/#7 R&B; 1982. Rock critic Stephen Holden in 1982, “Mr. McDonald’s richly soulful tenor style with its run-on phrasing, intensely throaty timbre, and imploring emotionality, has also influenced a whole generation of male pop balladeers. Christopher Cross, Kenny Loggins, George Benson, Luther Vandross, and James Ingram have all been touched by Mr. McDonald. Mr. McDonald’s every phrase conveys an ardent, hopeful romanticism. His singing almost totally eschews the aggressive braggadocio of today’s male rock singers to express an achingly sweet vulnerability.”  The blue-eyed soul hit “I Keep Forgettin’” may be best known today as the foundation of the 1994 Warren G/Nate Dogg hit “Regulate.” McDonald on the recycling of his music, “I remember thinking, gosh, you know, if I had walked into Warner Brothers with one of Sting’s songs that I had re-written a lyric to and sat down with the A&R guys and went, ‘Hey, here’s my new record,’ they might have looked at me like I was nuts. It kind of irked me at the time but now I’ve come to accept it.”