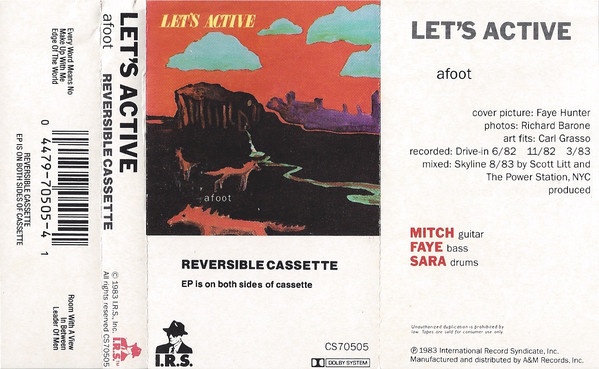 If your heart is a flame burning brightly, you’ll have light and you’ll never be cold.

If your heart is a flame burning brightly, you’ll have light and you’ll never be cold.

680. “Looking for Lewis and Clark,” The Long Ryders. Songwriter: Sid Griffin; Did Not Chart; 1985. The Los Angeles rock band The Long Ryders were incongruously placed in that city’s psychedelic nostalgia Paisley Underground scene during the 1980s. Like Jason and the Scorchers, The Long Ryders were pioneers in bringing traditional country sounds into an undeniable rock ‘n’ roll context. “Looking for Lewis and Clark” reworks the riff from “You Really Got Me” by the Kinks, while decrying the difference between the ideals of America and the reality of a nation ruled by political graft. In a fun, rocking way, of course.

679. “In Between,” Let’s Active. Songwriter: Mitch Easter; Did Not Chart; 1983. Mitch Easter once joked that he was the “Dr. Dre of Jangle” and his band captured that manic pop thrill on the ‘60s influenced romantic confusion number “In Between.” Bassist Faye Hunter, “Initially, it was like magic. The energy was palpable, and we shared bills with friends of ours: the Bongos, the dB’s, R.E.M., the Replacements, the Fleshtones. As is the case in many bands, over time there were problems and other things in life that broke that initial bond, but at first, we were all pretty thrilled.”

678. “Romeo’s Tune,” Steve Forbert. Songwriter: Steve Forbert; #11 pop; released in 1979, peaked on charts in 1980. Mississippi born singer/songwriter Steve Forbert had his only pop hit with the Shakespeare referencing “Romeo’s Tune,” although he would later have writing credits on two minor Marty Stuart country singles from 1986 (“All Because of You,” a #39 hit and “Honky Tonker,” which peaked at #59). Rock critic Stewart Mason on this sweeping romantic number, “’Romeo’s Tune’ is a delightful piece of late-’70s soft rock that sounds more like a slightly folkier Fleetwood Mac. Based on a lovely rolling piano riff that brings to mind some of Steve Nieve’s more lyrical work with Elvis Costello and the Attractions (think ‘Oliver’s Army’), with Forbert’s own guitar pushed well back in the mix but his intimate, slightly hoarse vocals front and center.” Despite his one hit wonder status, Forbert has forged a long club level circuit career and received a Grammy nomination in the early 2000s for his Jimmie Rodgers tribute album “Any Old Time.”

677. “For Those About to Rock, We Salute You,” AC/DC. Songwriters: Angus Young, Malcolm Young, Brian Johnson; Did Not Chart; 1981. The title track from AC/DC’s 1981 album came from a Latin phrase that is approximately 2,000 years old. Attributed to both Roman prisoners and gladiators, the translation of “Ave, Imperator, morituri te salutant” is “Hail Caesar, we who are about to die, salute you.” After developing the song, the band was inspired to add cannons after hearing them at the wedding of Prince Charles and Princess Diana. Angus Young, “I just wanted something strong, something masculine, and rock ’n’ roll. And what’s more masculine than a cannon, you know?”

676. “Summer Of ’69,” Bryan Adams. Songwriters: Bryan Adams, Jim Vallance; #5; 1985. Johnny Cougar couldn’t completely lay claim to the teenage heartland nostalgia market during the 1980s with Canadian Bryan Adams cutting like (har har) a knife through the pop charts at the same time. Adams, “It’s a very simple song about looking back on the summertime and making love. For me, the ’69 was a metaphor for making love not about the year. I had someone in Spain ask me once why I wrote the first line ‘I had my first real sex dream’… I had to laugh.” Adams made some of the whitest pop music of the 1980s. In that sense, he’s like an imported Kenny Loggins.

675. “More Than This,” Roxy Music. Songwriter: Bryan Ferry; Did Not Chart; 1982. The lush, breezy “More Than This” was the ninth and final Top Ten U.K. single for Roxy Music, a band whose only U.S. Top 40 hit was 1975’s “Love is the Drug.” Bill Janovitz from the AllMusic website, “The melody is undeniably gorgeous, and Ferry has always been a compelling singer with a distinctive voice; he sounded unlike anyone else on the radio at the time, his voice more reminiscent of old-time jazz-age singers and post-war tenors like Bill Kenny of the Ink Spots and Tony Williams of the Platters. Indeed, the romantic and flighty tune reminds one of old torch songs. And it is unquestionably a love song, albeit one with an air of Zen appreciation for life’s impermanence.”

674. “Children’s Story,” Slick Rick. Songwriter: Slick Rick; #5 R&B; 1988. London born/New York based rapper Slick Rick (Richard Walters) first received critical attention as part of Doug E. Fresh’s crew, performing on “The Show” and “La Di Da Di.” Author Craig Jenkins named “Children’s Story” as “the best storytelling rap song of all time.” Jenkins, “A petty stick-up job quickly goes sour when the victim turns out to be an undercover cop, which sets off a Mouse Trap-like chain of events that lands him dead in the streets at the age of seventeen. ‘Children’s Story’ has been sampled and covered scores of times.” Slick Rick turned “Children’s Story” into a children’s book for Record Store Day in 2017. Record executive Bill Adler, “It was pioneering because he was so writerly, I call it rap lit. Ricky was conscious early on about the possibilities of rap.”

673. “Clubland,” Elvis Costello and the Attractions. Songwriter: Elvis Costello; Did Not Chart; 1981. Elvis Costello looks at the underbelly of nightlife on “Clubland,” the lead track to his 1981 “Trust” album. Jim Beviglia of American Songwriter, ‘Clubland’ is a chronicle of what happens when reckless behavior is introduced into an already toxic environment. On the surface, everything is fine in this realm, what with the ‘boys next door’ and ‘mums and dads’ joining in the benign fun. But the punchline to the refrain explains what those innocents have in store for them: ‘Have you ever been had in Clubland?’ Costello uses the club scene as a metaphor for any place, physical or figurative, which seems alluring but doesn’t deliver on its promises and turns out to do more harm than good.”

672. “Church of the Poison Mind,” Culture Club. Songwriters: Roy Hay, Boy George, Mikey Craig, Jon Moss; #10 pop; 1983. Rock critic Gary Graff’s blurb on “Church of the Poison Mind,” which he named the best Culture Club song in a Billboard piece, “Fabulous as ‘Do You Really Want to Hurt Me’ is, this is Culture Club’s at its upbeat, Motown-saluting best, a poppy barn-burner that has more cajones than anything else in the group’s catalog. Helen Terry’s muscular backing vocals offer a welcome counterpoint to George’s feathery leads, while the rest of the band shows that it can kick into a higher gear when the occasion calls for it.” In the 1960s, British rock bands updated American blues music and sold it to U.S. teenagers. During the 1980s, George Michael and Boy George recycled Motown, packaged it in sexual ambiguity, and sold it to U.S. teenagers.

671. “Flexible Flyer,” Hüsker Dü . Songwriter: Grant Hart; Did Not Chart; 1985. Grant Hart somehow managed to generate a warmhearted hippie vibe while playing aggressive punk music. Music journalist Briony Edwards, “As their brotherly rivalry threatened to tip over into something more sinister, Grant Hart and Bob Mould’s songwriting styles flourished as they competed to outdo one another track by track. While it ultimately wrecked their relationship, ‘Flip Your Wig’ is the album that really bore the fruits of this conflict – and is considered by Mould to be the band’s best. Hart’s wistful, melancholic brooding on this track marks it as one of album’s stand outs.” “Flexible Flyer” is the emotional equivalent of a cup of hot chocolate and a blazing fireplace on a cold winter day.