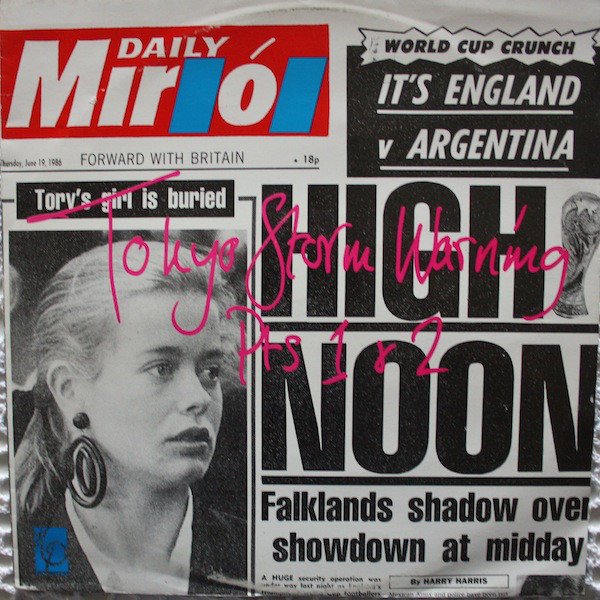 They wear hoods and carry shotguns in the main streets of Montgomery.

620.  “Tokyo Storm Warning,” Elvis Costello and the Attractions.  Songwriter: Elvis Costello; Did Not Chart; 1986.  John Borash of Goldmine on Costello’s self-described “travelogue…about claustrophobia,” “Certainly one of the most unique songs in Costello’s catalog: it’s a long (6:21), winding, almost Dylanesque stream-of-consciousness tune that happens to rock like mad. Leading off with Pete Thomas’s pounding tom-toms and running through such obscure lyrical touchstones as dead Italian tourists’ bodies, a waitress named Teresa now known as Juanita, and ‘Japanese Jesus robots telling teenage fortunes,’ it’s not unlike the musical equivalent of a crazy funhouse ride. As a bonus, said funhouse ride includes a nice little Costello guitar solo that sounds like it leapt straight off the Beatles’ Revolver. Why a song this…well, this strange…was released as a single remains a relative mystery, but it did manage to scrape its way to number 73 on the UK charts.”

619.  “Sign o’ the Times,” Prince. Songwriter: Prince; #3 pop/#1 R&B; 1987. Kenneth Partridge of Billboard on the title track to Prince’s landmark 1987 double album, “With little more than a stiff robo-funk beat and some bluesy guitar licks, Prince does ‘What’s Going On’ for 1987. As he tackles AIDS, gangs, drugs, natural disasters, and even the Challenger explosion, Prince plays it cool and detached. ‘Sign O’ the Times’ is a status update, not a call to action. His solution isn’t marching in the streets or phoning your congressman. ‘Hurry, before it’s too late,’ he sings, echoing the carpe diem message of ‘1999’ and ‘Let’s Go Crazy.’ ‘Let’s fall in love, get married, have a baby.’”

618.  “The Acid Song,” Loudon Wainwright III. Songwriter: Loudon Wainwright III; Did Not Chart; 1986.  “Boy I’m really glad you talked me into doing this…/Really having a ball/Yeah, yeah I know, I know, I know that my hair’s on fire/Your face is melting, did you know that?/I don’t know where the Ravi Shankar tape is.” Loudon Wainwright discovered you can’t go home again on the humorous bad trip story number “The Acid Song.”  Wainwright on his lighter material, “When something is funny to you, you can’t resist it. You can’t metaphorically cross your arms, so to speak, and block it out. It disarms you. So, yeah, humor is powerful. My foremost influence in musical social commentary was not Mr. Dylan or Phil Ochs, but Tom Lehrer. His songs were terrifically funny and also thoughtful and great, and he’s a hero of mine.”  Wainwright on crossing the generational divide, “The young folks love ‘The Acid Song.’ It’s become an anthem of sorts.”

617.  “Just a Touch of Love,” Slave.  Songwriters: Danny Webster, Mark Adams, Mark Hicks, Raye Turner, Starlena Young, Steve Arrington; #9 R&B; 1980.  The Ohio funk band Slave formed in 1975 and had their biggest success two years later with the #1 R&B hit “Slide.”  Percussionist Steve Arrington on becoming Slave’s lead vocalist, “One day we did the track for ‘Just a Touch of Love’ and one of the guys was supposed to sing the lead. He disappeared for about two weeks, so (producer) Jimmy Douglass told all of us to take a turn (at singing). I sang, but I didn’t have any words yet. Douglass said, ‘Stop! We’ll give you a tape. Take what you just did, go to the hotel, come up some words and come back tomorrow and record.’ I was just doing whatever came to my head and (the band) thought it was dope.”  As with any effective funk song, give a touch of love to the bassist, in this case Mark Adams who passed away in 2011.

615.  “Fools Gold,” The Stone Roses.  Songwriters: Ian Brown, John Squire; Did Not Chart; 1989.  The Stone Roses replicated the beat of James Brown’s “The Funky Drummer” for their breakthrough Top Ten U.K. hit.  The song was an early form of the “Madchester” sound, a genre formed by Manchester, England bands who merged psychedelic rock with dance beats.  Music journalist Robert Webb, “’Fools Gold’ lolloped out of the backend of the Eighties with a loose-limbed strut and an attitude to match. Singer Ian Brown almost whispers his cryptic blank verse which, he claimed, was inspired by the Humphrey Bogart movie ‘The Treasure of the Sierra Madre.’ ‘Three geezers who are skint and they put their money together to get equipment to go looking for gold,’ he said. ‘Then they all betray each other… That’s what the song is about.’”  Really, he could be singing about nomadic unicorns, that beat is all that matters.

614.  “Reward,” The Teardrop Explodes.  Songwriters: Julian Cope, Alan Gill; Did Not Chart; 1981. Julian Cope, “I think we’re very poppy. To me pop is something you hum. What I’m trying to do is strike a balance between triteness and greatness. People nowadays seem too embarrassed to show emotion, which is what I want.” The Teardrop Explodes formed as a neo-psychedelic band in Liverpool in 1978 and hit the U.K. Top Ten singles chart three years later with the retro soul horn sound of “Reward.”  The song was built around Alan Gill’s bassline and was recorded twice to achieve a driving Northern soul sound.  Cope describing his mental state at the time, “I became the acid king – I would ride imaginary horses to the studio.”

613.  “World Shut Your Mouth,” Julian Cope.  Songwriter: Julian Cope; #84; 1986. After departing The Teardrop Explodes, Julian Cope released a 1984 album titled “World Shut Your Mouth,” which does not include this song, his biggest international hit.  This single was included on the 1987 album “Saint Julian,” which was a move away from psychedelic sounds toward modern rock music.  Author John Lewis, “Cope’s template was Alice Cooper’s early singles, and you can certainly hear that snotty, longhaired garage rock sound. Cope described ‘World Shut Your Mouth,’ with its Motown drumbeat and anthemic chorus, as somewhere between ‘Hang on Sloopy’ and ‘I Love Rock ‘N’ Roll.’” Cope on his life’s work, “To rally every black sheep is my goal.”

612.  “Take Your Time (Do It Right),” The S.O.S. Band. Songwriters: Harold Clayton, Sigidi; #3 pop/#1 R&B; 1980.  The S.O.S. Band was an Atlanta R&B act that mixed soul, disco, funk, and synth pop.  They pushed all the right buttons for pop and soul airplay with “Take Your Time (Do It Right).” Singer Mary Davis on producer Sigidi Abdullah, “He liked perfection: he liked everything to be just right. We stayed in the studio all night with those vocals on ‘Take Your Time.’’ I took my pillow and my blanket.”  The S.O.S. Band floundered for a few years after this hit, then teamed with producers Jimmy Jam and Terry Lewis for the mid-1980s Top Ten R&B hits “Just Be Good to Me,” “Tell Me You Still Care,” and “Just the Way You Like It.”

611.  “Doin’ Our Own Dang,” Jungle Brothers.  Songwriters; De La Soul, the Jungle Brothers, Q-Tip, and Monie Love; Did Not Chart; 1989.  The Jungle Brothers were from the De La Soul schoo of hip hop that involved artfully placing samples to build a unique multi-genre influenced brand versus building raps around obvious pop hooks.  Clayton Purdom of the A.V. Club website, “Everyone involved sounds utterly enthralled by the possibilities of their young movement. Q-Tip starts his verse enunciating every word in ‘A tree is growing,’ secure in the knowledge, even then, that what the Jungle Brothers planted would stand for decades.”Greg Tate on their 1989 “Done by the Forces of Nature” album,” “a nonstop groove-a-think where sexist spectacle commingles with love paeans to the sistuhs, where safaris into Afro-centricity are made to house you.”