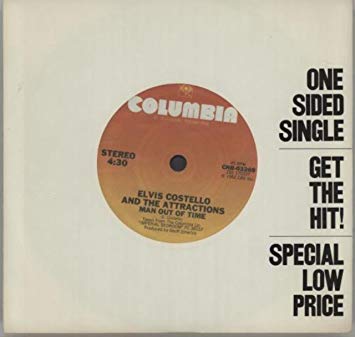 Why am I so soft in the middle? The rest of my life is so hard.

500.  “Living After Midnight,” Judas Priest. Songwriters: Rob Halford, K.K. Downing, Glenn Tipton; Did Not Chart; 1980.  The U.K. heavy metal band Judas Priest released their debut album in 1974 and slowly built a following in America, finally breaking platinum status with the 1980 “British Steel” album.  The singles “Living After Midnight” and “Breaking the Law” were pop hits in the U.K., both peaking at #12, but were relegated to album radio tracks in the U.S. Music journalist Dave Swanson, “’Livin After Midnight,’ with its simple, almost Kinks-like riff, was a perfect melding of metal and pop, in the best sense of both worlds. In just over three minutes, Priest packed all the power of their metallic sound into a simple, direct pop track. Leaving behind earlier, more complicated songwriting, the band turned in a riff, melody and driving beat that was irresistible to rock radio.” Rob Halford, “Glenn (Tipton) was clanging out the chords to ‘Living After Midnight’ at 4 o’clock in the morning. He woke me up, I came downstairs, and said, ‘Glenn, it seems like you’re living after midnight down here.’ And he said, ‘That’s a great title for this song!’”

499.  “A Lesson in Leavin’,” Dottie West. Songwriters: Randy Goodrum, Brent Maher; #73 pop/#1 country; 1980. Tennessee native Dottie West spent most of the 1950s performing on local radio and television programs, then moved to Nashville in 1961.  She co-wrote the 1963 #3 country hit “Is This Me?” for Jim Reeves and won a Grammy award with her 1964 #10 hit “Here Comes My Baby.”  West frequently had success as a duet partner, going Top Ten collaborating with Jim Reeves, Don Gibson, and having several major hits with Kenny Rogers in the late 1970s/early 1980s.  West became more provocative as she aged, posing for “Oui” when she was pushing 50 and developing a taste for spandex stage outfits.  “A Lesson in Leavin’” was written by Arkansas native/MOR specialist Randy Goodrum with frequent collaborator Brent Maher.  This country disco number was West’s first #1 single as a solo artist and was a crossover pop hit for Jo Dee Messina in 1999.  During the early 1980s, Dottie’s daughter Shelly West was also a major country star, often singing hit duets with David Frizzell, the younger brother of Lefty Frizzell.  Dottie’s chart success waned in the mid-1980s and she passed away in 1991 after suffering injuries in a car accident.

498.  “You Can Call Me Al,” Paul Simon.  Songwriter: Paul Simon; #23 pop; 1987. French composer Pierre Boulez had a celebrated career, working in avant-garde music then later being a conductor for the New York Philharmonic and the BBC Symphony Orchestra.  Paul Simon once met him socially.  Simon biographer Marc Eliot, “Paul likely got the title (for ‘You Can Call Me Al’) from something he overheard at a party he hosted, where he met the conductor and composer Pierre Boulez for the first time. As he was leaving, Boulez called Simon ‘Al,’ and the humor of the situation stuck with him.”  Boulez also reportedly referred to Simon’s then wife Peggy as “Betty.”  “You Can Call Me Al” was Simon’s first solo Top 40 single since 1980’s “Late in the Evening” and helped launch his African pop inspired “Graceland” album into multi-platinum status.

497. “I Can’t Wait,” Nu Shooz. Songwriter: John Smith; #3 pop; 1986. The Portland pop band Nu Shooz released “I Can’t Wait” in 1985 and scored a regional hit, but couldn’t draw major label interest.  Dutch producer Peter Slaghuis remixed the song and his import version drew attention from Atlantic Records, leading to an album deal and a #3 pop hit.  John Leland of “Spin,” “You can listen to this record as many times as you want and still not have any strong impressions that human beings actually made it. In other words, it’s the perfect disco record.” Music journalist Matthew Singer, “Even in its original form, ‘I Can’t Wait’ is the platonic ideal of a classic ’80s song: timeless in its blend of fat-bottom funk and R&B elegance, but with just enough retro-futurist kitsch to immediately evoke the era.”

496.  “Nothin’ But a Good Time,” Poison.  Songwriters: Bret Michaels, C.C. DeVille, Bobby Dall, Rikki Rockett; #6 pop; 1989. Rolling Stone on this blue-collar, party anthem, “The entire ethos of the hair-metal movement is summed up by the title of this song: ‘Nothin’ But a Good Time.’ These bands weren’t fighting against apartheid or confessing their deepest secrets. They just wanted to churn out tunes about fast women, hard drinking and good times, essentially creating a fantasy world of debauchery without consequences for their listeners.” Author Chuck Klosterman, “In ‘This Is Spinal Tap,’ Nigel Tufnel momentarily confuses the words ‘sexy’ and ‘sexist,’ oblivious to the fact that the two words so similar in spelling could have totally different meanings. Amazingly, Poison seemed to perceive those words in the same way – but it worked! It’s not just that rock chicks weren’t offended by the sexist nature of Poison’s music; they were actually turned on by it.  In the eyes of hard-rockin’ female teens, Bret Michaels was the kind of guy who would take you to a keg party on the back of his motorcycle and act real macho around his friends – but you knew he wasn’t going to get drunk and punch anybody.”

495.  “Here Comes Your Man,” The Pixies. Songwriter: Black Francis; Did Not Chart; 1989.  Rolling Stone, “Black Francis wrote ‘Here Comes Your Man’ when he was just 15, but when he finally recorded it with the Pixies, guitarist Joey Santiago added in some surf guitar and the song took on a whole new power, becoming just about the closest thing the Pixies ever came to a mainstream pop tune.” Black Francis, “It’s about winos and hobos traveling on the trains, who die in the California Earthquake. Before earthquakes, everything gets very calm — animals stop talking and birds stop chirping and there’s no wind. It’s very ominous. I’ve been through a few earthquakes, actually, ’cause I grew up in California. I was only in one big one, in 1971. I was very young and I slept through it. I’ve been awake through lots of small ones at school and at home. It’s very exciting actually — a very comical thing. It’s like the earth is shaking, and what can you do? Nothing.” Singer/songwriter Pete Yorn, who has covered the song with Liz Phair, “It was one of those songs that stopped me in my tracks when I first heard it back in the day. It informed my sense of melody in a big way.”

494.  “Made of Stone,” The Stone Roses.  Songwriters: Ian Brown, John Squire; Did Not Chart; 1989.  Songwriter John Squire on the emotion he felt when recording “Made of Stone,” “Making a wish and watching it happen, like scoring the winning goal in a cup final on a Harley electroglide dressed as Spiderman.” Music journalist David Pollock, “This first single from their debut album is the one to hold up when someone claims the Roses were musically oikish and lyrically simplistic. Squire’s guitar and Gary ‘Mani’ Mounfield’s bass wrap around each other seductively. The lyrics, meanwhile, evoke fiery death on the road – in this case, that of Squire’s art muse Jackson Pollock – and encapsulate the bittersweet feeling of being young and broke but as free as it gets. ‘Sometimes I fantasize / When the streets are cold and lonely / And the cars they burn below me / Don’t these times fill your eyes?’ is as perfect as a pop lyric gets.”

493.  “Light Rain,” The Leaving Trains. Songwriters: James Moreland, Manfred Hofer; Did Not Chart; 1986. The Los Angeles indie rock band The Leaving Trains released thirteen albums over two decades.  The band was basically a vehicle for songwriter for “Falling” James Moreland, a one-time spouse of Courtney Love, who hired a revolving supporting cast.  “Light Rain” has a sound reminiscent of R.E.M. and wants to burst into an anthem, but is too shy and terse to do so.  Ryan Adams, “The Leaving Trains literally shaped my teenage life and my guitar playing and songwriting.”  Whew, that’s a lot of responsibility/blame to place on Moreland, a cross dressing punk rocker.

492.  “I Think I’ll Just Stay Here and Drink,” Merle Haggard.  Songwriter: Merle Haggard; #1 country; 1981.  If you want to make a list of classic country drinking songs, you might want to start with Haggard’s “Swinging Doors,” “The Bottle Let Me Down,” “Misery and Gin,” and “I Think I’ll Just Stay Here and Drink.”  An abnormally long single for its era at four and a half minutes, Merle pauses for multiple guitar breaks, a piano solo, and gives Don Markham an opportunity to wail on the saxophone. Merle Haggard biographer David Cantwell on Haggard’s only #1 single on MCA Records, “This single is as close as Merle had come to capturing the energy and abandon of his live shows.”  The hair metal band Warrant of “Cherry Pie” fame covered this song as “The Professional Bull Riders” “party anthem” in 2017.

491.  “Man out of Time,” Elvis Costello.  Songwriter: Elvis Costello: Did Not Chart; 1982.  Working with former Beatles engineer Geoff Emerick, Elvis Costello’s 1982 “Imperial Bedroom” album had a more sophisticated and varied sonic texture than his previous releases.  Costello, never at a loss for words, “At the time of ‘Imperial Bedroom’ I came to terms with the fact that I was sacrificing the power of certain songs to this mad pursuit of tempo. Everything had to be delivered forcefully. ‘Man out of Time’ is the one time I said, ‘No, stop. Let’s play this at the right tempo.’ And we went for a bigger, more open sound.  I think it’s a really good record.” His mood when writing the song? “Disgusted, disenchanted, and occasionally in love, ‘Man Out of Time’ was the product of a troubling dialogue with myself that continued through my more regretful moments. I recall looking at my reflection in the frozen window of a Scandinavian tour bus without any idea who the hell I was supposed to be. I was trying to think or feel my way out of a defeated and exhausted frame of mind to something more glorious.” The conclusion of Iman Lababedi from Rock NYC, “The best song from one of his best albums.”