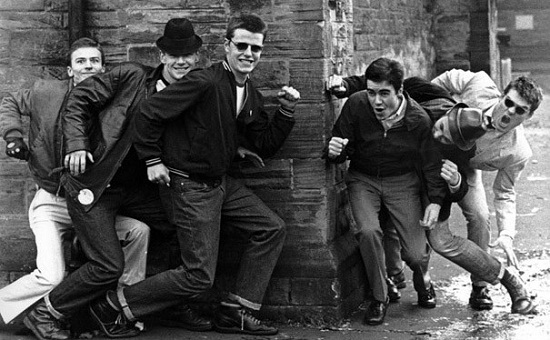 I tried my imagination, but I was disturbed.

300.  “Heaven,” Robyn Hitchcock and the Egyptians.  Songwriter: Robyn Hitchcock; Did Not Chart; 1985.  “Heaven” is as traditional a pop song as you’ll ever hear from Robyn Hitchcock, a soaring jangle pop number that salutes a woman with “heaven in your eyes.”  From the book “Alternative Rock” by David Thompson, “A song so pure that ‘Melody Maker’ (magazine) was memorably moved to muse, Hitchcock had as much business writing it as George Michael would have penning ‘Layla.’”  I prefer the live version on the 1985 album “Gotta Let This Hen Out” to the studio version that ends the 1985 “Fegmania” record.  The live record kicks off with a more traditionally Hitchcockian number – “Sometimes I Wish I Was a Pretty Girl.”  Why the wish?  So, of course, he could wreck himself in the shower.

299.  “Our House,” Madness.  Songwriters: Chris Foreman, Cathal Smyth; #7 pop; 1983. The English ska band Madness released fourteen U.K. Top Ten singles from 1979 to 1983.  In the U.S., they hit the Top 40 with the weirdly splashy and doleful “It Must Be Love” and the residence commemoration/celebration of “Our House.” Music journalist Stevie Chick, “A mixture of warm nostalgia, affectionate wit and subtle pathos, ‘Our House’ was a homely portrait of (singer Carl) Smyth’s youth, with father, mother, sisters and brothers all cramped in one chaotic abode, love and mischief abiding, and a bittersweet middle eight suggesting those familial ties might not always bind. It’s the kind of unpatronising portrait of working-class life that pop music doesn’t seem to deliver any more, though its sentiments – not to mention the swooning strings, Barson’s barrelhouse piano chords and Chris Foreman’s twangy guitar – gave ‘Our House’ universal appeal.”

298.  “A Hazy Shade of Winter,” Bangles.  Songwriter: Paul Simon; #2 pop; 1988.  Susanna Hoffs first heard Simon & Garfunkel’s “A Hazy Shade of Winter,” a contemplative look at aging, while working at a ceramics factory.  Hoffs, “When it came on the radio, I thought, ‘Oh wow, this is perfect for the Bangles.’ It has this riff that’s so catchy, has all these harmonies, and it’s kind of folk rock – just right up our alley.”  Guitarist Vicki Peterson, “That was a tough one because the original was performed on a 12-string acoustic. That was a struggle to figure out how to play it so it sounds as cool but different. The answer was to rock it up, but it wasn’t easy. (We gave it a) gnarly guitar tone with a pop choral feel, sort of a cross between the Mamas and the Papas and Whitesnake.” In the ultimate compliment department, when Simon & Garfunkel performed the song at reunion concerts in 2003, they used the Bangles arrangement.

297.  “Amarillo by Morning,” George Strait.  Songwriters: Terry Stafford, Paul Fraser; #4 country; 1983. George Strait has been successful for so long that it seems like he must have been releasing #1 singles right out of high school, but the Texas native was pushing thirty when he was picked up by MCA Records.  After serving four years in the Army and completing his college degree, Strait performed in Texas clubs with his Western swing influenced Ace in the Hole Band.  He broke country Top Ten with his first single in 1981 (“Unwound”) and had his signature hit in 1983 with his cover of “Amarillo by Morning,” which surprisingly only peaked at #4.  Songwriter Terry Stafford, best known for the 1964 Elvis sound alike single “Suspicion,” wrote “Amarillo by Morning” with Paul Fraser and Stafford’s original version was a #31 country hit in 1974.  It was covered by rodeo champion/singer Chris LeDoux in 1975, but nobody emphasized the pensive melody like Strait.  It’s a song about a man who has lost all his money and his family, but the freedom in chasing his dream provides all the satisfaction that he needs.

296.  “Everything is Broken,” Bob Dylan.  Songwriter: Bob Dylan; Did Not Chart; 1989. Blogger Tony Attwood on Dylan’s look at a non-functioning universe, “The list of what is broken (that opens the song) is overwhelming, or at least would be if it were not sung to such a lively song. We are bouncing along in a post-modernist wreck of the world, walking over the ruins of a society that we once had while those who are left scrabble around in the remains looking for anything to help salvage their lives.  Law and order has all gone and we’re jiving as the world ends.”  At least Bob gave us a snappy tune to enjoy with our collective physical, social, and psychological entropy.  Sheryl Crow, with support from Jason Isbell, released a cover of “Everything is Broken” in 2019.

295.  “867-5309/Jenny,” Tommy Tutone.  Songwriters: Alex Call, Jim Keller; #4 pop; 1982.  The Northern California band Tommy Tutone formed in 1978 and first hit the Top 40 with the completely forgotten “Angel Say No” in 1980.  With the dawning of the MTV era, the timing was right to launch what became the best known telephone digits in pop music history.  Songwriter Alex Call, “Despite all the mythology to the contrary, I actually just came up with the ‘Jenny,’ and the telephone number and the music and all that just sitting in my backyard. There was no Jenny. I don’t know where the number came from, I was just trying to write a 4-chord Rock song and it just kind of came out. I had the guitar lick, I had the name and number, but I didn’t know what the song was about. This buddy of mine, Jim Keller, who’s the co-writer, was the lead guitar player in Tommy Tutone. He stopped by that afternoon and he said, ‘Al, it’s a girl’s number on a bathroom wall,’ and we had a good laugh. I said, ‘That’s exactly right, that’s exactly what it is.’ I’ve met a few Jennys who’ve said, ‘Oh, you’re the guy who ruined my high school years.’ But for the most part, Jennys are happy to have the song.” Lorene Burns, quoted in an Alabama newspaper in 1982 on the joys of having the celebrated phone number, “When we’d first get calls at 2 or 3 in the morning, my husband would answer the phone. He can’t hear too well. They’d ask for Jenny, and he’d say ‘Jimmy doesn’t live here any more.’ Tommy Tutone was the one who had the record. I’d like to get hold of his neck and choke him.” I should also note that the line “you don’t know me, but you make me so happy” is one of rock music’s most subtle celebrations of self-gratification.

294.  “Pancho and Lefty,” Merle Haggard and Willie Nelson.  Songwriter: Townes Van Zandt; #1 country; 1983. “Pancho and Lefty” is a melancholy, cinematic classic of outlaw betrayal that songwriter Townes Van Zandt first released in 1972.  Emmylou Harris released her cover version on her 1977 #1 country album “Luxury Liner,” but it wasn’t a hit until Haggard and Nelson released their duet version, recorded at the recommendation of Nelson’s daughter, Lana.  Townes, who was included in the Haggard/Nelson video for the song, found the composition useful on another occasion.  Van Zandt, “We got stopped by these two policemen and they said ‘What do you do for a living?,’ and I said, ‘Well, I’m a songwriter,’ and they both kind of looked around like ‘pitiful, pitiful,’ and so on to that I added, ‘I wrote that song ‘Pancho and Lefty.’ You ever heard that song ‘Pancho and Lefty’? I wrote that,’ and they looked back around and they looked at each other and started grinning, and it turns out that their squad car, you know their partnership, it was two guys, it was an Anglo and a Hispanic, and it turns out, they’re called Pancho and Lefty.  I hope I never see them again.”

293.  “Run to You,” Bryan Adams.  Songwriters: Bryan Adams, Jim Vallance; #6 pop; 1984.  The cheating song “Run to You” was written for, and rejected by, Blue Oyster Cult.  Producer Bob Clearmountain, “When I first heard ‘Run to You’ I thought it was pretty good, but Bryan was thinking about leaving it off the album. It had such a great guitar hook, which was there right from the start, and everything was kind of based around that hook. Sure, it was real simple, with a nice and simple melody, but it just sounded like a hit song to me.”   Co-writer Jim Vallance on the preparation for the “Cuts Like a Knife” album, “Bryan and I got together in my basement studio every day for a year. Noon till midnight. Some days were more productive than others, but we always put in the time and did the work.”

292.  “Luka,” Suzanne Vega. Songwriter: Suzanne Vega; #3 pop; 1987.  New York singer/songwriter Suzanne Vega broke pop and won a Grammy with her child abuse lyric “Luka.”  Vega in 1987, “A few years ago, I used to see this group of children playing in front of my building, and there was one of them, whose name was Luka, who seemed a little bit distinctive from the other children. I always remembered his name, and I always remembered his face, and I didn’t know much about him, but he just seemed set apart from these other children that I would see playing. And his character is what I based the song Luka on. In the song, the boy Luka is an abused child—in real life I don’t think he was. I think he was just different.” From a letter that Prince sent to Suzanne Vega, “Luka is the most compelling piece of music I’ve heard in a long time. There are no words 2 tell you all the things I feel when I hear it. I thank God 4 u.”

291.  “Into You Like a Train,” The Psychedelic Furs. Songwriters: Richard Butler, John Ashton, Roger Morris, Tim Butler, Duncan Kilburn, Vince Ely; Did Not Chart; 1981. Richard Butler, still sounding very much like John Lydon, sings about a physical desire that’s like a freight train on this 1981 album cut.  Blogger Jim Connelly, “The Psychedelic Furs ‘Talk Talk Talk’ album is where they balanced the two-guitar drone that dominated their debut with the pop ambition that eventually irrevelantized them. ‘Into You Like a Train” was a roaring sex song that faded in from eternity with a fuzzy haze of pounding drums and Duncan Kilborn’s squealing sax to start the second side of the record. The music was deep and wide and huge, and with Richard Butler’s perfectly melodic raspy vocals on top, sounded absolutely amazing.” Matthew Hay Brown of The Baltimore Sun on Richard Butler’s “buzzsaw” vocals, “A one-of-a-kind voice, the unlikely marriage of Johnny Rotten’s outrage with David Bowie’s cool, run through nodule-hardened vocal cords.”