GRAMMY-winning rock band, SWITCHFOOT brought together over 17,000 people to give back at the 15th Annual BRO-AM Benefit Party and Beach Fest that took place at the end of June.

This year SWITCHFOOT BRO-AM Foundation raised over $150,000 to support the San Diego youth initiatives for six beneficiaries: A Step Beyond, Challenged Athletes Foundation, Feeding San Diego, Rob Machado Foundation, Stand Up For Kids Oceanside, and  VH1 Save The Music.

Since the inaugural BRO-AM in 2005, the events have raised over 2 million dollars for San Diego youth programs impacting homeless, at-risk and disadvantaged kids. SWITCHFOOT BRO-AM Foundation grants focus on initiatives that create a thriving future – physical and community well-being along with opportunity and empowerment through music, art, surfing and education.

BRO-AM Beach Fest featured a crowd packed concert on Moonlight Beach with performances by SWITCHFOOT, Lindsey Stirling, Sack Lunch with Rob Machado, and 91X Battle for the BRO-AM winner Creature and the Woods, and a very special appearance by youth musicians from VH1 Save The Music Foundation who performed mainstage with SWITCHFOOT. 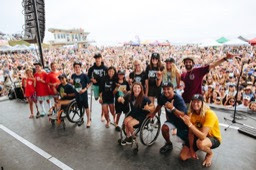 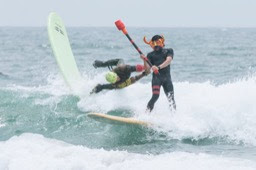 In addition to charitable giving and live musical performances, there were a variety of surf events at Beach Fest – a BRO-AM teams contest with ten local teams, the Rob Machado BRO-Junior, a surf jousting battle, and a Junior Seau Foundation Adaptive Surf Program presented by the Challenged Athletes Foundation. World-renowned local surf legend Rob Machado and 39 other professional and amateur surfers competed in a four-person BRO Team Surf Contest riding one wave regular and one wave switch (keeping it more “bro” than pro).

The winner of the Rob Machado Bro Junior Surf Contest, a contest that judges kids on who has the most fun, was Cole McCaffray.

One of the most inspirational moments of the day is the Challenged Athletes Foundation Kids’ Adaptive Surf Series where kids with physical challenges are given the opportunity to compete with surfers from the team contest supporting them in the water while thousands of spectators are cheering them on. BRO-AM’s surf events wrapped with the hilarious Surf Joust Expression Session, complete with battle armor and nerf weapons on soft surfboards, with Ryder DeVoe taking home the new BRO-AM surf joust winner belt.

Over 200 volunteers helped make BRO-AM’s Beach Fest happen! Almost half of the volunteers participated on the Green Team helping with waste diversion efforts to educate attendees on proper sorting of compost, recycle and landfill in partnership with the City of Encinitas and Solana Center (a local environmental innovation organization).

For the first time at BRO-AM, Solana Center set up a Recycle Redemption Booth where event attendees could get points for recycling at the event. Points were exchanged for exciting swag. The ultimate Recycle leaderboard winner was a young girl, Rocklyn Smith, who recycled over 100 items at the event!

The BRO-AM events set good “green” examples in many other ways through the use of solar energy to power their stage and sound avoiding approximately 1400 lbs of CO2. And a free filtered water oasis was offered at the event encouraging no single-use plastic thanks to a partnership with the Rob Machado Foundation. Attendees BYOBottles which helped save nearly 2,700 single-use plastic bottles from ending up in our landfills or the ocean! 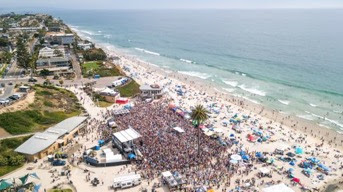 In 2005, after traveling the world, SWITCHFOOT dreamed up an idea to give back to their hometown that supported them as surfers and musicians, to rally their great community and to invest in kids who might need a hand up. Over a decade later, their idea has grown into these two iconic annual San Diego events that bring together over 17,000 people for a community giving movement whereas SWITCHFOOT says, everyone can “Play Your Part”.

Formed in San Diego in 1996, SWITCHFOOT is Jon Foreman (vocals, guitar), Tim Foreman (bass), Jerome Fontamillas (keyboard, guitar), Drew Shirley (guitar), and Chad Butler (drums). Since their start, the band has sold over 6 million copies worldwide of their eleven studio albums (including their 2003 double-platinum breakthrough The Beautiful Letdown and 2009’s Grammy Award-winning Hello Hurricane), racked up a string of Alternative radio hit singles, and performed sold-out world tours with over 4 million concert tickets worldwide. Beyond their career achievements and creation of BRO-AM, SWITCHFOOT has also maintained a deep commitment to a variety of humanitarian causes, lending their support to such worthy organizations as Food for the Hungry, CURE International, DATA, the ONE Campaign, Habitat for Humanity, and To Write Love on Her Arms.