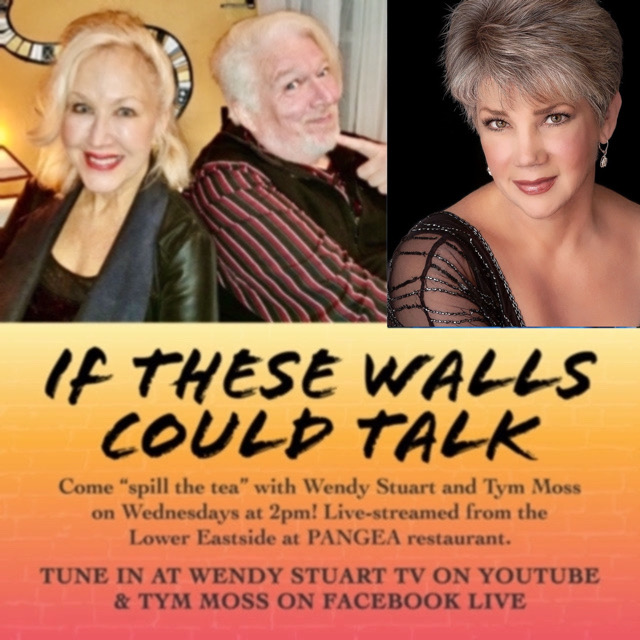 Sue Matsuki will be a featured guest on “If These Walls Could Talk” with hosts Wendy Stuart and Tym Moss on Wednesday, July 7th, 2021 at 2 PM ET live from the infamous Pangea Restaurant.

Sue Matsuki is the Managing Partner, Co-Editor, Reviewer and a Columnist (Sue’s Views) for an on-line entertainment magazine: www.Cabaret Hotspot.com! She teaches classes in Cabaret and Jazz performance, lyric connection, jazz phrasing, and the business of self-producing and self-promotion. She is the producer of Urban Stages’ Winter Rhythms annual show producing 20 shows over 20 days with over 200 performers. She co-authored her first book with David Sabella, So You Want to Sing Cabaret (Rowan & Littlefield) now available on www.Amazon.com. She, along with Gregory Toroian, host a monthly Jazz Brunch Open Mic and do a monthly supper club gig at West Bank with Skip Ward (bass) in New York.

Artistically, Matsuki is a multi-award-winning singer and songwriter. Her most cherished awards come from winning the 2020 Bistro Award for Outstanding Jazz Collaboration celebrating her 25th year of working with Gregory Toroian; getting her poster up on the “Wall of Fame” for How’s that for Openers? on the 33rd Anniversary of singing at Don’t Tell Mama and being selected personally by the late Julie Wilson as the very first 2004 Julie Wilson Award Recipient, given by the Mabel Mercer Foundation.

This 35-year veteran Cabaret/Jazz singer and comedian has played legendary jazz clubs: The Village Gate, Birdland, The Iridium, Sweet Rhythm; she’s played Carnegie Hall and every New York City Cabaret including: Feinstein’s 54 Below, Feinstein’s at the Regency, The Birdland Theater, The Algonquin, The Metropolitan Room, The Laurie Beechman, Pangea, The Beach Café, Town Hall, Arci’s Place, Don’t Tell Mama, 88’s, Judy’s, Danny’s, Jan Wallman’s, The Duplex, The Triad, Caroline’s Comedy Club, Helen’s Hideaway Room and Broadway Baby in New York; The Cosmopolitan Room and Odette’s in PA; The Fairbanks Summer Arts Festival in Alaska; The Gardenia Room in LA; The Palace (Waterbury), The Magnolia Room (Norwalk), the Westport Library (Westport) and The Standing Room Only Cabaret (Hartford) in CT; The Hackensack Cultural Arts Center, Voices for Charity, Trumpets & Le Dome at The Manor in NJ; Maureen’s Jazz Club, The Rockland Cultural Arts Center & Neil Berg’s 100 Years of Broadway Series in Nyack & Town Hall in Tarrytown, NY; the CabaretFest in MA; Boothsbay Harbor Opera House in Maine and The Four Seasons in Las Vegas where she produced a show for the Special Warriors Foundation (now the Wounded Warriors). Ms. Matsuki was named a “Best of Connecticut” by The Connecticut Magazine and, as such, did a benefit for the March of Dimes at the Foxwood’s Casino.

She was a Super and “Diva Double” at the Metropolitan Opera where she was featured in Moses und Aaron (Voice of God); Tristan und Isolde (Braganea double); Norma (Druid Princess); and Il Travatore (Court Lady & Leonora double). She was also invited to sing with the Met chorus in a special presentation of After the Ball by Noel Coward starring the late, great Irene Worth.

Matsuki has served on the Board of Directors for MAC (Manhattan Association of Cabarets and Clubs) as the Treasurer; was on the Board of The Salon and is a member of the Dutch Treat Club. She is often affectionately referred to as “The Godmother of Cabaret” for all the support that she gives to the community.

Watch Sue Matsuki on “If These Walls Could Talk” with hosts Wendy Stuart and Tym Moss on YouTube here: