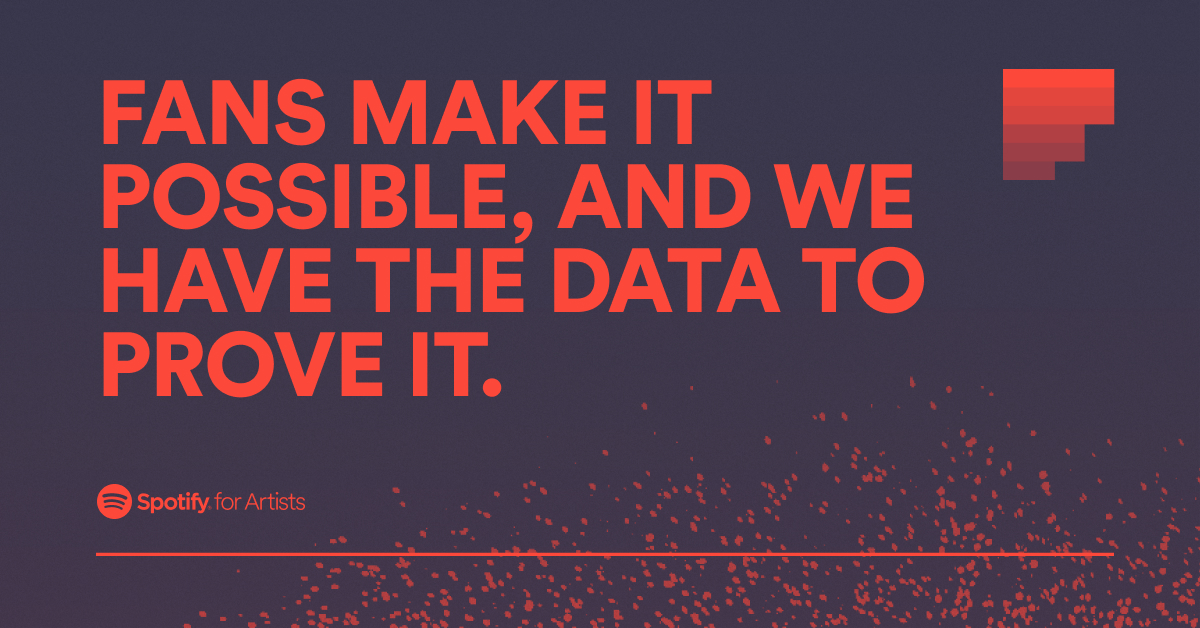 Spotify wants to help artists: in its first-ever ‘Fan Study,’ the streaming platform is revealing tons of data, and insights that could be useful for artists if they want to grow their audience. The new website presents a series of 15 recommendations coming from data-based studies,s in order to empower artists on their platform.

‘Fans make it possible, and we have the data to prove it. Welcome to the first Fan Study from Spotify for Artists. We’ve analyzed millions of data points to uncover 15 new insights, each designed to help your team develop the fanbase you need to reach your goals,’ you can read at the top of the website.

A lot of these 15 recommendations are based on the ‘revelation’ that music has no frontier and Spotify is proposing new opportunities to improve your career if you are in a band. According to the studies, Latin America discovers the most new music, and Latin America’s major cities consistently consume the most new music, as the residents of Sao Paulo, Santiago, and Mexico City are streaming the most new content by far, these cities should be targeted by artists.

Another recommendation focuses on the increasingly blurred lines between genres, and the constatation that plenty of fans of one genre listen to another genre: For example, 53% of metal fans also follow Hip Hop artists, and 77% of electronic fans listen to pop. To take advantage of this, Spotify proposes to tag a track with multiple genres.

Third revelation: local music doesn’t exist, music is global and travels the world… which I could have told you without looking at any data. But Spotify insists, they have data and for example, over 80% of K-Pop, South African House, German Techno and Reggae listens happen outside of their home country, while 95.2% of Latin hip hop is streamed outside of its region.

Spotify also insists that listeners are coming from unexpected places like Discord that sent over 800k listeners to Spotify in a month, listeners who went on to listen to nearly 9M tracks in just 14 days. Besides Discord, the best inbound traffic sources to Spotify are Runkeeper Pro, Linkedin, and Snapchat which means that artists should consider developing a presence on these platforms.

Then it’s all about focusing on fans who have a strong intent to relisten, the fans who save the track (and so show some interest), it’s about creating a marquee (a full-screen sponsored recommendation of a new release) for these fans which could increase saves of the track up to 3 times.

Playlists are also supposed to be a big part of these strategies as user playlists lead to more streams: After a listener adds a track to a personal playlist, they’ll listen to the artist 41% more and look at his/her profile 12% more often. In fact, 60% of all merch purchased from Spotify profiles comes from listeners who have playlisted the artist.

An interesting insight focuses on hardcore fans of an artist: they represent the top 5% of an artist’s fandom and they are listening 6 times more than the rest of the fans. This is especially true for religious, classical, and rock genres! To reinforce this interest, Spotify proposes music + talk — a feature that allows artists to record talk segments and integrate them with tracks — in order to deepen their connections with their top fans.

Spotify’s Fan Study also proposes an update of the artist profile before a release as there is a massive traffic spike to an artist profile on the day of release (an increase of 77%). The trick is also to keep sharing on social media and promoting a release after the track or album is out as 53% of releases peak more than 7 days after release. New releases also give an artist’s music a bump, as catalog streams usually get a 15-20% lift on new release day. That’s why artists should capitalize on the release week to attract a bigger audience. Spotify also suggests adding a Canvas to any song to make it more likely to get shared. A Canvas is a short looping visual the artist can add to each of the tracks on Spotify.

Another interesting piece of information tells us that merchandise is very much linked to genres. If vinyl is hot for any genre, indie listeners buy more vinyl than country fans or electronic fans, while metal or rock fans are big on shirts. As merchandise is an excellent way to earn cash, artists should be creative (masks are still a possibility), use any tool to target their fans, and even use platforms such as Merchbar,

Despite the streaming platform dominating the market, some cities are still buying CDS (Phoenix, Los Angeles, London, Austin) and Spotify offers data about specific merch items on different markets so bands can offer to their fans geo-target experiences. As for vinyl, unsurprisingly customers are overwhelmingly young while people born before 1980 prefer to buy shirts.

I have barely scratched the surface, Spotify’s Fan Study is providing an impressive amount of data and information. Bands that are interested to grow their fan base — and why wouldn’t they? — can sure take advantage of all this. But after reading all this, I feel a bit depressed: if you are a struggling artist who cannot afford to pay someone to do all that stuff, there is no way you can concentrate on your art if you have to pay attention to all these things and strategize each of them. Artists are not supposed to be business people, but, sadly, they have to these days.