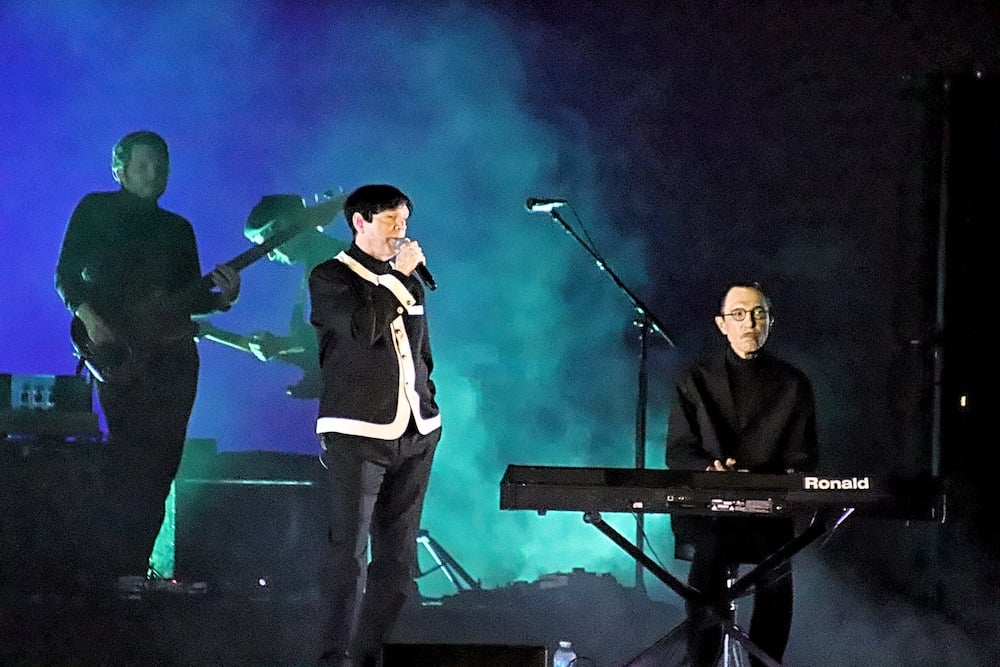 Thanks to a last-minute opportunity, I got to see Sparks’ sold-out show at Hollywood Forever Cemetery. The famous duo played a short but memorable performance with a full band, just before the screening of ‘Annette,’ the new movie directed by Leos Carax. It has just arrived in theaters and on Amazon Prime, after a grand opening at the Cannes Film Festival earlier this year.

‘Annette’ has been a long-term project and the fruit of a friendship between Ron and Russell Mael and Leos Carax. About 9 years ago, the two brothers wrote the music of this rock opera which was then conceived as a stage performance that they would tour around the world. Nevertheless, they sent the work to Carax, who had already used one of their songs in his 2012 ‘Holy Motors,’ and the French director decided to make a film, a musical, focusing on it for many years. If the story and most of the music were complete before ‘Annette’ became a movie, Carax certainly refined the characters and brought in his deeply personal vision.

For some reason, Sparks has never really been on my radar, but as soon as they started playing, I immediately recognize the sound: an exuberant and eclectic blend of glam rock, bright pop, and operatic rock delivered with theatrical antics and a frenetic optimism. They may have only played 6 songs, but the two brothers were in great shape with formidable energy and Russell’s voice reaching high-octave. They arrived on stage with big fanfare and performed ‘So May We Start,’ the song that opens the movie with the characters and Sparks singing in the streets of LA, like a behind-the-scenes of an opera premiere.

With their great sense of theatrics, the synth dancefloor ‘Angst in My Pants’ was followed by two songs of the movie, the swooning ‘We Love Each Other So Much,’ that they managed to animate with poignant keys, and the funny and infectious ‘You Used to Laugh.’ People had already settled down on the floor to watch the movie, but how could anyone have stayed still during this one? Besides the newbies, Sparks played the hits, that’s what you do for such a thing: the disco ball of ‘The Number One Song in Heaven’ moved Ron from his keyboard to execute some eccentric on-the-spot dance moves for everyone’s great pleasure. Of course, they closed their mini set with the humorous ‘This Town Ain’t Big Enough for Both of Us’ and its Queen-like opera-rock grandiosity. Quirky is an adjective I have seen a lot when describing Sparks’ music but there was only pure joy and a standing ovation when they were done. I was just sitting behind the sprawling VIP section and looking at his Instagram, Beck was sitting somewhere there, enjoying the same spectacle.

‘Annette’ is an odd movie, there’s no other way to put it. It wanders through the life of a couple for 2 hours and 20 minutes without following any rule of a commercial movie with fast-paced action or redeeming outcome. Instead, we get long scenes of a rather mismatched couple walking in the woods and singing their mutual love for each other. The new Sparks song doesn’t say much more than ‘We love each other so much,’ and for some time, this is the only thing happening on screen.

‘Annette’ is first a musical telling the apparently simple story of a stand-up comedian named Henry McHenry (Adam Driver), and a brilliant soprano, Ann Defrasnoux (Marion Cotillard). It’s a story about fame, success, violence, and disgrace told many times before, but probably never this way. Each night, Henry performs the ‘Ape of God’ at the Orpheum Theater in Los Angeles and if he seems to assault and bully his public with his self-destructor sense of humor, people don’t seem to have enough of his bizarre act. However, there is no punch line, and nothing sounds remotely funny. He performs in a bathrobe and his monologues could sound like celebrity melt-downs posted on YouTube, while his very dark tirades become more and more scabrous throughout the movie. He is just bad despite his current success, even though he repeatedly implores the audience to ‘laugh, laugh, laugh,’ a line that could suggest the Sparks song, ‘Rock, Rock, Rock.’

Ann is a successful soprano who performs at the prestigious Walt Disney Hall, and, like many opera heroines, she ‘dies’ every night on stage. The two meet and get married. Soon, Ann gives birth (while laughing) to a daughter they name Annette. If this sounds completely ordinary, you must know that Annette is a wooden puppet, even though no one in the movie seems to notice. This immediately places the story to a surreal level, blending reality with fairy tales, and spectacular scenes such as Adam Driver’s angular profile watching his wife dying on stage.

Revealing more about the story will not spoil anything because of the oddity of the cinematography: Henry’s career slowly but surely sinks while Ann sells out the opera hall every night. Ann dies like a true movie star, à la Natalie Wood, falling from a yacht and drowning during a drunken night, while the scene looks as cartoonish and artificial as you are wishing for. Not long after, Henry discovers that his daughter can sing beautifully and decides to make the toddler perform in front of growing audiences, despite the remark of the orchestra conductor (played by Simon Helberg) who is still in love with Ann: ‘This is exploitation.’ The narrative takes a dramatic turn but since the entire movie is conceived like a Puccini opera, this was expected.

Music is obviously the big star of this strange musical, it backs up almost every dialogue and scene, from Henry’s wild motorbike night rides to love-making scenes where he performs a very specific act on Ann – oral sex, but he still manages to sing! Sparks’ songs bring emotions front row in a movie that sometimes meanders for too long around the life of a bestial comedian, who becomes a bad husband, a bad father, and honestly a bad man.

I still don’t know exactly how I feel about the movie, but it still affected me, and I pity the people who left before the end as the last scene is absolutely heart-wrenching. ‘Annette’ is too weird for mainstream, too unconventional for a musical, and it’s more Jacques Demy meets Goddard than La La Land. Also, there’s very probably much more in the movie than what meet the eyes and the brain at the first watch: I don’t know if this is a stretch – although Ann sure eats a lot of apples – and I am still wondering about the growing red mark on Henry’s face.

As for Sparks, after the release of the Edgar Wright-directed documentary in June, the two brothers are making a big comeback with this new fairy tale musical. ‘Annette’ is worth the trip just for this reason.