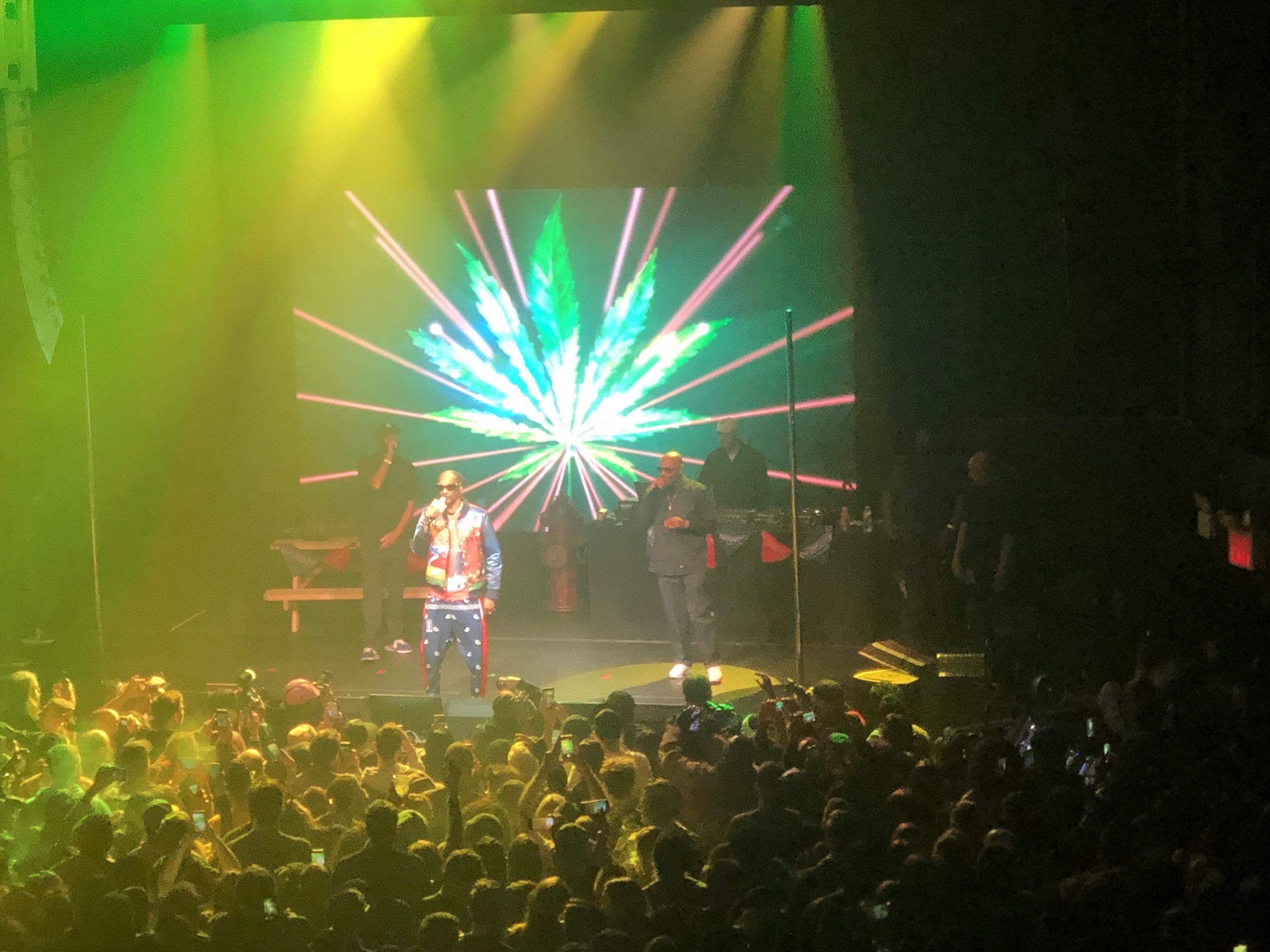 If Snoop Dogg didn’t look like a Charles Schultz character, if he didn’t have that soft, faux Southern flow, to mask his aggressive, Crips affiliated, prison bouncing, teen years, Snoop would be opening for his friend Warren G. Warren’s opening set might not have better material but Snoop is a cartoon figure and his friend, and former band mate with the late Snoop cousin Nate Dogg, isn’t. On stage last night at the Gramercy Theatre, Snoop was chill but Warren was cool. Both acts were going through the motion but while Snoop exuded indifference, Warren was flirty and charming.

It was an odd evening, the progenitors of G-Funk had no backing band at all, just a DJ. But surely the whole point of Dre’s mixing of Parliament-Funkadelic was a strict move away from beats and wheels of steel to full band bass and drums workouts? It started the Coast Wars, Suge, Dre, Snoop, Tupac and on, stopped using samples and started using songs, while the East Coast had Diddy and Jay Z lifting entire pop songs and rapping over em till the chorus, where they hand it over to a huge sample (try “Mo’ Money, Mo Problems” as a prime example). Thirty years later, who cares? Not even Snoop, who morphed into a brand mixing weed with mainstream pop culture stardom, and rapping, to emerge as a superstar, while Nate died and Warren rides shotgun.

On the road with another dog Dogg album to flog and he doesn’t at all, performing two songs off the newbie and four off Doggystyle, plus six from his featured work including set closer biggie “Young, Wild, And Free”. The Snoop show was very summerstock: way too small for the rapper Gramercy Theatre, 650 capacity (that’s insane), he played the hits, even the featured artist hits, performed for an hour, including a break so he could have a smoke, and was talented enough, he still has one of the best voices (it’s like southern comfort over barbed wire) but he was happy to allow the two pole dancers to give us the thrills while he wandered about the stage.

The night opened with… well, I am not sure who, it said Assholes By Nature but it didn’t sound like Trae The Truth, and the fifteen minute set was mostly somebody trying to give away a boom box. Next was RJMrLA, the 35 year old gangsta rapper who performed a completely professional, though not memorable, set of West Coast OG rap. Then Warren G, who looks like a middle aged, middle class daddy in a white sweater and glasses and, whether chatting up a woman in the front row (“Beverly, may I ask you a mother fucking question?”) or passing a blunt to the audience, he holds your attention with accomplished suaveness. If all you know is Warren’s last song of his set “Regulate,” you know the best though “I Want It All,” from the late 90s, is a showstopper. The all he wants is money, of course, and with his complete ease in his own skin, and Dave Chappelle like bemusement and distance, he gets to the “make money, make money money money” hook and nails it with ease.

Snoop had money on his mind as well, coming out with a plastic gun dispenser and spraying the audience with (monopoly, if it was real they’d be a riot) dollars. I would say it made his point but there is no point worth making, Snoop hasn’t recorded a decent song in decades, though he has had more than his own fair share of featured standouts. He doesn’t much care. Like this threadbear tour, everything is being done on the downlow,  Snoop has given up on his various outthereness, the Rasta album, the born again period (Snoop began his career preteen at the Church choir), here he is offering a definitive product, a greatest hits hour, segued, cut short, chill and calm business: no alarms and no surprises, rapping to mostly his own age group, he barely notices us as he goes through the motions.

This isn’t a huge dis, any night you get to hear “PIMP” is a good night, and Akon’s “I Wanna Fuck You,” “Snoop’s Upside Your Head,”  “Drop It Like It’s Hot,” Gin N Juice”… one banger after another without breaking a sweat. The one time when it felt really special had Snoop bringing out Warren to pay tribute to Nate Dogg, who died after multiple seizures in 2011, for the Missy elliott inspired song, performed when Nate, Warren and Snoop were the supergroup 213, the excellent So Fly” from the early 00s.  Nate had the hook (though Snoop hijacks it on his verse), remember it?  “Ridin’ in my car and I’m listening to the radio, I’m listening to a sad girl sing, sing about how she got her heart broke: She was reaching for stars. “I just want me something natural…” It was really good during a show where everything was alright and Snoop just chilled to the next episode.