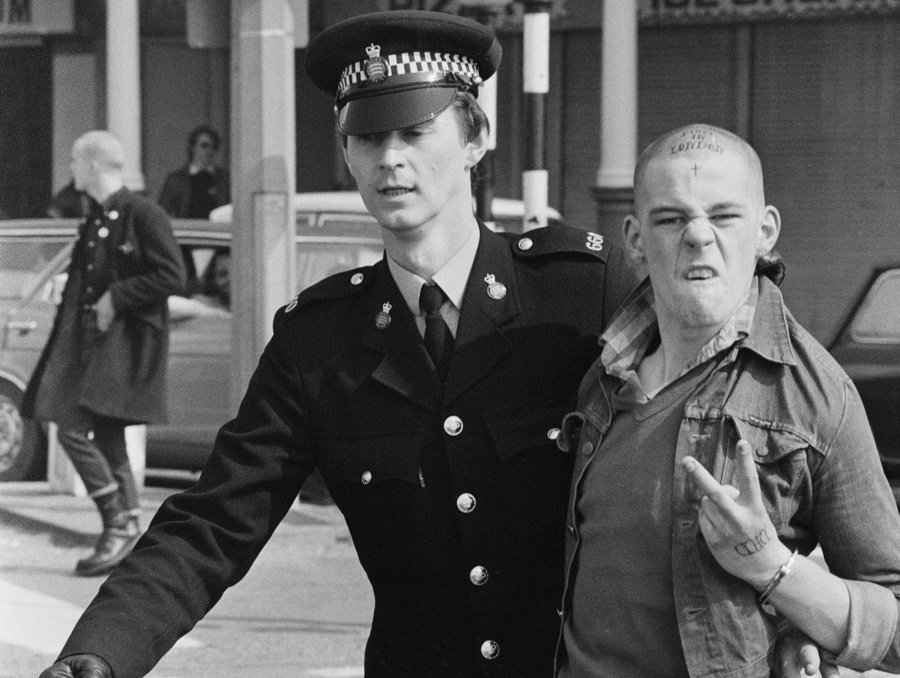 When this word is spoken what pops into your mind?  Neo Nazi bald headed rednecks cursing out the coloreds in a wood paneled basement in Arkansas? I get it.  In the US that’s what we got. Skinheads are in line with the good ol boys of the KKK only we can see their ugly faces.

Put on the kettle, I’m gonna school ya.

Travel back to ‘69 with me, 1969 England actually, let’s leave Billy Bob and the boys on their mamas porch shootin cans, c’mon

Trojan Skins, Traditional Skin, Trads whatever your choice is a group of working class people who jumbled up reggae, rock steady, rockabilly, and made it their own.  Steeped deep in Jamaican culture, I’ve always found it so amusing how people in the States haven’t a clue.  In the 80s as the Oi Skins materialized, it seems somewhere along the line things lost their focus.  Rather than the smartly dressed (Fred Perry, Doc Martens, and pegs only please) became filthy angry assholes.  BillyBob inbreds who decided to shave their heads- perhaps to rid themselves of the lice their trailer park lifestyles festered.

Born of the mod vs hippie with a dash of Jamaican rude boy scene, Trads took pride in the working class roots.  I’ve always furrowed brow on how such a positive movement could have such dark factions.  And yes there are many, the  RASH (Red Anarchistic Skin Heads), the SHARP (Skin Heads Against Racial Prejudice), GASH (Gay Alliance Skin Heads?) but me?  I stand firm with the Trads.  Traditional Skin Heads of the ’69 Trojan days.  Trojan as in Trojan Records.

Trojan Records was the spawn of Island Records, and in 1967 out it popped as Jamaican ska/rock steady label and well, the rest is history.  Over 50 years of providing brilliant ear candy with a contagious beat and powerful lyrics.

My first brush with the skinhead movement didn’t come about until about 1981 when Kevin sat down and drunkenly explained to me the meaning of his boot laces.  I thought he was nuts and also thought i should be taking notes- red, white, yellow wait what?  But in hanging out in his scrappy flat the turntable never stopped and with that became my new interest.  Punk rock girl realized that although it was sexy to scream and flail about, there was a lot more thrust in a good ska beat.  And within the confines of Hartford Connecticut I came into the skin head ska life and now decades later turn to that rocksteady beat to pump me out of dismal.

My new best friends at Blue Beat and Ska helped me to understand that I am not alone.  That most of us evolved from either punk or reggae.  Proud working class ‘do the right thing’  sharp dressed, average and happy about it.  Two tone music never lets you down. The style is timeless, tough but clean and very unlike the punks of the day, not some poshy trend that daddy bought you in the boutique.  I had been on both sides.  I remain on the Trad side.

Although my fringe is much longer now it’s always been there.  Docs still on my feet and at 52 I still cheer “Your goin’ home in a fucking ambulance, you’re gonna get your fuckin head kicked in’… but I wouldn’t hurt a fly and I have bad knees so I aint stomping nothing.. But the powerful feeling of that bam bam bam beat- makes you feel as if you would, given the cause. It is rare but it is comforting to find upbeat aggressive music.  Each genre has its love songs, its ‘done wrong’ songs its dance, its politics but Ska delivers each and every one of those feelings with a tempo that makes it absolutely impossible to sit still.

Bands such as Madness, The Specials, Bad Manners, and Selector all have the common dance element that transcends time.  The English Beat, whose live performances have been covered numerous times on this site have one of the most fascinating fan bases ever.  Old suburban moms and quirky rockabilly gals, really fun, really pure and without a doubt timeless. But that’s today.

Go back in time and discover how this all began.  All you fools thinking this is about race wars I counter that with a playlist of Trad 101

What’s on heavy repeat with me?   Spotify if your best friend- Search these out:

“I Am The Upsetter”  Lee “Scratch” Perry