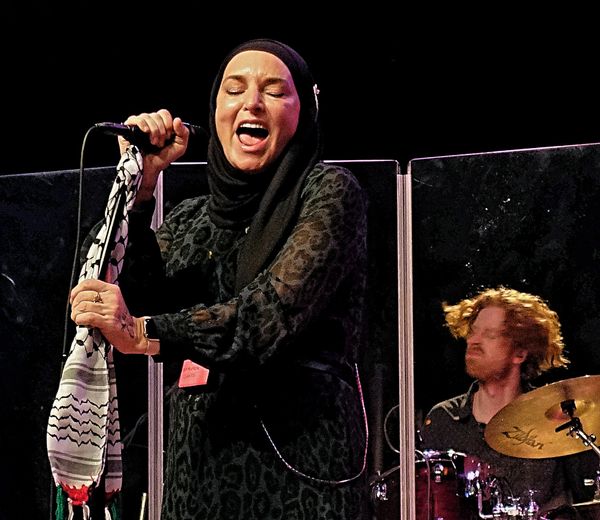 Sinead O’Connor seems to be the most illogical person I can think about, but she never stops to fascinate me. She is one of the music greats, no doubt about it, but her mind works in mysterious ways through painful memories and troubles with mental health. The famous Irish singer has just released ‘Rememberings,’ a revelatory memoir about her childhood and career, and she gave a long interview to the Guardian for the occasion. But what didn’t we already know about her childhood abuse, her tumultuous love life – ‘Four children by four different men, only one of whom I married, and I married three other men, none of whom are the fathers of my children’ – her mental illness, her strong faith in God, and her conversion to Islam?

There still were a few surprising parts in the interview. First, what she says about the religion she has embraced: ‘What I like about Islam is that it is anti-religious. In the same way that Jesus was a militantly anti-religious figure, Allah is saying that people are not to worship anything but God. The worst thing that happened to God is religion. Islam is the most maligned religion on Earth because it has the truths that would make you not worship money, make you not steal, make you be good to your brothers and sisters, make you gentle.’

But isn’t worshipping anything but God the definition of religion? I know she means other religions worship priests – and especially catholic priests whom she hates – but saying ‘Islam is anti-religious’ sounds so weird… as weird as a full feminist wearing a hijab? But again, Sinead’s mind has its own logic.

I just admire her courage and convictions, she was one of the first (maybe the first) to condemn child abuse in the Catholic church, and her tearing up a picture of Pope John Paul II is one of the most iconic moments of SNL. She obviously took some risks and didn’t care about the consequences, and even the transgressive and provocative Madonna criticized her: ‘I think there’s a better way to present her ideas rather than ripping up an image that means a lot to other people,’ the pop star said at the time, ‘If she’s against the Roman Catholic Church and she has a problem with them I think she should talk about it.’ Of course, Madonna is too much of a calculating head to have done anything that could have hurt her career. But Sinead is the real deal, and this despite the terrible physical and sexual abuse she had to endure from her mother. ‘I think that’s why I continue to shave my head, because if I have hair I look more like her, and I don’t like to see her in the mirror. There’s no picture of her in the book,’ she says in the interview.

It took her several years to write ‘Rememberings.’ She wrote the first half before her mental breakdown and wrote the second part four years later, or rather ‘dictated the second part from the nuthouse.’ After a hysterectomy, she became ‘Angry. Raging. I was furious. I was completely gone. I was suicidal.’ ‘Nobody could deal with me. I was very isolated and alone. I’d be looking at them, thinking, what the hell are they all frightened of?’ she explains. ‘I’m 10% bipolar, apparently, 40% complex traumatic stress, and the rest is a borderline personality disorder,’ she admits.

Strangely, her childhood is not the part that triggered her the most, it’s rather a specific memory of a certain purple majesty: ‘No, the only bit that fucked me up was the Prince chapter. When I read it, I was like, holy fuck, that was a really scary night.’ Her encounter with Prince – he hit her with a hard object hidden inside the pillowcase and he chased her in his car – would be more than enough to #metoo any pop star in 2021, but Sinead still thinks it could happen: ‘I’m interested to see if that does happen because I know one woman he put in hospital for months. And she didn’t make a complaint. I think he was a walking devil.’

In the early 90s, she dated Peter Gabriel, who hurt her because he regarded her as his ‘weekend pussy.’ ‘He had chased me for about a year as if he was madly in love with me. He was the type of dude who you’d be away with and he’d put a note under the door to tell you he’s just about to go out on a date with another girl. And he’d get you down for the weekend and then say, you know this isn’t going to go any further.’ To me, this sounds worse than Prince, at least, Prince was direct, he just wanted to beat her up, Gabriel sounds like a jerk.

And when I say Sinead is real, this other part tells everything you need to know about her: ‘I made 10 million quid on the second album [I Do Not Want What I Haven’t Got]. I probably should have made more. I gave away half of it.’ Why? ‘A priest told me: when you grow up and get a job, pay back the money you stole. So as soon as I got the money, I doled it out in various ways to different charities and people.’ That’s not in the book, I say. She looks embarrassed. ‘No. Because you’re not supposed to say when you’ve done a good deed.’