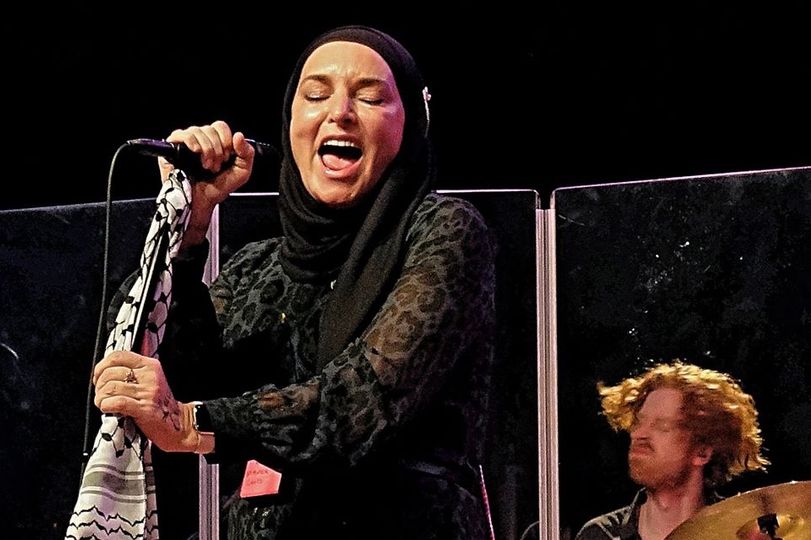 Legendary singer Sinead O’Connor, whom I had the pleasure to see live before the pandemic, is in the news for two reasons. First, she released this sumptuous and solemn cover of ‘Trouble of the World,’ by gospel icon Mahalia Jackson, accompanied by a black & white video demonstrating Sinead’s support to the Black Lives Matter movement. The heavy and chilling vibe of the mini-movie shows Sinead, wearing a BLM shirt, marching in the streets of Peckham, London with a Mahalia Jackson sign and singing in a church wearing her now-familiar hijab.

As you would expect it from Sinead, the rendition is stunning and extremely moving, accentuating the grave tones of her voice. The song is filled with presence and dignity, making her incomparable vocals shine. If Sinead has had her part with mental illness, her recent Twitter feed actually makes a lot of sense, filled with political posts (mostly anti-Trump, anti-police brutality and anti-racism) and showing her support to the protests that erupted after the murder of George Floyd. Sinead, who has never hidden her true feelings, said of the song to the Irish Post: ‘For me, the song isn’t about death or dying. More akin, a message of certainty that the human race is on a journey toward making this world paradise and that we will get there.’

And since the Irish singer is always true to herself, she is donating all revenue from the digital sales to Black Lives Matter charities – you can buy the cover, along with an Acapella version, here.

But the always outspoken Sinead has also reacted to the news of President Trump being hospitalized after contracting COVID-19. She tweeted: ‘Thank you God. #TrumpHasCovid.’ Not everyone was happy about it, and someone replied: ‘That’s a horrific thing to be happy about. That man has children, and she hasn’t done anything. For someone looking for inner peace you wish harm on others,’ while two other people wrote, ‘Horrific remark made worse as from religious advocate’… ‘As a real Muslim that’s an odd thing for you to say,’

But loyal to herself more than to her charitable religion, Sinead added, ‘I couldn’t give a fuck what anyone thinks. I hope it takes him.’

Sinead, who converted to Islam in 2028 and identifies herself as Shuhada Sadaqat, has compared Trump to the devil many times and, despite being a fervent Muslim, is wishing him dead. In any case, this is pointless, since Trump’s life is now under the virus’ power and his doctors’ hands.

I couldn’t give a fuck what anyone thinks. I hope it takes him.