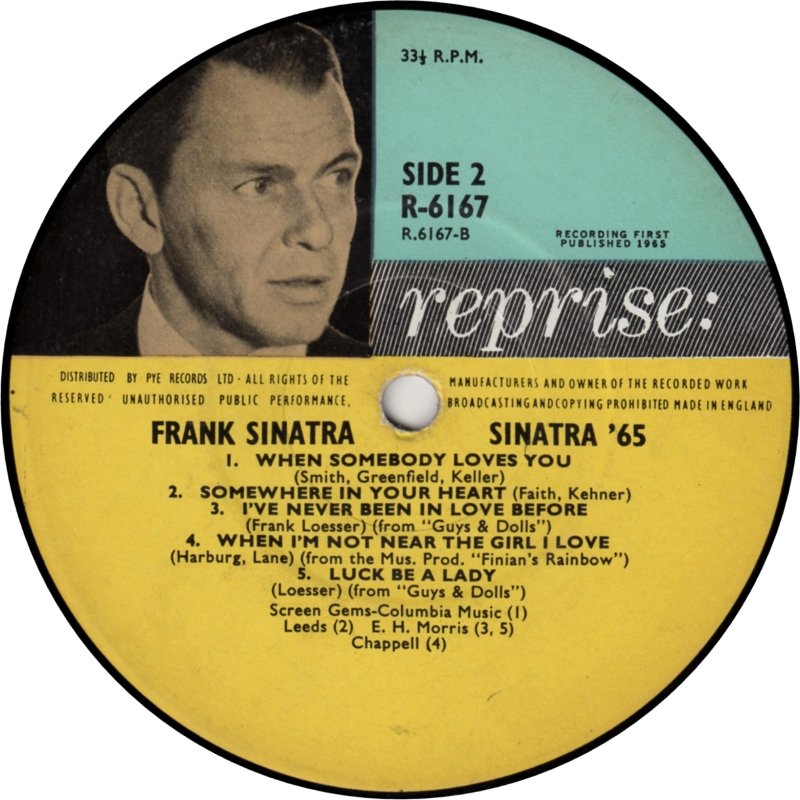 Somewhere else in 1965,  the Beatles were releasing Rubber Soul (UK) and changing the world of the recorded long player as thoroughly as Frank Sinatra did literally ten years earlier with In The Wee Small Hours (here). Elsewhere, album #34, a compilation of two years of songs from sessions and singles that includes “My Kind Of Town” -his second and best ode to the second city,  with an additional verse, and “Luck Be A Lady” -from his 1955 musical “Guys And Dolls” where it was sung by… Marlon Brando!

Both of the songs are worth listening to on this all over the place odds and sods that never comes close to coalescing into an actual, you know, artistic vision.

It isn’t the fault of Frank’s singing, he is in fine voice and he seems preternaturally of the weakness of the material he is performing, and he doesn’t perform swing as such, but middle of the road hausfrau   pop like the atrocious “Tell Her (You Love Her Each Day)”  -a cliche with no meaning, a song with no song, and Frank is smart enough not to oversell the song: it couldn’t withstand a big blast. It is still terrible, the entire backing chorus should be told to shut up. Not once, but on every damn song.

Again, it’s Sinatra, so if the American songbook is in the doldrums Sinatra can still improve everything he touches but he can’t improve it enough, he gives enormous grace and startling immediacy to the songs but you don’t want to hear that awful, searing and blowing orchestration, definitely you want nothing to do with the backing singers.

Before you count Frank out, his very next album, in the same year, will be a masterpiece and maybe his best of the decade.