Simon And Garfunkel And Music To Comfort Yourself During A Pedantic 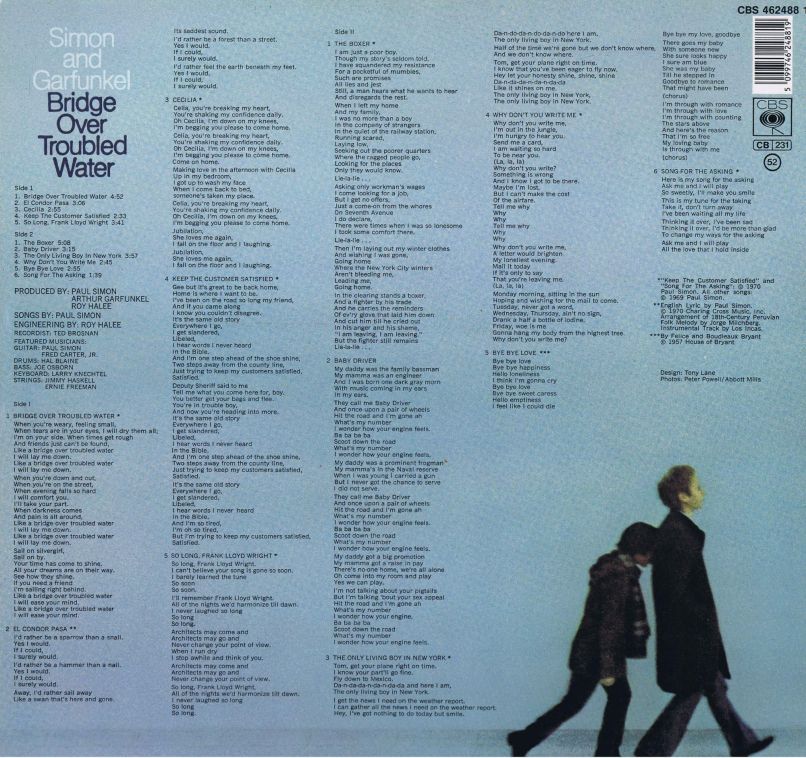 (I wrote this back in April of 2015, but its truth remains not just for illness but for insecurity, for fear, upset, and a loss of any control. In other words: it is true of today. And look no further than this weeks Top Ten Singles (here) for what I consider absolute proof that kids are freaking out as well… -IL)

Nothing takes us back to childhood faster than feeling unwell. I have a cold and I’m busy at work so I can’t really nurse it, and so I work through it because, in the end, there is no real choice. But more than ever, there is this urge to escape into the past, into a certain time and place and sound. For me Simon And Garfunkel’s Greatest Hits and Bridge Over Troubled Water are comforting, they take me to a place where the dysfunction of adulthood, the being a man of being a man, didn’t exist.

People react to illness through either embracing people or withdrawing, and that might have as much to do with options as choices. I withdraw but even if I wanted to be embraced I’m alone, so I can’t be. Illness is both the closeness to death and also the consistency of time passing while it doesn’t actually do anything; the being outside life and inside time which isn’t functioning correctly

That’s a great secret to life, because we are finite things, we’re like butterflies, or pop music, ephemeral beings, born to be gone, we feel time when in fact, in a very real way, time does not exist: sometimes when we are sick, time stops existing. We decay but time remains this other thing and we are only the tiniest part of it, time isn’t consciousness, time is beyond consciousness, time doesn’t even need consciousness (though consciousness needs time) (geez, I better feel better soon), so when we are sick, or when we are in an alcoholic stupor (which is very similar), hours turn into days turn into weeks and all we can do, is watch it pass, we open our eyes it is ten in the morning, we open them again and it is 3am a day and a half later: what has happened? Where are our friends and family? They’ve gone, they’ve given up, while we are adrift.

Like illness, even as I work myself through being ill, even then, I have “Homeward Bound” playing softly in the background and I am not entirely here, I am in two places and in no place, I’m floating above and looking somewhere, I don’t need to concentrate, I feel somewhere between a memory and an hallucination. I am fourteen years old, my father is in and out of hospital (he will be dead in 19 months) and I am on holidays from my boarding school in Brummana, visiting my sister in Helensburgh, near Loch London. Her, her husband, her two children, a friend of the family my age, and girls, always chasing after girls, are spending the summer together. It is late afternoon on a Sunday in the summer of 1972 and I am in the backseat with my niece and nephew, and it is perfect, Simon And Garfunkel on the 8 track, all moment stilled like the breeze wrestling me away, holding me steady, all the concerns of age, I couldn’t imagine them if I tried. Simon and Garfunkel harmonies, high and low and together, and I couldn’t have thought of discussing Everly brothers, sound didn’t trigger other sounds in my mind then as it does now, there is nothing to think about and nothing to worry about; within this strangely calm world, I was young and death hadn’t arrive as emphatically as it would. The world had the smell of trees, of lawns, of winding suburban roads taken slowly, no hurry to get home, no fear.

So as illness takes me down yet I can’t, I don’t have the time, to be taken down, so somewhere I am in both places, three places somewhere I am ill, somewhere I am working, and somewhere I have drifted back to a late sunny afternoon. And all three are listening to “The Only Living Boy In New York”.