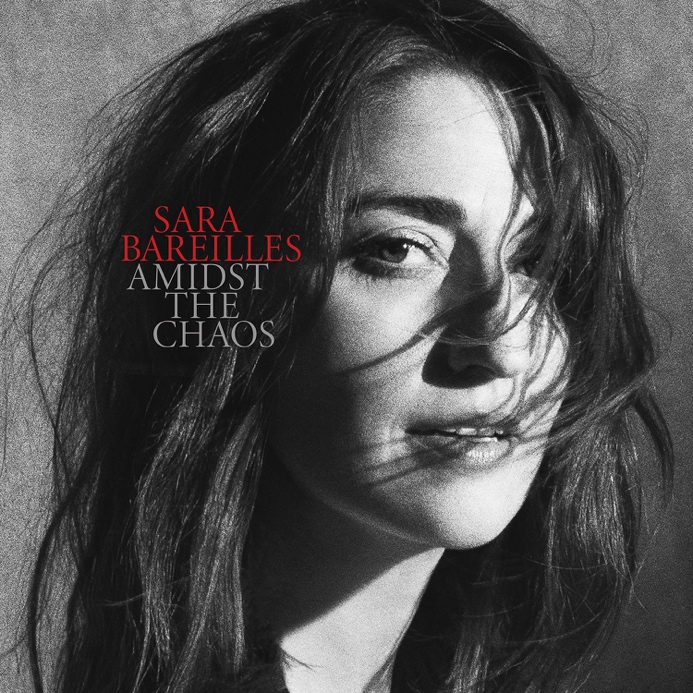 SET TO PERFORM ON SATURDAY NIGHT LIVE THIS SATURDAY APRIL 6

WILL ALSO BE APPEARING NEXT WEEK ON GOOD MORNING AMERICA, THE ELLEN DEGENERES SHOW, THE LATE LATE SHOW WITH JAMES CORDEN AND THE TALK

Grammy®, Tony® and Emmy® Award-nominated singer, songwriter, actress, and author Sara Bareilles unveils her new album, Amidst the Chaos [Epic Records]. This stands out as her fifth full-length and first collection of original material since 2013.

Helmed by legendary Academy® Award-winning producer T Bone Burnett, the album boasts a series of fan-favorite singles such as “Fire,” “Saint Honesty,” “No Such Thing,” and “Armor”—which Variety dubbed “exuberantly feminist.”Not to mention, she continues to attract widespread acclaim. In an in-depth profile, Los Angeles Times fittingly described the record as “raw” and “stripped down.” She also recently appeared on an episode of Carpool Karaoke alongside none other than Tony® Award winner Ben Platt. Additionally, she just wrapped up a packed mini-tour with sellouts everywhere and hosted a New York Times Talk.

Check it out HERE.

Amidst the Chaos represents Bareilles at her most exposed, engaging, and enthralling. Intimate piano and poetic lyrics comprise an emotional journey throughout these twelve tracks. “If I Can’t Have You” borders on simmering soul. Elsewhere, “Poetry By Dead Men” evokes the spirit of a literary opus. Everything culminates on the poignant and powerful ballad “A Safe Place To Land” [feat. John Legend], which highlights her range alongside the iconic crooner.

This week, Bareilles launches a full-scale television takeover. On Saturday, April 6, she takes the stage for a performance on Saturday Night Live followed by Good Morning America April 8, The Ellen DeGeneres Show and The Late Late Show with James Corden April 10, and The Talk April 12. Be sure to tune in!

Sara Bareilles emerges with her most impassioned, inimitable, and important body of work yet Amidst the Chaos.

2018 marked yet another landmark year for Sara. Among numerous accolades, she co-hosted the Tony Awards®, received an Emmy® Award nomination for her role in “Jesus Christ Superstar Live in Concert,” as well as a GRAMMY®Award nomination for the “Jesus Christ Superstar Live in Concert” soundtrack and garnered the Songwriters Hall of Fame’s Hal David Starlight Award. She also teamed up with Apple as an executive producer for “Little Voice” a 10-episode series, which she will create the original music for.  This continued an impressive run of music and creative projects. 2013’s Blessed Unrest would be nominated as “Album of the Year” at the GRAMMY® Awards. Shortly after, she penned the music for the Broadway hit, Waitress, for which she achieved her first Tony® Award nomination for “Best Score” and a 2017 GRAMMY® nomination for “Best Musical Theater Album.” She also made her Broadway acting debut in 2017 by stepping into the lead role in Waitress.