Same-Day Antigen Screening For Concerts? Could It Work? 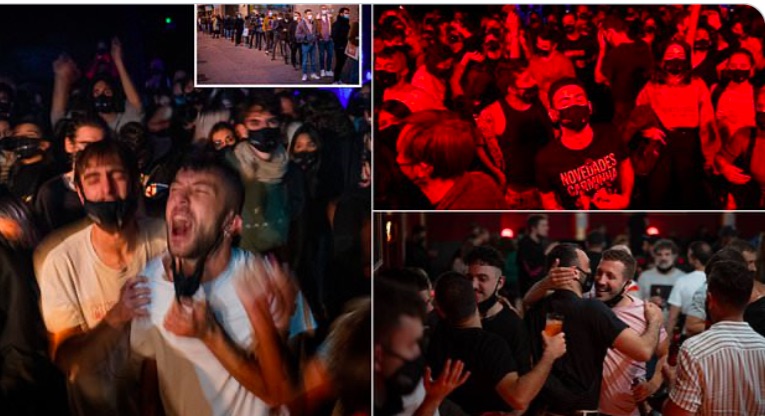 Everyone is missing live music, and we know it’s not coming back anytime soon. A scientific experiment was done a few days ago in Barcelona, Spain, in an attempt to evaluate the effectiveness of same-day coronavirus screening. Last Saturday, more than 1,000 Barcelona residents gathered, and after passing a COVID-19 screening, 500 of them were randomly selected to enjoy a free concert inside Barcelona’s Sala Apolo. The 500 ones who didn’t get selected were probably very disappointed, but, as the control group, they are very important in the experiment.

Inside the theater, people were still wearing face masks and used hand disinfectant, but social distancing on the concert floor was not enforced, and people enjoyed a 5-hour music festival of rock groups and DJs, while dancing, getting very close, and even hugging each other. Masks were even off in the upstairs bar, and the atmosphere must have been really surreal after 9 months into this pandemic.

The purpose of the study was to see if there was any contagion inside the concert hall despite the screening with antigen tests. The advantage of an antigen test is that it can produce results in 15 minutes, using a nasal or throat swab to detect a protein that is part of the virus. According to UC Davis, these tests are particularly useful for identifying a person who is at or near peak infection, but they can be less accurate than PCR tests which nevertheless require more time

‘I really, really missed going to concerts, above all to hear some rock ’n’ roll,’ 56-year-old Carolina Rius said. She was very happy to be part of the study, ‘I don’t feel like a guinea pig. I feel like I am taking a stand. The world of culture, and above all the concert halls, are having a very bad time of it and I don’t want them to shut for good. And if they end up choosing me in the draw to go to a concert, that will be the cherry on top.’

The problem is that Spain has been hit very hard by the COVID-19 crisis and according to a recent study, 1 in 10 residents has contracted the virus so far while more than 48,000 deaths have been reported.

Still, the craving for live music is so strong that people are willing to take some risk. ‘This is not a party, this is a scientific study,’ Dr. Boris Revollo, the virologist who designed the study’s protocols, told The Associated Press. He thinks that this sort of same-day antigen screening for concerts and other large events could be a powerful tool to help make large gatherings safe until enough people are vaccinated. It will take some time until vaccines reach the entire population, and people want to party no matter what.

Participants of the study will return next week to be tested again, and scientists will see if an asymptomatic person with the virus could have passed the initial screening and if there was any spread in the population.

I have no idea which artists were performing – I have only found this video where you can see one of the bands – but I think I would have passed. This is not a risk-free experiment as you can imagine, isn’t it what they were more or less doing at the White House? Weren’t they tested every day and it failed miserably? I know the president and his entourage weren’t wearing any masks, but looking at the photos of these Spanish people, we sort of have a similar situation.