Sam Huber And The True Groove Allstars At The Bitter End, Monday, May 6th, 2019, Reviewed 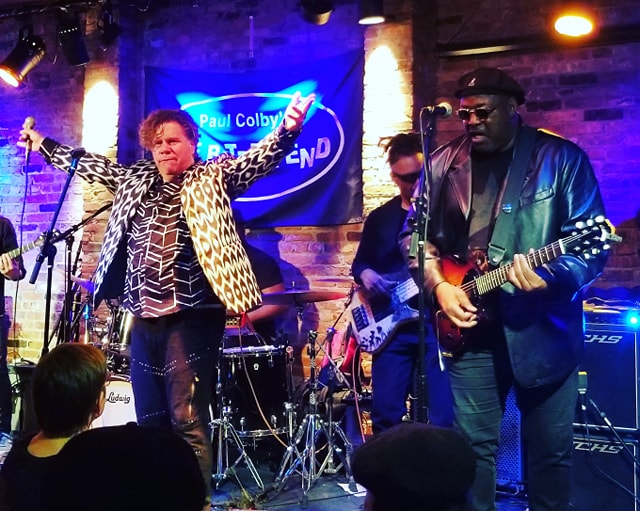 The outrage machine was in full swing this a.m. as a CNN headline made the rounds.  “How Black Will the Royal Baby Be?”  An apparent fumble in the control room reset the racist dial to 1919.

So how white is Sam Huber?

Finnish white.  From those northern lands famous (well, sort of) for fascist speed metal, Sam bounds out like a bolt of Adderall and onto the small stage of the Bitter End in the heart of Greenwich Village with a joyful funk and soul.  By the time we swing into to the second number, “Plastic Lovel” has me grinning from ear to ear.  These were mostly covers by various artist reinterpreted but the original piece, “It’s Complicated,” arranged by Tomas Doncker, had me up and out of my seat.  Where does this energy come from??  Not going to lie, from my initial quick look at YouTube earlier in the day, my first takeaway was this guy looks like a four pack a day smoker and I mean that in the best way.  Don’t let a brief glance deceive you, my friends.  Sam Huber has a Buster Poindexter showmanship and all encompassing energy that truly belies those four packs.  Must be that socialized heath care, but that’s another conversation.

An interpretation of “If It Makes You Happy” by Sheryl Crow has an easy but not simplistic feel. Sam pulls the heart up and out of that song, and makes the piece much deeper than I had ever given it credit for.

A lovely surprise of the evening was George Harrison’s “Isn’t It a Pity,” spurred by the urging of Sam’s mother, “Why don’t you do more nice and soft songs?”  Moms are always right.

Bob Marley’s “Could You Be Loved” brought upon stage Hawk, who delightfully “toasts” to the music and with Sam Huber, Tomas Doncker and his True Groove All-Stars, you could see the chemistry of fun and connection between the musicians on stage, and for an audience member, this makes it all the more special.

“Bright Life” ended the evening.  “Everybody wants to have a bright life” moved me, I’m not going to reel it in, that’s a great song.  I came to New York two years ago on faith, and I get to do cool stuff and see cool things.  Everybody wants a bright life, but we have to be fearless, “a chance to be part of something bigger,” that song spoke directly to me. Thank you, Sam Huber.

‘his friend got it & became impotent’