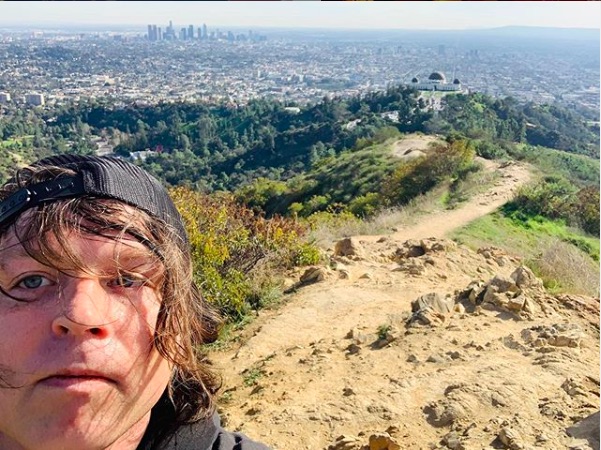 It seems that Ryan Adams is doing a lot of effort to keep in shape, if you look at his Instagram account – which allows comments by a very limited amount of people – you will notice a lot of photos of nature trails with views of the Griffith Observatory and the Hollywood sign. He is apparently hiking all over Griffith Park on a regular basis, crisscrossing all the paths of the largest park of Los Angeles, and looking at the sentence he is writing under the photos, he is taking this physical exercise as a therapy or even a religious exercise. You can read quotes from the Buddhist teacher Pema Chödrön, ‘One can appreciate and celebrate each moment — there’s nothing more sacred. There’s nothing more vast or absolute. In fact, there’s nothing more!’ or simple realizations such as ‘One day at a time. One step at a time. Peace’… okay, Ryan has become a practicing Buddhist who runs errands on nature trails to find peace. Good for him, right?

However, according to certain of his comments, it’s clear that he still hasn’t put behind him the story that cost him a double album release, a tour, and maybe his entire career… and that’s quite understandable: ‘The reasons to stay alive, to stay present and sober in the moment is not to deny those that wish you harm their satisfaction.’ or ‘The real endurance test is not allowing myself to be depressed and feel hopeless.’ Let’s not forget that Joe Coscarelli, the New York Times journalist who wrote that famous article that hit Adams so hard, is still attacking the rockstar on Twitter, many months later.

However, Ryan Adams is not the only one jogging, I am used to running around the Silverlake reservoir every morning and I regularly see Phoebe Bridgers walking around the lake, with her silver hair and black hoodie, her headphones on her ears, and her eyes looking in the vague, avoiding others.

It’s funny to think that two of the antagonists of this sordid affair are both walking/running not very far away from each other, the reservoir is about 10-15 minutes away from Griffith Park Observatory, and it would be very weird (and awkward) to see Ryan bumping into Phoebe during one of his trail runs … But he is probably safe if he stays in Griffith Park.