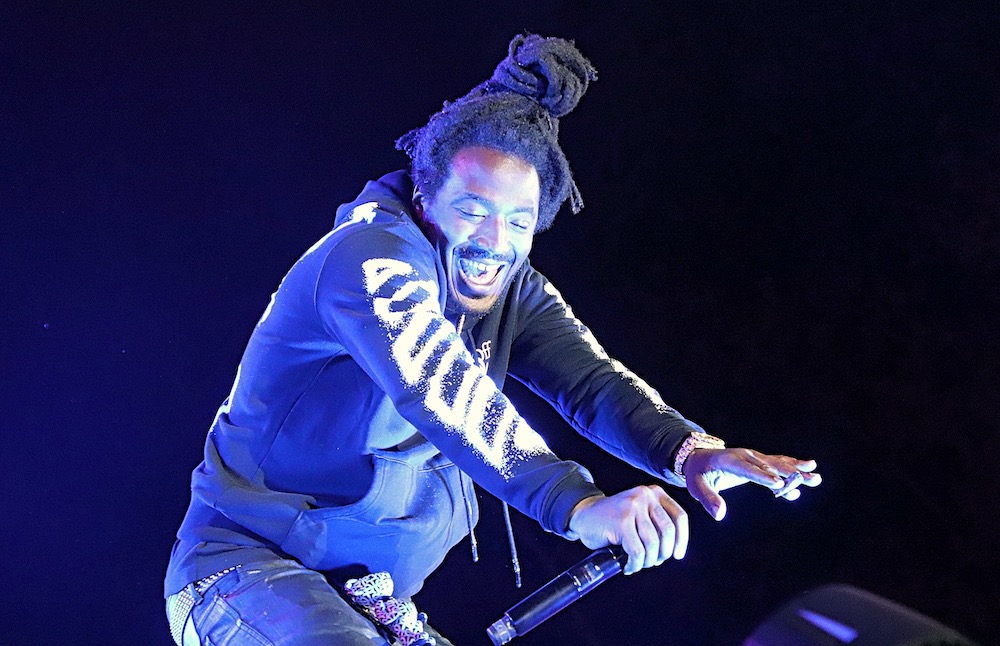 Mozzy at the Rose Fest

Yesterday, I went to a music festival, not a virtual one, not an event online, no, I went to a real, in-person music festival. Let’s ponder that for a second. After a year without live events, it’s something to reflect on for a few minutes. But life is very strange and funny, as soon as I was on the site of the festival, it was as if the long pandemic interruption had never happened, it felt very natural.

The first Rose Fest, an all hip hop/rap/R&B festival, was held at a very remote outdoors location, Oak Canyon Park in Orange County, and it turned to be the first post-pandemic live event I attended. The festival was COVID-compliant, with just one stage and booths with seats that were spaced out around the stage. The place never got too crowded – and I wonder if this was due to a limitation in the capacity of the site or to the fact that people were still hesitant to attend a live event? In any case, this gave a convivial and even familial atmosphere to the festival. It was also a generous endeavor since it was a fundraising event benefiting South Los Angeles’ Avalon Carver Community Center, a network center providing education services, home improvement services, and substance abuse services.

However, familial doesn’t mean small, the stage was big, everything around had the marks of an upscale festival, while the entertainment went non-stop before the time of my arrival (around 2 pm) till past 10 pm. When I say non-stop, I am referring to the constant divertissement between acts thanks to the hosts dancing, joking, and inviting people on stage. There surely was a lot of twerking performed by people of all sizes and the audience never got tired of it. That was a big change from your usual festival that makes you wait between acts with nothing but loud music: these people wanted to have fun and they did.

When it comes to rap and hip hop, I feel completely ignorant, there are plenty of artists I have never heard of, and here I was, at a festival celebrating the genre, blending big stars with emerging artists. Me? I was discovering everybody.

The lineup was massive, but the sets were short, no more than 10-15 minutes each, so that I managed to catch more than 20 acts, from local to national talents. Honestly, I saw many more women than I would have expected, Stunna Girl, Marissa Ford, Kendyx, Whitney Reign, Day Sulan, Ry, and Rubi Rose dominated the late afternoon and evening, with an unapologetic girl power attitude.

With every act hotter than the next, women were even more captivating or satisfying to watch, as their acts were often more choreographed than the male acts. I would say that women had two models, they either wanted to be the next Cardi B or the next Beyoncé, they either were the outrageously sexy stripper, posing with the tiniest outfit (Stunna Girl) or were reinventing a grandiose and sensual choreography with dancers and confetti guns (Kendyx) or were even right in the middle of both (Ry).

Flashy Stunna Girl with her transparent latex coat and red underwear looked like the trashiest act of the day – she has a song ‘Runway’ that went viral, pilling millions of streams on Tiktok and Spotify – Compton’s own, Day Sulan, looked very pretty and sexy with unfiltered lyrics and unabashed confidence – she is the first woman of YG’s 4HUNNIG imprint – while Marissa Ford almost brought a romantic vibe with her flowers around her mic stand and Chicago’s Whitney Reign looked completely in charge of her voice and dance moves. Ry (Dope) was a little fireball, wearing a Bulls cropped shirt and tiny short, she had the sporty energy and the fun moves – her act was also complemented by abundant choreography – while other rising star and sister Kendyx performed a more R&B-oriented set with high vocals and a truly impressive dancing act with a floating sea of thin braids and a Beyoncé-ambition. Atlanta’s Rubi Rose was welcomed like a star – she is a girl in a red latex bodysuit with matching thigh-high boots in Cardi B and Megan Thee Stallion’s ‘WAP’ video – and she rapped with a perfect choreography of male and female dancers, twerking in front of iPhones, once again showing impressive stage confidence at just 23.

There were obviously plenty of men, but the stage got far messier as a rapper would show up on stage with another rapper, so that the acts became one long rap sequence, and since the set times and the order were not necessarily respected, the long afternoon turned into a complicated guessing game for me. Rappers all have a unique style, it was just difficult to assimilate so many of them in just a day, from Charles Anthony to J Legras, to DW Flame, to Jimmy Bolt, to Black Fortune, to Yoppa, to Ash10, to 1TakeJay, to Singer Slim, to FloatLord… my head was spinning with their fast flows, more or less sinister beats and stage antics – Black Fortune was a ninja and Yoppa a climber. And if DW Flame or 1TakeJay were one-guy acts, 6, 8, 10 (?) people finally showed up on stage during their sets. But I almost forgot, during this full day of hip hop, an act called Heavenly Trip To Hell gave us a good set of loud trashy metal and that was incongruous and hilarious at the same time.

Mozzy was the final headliner, the obvious star of the night. I had heard of him because he recorded with YG and YG’s anthem ‘FDT’ was, with NWA’s ‘F**k the Police, the obvious soundtrack of the Black Lives Matter protests of this summer, but that was about all I knew. Mozzy had a sort of nonchalant flow and a raspy voice, his wordy rap songs were on every lip of the people around me, and this looked terribly sincere and personal. He was joined on stage by Eric Bellinger for a song, and many other people a bit later, while he always looked humble and unassuming, holding his pant, and abundantly smiling, disappearing behind the smoke of his joint. This was an unexpectedly long day for a first post-pandemic thing, but it’s good to be back. 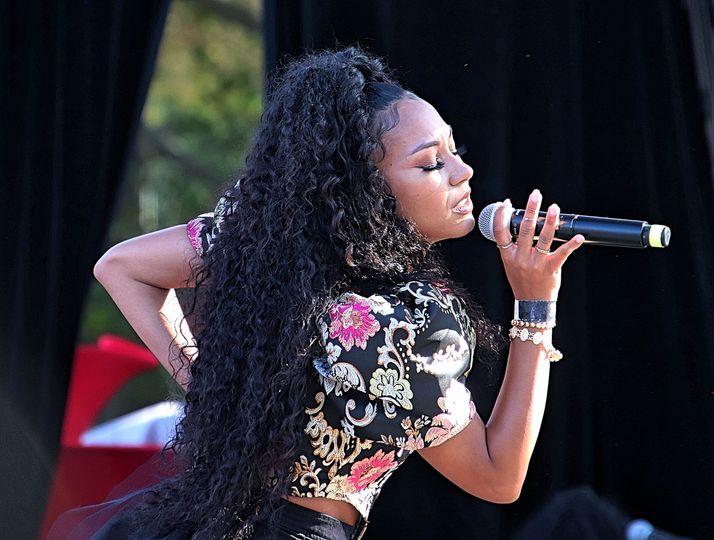 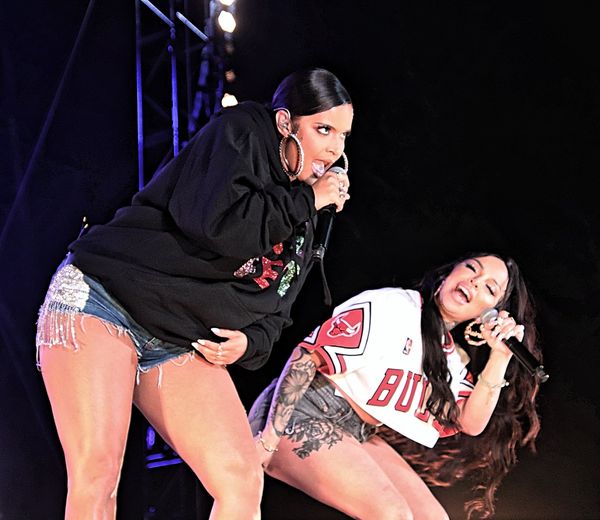 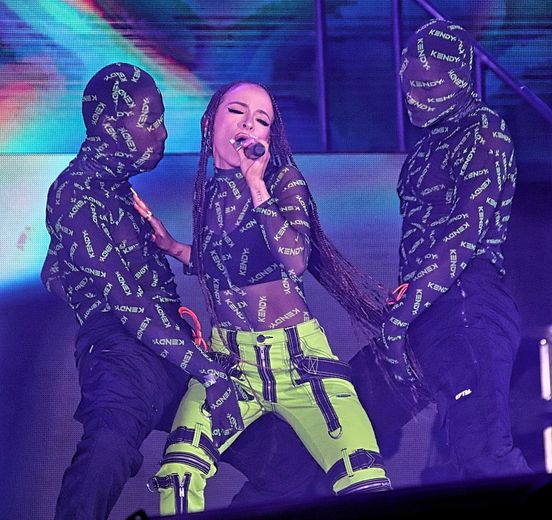 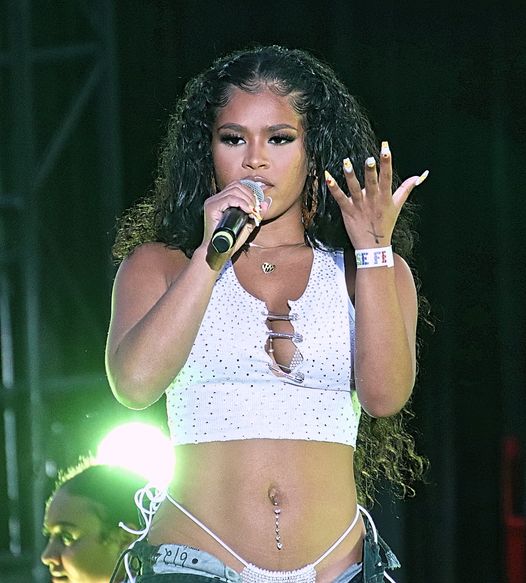 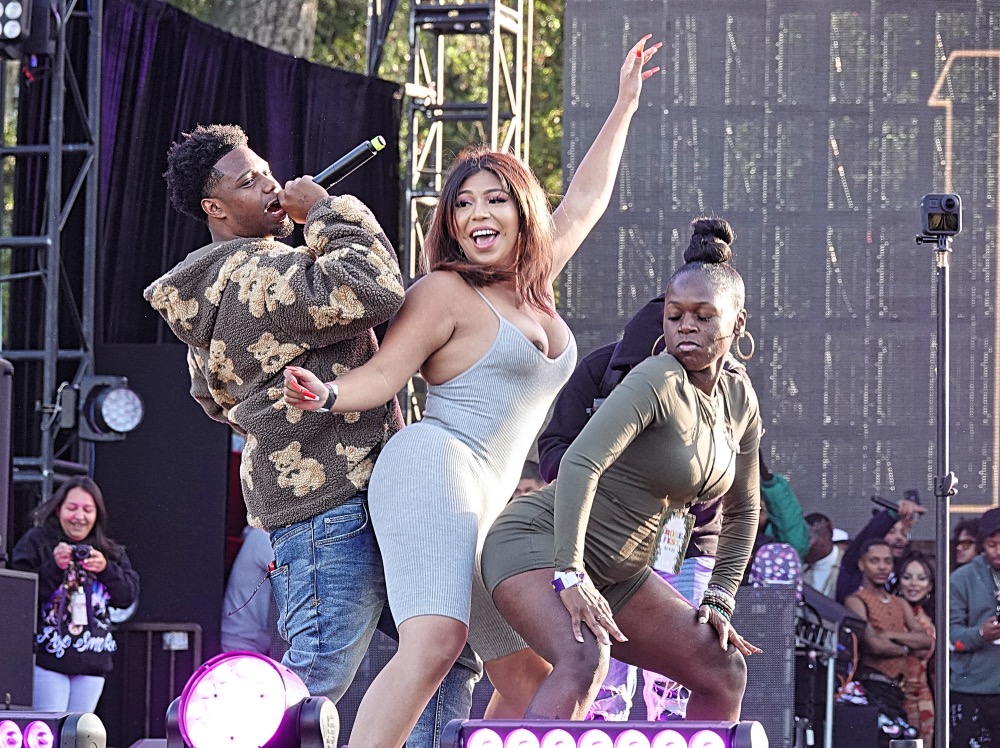 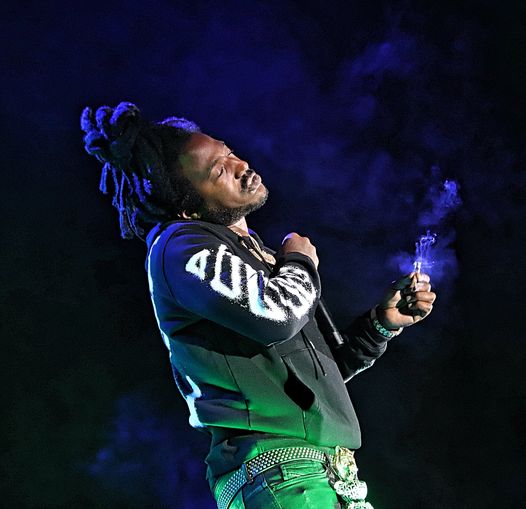 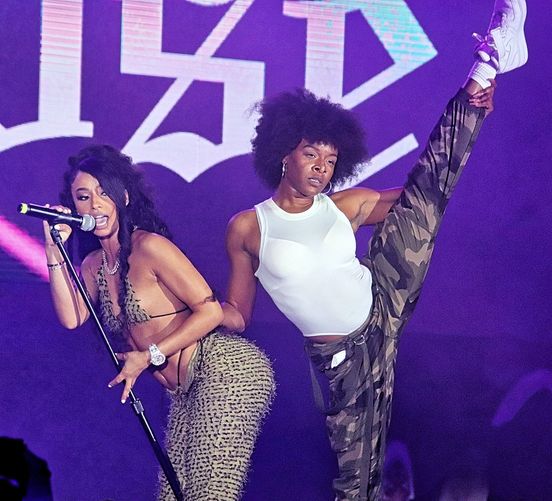 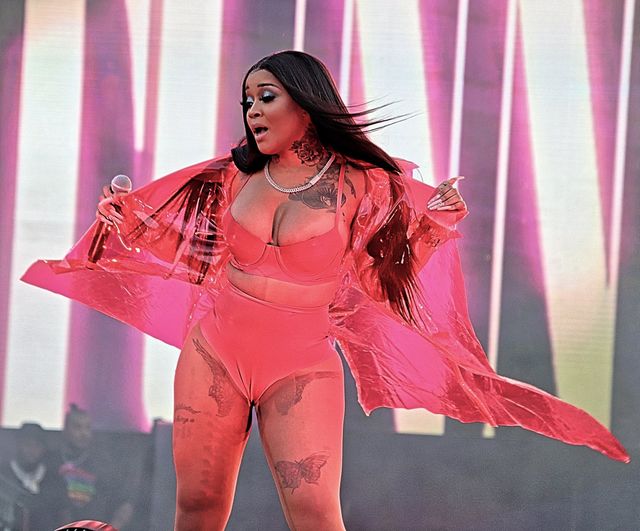 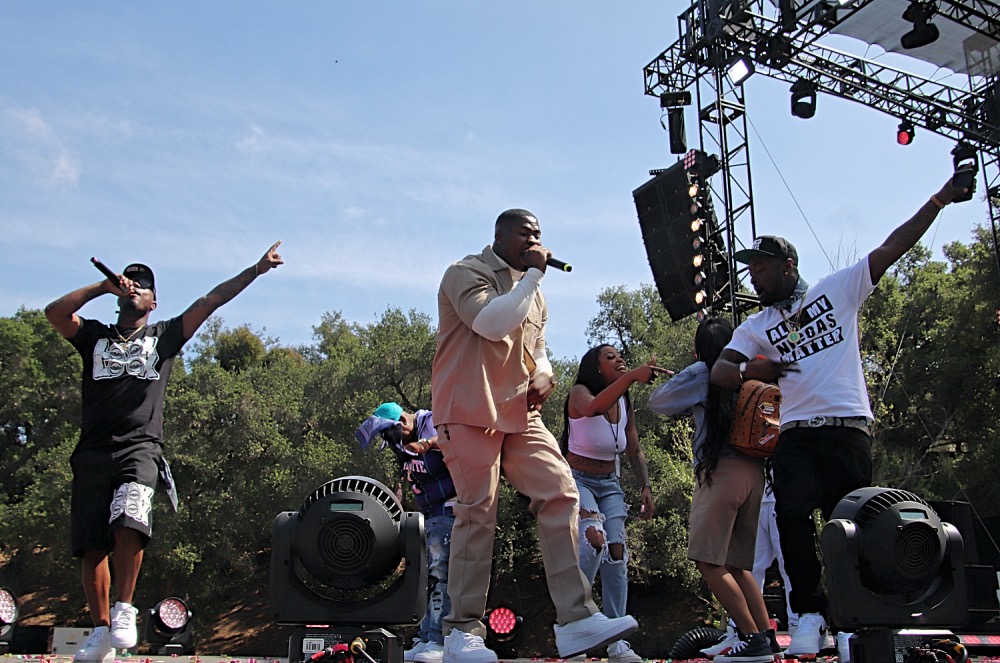 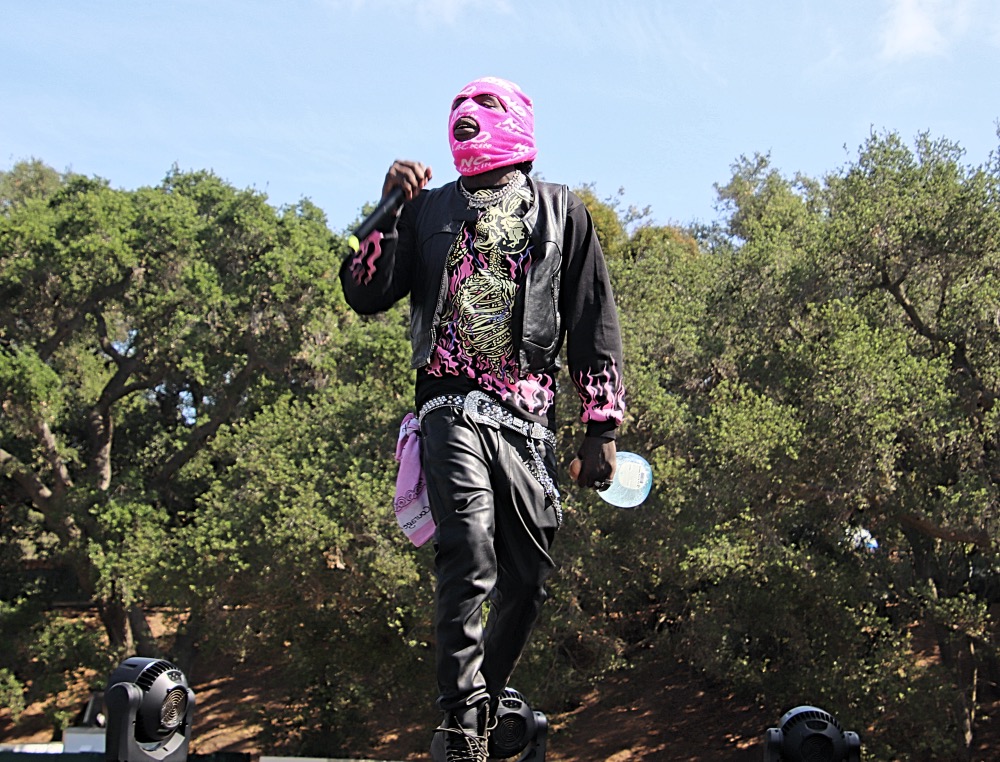 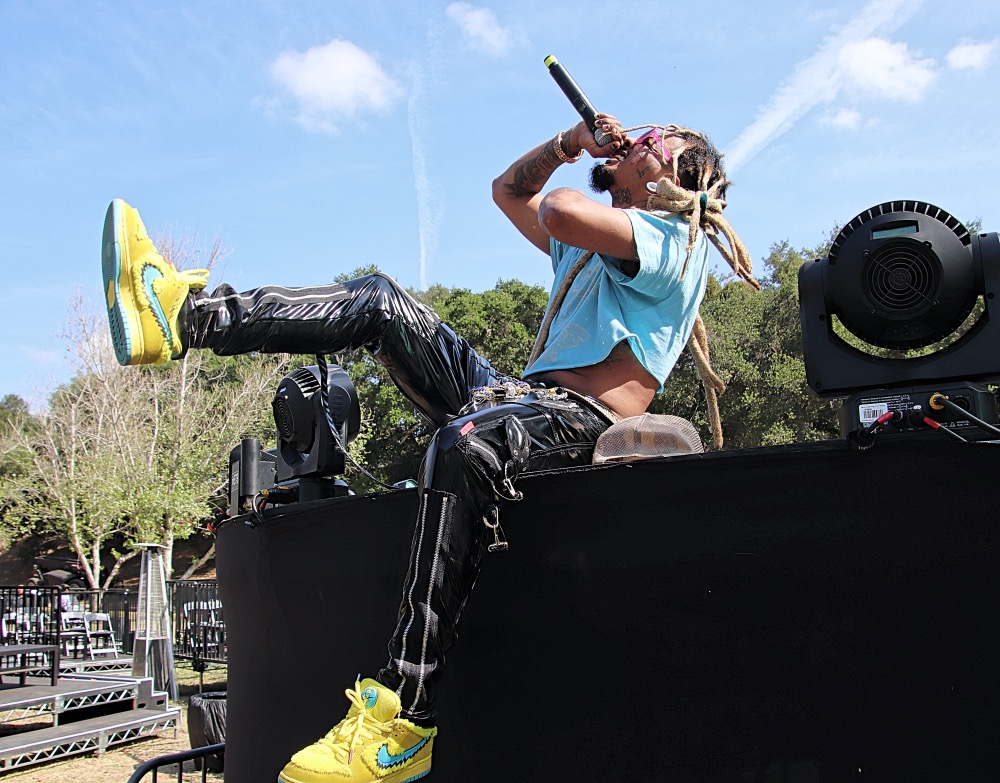