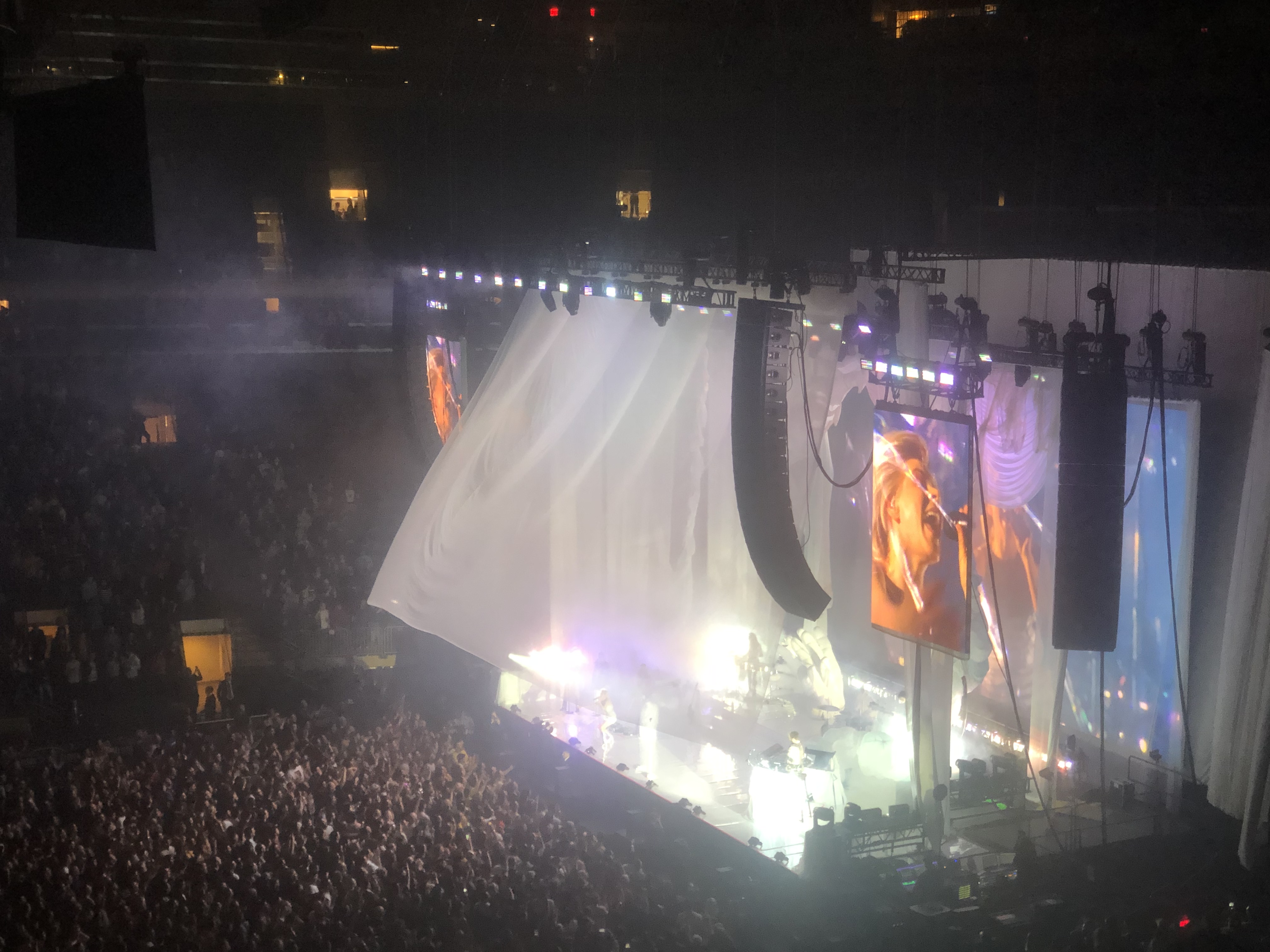 The climax should have come at the end of the main set with a shattering version of “Tell Your Girlfriend,” that should have been the one place above all others where Robyn was unreachable, or maybe two songs earlier when the entire audience, handed the keys to the beemer to sing “Dancing By Myself,” flooded the world’s greatest arena with pure joy… but no. Robyn, like one of her greatest influences Michael Jackson, is about dance, and between two techtronic, steely 808’d remixes, “Love Is Free” and
“Don’t Fucking Tell Me What to Do (The Mekanism Remix)”,Robyn had the sublime moves of a sex machine and an ecstatic streamlined goddess, humping the ground, shaking and spinning between robotic and all out disco fever paradise garage. Robyn threw herself across the stage but not with abandonment quite: great art requires great self-control as well as huge amounts of practise, the price of the freedom to move with so much physical integrity is having  complete concentration and muscle memory, so you don’t have to think: the reward for one of the best moments of the year was freeing her audience to adore her. It was the best dancing I’d seen since not Chris Brown at Barclay Center, but the Twyla Tharp retro at Joyce Theatre.

The Swedish Queen of Pop is in a line that goes back to Abba.  Robyn is a showbiz kid, born in a trunk and out on the road with her parents experimental guerilla theatre group, doing weird stuff shows. Once upon a time they performed a car crash in slow motion on the streets of Stockholm where the young child, one of her earliest memories, watched this awesome piece of theatre of the real. On the road, in a van, lots of music was listened to, especially 1960s soul as well as glam King David Bowie. The influence on Robyn was that she worried melody but sang off beats, just like her hero Prince. Her mother got pregnant again when Robyn was seven and taking two children on tour was too much so Robyn entered a short lived normal life that, unfortunately, ended when she was eleven and her parents had a very acrimonious divorce. Robyn felt traumatized by it and she wrote her first song “In My Heart” about the break up. By the age of twelve she had written the theme song to a TV show and at fourteen was discovered by a Swedish pop star at a High School workshop and there was no turning back as she became one of the biggest pop stars of the first half of the 10s. But the death of a friend sent Robyn spiralling (here) and there was an unconscionable eight year break between 2010’s Body Talk and 2018’s superb Honey: the latter album so great it should have put her straight back to the top of the charts… and didn’t, not really, the title track didn’t hit and it hurt the perception on an artist whose fans had aged from being in their twenties the thirties, essentially she skipped on a generation. Their loss, really.

Kindness opened with a half hour set DJ set, Kindness has an excellent new song (featuring Robyn -Robyn ended the night with a different Kindness song) “Cry Everything”, MCing was Bronze Goddess and it (not sure of the desired pronoun) was a fun center of attention and can dance very well. Kindness’ highlight was a mix of two “thank u, next” mashed up at different speeds, making the song fresh again. Channel Tres, who also has a great single, “Brilliant Nigga,” recently release, is a rapper with a better than average ear for beats; he had two back up dancers to add to his back up tapes, and the Compton native (I guess if the cops don’t kill ya they let you become an entertainer) is an arty, strange and uber-masculine smarty. At 20 minutes, the set was too short.

The show wasn’t perfect: Kindness came out again and they shouldn’t have, if Robyn wants to start the show at 7pm, come on stage at 830pm, the extra DJ set made a very good vibe a little boring. Robyn did arrive at 9pm onto a beautiful creamy colored stage like Morgan Freeman’s heaven in “Bruce Almighty,” and played hide and seek with us, and didn’t remove a gauze veil till six songs in. “Honey” we knew would be great but it was “Indestructible” that put me back on my heels (for the second time, I copped to it in a 2011 live review here) off Part Two back in 2010, she sang it to a standstill. And then a “Hang With Me” like a breath of light (I know) on the proceedings and then, and this is the point, I’ve seen Robyn a number of times and whenever she gets to the dance mix stuff my attention wanders and once I realized “Beach2k20” was gonna kill  it became clear this would be a great night.

Robyn, in a glittery and tight white dress, looked stunning, but after “Be Mine!” she disappeared to leave Theo Canham-Spence to perform a solo dance, and reappeared in a red pantsuit, a little meh. From here to the third mistake of the evening, a weak “Trust Me,” first song of the encore, she could do no wrong. Robyn gave herself completely to the beats, to the rave aesthetic, and to her audience. Her energy level was insane, and she can really, really dance and really sing, her back up band are somewhat anonymous but not in a negative way, they are like assistant chef’s working on a souffle.

Robyn isn’t a hedonist, not quite, she works from seeds of emotional doubt outward and what appears to be self-evident by the numbers perfect pop has kernels of sadness that deepen the impact on song after song. The decision to record “Dancing On My Own” and the way in which Robyn made it her own is telling. The song, written by Adele producer Paul Epworth and Adele herself, was released in 2010 -a year before Adele broke through in a big way, is typical Adele once you know she co-wrote it, but what interests Robyn is the dance portion, not the “on my own,” on stage she deals with healing through movement and the one thing that Robyn does, as a serious performer, is precisely that. In returning after eight years, she dealt with her grief by healing her and us. Us and her.