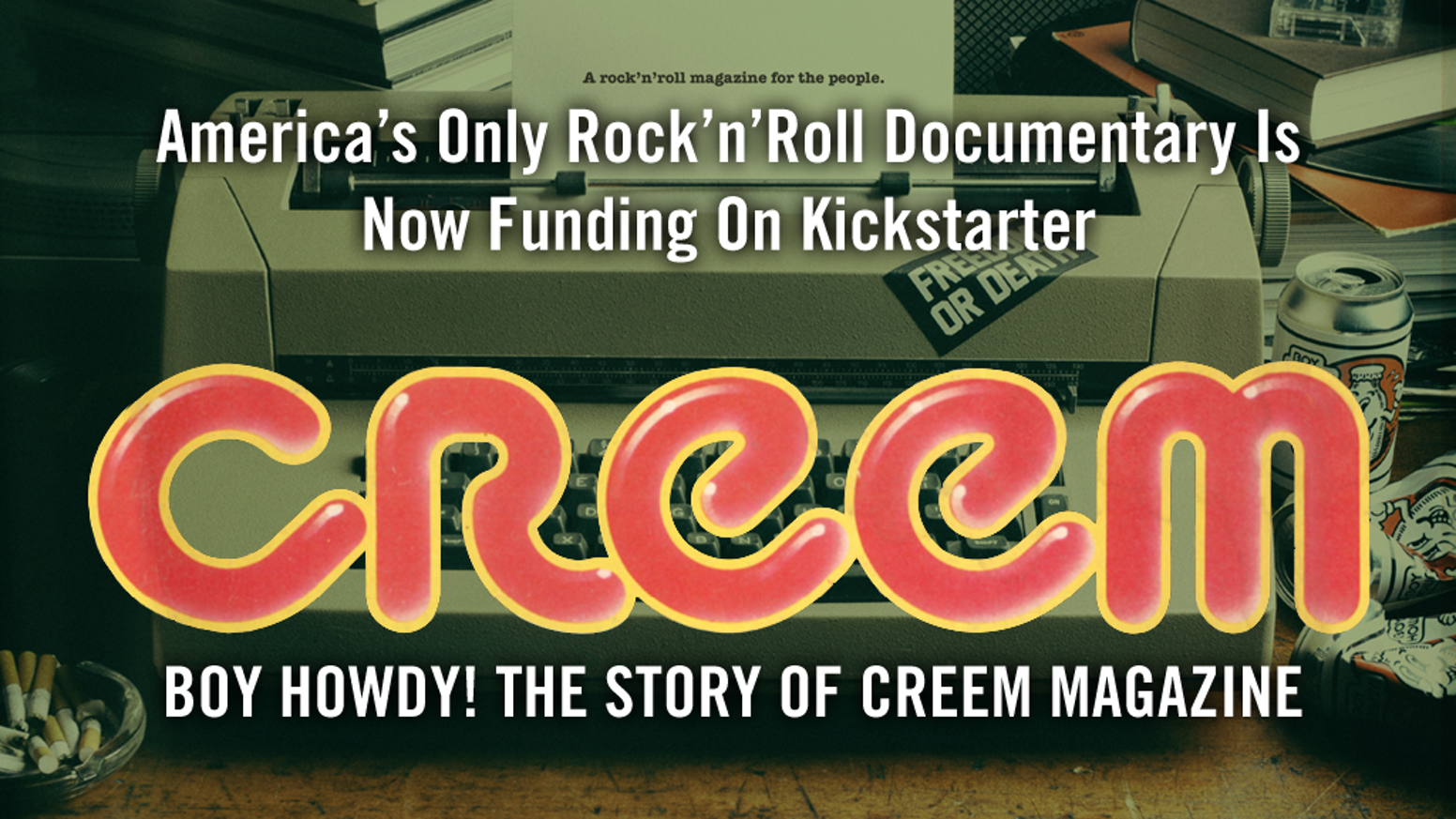 Lester Bangs describing Lou Reed in Creem Magazine, March, 1975, “Lou Reed is a completely depraved pervert and pathetic death dwarf and everything else you want to think he is. On top of that he’s a liar, a wasted talent, an artist continually in flux, and a huckster selling pounds of his own flesh. A panderer living off the dumbbell nihilism of a seventies generation that doesn’t have the energy to commit suicide. Lou Reed is the guy that gave dignity and poetry and rock and roll to smack, speed, homosexuality, sadomasochism, murder, misogyny, stumblebum passivity, and suicide, and then proceeded to belie all his achievements and return to the mire by turning the whole thing into a monumental bad joke with himself as the woozily insistent Henny Youngman in the center ring, mumbling punch lines that kept losing their punch.”

There were plenty of rock magazines on the newsstands during the 1970s and 1980s. “Rolling Stone” was always front and center, with its mission of mixing politics with pop culture and its goal to define the pantheon/pecking order of importance in the genre. As a teenage boy, I found the artists they gushed over the most – middle of the road, “serious” musicians like Eric Clapton and Jackson Browne – tremendously boring as both personalities and, with a few exceptions, on vinyl. “Circus” and “Hit Parader” chased musical trends with few memorable pieces and both eventually evolved into niche heavy metal magazines. “Musician” took a more thoughtful approach to its interviews and features, it had a fine wine aura compared to the fast food burgers and stale fries of something like “Circus.” And, then, there was Creem, which displayed its take no prisoners attitude in its tagline: “America’s Only Rock ‘n’ Roll Magazine.” Creem was a mixture of humor, passion, intelligence, and irreverence. If Creem magazine could have manifested itself into a human form, a young Steve Crawford wanted to be that person.

All of which is a long lead into the documentary, a project produced by onetime Creem scribe Jaan Uhelszki and J.J. Kramer, the son of Barry Kramer who originally published the magazine, and directed by Scott Crawford (no relation to this typist). It’s been a long journey from soup to nuts on this project, which started as a “Kickstarter” project in the summer of 2016 and is still pending final distribution. As one of the original investors in the project, I recently was given the opportunity to stream the film online.

Before I get too ahead of myself, some history. Record store clerk Tony Reay had the original idea for Creem magazine, the name derived from the rock band Cream, as a periodical for blues aficionados. Former head shop owner Barry Kramer became the publisher in 1969 and Reay was quickly deposed, as Kramer wanted a rock ‘n’ roll mag. The original headquarters was a crash pad among the urban squalor in downtown Detroit, near Wayne State University. Although the concept of rock ‘n’ roll was still in its teens in 1969, Detroit had given the world John Lee Hooker, Motown, the MC5, the Stooges, Bob Seger, Ted Nugent, Mitch Ryder, and George Clinton, among others, so there was a rich local culture for inspiration. Underground artist Robert Crumb dropped by the downstairs record store one day and a deal was quickly made that resulted in the iconic “Boy Howdy!” mascot/logo.

In the early 1970s, the headquarters and its complete staff was moved into a communal home/ publishing operation in Wall Lake, Michigan. A more formal office environment was established in Birmingham, Michigan in 1973. Dave Marsh was selected to be the first editor of the magazine. He was a nineteen-year-old Wayne State University dropout, who placed significant value on the political and sociological impact of popular music. The other primary voice was Lester Bangs, who viewed rock ‘n’ roll as simultaneously a great joke and a life saving one. While both moralists, Marsh viewed social change via disobedience and marching in the streets, while Bangs just wanted to toss cream pies into the faces of his oppressors. These differing viewpoints lead to, at least, one physical altercation between the high strung, uniquely talented young men.

In the meantime, Barry Kramer’s leadership style combined being a fatherly figure with frequent yelling and intimidation tactics. Creem was in many ways a group of misfits, often under the influence of street chemicals, who created their own universe that frightened and enamored polite society. The story of is told from the perspectives of musicians, including Wayne Kramer, Jeff Ament (Pearl Jam), Chad Smith (Red Hot Chili Peppers), Ted Nugent, Mitch Ryder, Peter Wolfe, and Michael Stipe, as well as Creem writers/contributors to include Roberta “Robbie” Kruger, Robert Duncan, Craig Karpel, Greil Marcus, Wayne Robins, Dave DiMartino, Ed Ward, Robert Christgau, Chuck Eddy, and Susan Whitall. Chad Smith captured the highbrow meets lowbrow aesthetic, summarizing that it was “Mad Magazine meets Esquire.” Michael Stipe had the most poignant take, “Most people want to fit in somewhere. Because of my otherness, because of my queerness, I was trying to find that gang. I wasn’t going to find it in my high school. I found them in Creem magazine.”

There are two major flaws in the documentary. One is that film is a visual medium. The magazine was a combination of photos and writing, so guess which one gets shortchanged? There is a lengthy segment on Creem “Profiles,” pics of rock stars posing with the imaginary “Boy Howdy!” beer, and on Stars’ Cars, a rather forgettable recurring feature of a rock star posing with a vehicle. There are segments on Lester Bangs being onstage with the J. Geils Band while typing and Jaan Uhelzski joining KISS onstage, in full costume and makeup. Meanwhile, important contributors to the magazine to include Richard C. Walls, John Mendelssohn, Richard Riegel, Iman Lababedi, John Kordosh (for Jehovah’s sake!), Sylvie Simmons, and Cynthia Rose are not even mentioned. Rick Johnson, who virtually carried the magazine on his stoned, Swedish back during the late ‘70s/early ‘80s is only mentioned for his hysterically mean spirited piece on the Runaways. In a silly segment, Jett recalled looking for Johnson in the Creem offices after his review was published. Johnson was a freelancer living in Macomb, Illinois at the time.

The second major flaw is the film only lasts one hour and fifteen minutes and doesn’t even try to be a complete history of the magazine. There is almost a five year gap between Lester Bangs leaving the magazine and the death of Barry Kramer, with no discussion of that era. During the early 1980s, the magazine had on its editorial staff at various times Susan Whitall, Rick Johnson (a temporary move from Macomb), Bill Holdship, Dave DiMartino, and John Kordosh. It was a tremendously creative timeframe, which way too often gets overlooked. To do so in a documentary about the magazine borders on the unforgivable. Also, there is a brief mention of the magazine being sold from the Kramer family to Arnold Levitt in 1986. Connie Kramer discusses that there was an editorial shift at that time, and it truly did become more tilted toward the concept of “college rock.” However, after making her point, the film mixes in images of several heavy metal oriented covers that occurred before the sale of the magazine, so there’s a bit of intellectual dishonesty in that sequence. There is no discussion concerning the controversy and legal battles over the actual ownership of the Creem name in the 2000s.

I am glad this film exists and that early key members of the staff were provided a forum to tell their story. (I did throw up in my mouth a tiny bit during the Ann Powers clips). It is not, as Rick Johnson once described a Blondie album, “the biggest bomb by a major act since Christianity.” It is also not what a definitive documentary of Creem magazine should be.

Grade – B+ (Although “Incomplete” is also an option)