Rammstein’s Till Lindemann: ‘I Hate Children’ 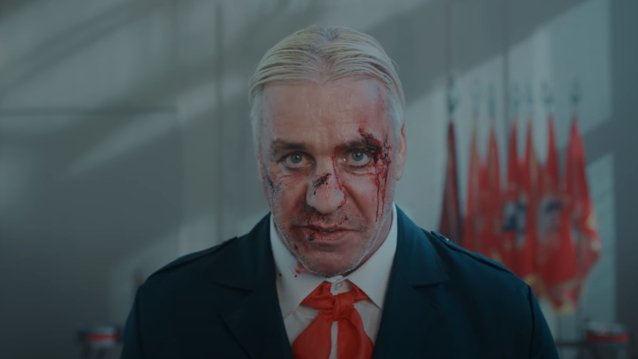 The Adolescents wrote ‘I Hate Children’ and Rammstein’s Till Lindemann just released ‘Ich hasse Kinder,’ so basically the same song, if you only consider the lyrics. I knew nothing about Rammstein, I had vaguely heard their name, but Ticketmaster and Goldenvoice keep sending me emails about their upcoming shows next year… ‘2nd show added’ the emails say… these Germans must be in great demand.

The new video for ‘I Hate Children,’ directed by Serghey Grey, is frontman Lindemann’s solo work, but it’s as shocking as Rammstein’s fans like it. Filmed in Moscow, the mini-movie is filled with fascist imagery, gruesome violence, gore images, spewed blood, kids being bullied, bodies being cut or sawn. It’s like Chainsaw Massacre with a Third Reich twist under Lenin’s regime.

As for the music, it is a bizarre blend of heavy metal and industrial operatic screaming; it’s over the top, brutal, excessive, creepy, and colorful if you like red and German lyrics. But it’s certainly not safe for children (remember he hates them) or for sensitive people. It’s a mini horror movie and it’s quite shocking if you are not used to gory films. Marilyn Mason’s work looks mild in comparison and there may be a reason why the comments of the video have been disabled.

And talking about controversy, in the past Rammstein have touched on plenty of radioactive subjects such as sadomasochism, homosexuality, incest, abuse, necrophilia, pyromania, cannibalism, and sexual violence. And they are not canceled? They actually got in trouble in 2019 because of a video for their song ‘Deutschland,’ in which band members were dressed up as concentration camp prisoners; it’s not difficult to see why it was heavily criticized by many people. In 2009, Germany had already banned Rammstein`s hit album ‘Liebe ist Fuer Alle Da’ from public display in stores because of its depictions of sado-masochism.

But I like the fact that they continue to push the envelope, and it’s impressive that this doesn’t prevent them to do a stadium tour in 2022. Another date was added for Los Angeles on September 24 (they also play on the 23) … and where is this happening? At the Los Angeles Coliseum, where else could they make a big display of their totalitarian military pyrotechnics?