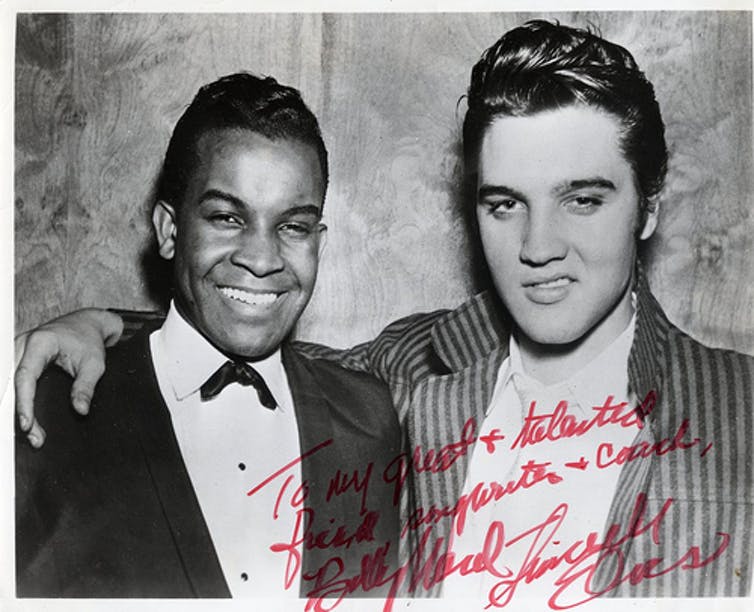 Elvis and Billy Ward of Billy Ward and his Dominoes (circa 1955). Williams Family photos

Besides the pandemic, 2020 will be remembered for the George Floyd and Black Lives Matter protests. This was the year when we constantly talked about racism, discrimination and this is not over. However, can we even compare the current situation to what was happening in the ‘50s?

Famous record producer, musician, songwriter, composer, arranger, and film and television producer Quincy Jones was interviewed by the Hollywood Reporter this week and he had a few things to say about racism. During his long career (he is 88), he has certainly met an impressive amount of famous people and has worked with the entire planet of music, from Sinatra to Michael Jackson to everyone in between. Just imagine a 70-year career!

When Jones remembers his time in Hollywood in the ‘60s, he mentions the ambient racism: ‘It was very, very racist,’ he says when talking about the producer of the movie ‘Mirage’ telling music supervisor Joe Gershenson, ‘You didn’t tell me Quincy Jones was a Negro.’

As shocking as this sounds now, I bet this was not unusual. Jones also recalls Truman Capote asking Richard Brooks, who was directing ‘In Cold Blood’: ‘Richard, I can’t understand you using a Negro to write music to a film with no people of color in it.’

But the most disturbing thing of the piece is his admission that he wouldn’t work with Elvis Presley. ‘I was writing for [orchestra leader] Tommy Dorsey, oh God, back then in the ’50s. And Elvis came in, and Tommy said, ‘I don’t want to play with him.’ He was a racist mother — I’m going to shut up now,’ Quincy Jones says.

I have never really looked into this but I was not under this impression, based on photos of Elvis with numerous Black musicians and what you can read here and there. ‘Presley would nevertheless publicly cite his debt to African American music, pointing to artists such as B. B. King, Arthur “Big Boy” Crudup, Ivory Joe Hunter, and Fats Domino,’ you can read on Wikipedia. The page goes on and on about Elvis’ recognition of Black artists and music. There is even this very anti-racist quote (especially for the time) attributed to Elvis: ‘The colored folks been singing it and playing it just like I’m doin’ now, man, for more years than I know. They played it like that in their shanties and in their juke joints and nobody paid it no mind ’til I goosed it up. I got it from them. Down in Tupelo, Mississipi, I used to hear old Arthur Crudup bang his box the way I do now and I said if I ever got to a place I could feel all old Arthur felt, I’d be a music man like nobody ever saw’… And this other one from Little Richard: ‘He was an integrator. Elvis was a blessing. They wouldn’t let black music through. He opened the door for black music.’

Plenty of these old and positive testimonies have largely contributed to the iconic image of the King that we are familiar with, the man transgressing social boundaries, attending Black churches and other Black events, promoting Black artists. But now Quincy Jones is telling us he was a racist?

But this is an old story. This Australian page examines many aspects of the problem, with numerous quotes from prominent Black artists such as James Brown, B.B. King and Sammy Davis Jr, all praising the King – Brown even called him his brother in his book and was very distraught when Elvis died. But a quote, allegedly attributed to Elvis during a Boston appearance – ‘The only thing Negroes can do for me is shine my shoes and buy my records’ – has largely contributed to the racist rumor. However, Elvis apparently never went to Boston and has always denied having ever said such a thing during interviews. The page goes through all the allegations, dismantling every piece, but you still have Chuck D’s lyrics for ‘Fight the Power:’ ‘Elvis was a hero to most/But he never meant shit to me/Straight up racist that sucker was/Simple and plain/Motherfucker him and John Wayne.’

Sure, Elvis was the white rock star who stole everything from Black culture, but should we ignore all these testimonies from Black artists? Was Elvis a racist or are we still dealing with cultural misappropriation and resentment over decades of social inequities? In 2021 this declaration from Quincy Jones lands like another nail in the King’s problematic coffin.