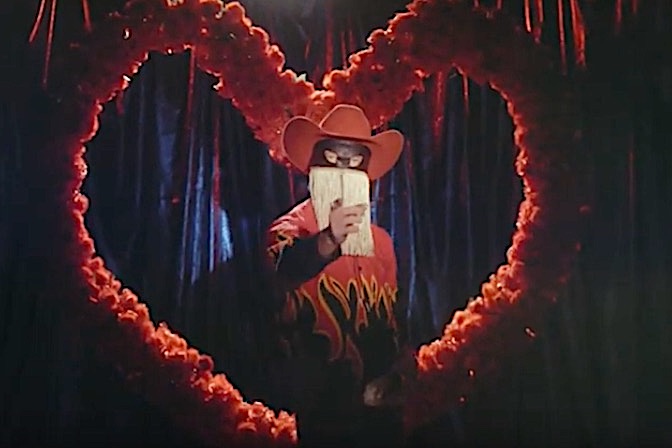 Orville Peck’s ‘Queen of the Rodeo’

Do music videos still matter? If streaming is king (Spotify has over 20 million songs!), YouTube still reigns and artists are still making videos in 2020. Orville Peck is certainly one of these artists, as he has just released an 8-minute-long video, ‘Queen of the Rodeo’, which premiered today on YouTube. Combining two songs from his 2019 debut album ‘Pony’, the video has the look and the aesthetic of a super-production, with cowboys, rodeo scenes, horses, roses and beauty (drag) queens.

Directed by Austin Peters, it’s a real mini-movie featuring our favorite masked cowboy crooning in a rodeo arena while beauty queens are getting ready for the contest. It’s all glitter and human sweat, powder makeup, fringe shirts, bulls riders, and big hair. Mid-movie, the future crowned beauty queen is in a bar watching a video of Orville Peck singing his song ‘Roses Are Falling’, in a very David Lynch-Blue Velvet sequence.

Famous drag queen performers Louisiana Purchase and Thanks Jem – whom the song ‘Queen of the Rodeo’ was written for – are part of the cast, while the entire movie looks like a cowboy chaps queer fest. As a matter of fact, ‘For all the LGBTQ+ and two-spirit community members working and performing in rodeos, ranches, and roadhouses across North America,’ can be read at the end.

The video obviously works as a charming little tale of subversion, putting the macho world of rodeos and cowboy right in the middle of queer-country, while Orville Peck’s impeccable croon is too good to not be taken seriously, especially when he serenades us in the middle of a heart-shaped rose garland.

This year, the masked cowboy has managed to be booked for both Coachella and Stagecoach, and will also participate to an impressive number of music festivals including Shaky Knees, Hangout Music Festival, Boston Calling, Bonnaroo Arts and Music Festival, Under the Big Sky Festival, Hinterland Music Festival, Osheaga Festival… Orville Peck is almost too hot to be true. Check out all the dates on his website.