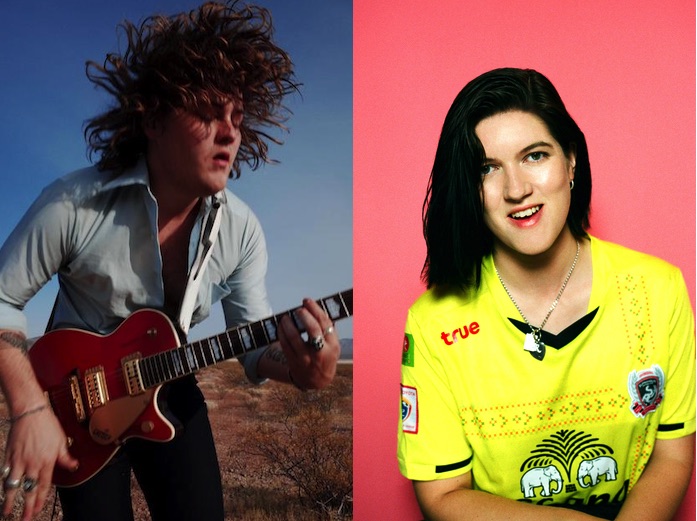 Here are the first press releases From October

Jessie Reyez – ‘No One’s In the Room’: Colombian-Canadian singer-songwriter Jessie Reyes has a voice and something to say, the song is a self exploration with her soulful whisper and powerful lyrics : ‘SOMETIMES I DON’T WANT TO SING NO MORE/SLIT MY THROAT AND TAKE MY MUSIC BACK FROM EVIL MEN/THEY CAN PUT MY BODY IN THE OCEAN/WHERE I CAN DIE WEARING A SMILE AND MAYBE FIND PEACE AGAIN’… ‘ a soul-searching about authenticity and individuality over a simple but captivating melody. ‘(Who am I when) No One’s In The Room,’ comes with this freshly uploaded, EmmaHiggins-directed video. This is a song off Jessie Reyes’s 2020 album ‘Before Love Came to Kill Us+’ released via FMLY / Island Records. ‘Months ago, I felt like I started questioning who I was,’ wrote Jessie, ‘if I’m living the life I’m supposed to and what’s keeping me from it. “No One’s In The Room” is a song about consciousness and life purpose.’

Bia – ‘Same Hands’: A rap song executed with ease and a hook on wordplay, while the JOÁN-directed video was filmed in Joshua Tree. Executed with Bia’s cool aggression, the story looks like a mini-movie that could be a blend of a colorful thriller and another Kill Bill. ‘Same Hands’ is the new single from Boston-born and Los Angeles-based rapper BIA, featuring Lil Durk: ‘Crushing up the drugs with the same hands that I fix to pray with.’ ‘The inspiration behind this song was no matter how you sin, you can still be close to God,’ says Bia. ‘Durk was the perfect fit for this song because he’s authentic and he brought the energy to match mine.’

Tawny Newsome & Bethany Thomas – ‘White Balloon’: A rock song with dark distorted guitars and wild female harmonies soaring into waves over fierce riffs and a sonic vibe from the ‘90s. ‘’White Balloon’ is about staking your claim and keeping your head in spaces where the thin veil of racism has long been lifted,’ notes Bethany. ‘I listened to the entire White Stripes discography in one long morning,’ adds Tawny. ‘Then I read a distressing story on twitter about white supremacist groups gaining traction through increasingly insidious online recruitment tactics. I did my (daily) calculation of how long it would take me to escape up the trail that runs behind my house if a hate group rolled up my road. Classic rock and roll anecdote, huh?’ It is the first single from Bethany Thomas and Tawny Newsome’s debut album, ‘MATERIAL FLATS,’ released via Fine Alpinist Records, on October 9.

Saunder Jurriaans – ‘All Just Talkin’: A folksy vibe with layers of pretty guitars and percussion wandering like the wind or a river and building a psychedelic dreamscape. The atmospheric track has a Devendra Banhart vibe with more reverb, and is lifted from Saunder Jurriaans’ recently released debut album, ‘Beasts.’ ‘I was thinking a lot about the Beatles, and unexpected ways of breaking out of song structure,’Jurriaans says. ‘I like the cinematic aspect of songs like ‘A Day In The Life’ where you go into this kind of chaos. It felt right.’ ‘Beasts’ is out now via Decca Records, and finds Jurriaans delivering a musically inventive and cinematic record while exploring deeply personal themes: the songs featured on ‘Beasts’ were written after a difficult number of years dealing with depression, and were written when he was coming out of that period.

Jeff Rosenstock – ‘Scram!’: A pure punk song with a hooky pop melody and a singalong shoutable chorus, but executed with such anger and urgency than the message doesn’t get lost. This is a song off Rosenstock’s fourth album, ‘NO DREAM,’ which came without warning in May, and was recorded  with Jack Shirley (Deafheaven, Hard Girls, Joyce Manor) at Oakland’s Atomic Garden. ‘It was feeling like a very personal record for me,’ says Rosenstock. ‘A lot of it was stemming from the anxiety I was feeling from the last two years, this existential crisis of wondering who I am.’ Rosenstock has found himself in a surprising position. As he puts it simply: ‘I didn’t expect to be doing well, in my life, ever.’ Two days ago, Jeff and his band performed the song ‘Scram!’ on Late Night with Seth Meyer, wearing face masks because we are still in the middle of a pandemic!

The Jaded Hearts Club – ‘I Put A Spell On You’: It’s a big-time classic and the Jaded Hearts Club have come up with their own version of the 1956 Jalacy ‘Screamin’ Jay” Hawkins ‘I Put A Spell On You,’ a song that has already been covered by many artists, from Nina Simone to Annie Lennox & Jeff Beck. Guitarist Graham Coxon (Blur) and Nic Cester (Jet) are on vocals and they are backed by a heavy thumping jazz-metal rhythm section also featuring guitarist Jamie Davis, Miles Kane (The Last Shadow Puppets), Matt Bellamy (Muse) on bass, and Sean Payne (The Zutons) on drums. It’s a supergroup decided to deliver original interpretations of lost classics, Northern soul cult hits and jazz standards.  The black & white video accompanying the song was inspired by ’60s Italian horror and shot in Italy by filmmakers OLO Creative farm, capturing a distorted black and white time-warp nightmare with Nic Cester as a cult leader brainwashing his disciples with mysterious voodoo spells. The song comes from their ‘You’ve Always Been Here’ album which will also feature other classics by the Four Tops, The Sonics, Marvin Gaye, Peggy Lee among others.

Romy – ‘Lifetime’: An upbeat synth-pop with an hypnotic dancefloor and emotional vocals by Romy Madley-Croft of The xx, floating above an Ibiza-club-inspired track. This is her first single produced with Fred again.. and Marta Salogni in London during lockdown. ‘Lifetime’ is a song about the dream of being reunited with friends, family and the ones we love, capturing the euphoria of being together again and, in her own words, ‘being totally in the moment and celebrating it,’ Romy said. The lyric video, created by designer Patrick Saville and animator Connor Campbell, brings some EDM fest/DJ vibes.

Aaron Taos – ‘Bloom’: A dreampop soundscape with a nonchalance à la Mac De Marco, poppy hooks and summery grooves. The song is a reissue along with ‘Birthday Boy,’ the debut album from emerging artist Aaron Taos. This follows previously released reworks of ‘Control’ featuring Lonely God and Heron John and ‘Loneliness’ featuring spill tab; this remix of his track ‘Bloom’ features eli. and Hojean. Taos notes,’‘Bloom’ is a track about forbidden love. In my case, my affection is for my friend’s sister but because of the context, we can’t act on it. The song serves as a confession about this underlying tension and me making the case to her that we should give in to our feelings. It’s the fantasy of letting our love blossom—a natural progression like the spring flowers in bloom. After describing my predicament, eli. and Hojean hopped on for the second and third verses to weigh in on their own experiences with this situation. The result is three guys singing their hearts out about forbidden fruit.’

Lake Street Dive – ‘Making Do’: A song about the current state of the world, a straightforward delivery addressed to common people, and a much needed but heavy subject served with a Dylan-style video. ‘’Making Do’ is about the world that future generations are inheriting. We are all concerned about what is happening to our planet, so the song explores what arises when we consider both our role in it and our responsibility to address it. Hopefully it comes through as a rallying cry to do the best you can with what you have,’ declared Lake Street Dive. The entire video features clips from fans and a cameo by Massachusetts Senator Ed Markey, co-sponsor of the Green New Deal, a congressional resolution that lays out a grand plan for tackling climate change.

Thunder Jackson – ‘Find Yourself’: Thunder Jackson has just released his highly anticipated debut album, and I could have picked any of the previous singles, from ‘Caroline,‘ to ‘Led Astray,’ ‘Guilty Party,’ ‘Institution‘… but the soulful ‘Find Yourself’ is a slow burning piece of anthemic pop with Thunder’s falsetto over a pulsing synth, that grows into a emotive and euphoric bombast with glitter. Thunder’s vocals soar with a blend of confidence and vulnerability with flashy visuals. All songs on his self-titled album were recorded in Los Angeles and written and produced by the artist together with Thunder’s co-conspirator, British songwriter/producer Pete Lawrie Winfield (Until The Ribbon Breaks).